The most interesting Archaeologist discoveries of all time - Mundo EN
Omg

The most interesting Archaeologist discoveries of all time

We, humans, might think we have discovered all, but there is always many things and mysteries to solve. This is why here are some fascinating archaeologist discoveries you must need to know.

Archaeologists have made many important discoveries in the last years, revealing and giving us more information about our past and ancestors, so check them out. 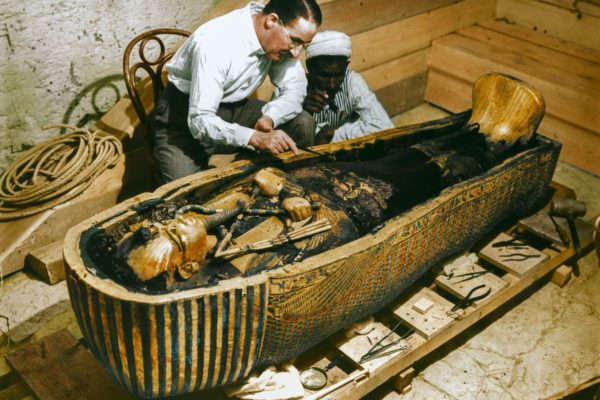 Pinterest.
It was November 4 of 1922 Howard Carter when Howard Carter discovered one of the most complete Egyptian tombs, becoming really important part of the history. We're talking about Tutankhamun, an Egyptian pharaoh. Even though Carter is known for the discovering this tomb, Husein Abdel Rasul is officially the first and one that did the discovery. He is a 10 year old kid that was in charge of carrying water for the member of the expedition. And it's said that this place is cursed, everyone that comes in dies. 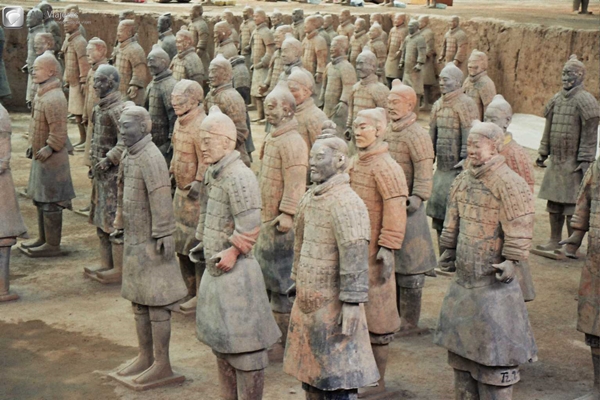 Pinterest.
The archeologist of the famous tomb, Qin Shyshuan in China, made one of the most important discoveries for the history of the humans. The sad part is that they can't study this place as they wish, leaving many secrets unsolved.

The Vampire of Venice 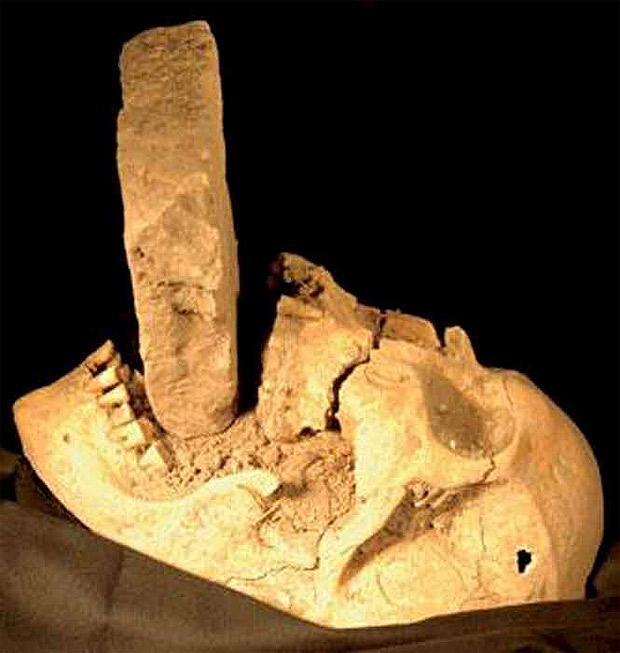 Pinterest.
In 2006 a group of Italian investigators, led by the antropologist Matteo Borrini of the University of Florence, started digging in a pit in Lazzaretto Nuovo, a Venetian island, and found the remains of 65 thousand people. Among the rests, there was the skeleton of a woman with a big brick on her mouth, making everybody really curious. According to Borrini, that skeleton belonged to the first vampire of the history. 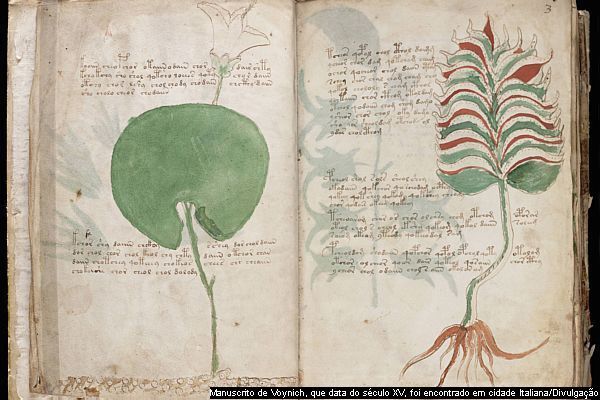 Pinterest.
Is an illustrated codex hand-written in an unknown writing system showing us a strange parallel world. We really don't know what the book is about, but it we try to understand it we can see is about nature, astrology and the zodiac. 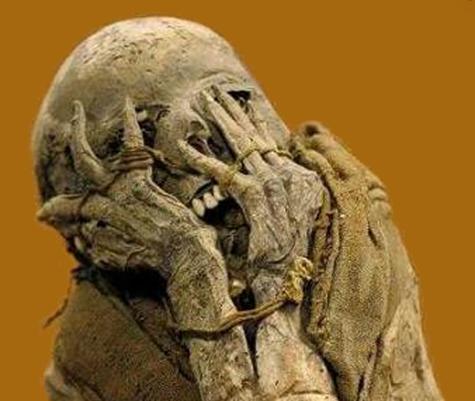 Pinterest.
Many mummies have been discovered along history, but the first time a mummy screaming was found, the archeologist went crazy. Later on they discovered the mummy was screaming because it had been a case of Catalepsy, a condition characterized by a trance with a loss of sensation and consciousness, where people are mistaken for dead and buried. These people later come back to life asking and screaming for help in their tombs. 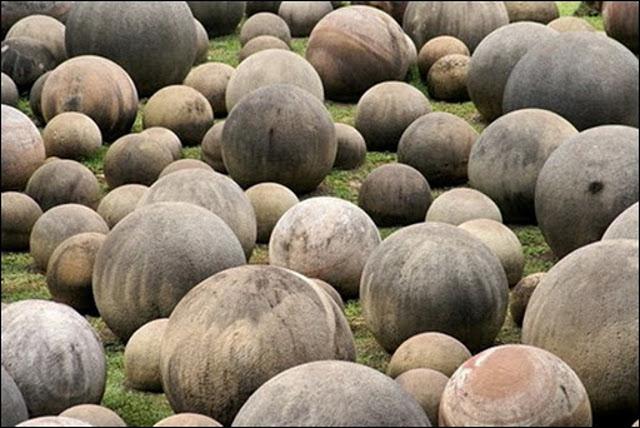 Pinterest.
The Stone spheres of Costa Rica are an assortment of over three hundred petrospheres located on the Diquís Delta and on Isla del Caño. Their precedence is unknown; they look like they were handmade because they are just perfect. 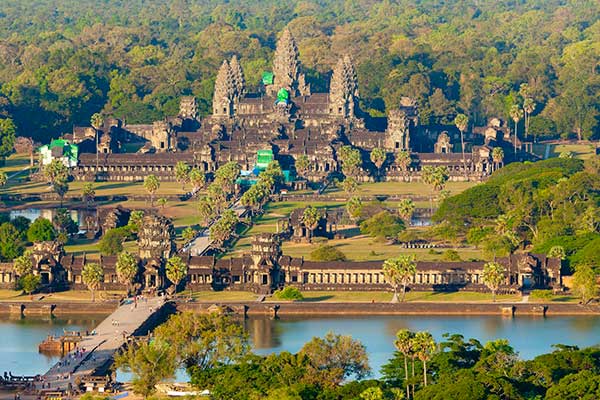 Pinterest.
Angkor Wat is a temple complex in Cambodia and the largest religious monument in the world; it is also considered as the major religious structure ever built. After being abandoned many decades ago it became the home of many Buddhists. 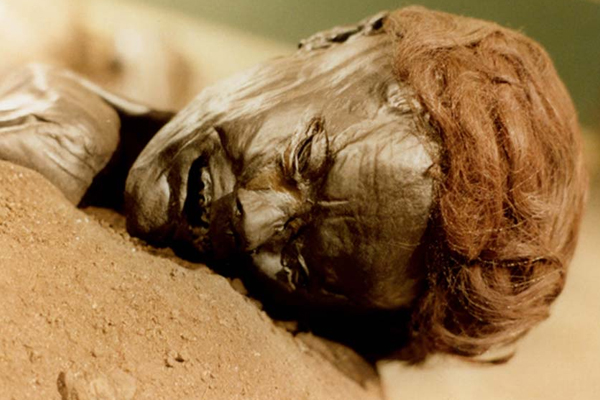 Pinterest.
The Grauballe Man is a bog body, dating from the late 3rd century BC, and it was uncovered in 1952 from a peat bog near the village of Grauballe in Jutland, Denmark. Many say that his death was caused by a sacrifice or a ritual, however, nobody is sure about it. 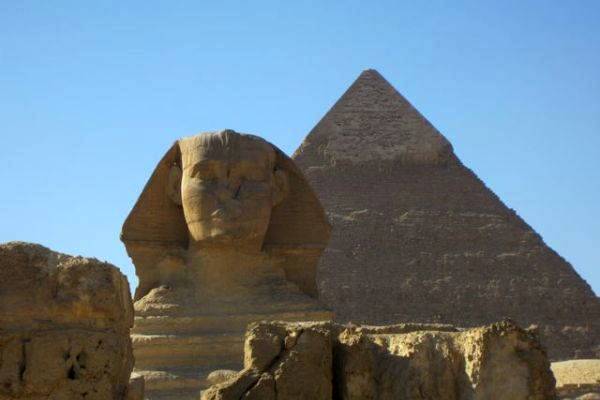 Pinterest.
The Great Pyramid of Giza is the oldest and largest of the three pyramids in the Giza pyramid complex, also the oldest of the Seven Wonders of the Ancient World, and the only one to remain largely intact. There are many theories trying to explain how it was built, but certainly nobody knows how it was made for sure. 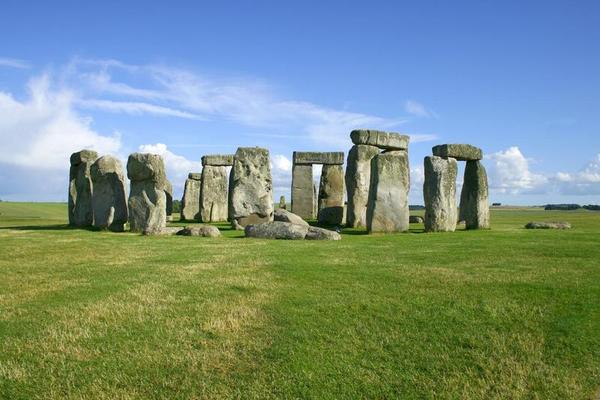 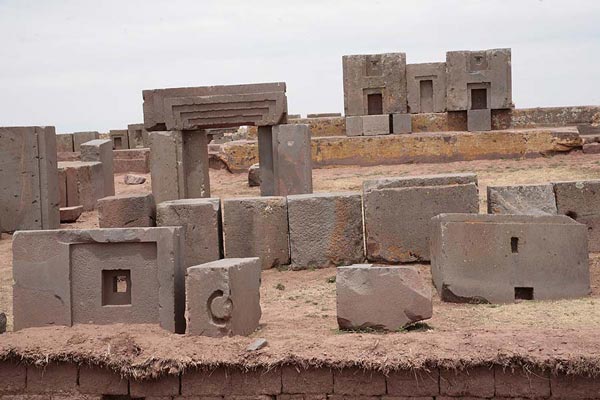 Pinterest.
Pumapunku is part of a large temple complex or monument group that is part of the Tiwanaku Site, in western Bolivia, dating supposedly in 536AD and later. It is said that giants built this city in one night and it was destructed by a big earthquake or the sun's rays. 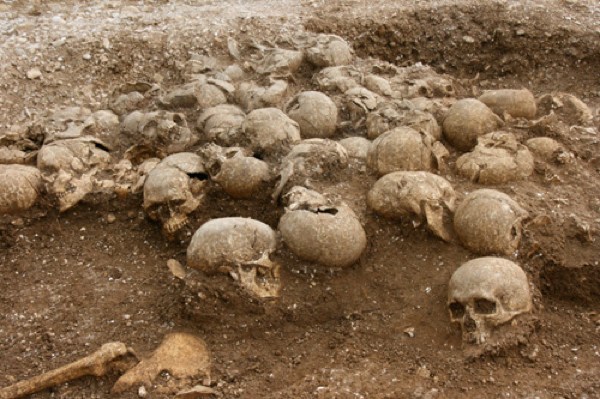 Pinterest.
Dorset, was a mass grave of 54 skeletons and 51 heads of Scandinavian men executed sometime between AD 970 and 1025. A group of British archaeologists were looking for evidence of prehistoric activity in the English county but instead they found a mass grave of male skeletons. 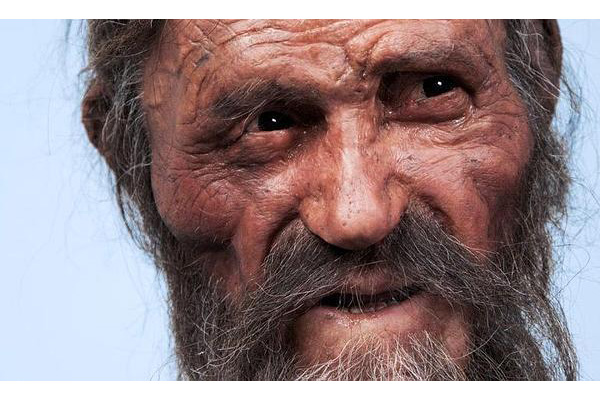 Pinterest.
Otzi is a well-preserved natural mummy of a man who lived around 3,300 BCE. It was discovered in Europe 1991 in the Otztal Alps on the Austrian-Italian border. The Iceman, who apparently was 45 years old, had many joint problems and some other diseases; this was maybe because of his condition, he was found perfectly frozen. 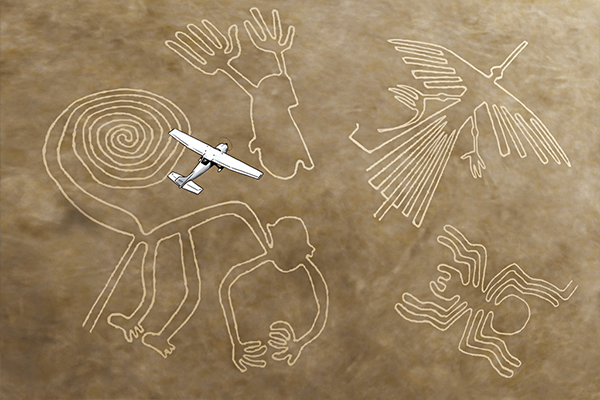 Pinterest.
Located in southern Peru, these are a group of pre-Columbian geoglyphs etched into desert sands. They where traced between 400 BC and 600 AD, covering an area of nearly 1,000 sq. kilometers, and there are about 300 different figures, including animals and plants. 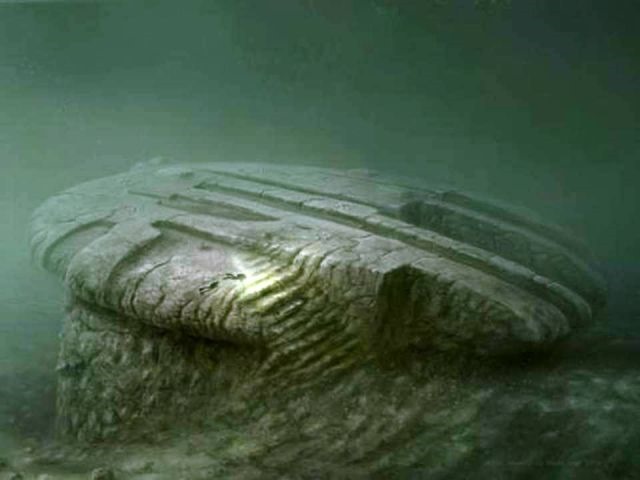 Pinterest.
The Baltic Sea anomaly is a 60-metre diameter circular rock formation on the floor of the northern Baltic Sea, at the center of the Bothnian Sea, discovered by Peter Lindberg, Dennis Åsberg and their Swedish "Ocean X" diving team in June 2011. The so-called Baltic Sea "mystery object" is still an unsolved puzzle. 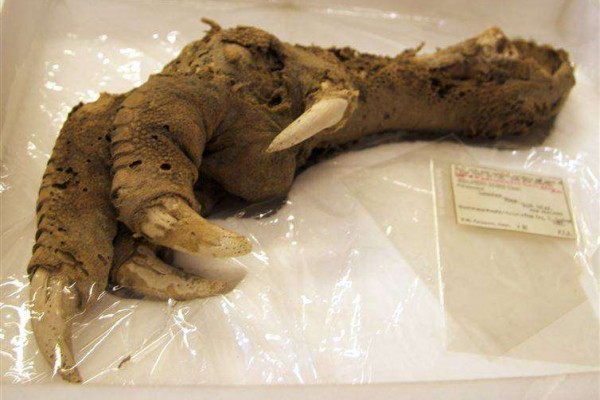 Pinterest.
In 1986, a group of archeologists found themselves inside a dark and ominous cave in Mount Owen, New Zealand, and so discovering something straight out of a Jurassic Park, but in real life. The expedition discovered a surprisingly well-intact claw, complete with scales and preserved tissue. 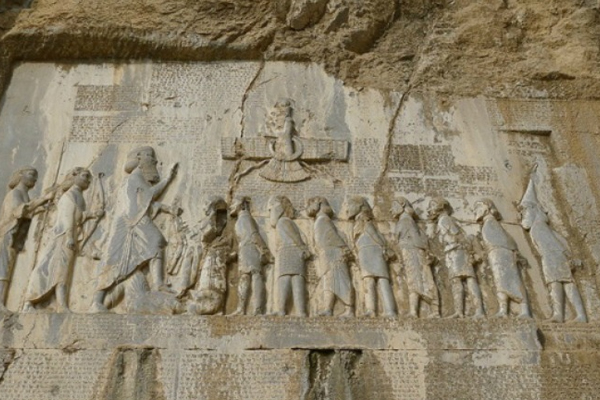 Pinterest.
The Behistun Inscription is a multilingual inscription and large rock relief on a cliff at Mount Behistun in the Kermanshah Province of Iran. The Impressive piece of art is still a mystery and the author remains unknown. 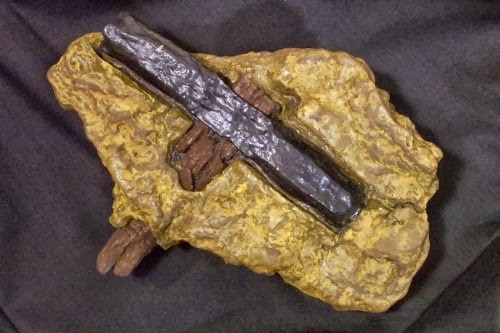 Pinterest.
The Kingoodie artifact is an object with the characteristics of a corroded iron nail found in a block of Devonian sandstone in 1844 in the Kingoodie Quarry, Scotland. The hammer was found incrusted in the center of a rock and it looks like it came from the future.

The Children of the Sewers 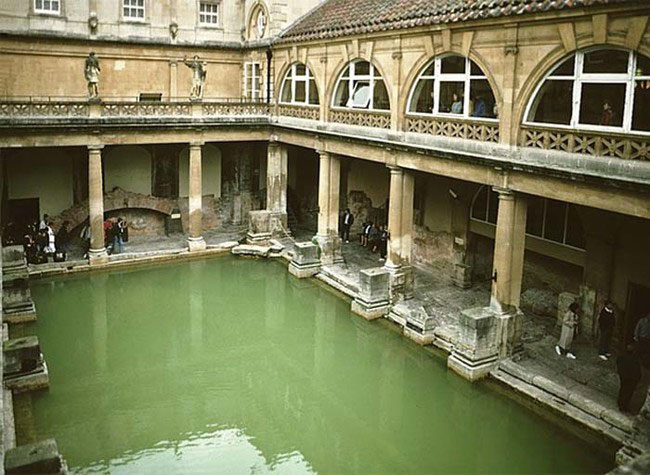 Pinterest.
Meanwhile the archeologists where digging in the Romain sewers of an old house, they found something really alarming: Bones of hundreds of babies. The scary mystery is still unsolved. 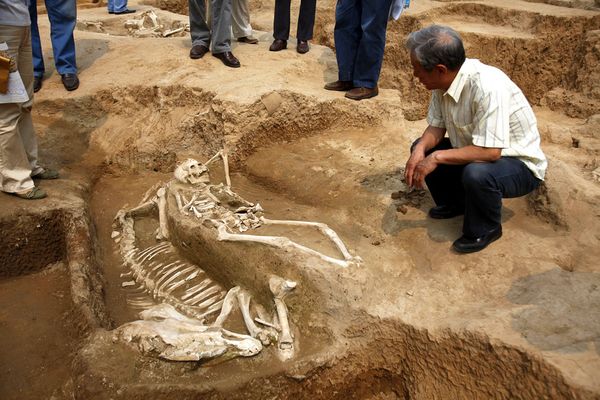 Pinterest.
Human sacrifice was a religious practice of the pre-Columbian Aztec civilization, and after some investigations made by INAH, they found evidence of a tzompantli, also known as skull rack, dating back in the 1350 and 1520, when Mexico was invaded by the Spanish.
Compartir este artículo
Mundo.com