We found a big collection of historic black and white photographs of our favorite celebrities that a group of talented artists brought them to life through color.

When we see old photos in black and white, we think of how boring our past was but we forget that life back then was experienced in the same vibrant colours that surround us today. This gallery show us the true colors of each photo thanks to a group of talented artists who did an amazing job.

Marilyn Monroe is beautiful with or without color 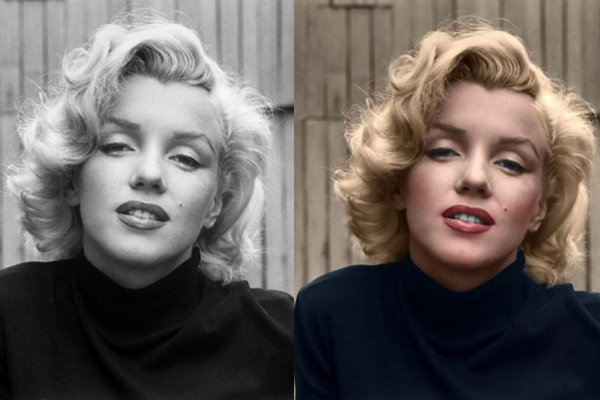 Pinterest
The artists in charge of colorizing these photos did an excellent job, and not only with the beautiful Marilyn but with the rest. And here we have Norma Jeane Baker Mortenson (Marilyn Monroe) who was one of the most famous models of history. 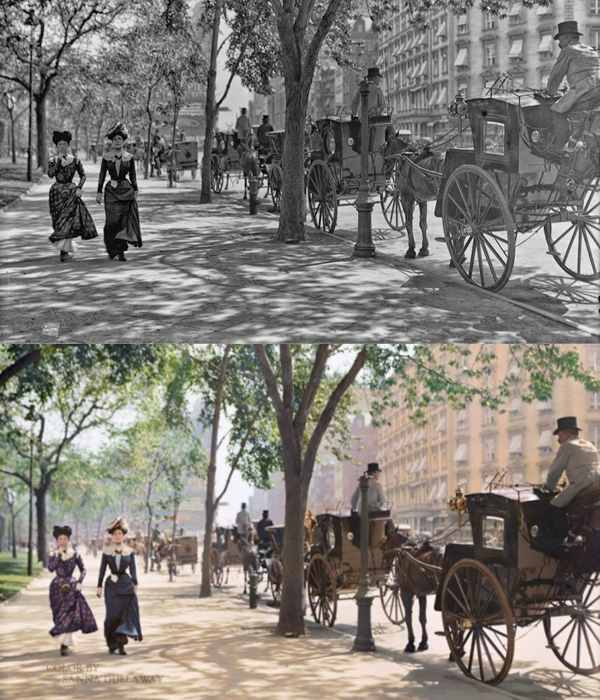 Pinterest
This photo shows us how much Madison Square Garden has changed, and this was taken in the 1900. Colors help us appreciate more all the little details, as the dresses of the ladies, the trees and even the buildings of that time.

The tenderness of Audrey Hepburn 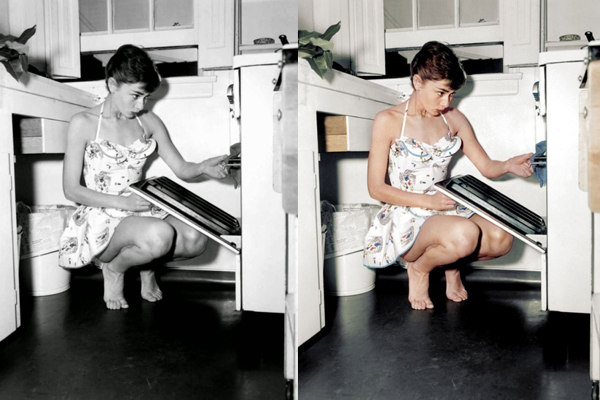 Pinterest
For those who don't know anything about her, she is Audrey Hepburn, a famous British actress of the Classical Hollywood cinema. She was considered by the American Film Institute as one of the greatest females of the American cinema.

Ku Klux Klan: A shop for people of color 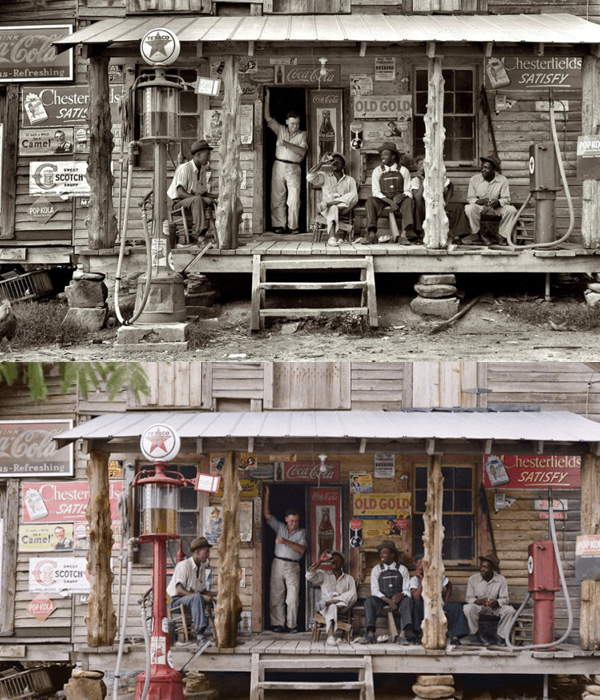 Pinterest
This photo was taken in 1939 in of the Southern United States, at that time everything was difficult for African American people, who suffered racism for several years and also the the Ku Klux Klan repression .

The Perfection of Elizabeth Taylor 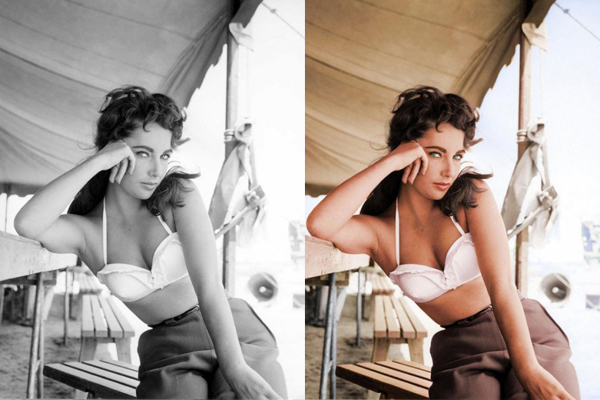 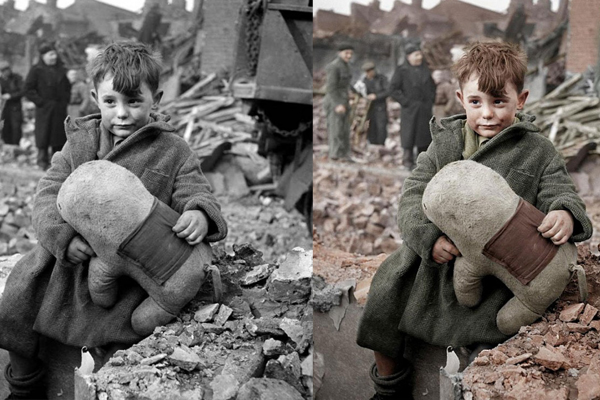 Pinterest
Definitely the World War II left big consequence for the people who lived in Europe. In this photo, which was taken in London in 1945, here we can see how a 7 year boy sitting confused right next to his toy.

The Famous Kiss in Times Square 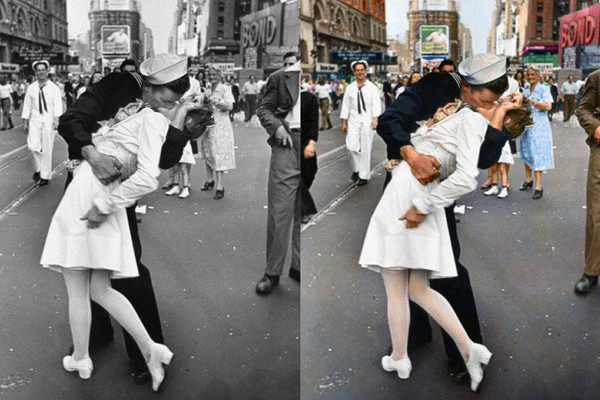 Pinterest
Another famous photo that was colorized was the kiss in Time Square in 1945. The image was taken by Alfred Eisenstaedt, who photographed this couple, an American sailor kissing a young woman in white dress, during the celebrations after the victory against Japan in World War II. 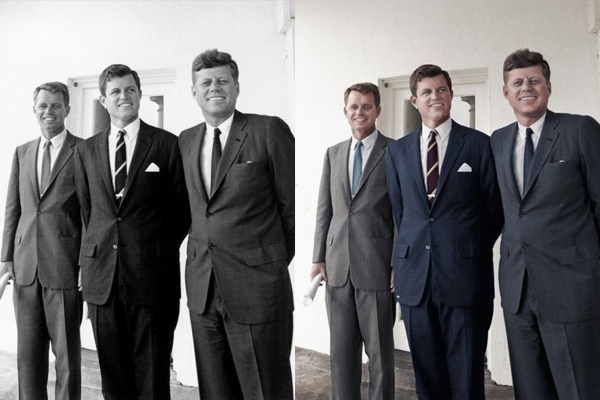 Pinterest
This photo is really recognized by everyone because it reunites three of the four Kennedy brothers. John Fitzgerald, Robert Francis and Ted posed for the cameraman during 1963, the same year that John was murdered

We all know Anne Frank 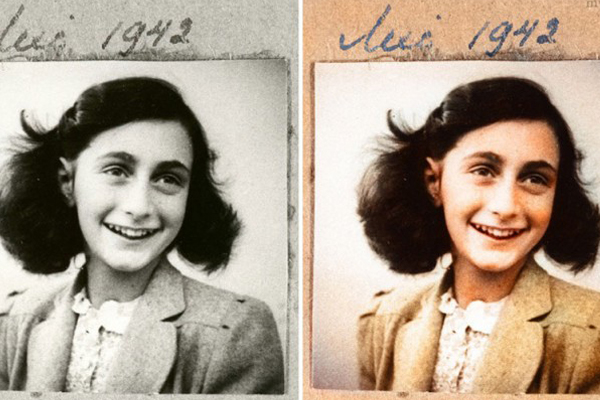 Pinterest
This photograph is very important, since it was the only one left of Anne Frank, before she was taken to the concentration camp. This photo was found inThe Diary of Anne Frank. 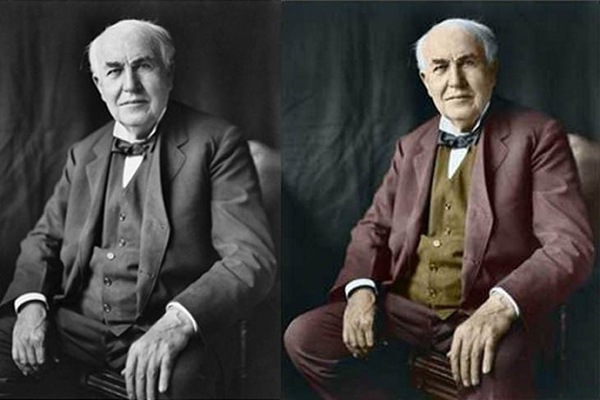 Pinterest
Thomas Alva Edison was an American inventor and businessman, who has been described as America's greatest inventor. He developed many devices that greatly influenced life around the world, including the phonograph, the motion picture camera, and the long-lasting, practical electric light bulb. 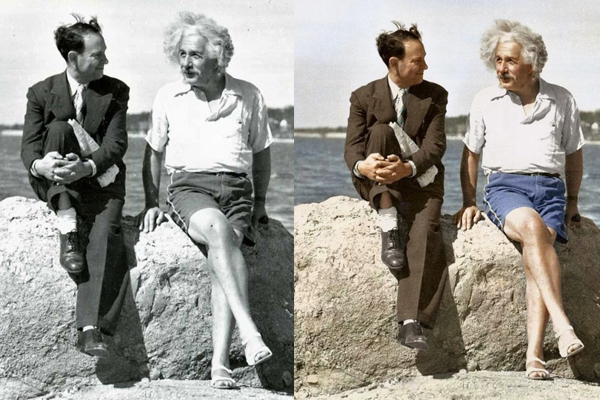 Pinterest
He developed the theory of relativity, one of the two pillars of modern physics. Einstein's work is also known for its influence on the philosophy of science.  This photograph was taken while he was having a conversation with a colleague.

The historic photo of Hindenburg 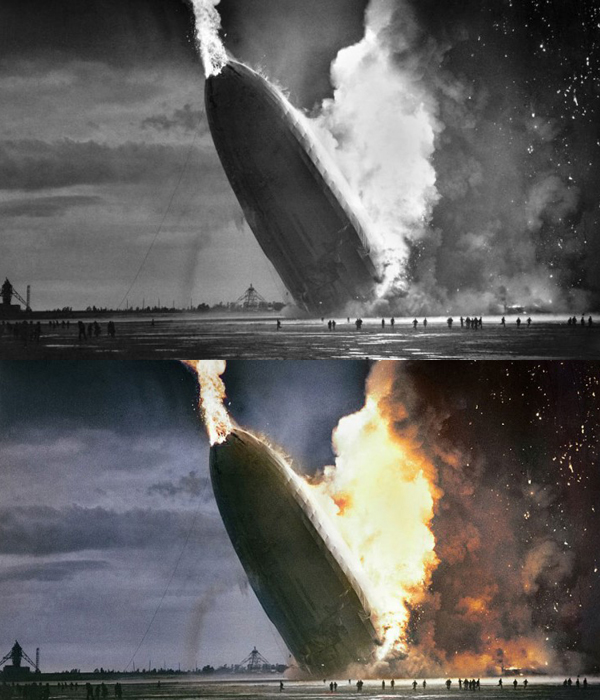 Pinterest
The Hindenburg flew its first North American transatlantic flight in May 1937, but during its landing on May 6, 1937, the airship burst into flames and crashed to the ground in Lakehurst, New Jersey.

The one and only Charles Chaplin 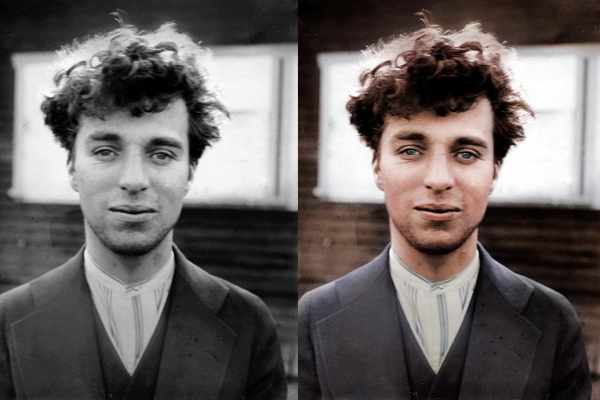 Pinterest
Sir Charles Spencer "Charlie" Chaplin, KBE was an English comic actor, filmmaker, and composer who rose to fame during the era of silent film. 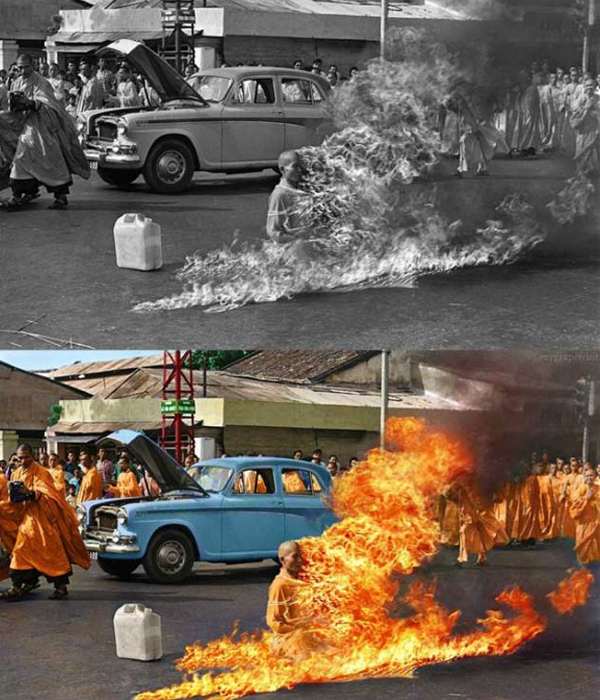 Pinterest
The first and most famous moment of self-immolation as agitprop was that of Thich Quang Duc in 1963. This photo was taken in the right moment 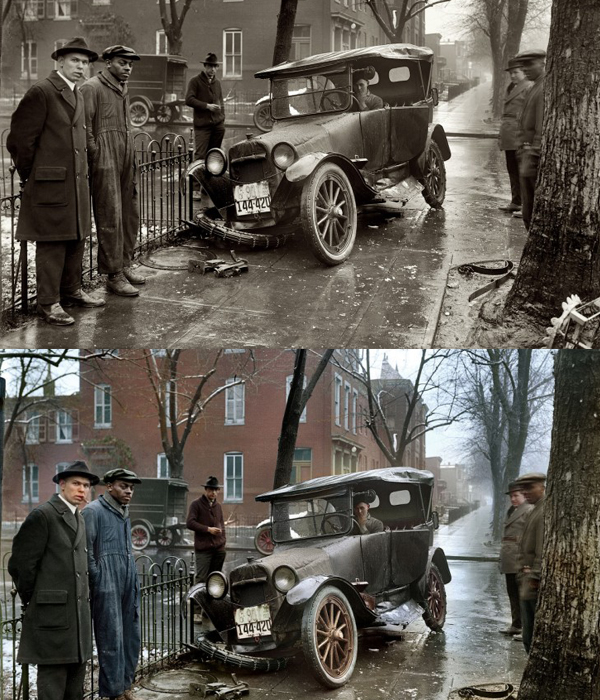 Pinterest
This photograph show us that not only traffic can cause accidents, but also during the first years people started using cars many people suffered several accidents.

Abraham Lincoln in one of his last photographs 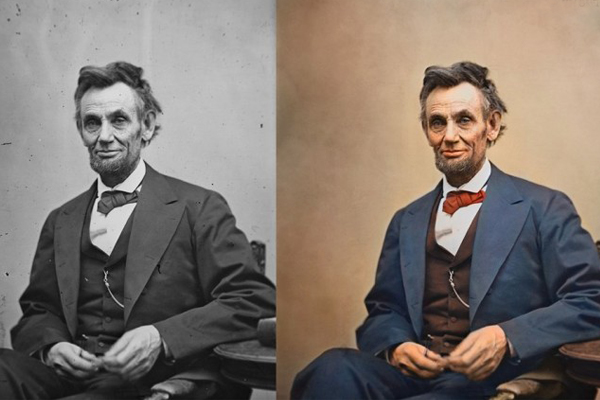 Pinterest
Abraham Lincoln, a self-taught lawyer, legislator and vocal opponent of slavery, was 16th president of the United States from March 1861 until his assassination in April 1865. 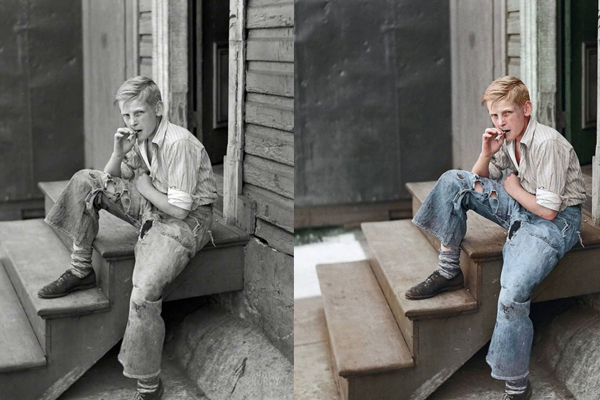 Pinterest
In this photograph, taken in 1938, shows us several socio-economic contexts that the American families were going through at the time. What surprises us the most about this image is seeing a child smoking a cigarette. 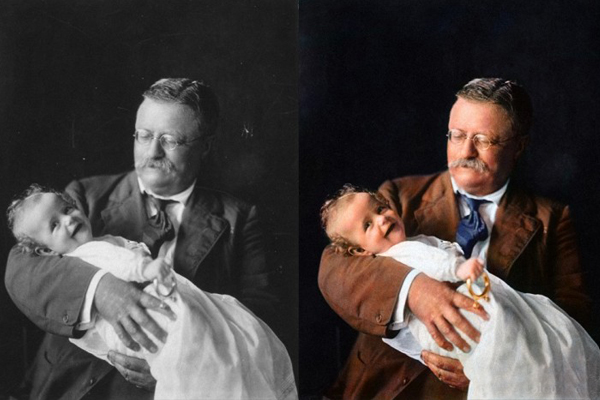 Pinterest
Theodore Roosevelt Jr. was an American statesman, author, explorer, soldier, naturalist, and reformer who served as the 26th President of the United States from 1901 to 1909. 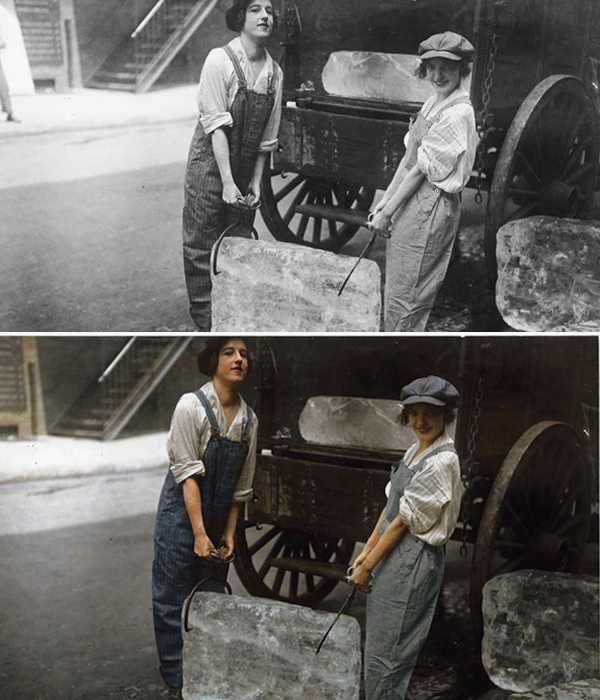 Pinterest
This photograph shows us the great work done by the people in 1918, an era in which everyone had to make several sacrifices, for example women carrying ice around. 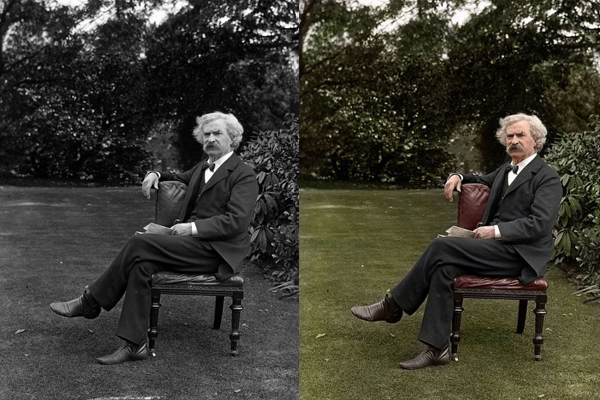