Creative ideas to decorate your bedroom

Your bedroom is the part of the house where you spend most of your time. Whether you are still living in your parents’ house or not, it is the only place where you can do whatever you want. It’s your special room where you sleep, watch TV, have long conversations on the phone, or spend hours studying for exams. This room needs to be as comfortable and relaxing as possible.

We’ll share with you the best ideas to decorate your bedroom, all you need is creativity and a little bit of imagination to turn your bedroom into the coolest room of the house! 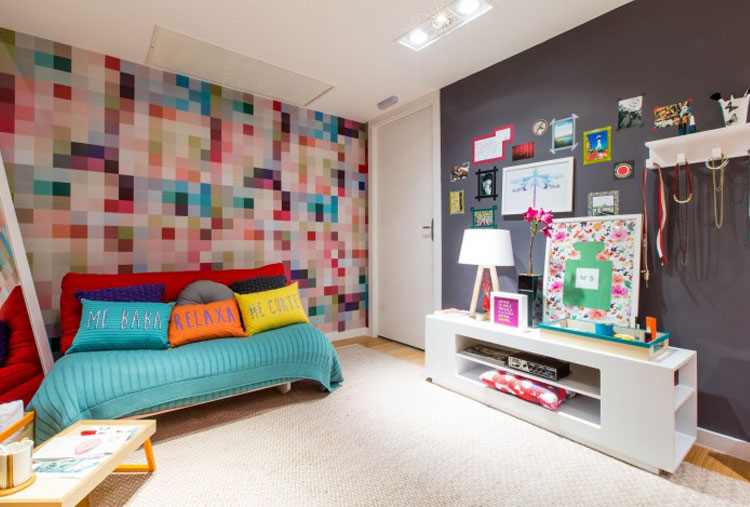 If you want to give a little life and color to your room, this idea is perfect for you! Painting all the walls in your room with the same color is not necessary; you can just paint a pixelated mural on one of the walls. It will definitely look awesome!

How to make a room look bigger 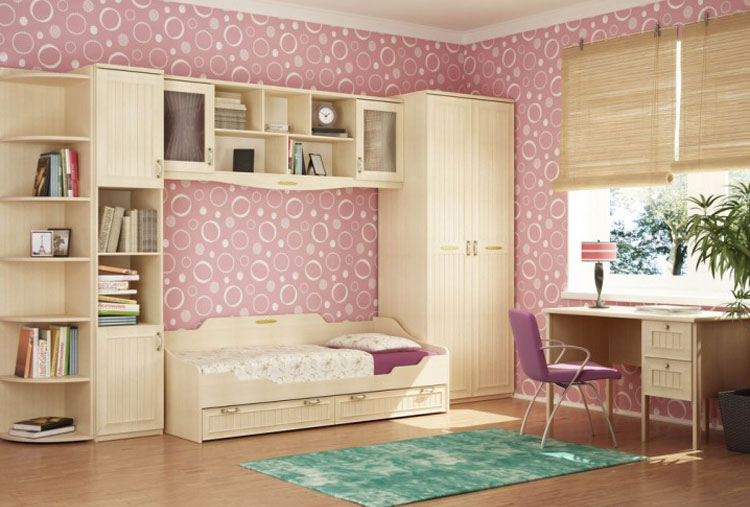 If you have a small bedroom, this might be very useful to you. Buying space-saving furniture, like the one in the picture above, will help you have a little more space in the room to make it look bigger. 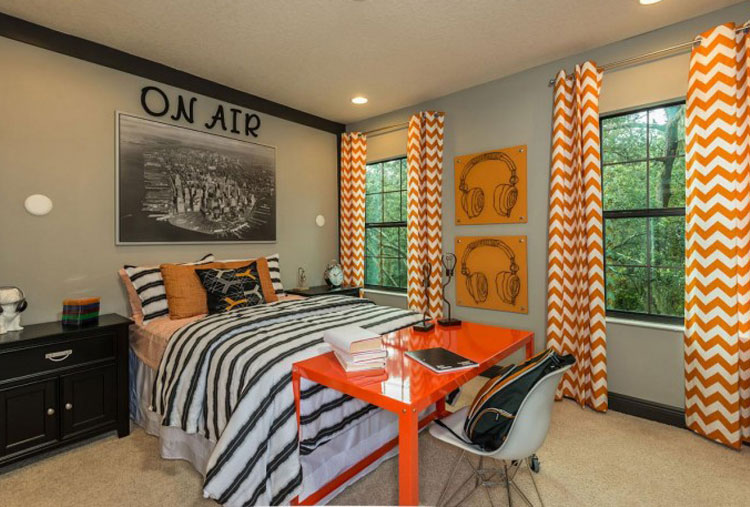 If you are a fan of music, you'll love this bedroom! You can see how in this bedroom the orange is the pop of color that the room needs to stand out. The black, gray and white go well together with that flashy orange. 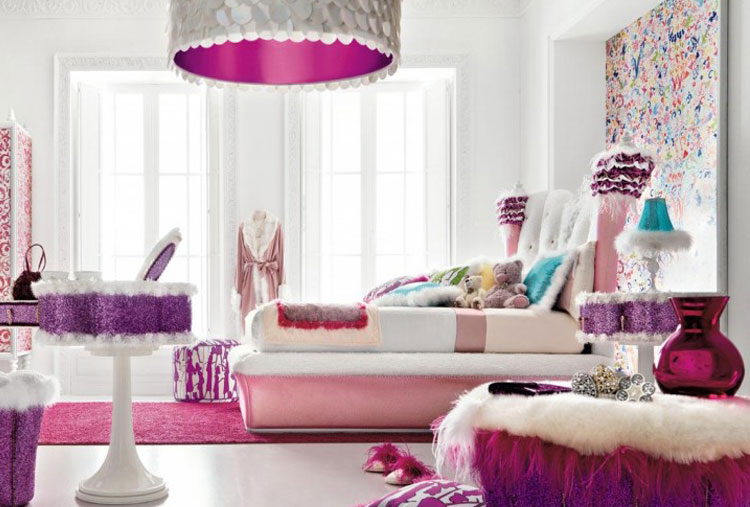 You don’t need to be part of the royal family or a little girl to have pink, princess room. In this picture, you can see how the furry furniture and the bright colors make the bedroom look extremely cozy. 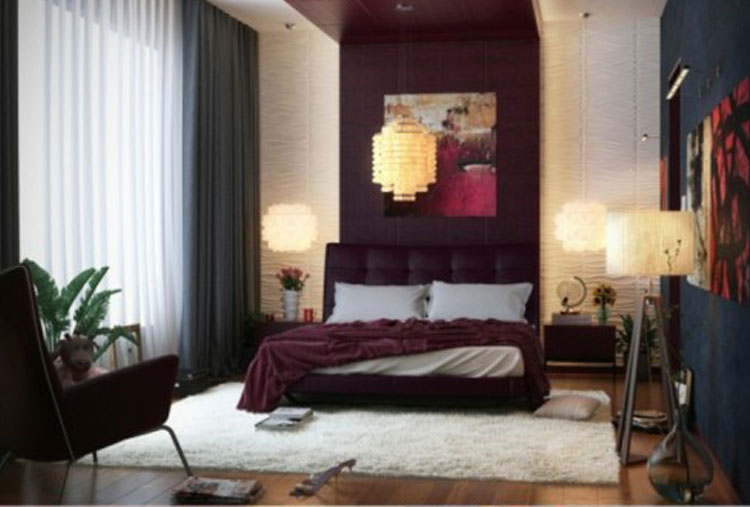 If you have a classier taste then this room is perfect for you. The burgundy, white and dark gray go really well together and those hanging lamps give the room that extra touch. 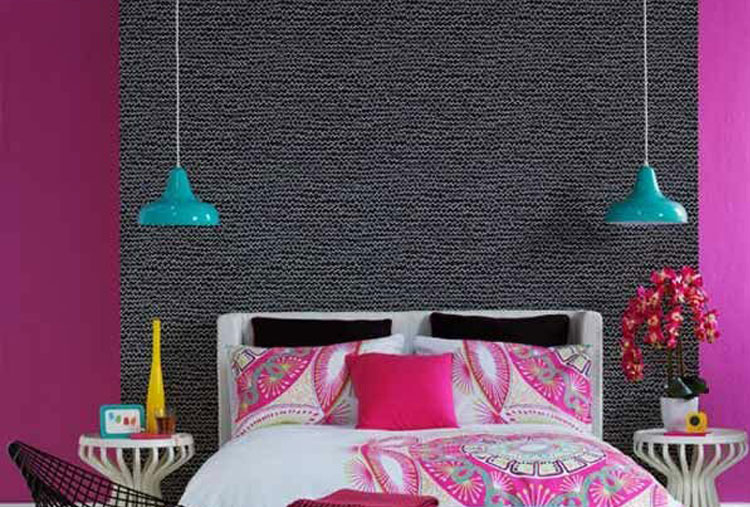 This is a very original idea, which not many people think of because they just focus on the colors, furniture, and accessories. Many designers believe that adding texture to a room makes it look cozier. 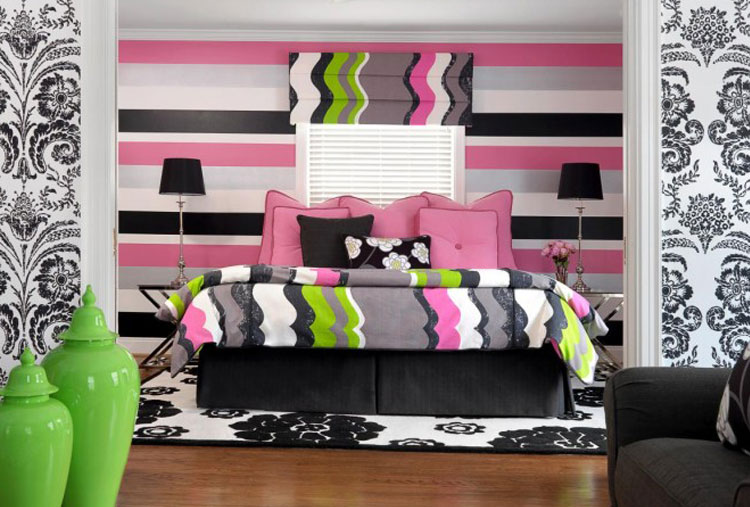 Most people are afraid of mixing patterns, but it is actually a very creative way to decorate your bedroom. In this picture, you can see how the designer mixed three different patterns and they still look great together. 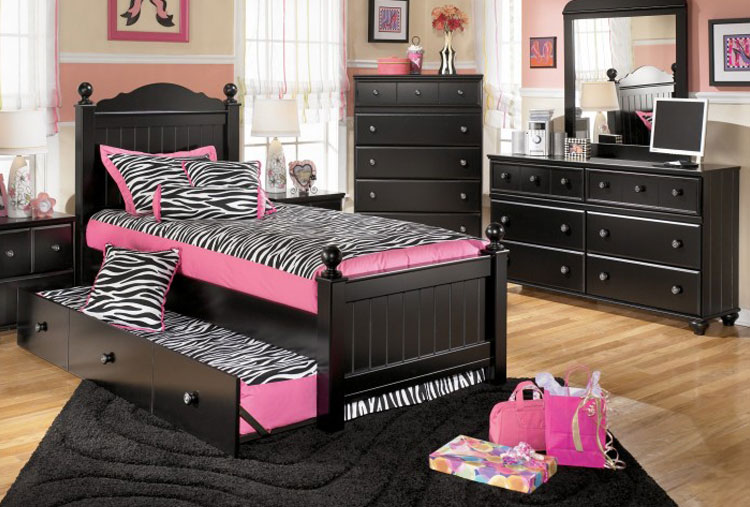 If zebras are your favorite animal, we’ve got the best idea for you! In this room, the pink goes really well together with the black furniture because it creates the perfect balance between a dark and a softer color. 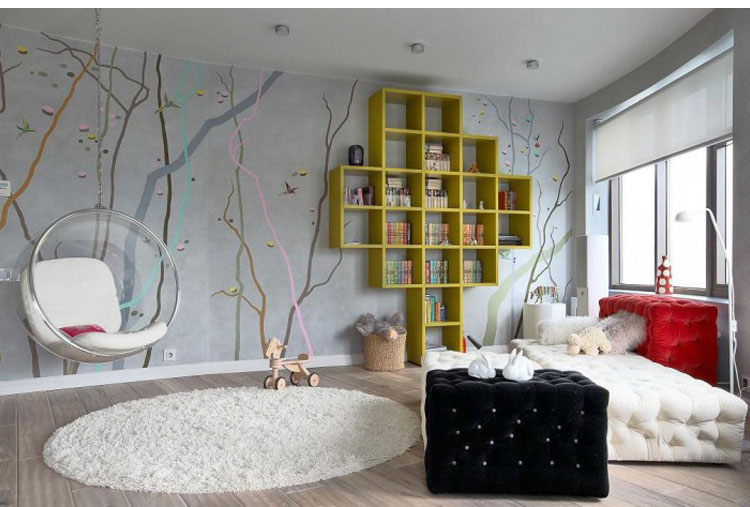 In this room, you can see how the yellow shelf is the perfect creative piece of furniture. The soft colors go really well together with the red and black furniture as well. 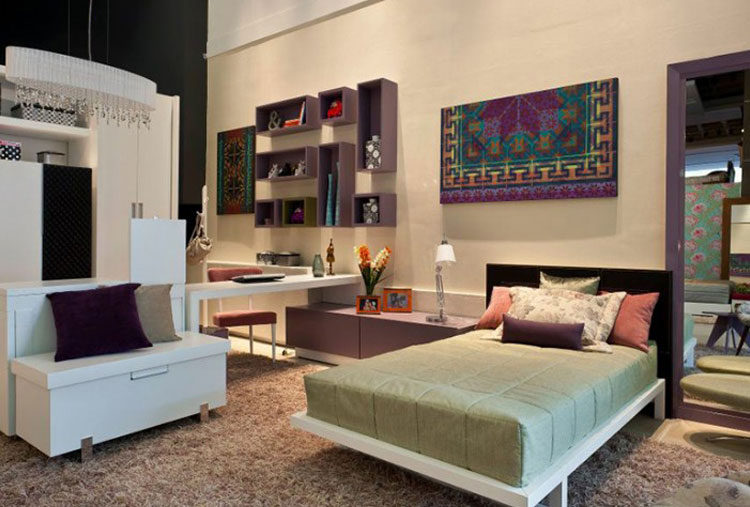 If you have lots of things in your bedroom but don’t know how to organize them, getting a hanging bookshelf is the best option for you! In this room, the designer definitely knew how to save some space.

Your own studying space 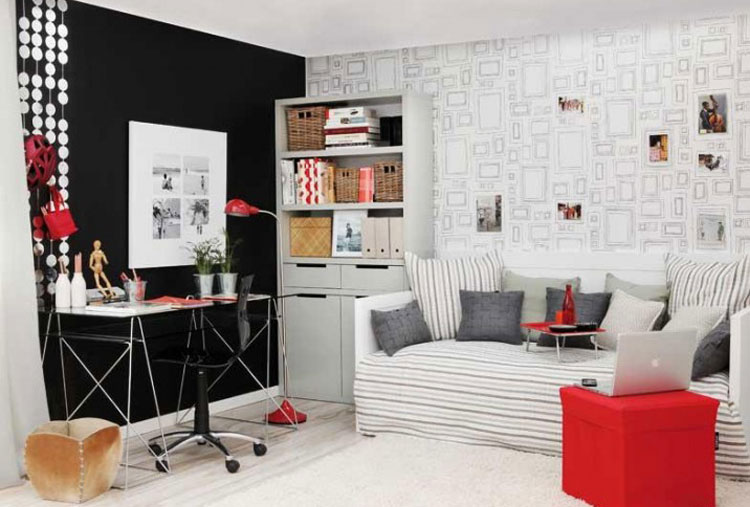 If you don’t have an extra room to turn it into a study area, then this idea is perfect for you. All you have to do is buy a desk that doesn’t take too much space in the room, and as you can see in the picture above, a neutral background can help you concentrate better. 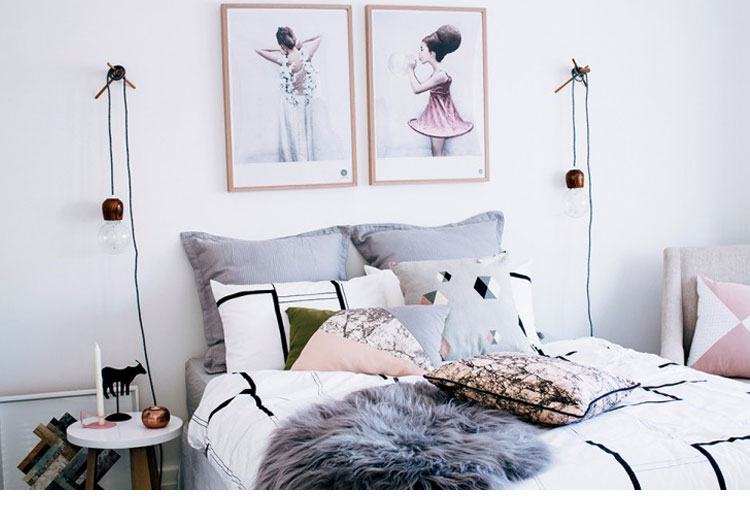 This bedroom proves that using the right accessories such as pillows, lamps and paintings, can make a huge difference. Mixing colors like white, gray and pink can also give your bedroom that coziness it needs. We absolutely adore this bedroom! 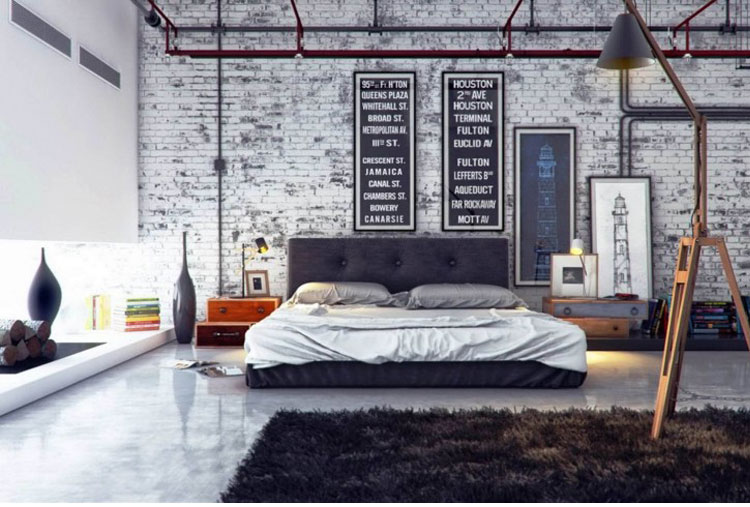 If you live in an apartment with high ceilings, then space is not an issue. You can decorate your bedroom with big paintings and tall lamps, like the room in this picture. 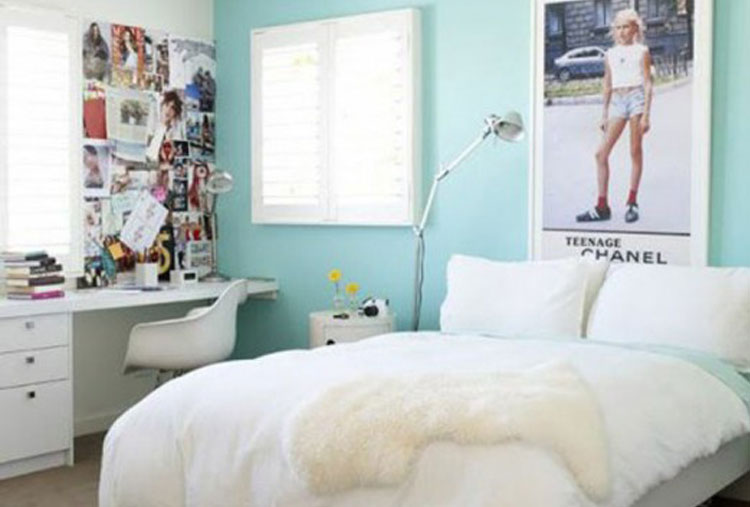 Light colors make your room look brighter, and it makes it look bigger. Remember that feeling comfortable and relaxed in your bedroom is extremely important. Putting your favorite pictures on the wall also looks awesome! 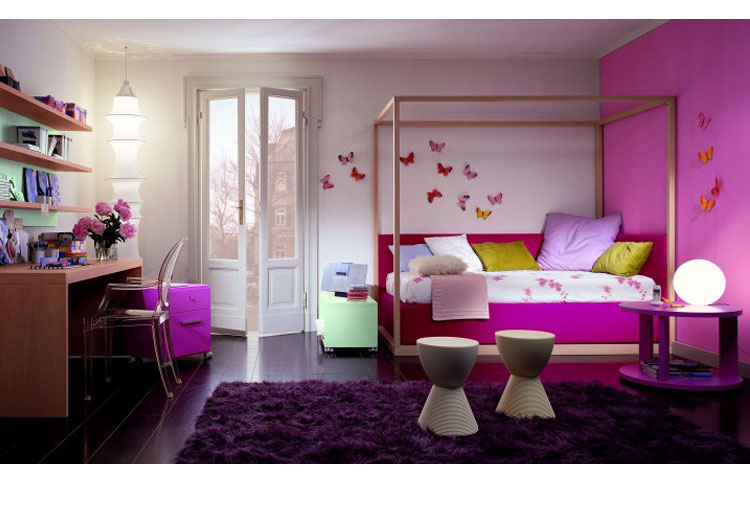 Don’t be afraid of choosing bright colors for your bedroom; a bright color and a soft one like white create a perfect balance in the room. 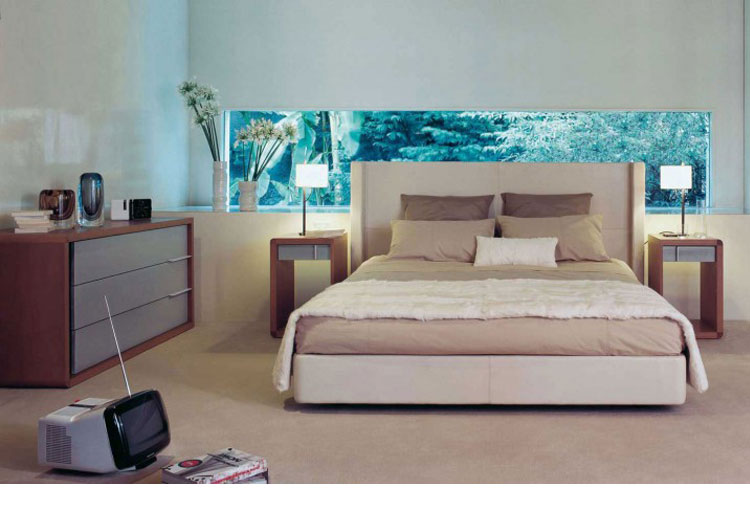 Blue is a color that conveys confidence and security so choosing this color for your bedroom is a great idea! 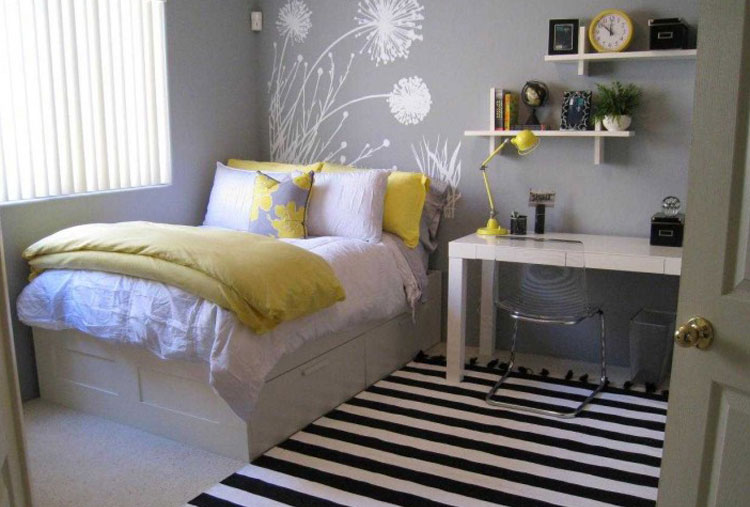 Flowers are perfect for decorating any space, whether artificial, natural or simply drawn on a wall, they are perfect for all those lovers of nature decor. They give your room a unique and sophisticated style. 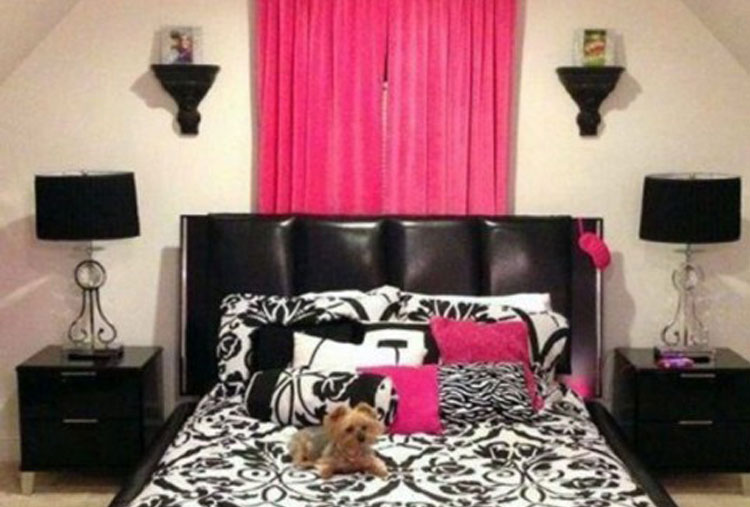 Here’s another example of how great pink and black go together, it can give the room a feminine and elegant style. 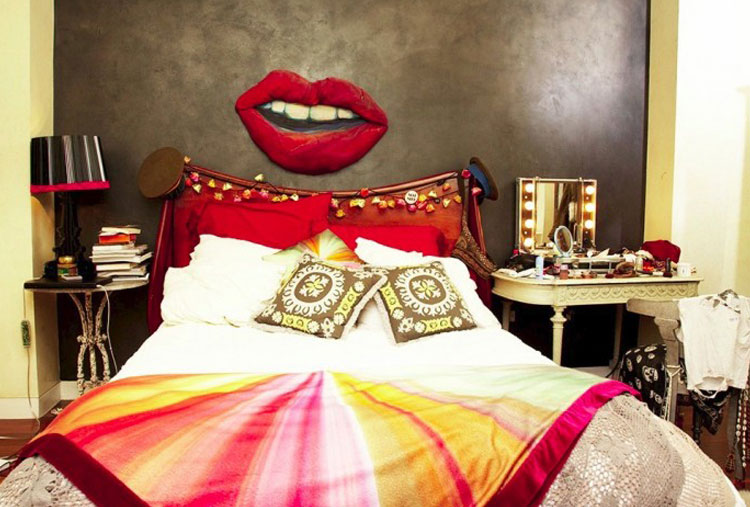 If you are a fan of vibrant colors, you’ll absolutely adore this bedroom! The lips painted on the wall, and the different textures, make this room unique with an edgy style. 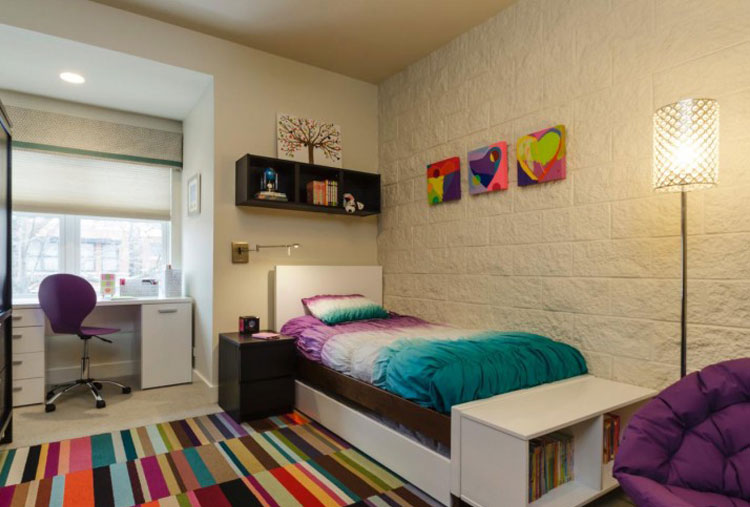 Who said carpets were boring? In this room full of neutral colors, the colorful carpet makes it look unique and vibrant. We love it!