Can you imagine what guys look like posing like girls? Check out these photos! - Mundo EN
Omg

Social networks have had a huge impact on society, they have removed all interaction barriers, and now a simple photo can go viral in just minutes. Instagram has probably become the most popular app for uploading pictures. Whether it is a funny-looking animal, a beautiful place with breathtaking views or someone doing something really bizarre, Instagram users upload all sorts of pictures.

In this post, we’ll share with you hilarious photos of guys posing like girls, the way they are standing or the facial expressions are just too accurate! 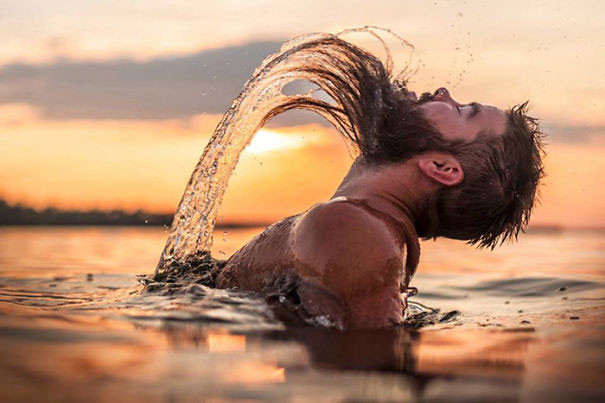 We've all seen the typical photograph in which girls are coming out of a pool or the sea and they flip their hair to get a great shot. In this picture, the guy’s hair wasn’t long enough to do the hair flip, so he decided to use his beard instead. We have to admit the photo looks really cool, especially with that sunset in the background.

Girl in the garden 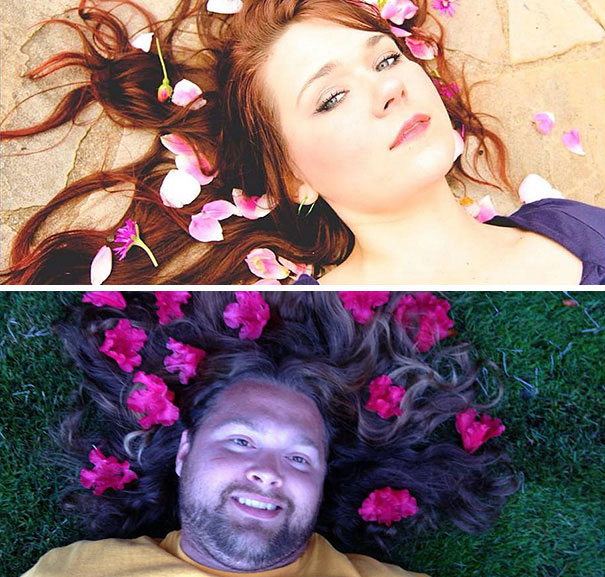 This girl shared on social networks this beautiful photograph taken during a photoshoot, but her cousin didn’t wait for long to imitate her. In the picture below, he tried to pose in the same way, just lying in the garden with a broad smile and a few flowers, this guy did a pretty good job; creativity has no limits. 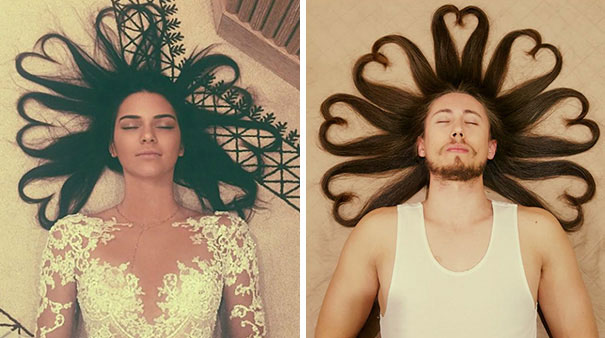 Kendall Jenner uploaded this photograph on Instagram in 2015 in which she is lying down with her hair spread out in a crown of hearts, and it reached more than 3.6 million likes. Many young girls started taking similar pictures, but this one's really good!

Shopping with the dog 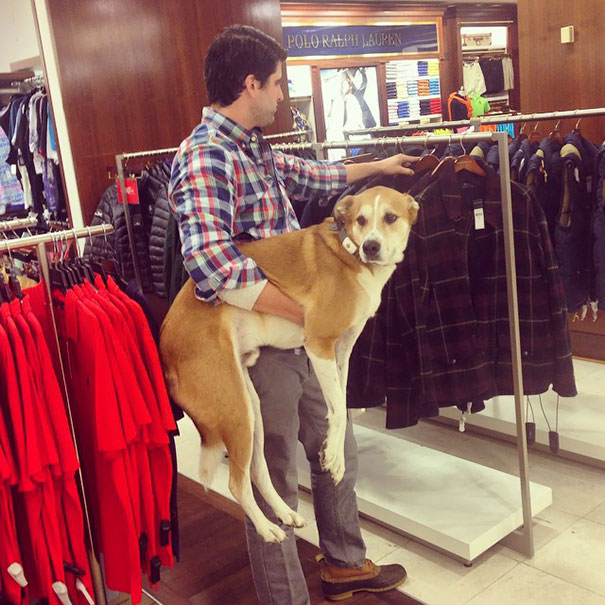 It is really common to see girls shopping at the mall with their tiny dogs. If you watched “Legally Blonde” you are familiar with “Elle Woods” the girl who took her dog everywhere she went. This guy and his huge dog tried to imitate these girls, and we love it! 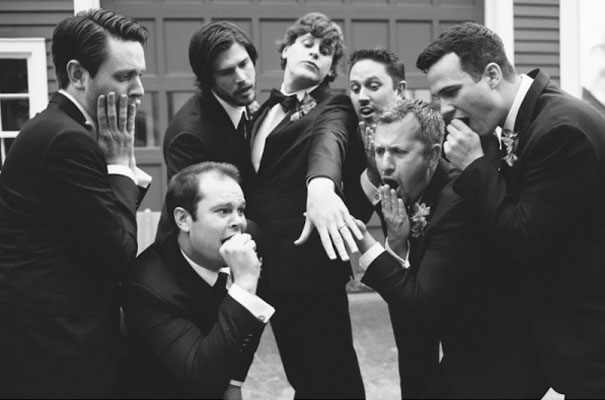 Wedding photo shoots are really creative, and the bride and groom often take pictures with their best friends to remember that special day. In this case, the guys decided to act like they were in awe of the groom’s ring. They did a really good job! 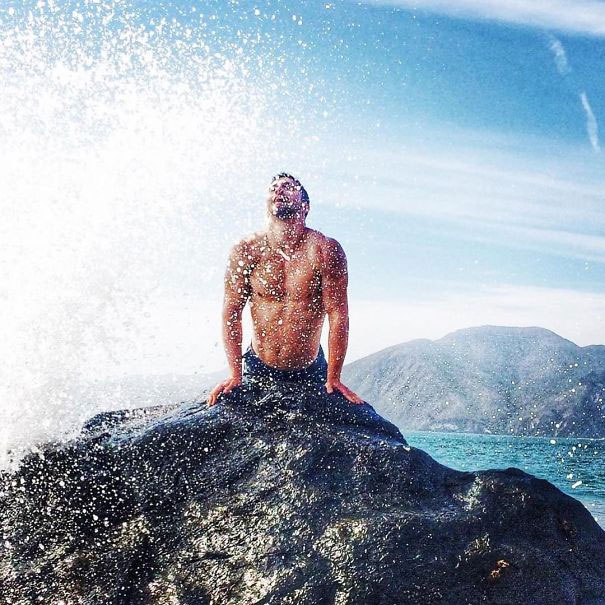 If you like going to the beach, then you probably remember watching girls pose like they are Ariel, from “The Little Mermaid”. This guy’s picture was probably taken by a professional photographer because it looks really cool!

Perfect day at the beach 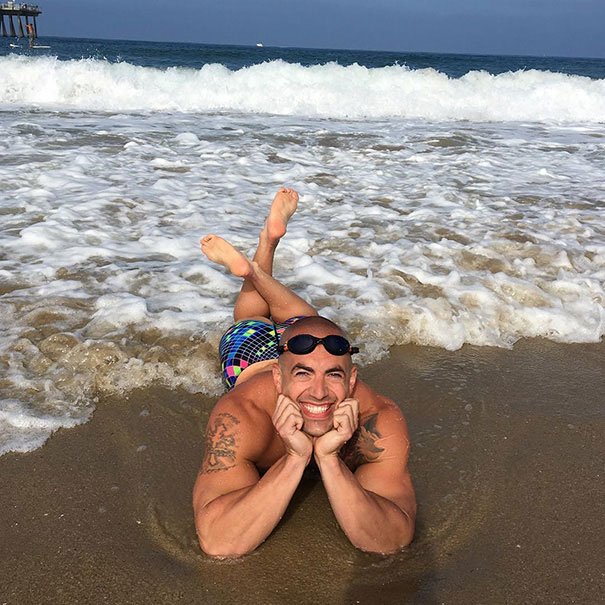 One of the most popular travel destinations is going to the beach on the weekends, just to relax and have a good time. Most girls like taking as many pictures as they can while they are at the beach. In this case, the guy looks pretty excited to pose like a girl. 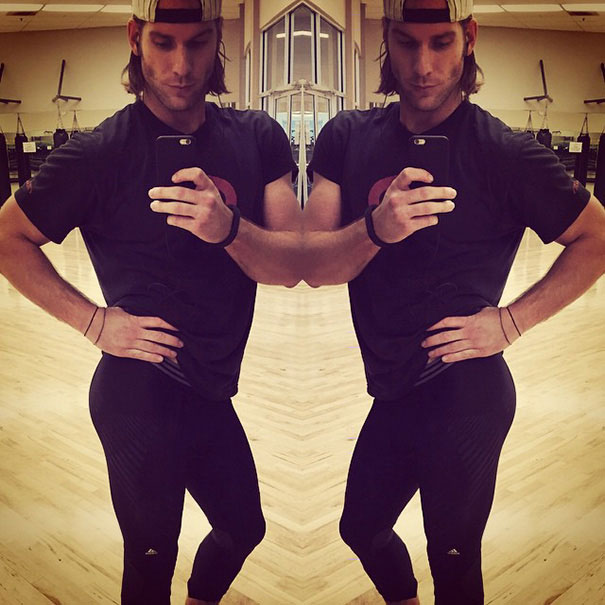 Even though some girls say they don’t take mirror selfies, most of them do like posing in front of the mirror, especially after a good workout. The typical hand on the waist and the "duck face”, helped this guy mimic all those girls who take pictures of themselves at the gym. 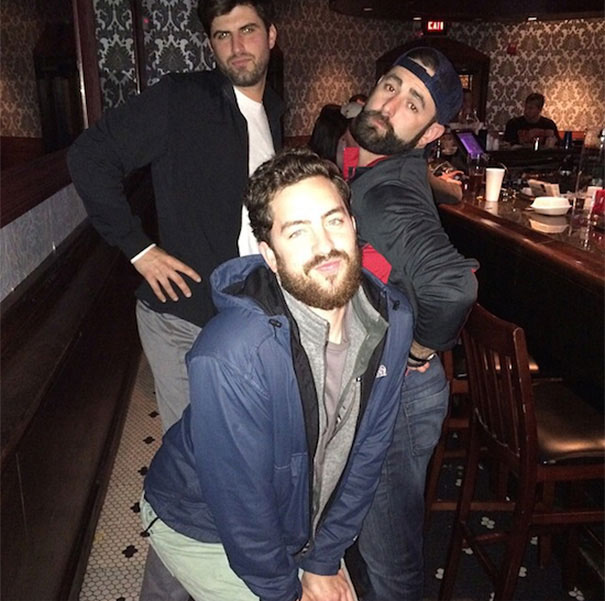 We all have our “squad”, a group of our closest friends and we can be as silly as we want with them. When girls meet up with their friends, they take hundreds of pictures until they get the perfect shot. In this photo, these guys look really funny acting like teenagers. 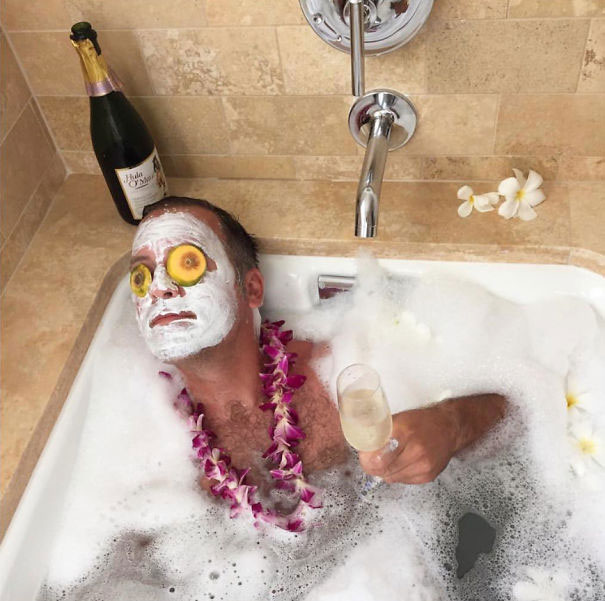 We have all been through stressful days at work or school and as soon as we get home, taking some time to relax is the best thing we can do. Girls tend to share me-time moments on social networks, and a glass of wine or champagne is a must in every picture. 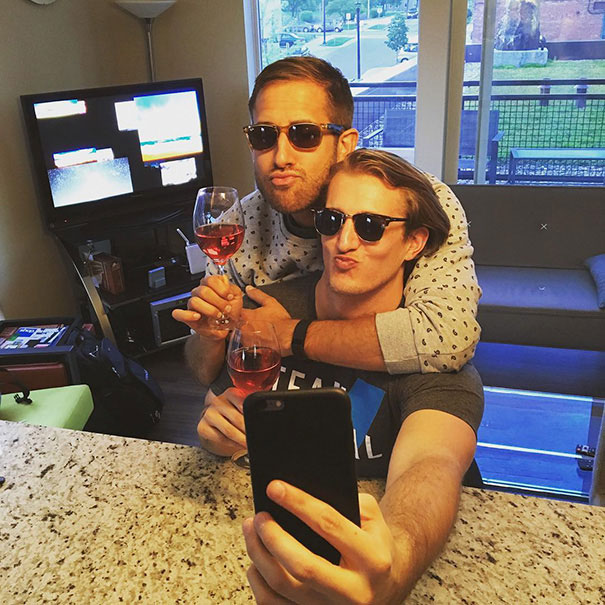 If girls want to spend some time together on a Friday night, they meet up at someone’s apartment to drink some wine, order something to eat and of course… take pictures! It looks like these guys decided to do just that, and take a selfie. 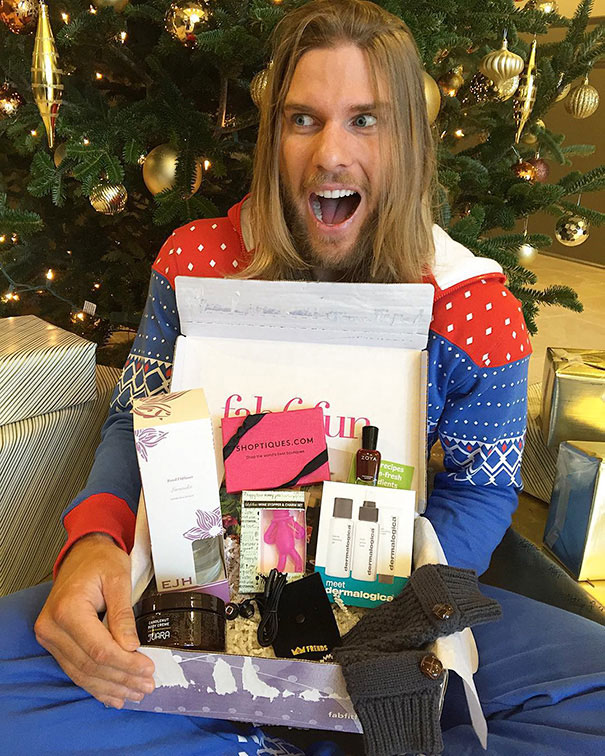 We all know how exciting Christmas’ mornings can be. It doesn’t matter how old you are, you always get excited whenever you get exactly what you wanted. This guy did a pretty good job, pretending to be a girl who just got the best beauty kit ever! 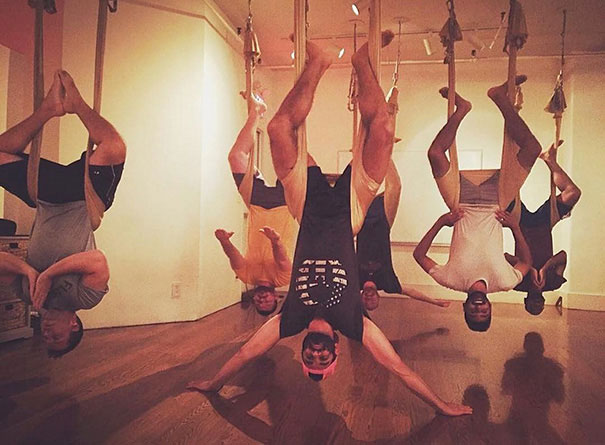 Going to the same gym with your friends is always a great idea; you can exercise and spend time with them. These guys took the “acting like girls” to a whole new level, taking an aerial yoga class. We have to admit, they did a pretty good job!

Day at the spa 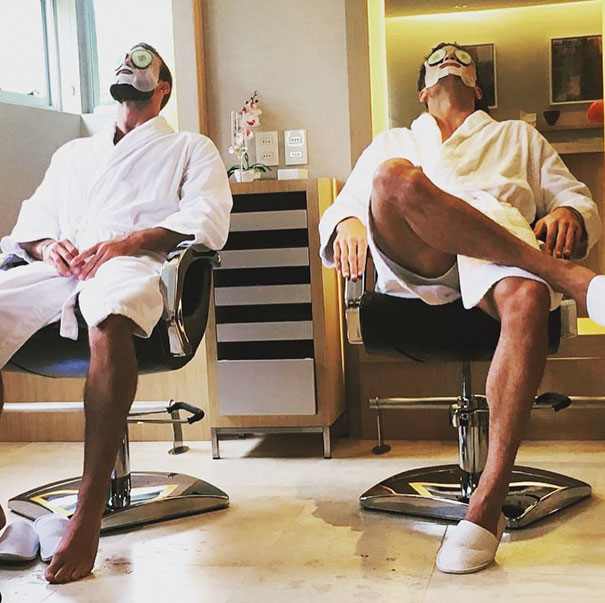 When you think of a day at the spa, massages, masks and a comfortable robe is all you need to relax. These guys perfectly mimicked a spa day for women, although nowadays it is more common for guys to pamper themselves going to the gym. 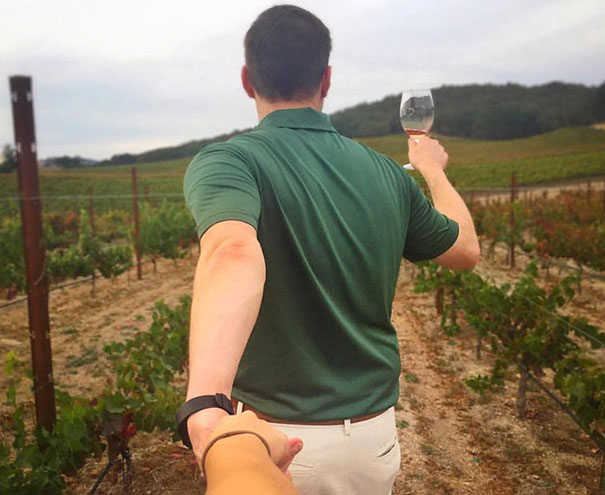 One of the most popular things among couples is taking pictures of their significant others while they are visiting a new place. In this picture, the couple decided to do just that, but instead of the guy taking the picture, it was actually her who took it. Isn’t it funny? We love it! 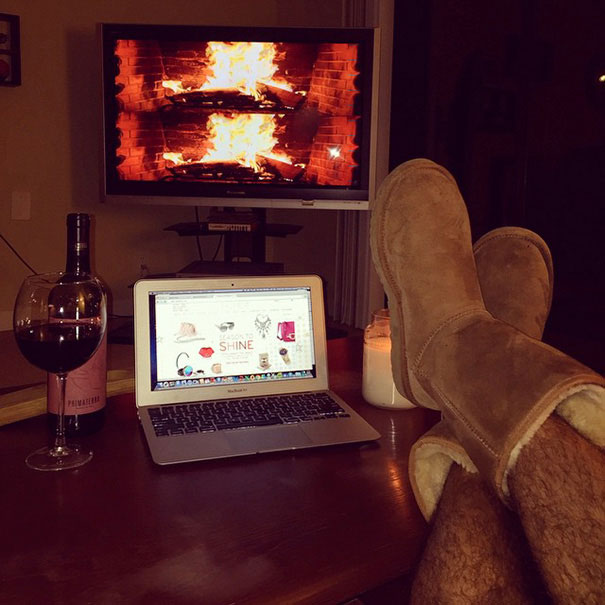 Most people think that the “typical girl” uses Ugg boots and likes shopping online while sipping a glass of wine. Well, this is definitely a stereotype, but this guy looks really funny wearing the Ugg boots with those really hairy legs. 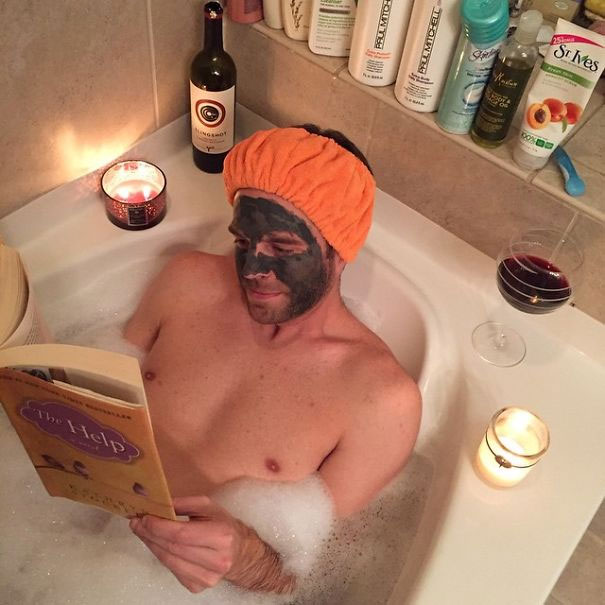 Every fashion blogger with millions of followers on Instagram has probably uploaded a photo of her taking a relaxing bath. This guy decided to take one of those pictures and he even had a face mask on. It looks like he is actually enjoying it! 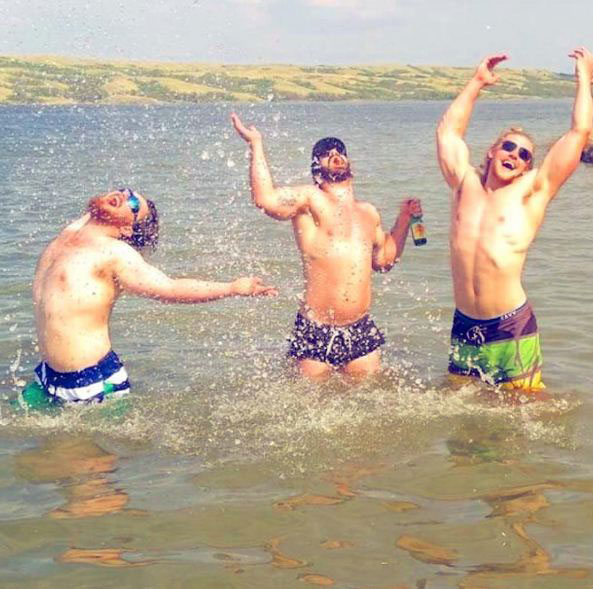 This is probably one of the funniest pictures on this post; these guys could not hide their excitement while they were at the beach. It’s funny how normal this picture would actually look like if it were girls instead of guys.

Pilates is a type of exercise which is very similar to yoga and it has become very popular because they help keep your body toned, that’s why girls love them. These guys decided to take a picture pretending to be “working out with the girls”. 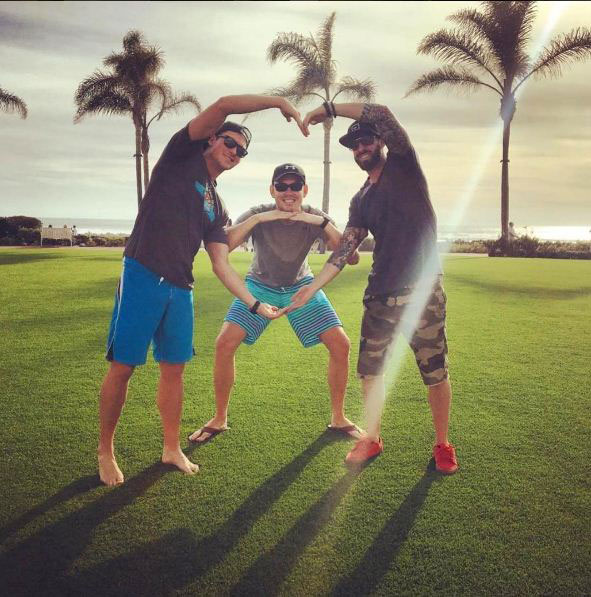 This is probably one of the cheesiest pictures! These guys are best friends and they decided to show the world that their friendship will last forever. We hope you enjoyed these pictures of guys posing like girls but remember these are all stereotypes!