Nachos are one of the most popular snacks and they are perfect for any occasion, this is because they can be mixed with almost any ingredient and they always taste delicious. You can eat them as a complete meal or as an appetizer. Nachos were created in northern Mexico by Ignacio Anaya, a Mexican restaurateur.

They are usually served with guacamole, cheese or sauce but there are many other ways to eat nachos; either with chicken, beef, peppers, beans or mixing all the ingredients together. Check out some of the best recipes to share with friends or family! 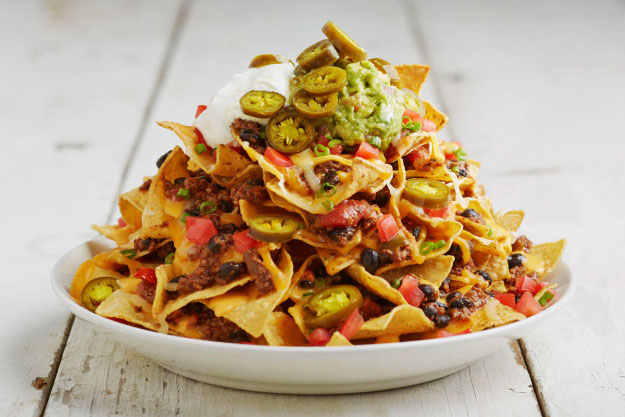 These delicious volcano nachos made with the best ingredients are perfect for a relaxing Friday afternoon. Those who have tried this type of nachos know they are a real explosion of flavor in your mouth; you can mix the tortilla chips with chicken, beef, olives, tomato, different types of cheese, beans, and guacamole. 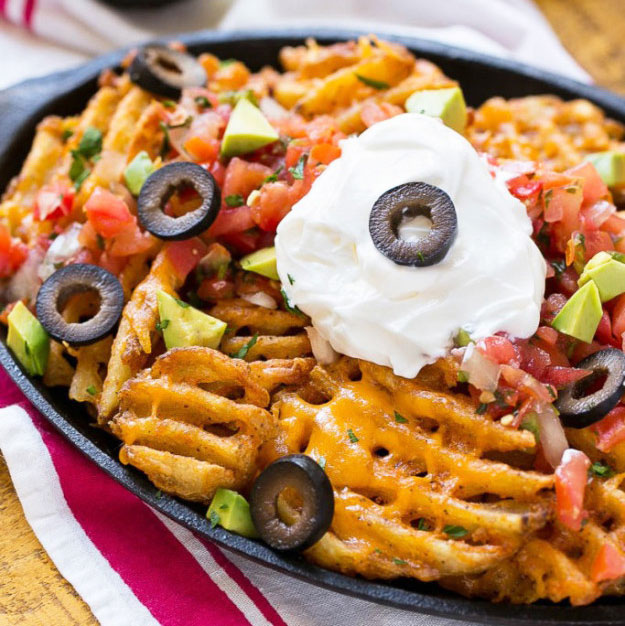 French fries and nachos are incredibly tasty… can you imagine combining these two recipes together? This combination is the perfect appetizer for a small get together or a party. You can even have them for breakfast; everyone will love this delicious recipe! Most people don’t know that “Nacho” is a common nickname for the Spanish name Ignacio. 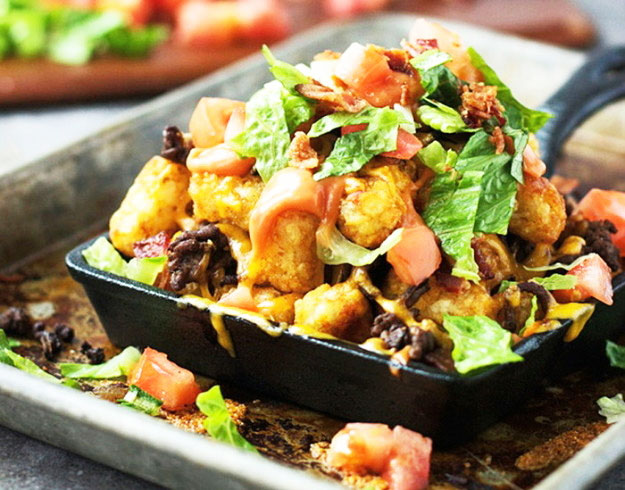 No matter the occasion, nachos can be the perfect dish. These nachos made with tomato, lettuce, beans, and the famous "tater tots" better known as Hash Browns, taste incredibly good. These cheesy chips date back to 1943, they were created in Mexico and nowadays they are sold almost everywhere in the world. 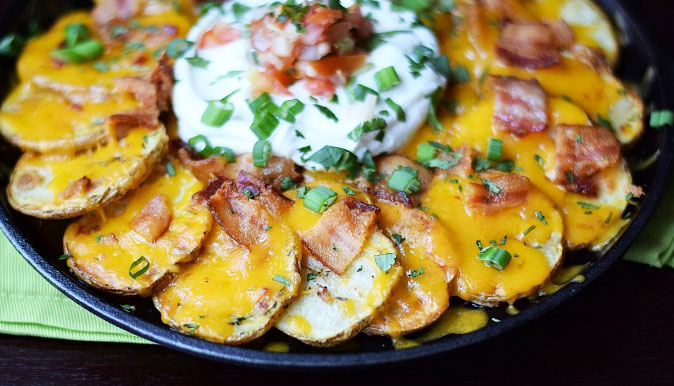 These incredible nachos are made with slices of potato, red peppers, corn, cheese, cream, and scallions. To make your nachos even tastier, you can bake your own chips! Did you know that the first dish of nachos was called “Nacho’s Especiales”? and as the word of the dish traveled the apostrophe was lost. 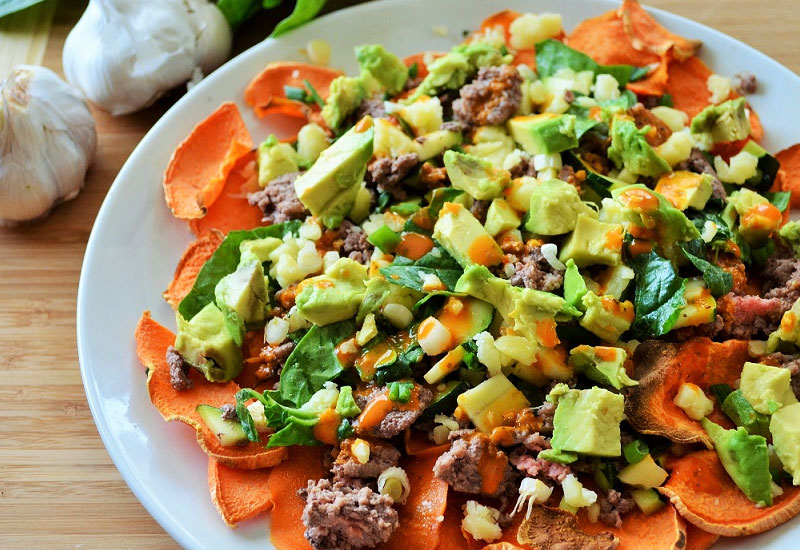 A very creative and delicious way to eat nachos is using sweet potato instead of tortilla chips. Add peppers, avocado, chicken or beef, and cilantro. Some people say that the snack was created by accident when Ignacio “Nacho” Anaya was pressured to create a meal using whatever he could find in the kitchen. 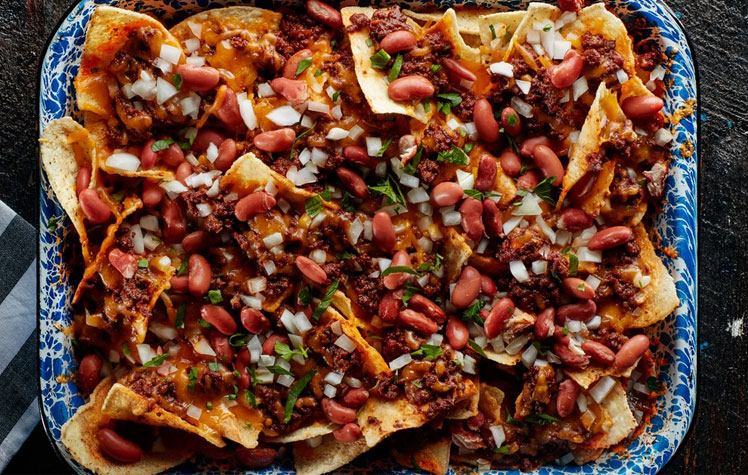 When it comes to nachos, there are no rules. You can add your own favorite ingredients to make them even more delicious. In this case, you can add chili beans and cheese; we can assure you…you won’t be disappointed! 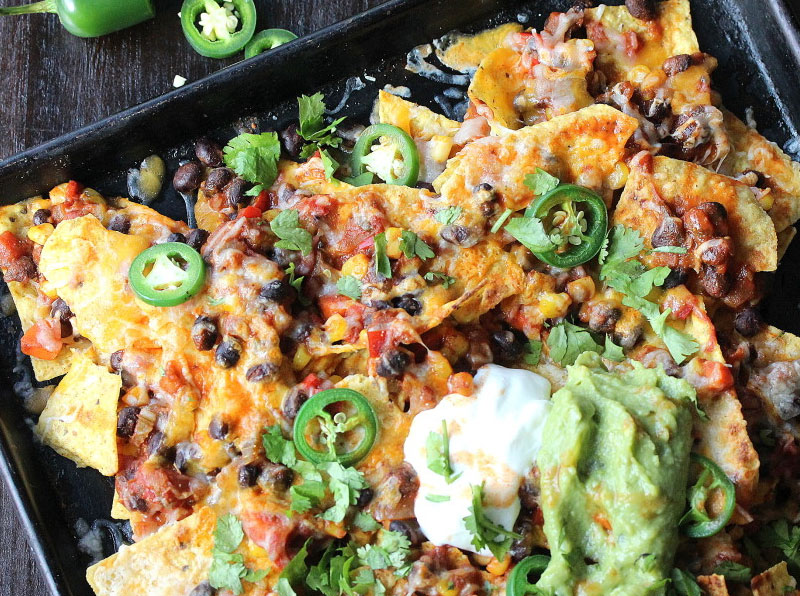 Are nachos still delicious without chicken or beef?  Well, the answer is yes! Vegetarian nachos are delicious; the combination of all the different ingredients is incredibly tasty. All you need is vegetables, beans, jalapenos, guacamole, cilantro, and sour cream. 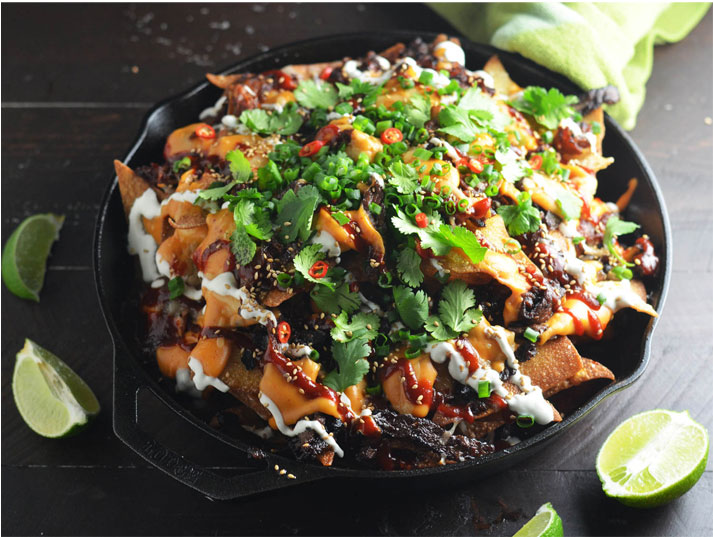 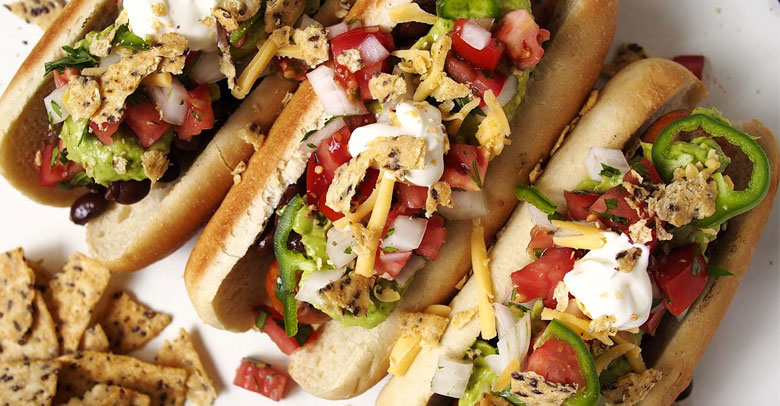 If you want to combine nachos with another dish, then this is the perfect recipe for you! They are very easy to make and incredibly tasty. In order to try this delicious dish, you just need to make a hot dog and add some nachos, guacamole, and melted cheese. 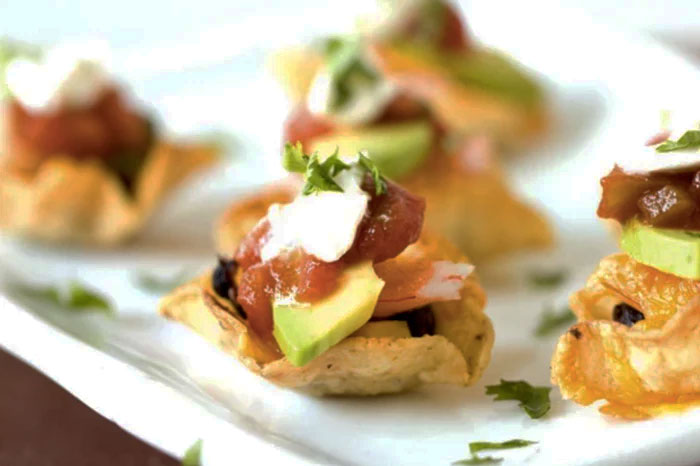 These nachos are the perfect snack, easy to cook and we can guarantee you’ll love them! Add a layer of black beans, corn, shrimp, and cheese; covering the top with avocado, salsa, sour cream, and cilantro.

Nachos with a bit of pineapple 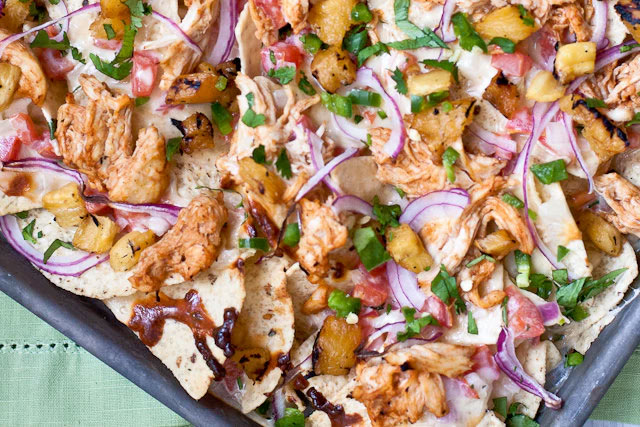 If you like Hawaiian pizza, you’ll love this recipe. These chicken nachos mixed with pineapple are the perfect appetizer for any party; adds some jalapenos and melted cheese to create an explosion of flavor in your mouth. 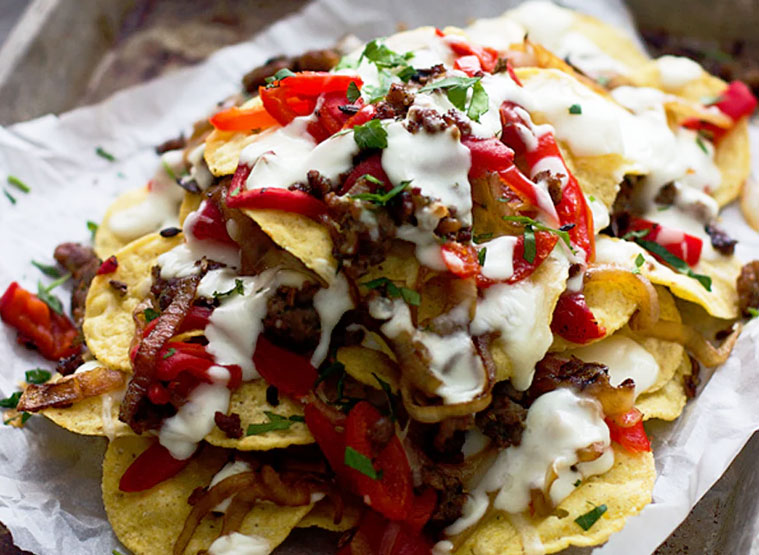 These nachos are made with sausage, provolone cheese sauce and roasted red peppers. You have to make sure each layer of nachos is completely covered with all the ingredients. You have got to try this recipe! 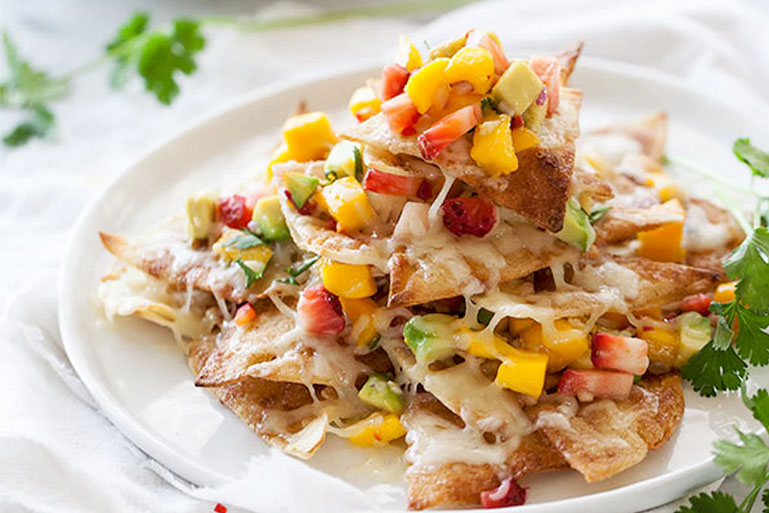 Can you imagine a sweet version of nachos? Yes, it sounds like the craziest dish ever. This dish is made with strawberry, mango and avocado so it is definitely a healthier option. To sweeten the nachos you should only cover them with a layer of butter and sugar and then add the fruit, you can also add a sweet sauce. 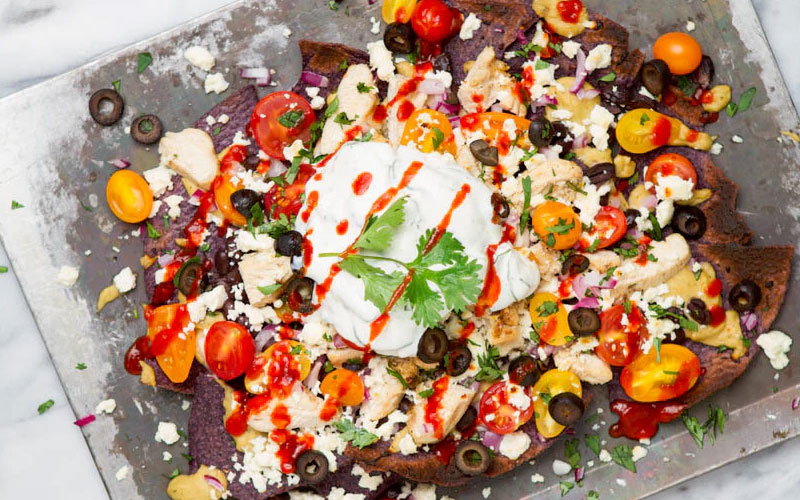 These nachos can be prepared for any occasion; all the different ingredients make it a delicious dish. The tortillas chips are mixed with mashed chickpeas, black beans, chicken grill, cherry tomatoes, onion, cheese, cilantro and black olives. 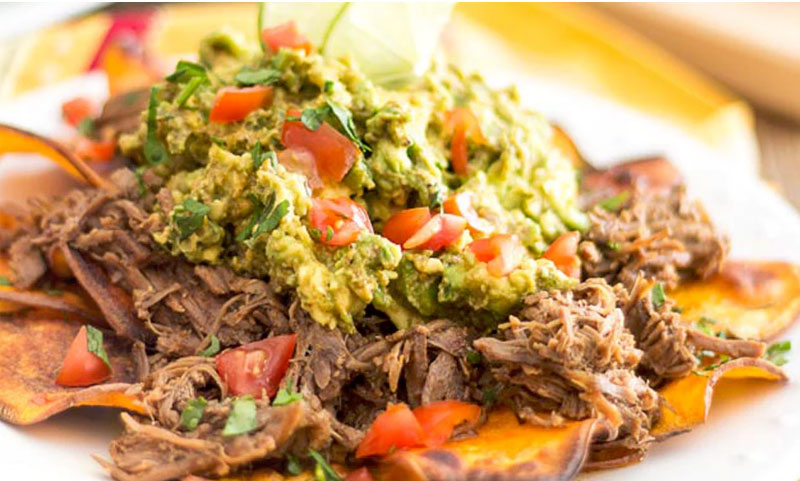 We all know that Mexican food is one of the most delicious cuisines in the world; the dishes are full of different spicy flavors. These tortilla chips are topped with lamb meat, guacamole, tomato and lemon juice; Holy moly… they look great! 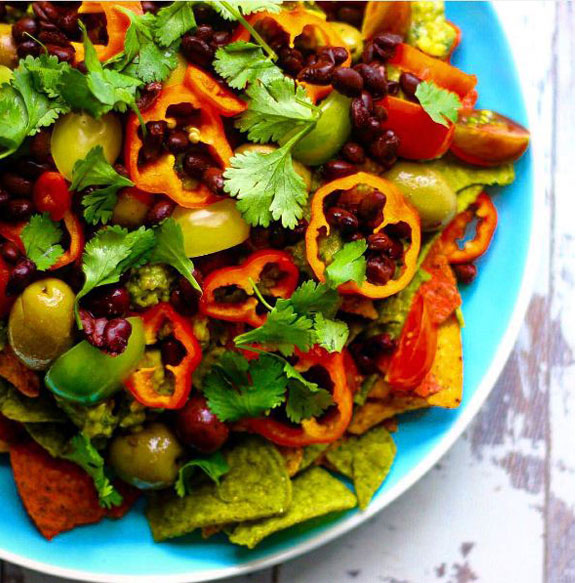 Another healthy way of eating delicious nachos is this vegan option. These nachos are topped with cilantro, peppers, tomato and olives. Here’s another interesting fact about nachos:  In 1949, the dish was first mentioned in English print in a cookbook that gave credit to the original creator. 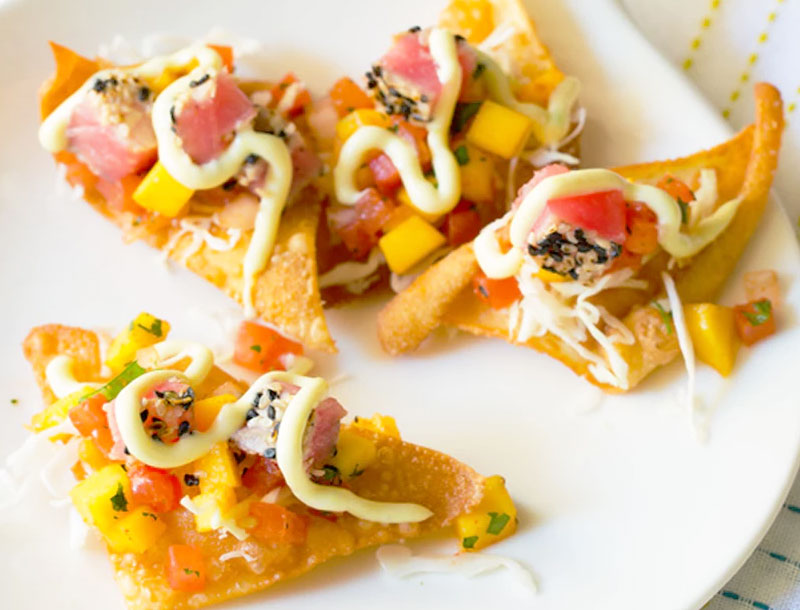 If you are one of those people that are not afraid of trying new things, then you have got to try this recipe! This Japanese version of nachos is really delicious, just use wonton instead of tortilla chips, then add fried tuna, shredded cabbage, mango sauce, mayonnaise, avocado, and wasabi; a different but tasty recipe. 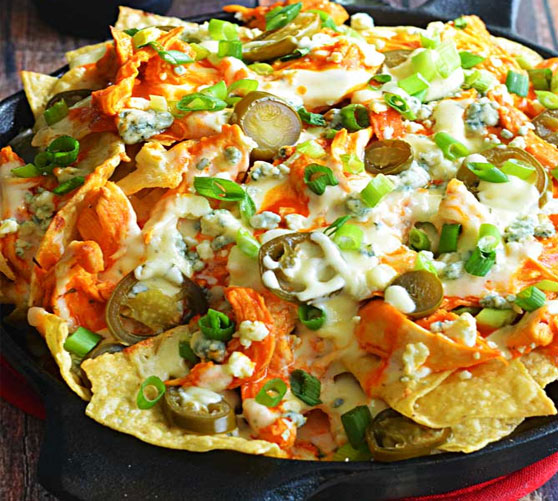 If you are looking for a healthier way of eating nachos, this dish has many ingredients that help you stay in shape. You just have to mix the pumpkin with onion, some chopped tomato, garlic, lemon juice and jalapenos to add a bit of spice. 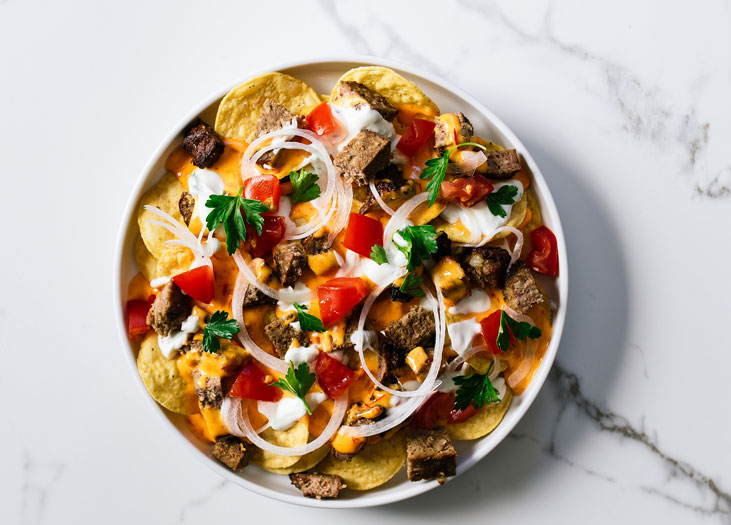 This delicious recipe is the Greek version of nachos. It is made with ingredients like lamb, chopped cucumber, tomato, feta cheese and olives. This is the perfect snack if you want to stay home watching a movie. 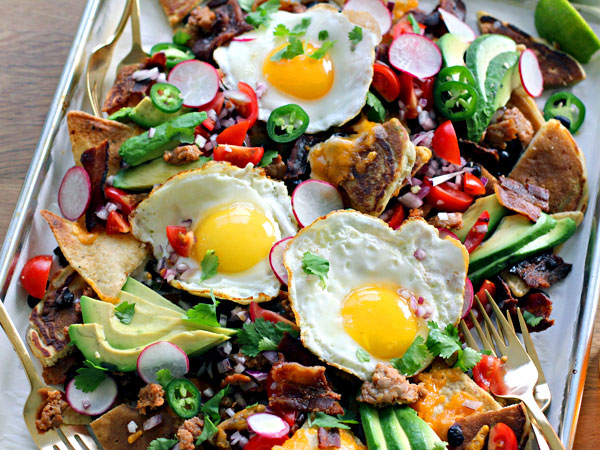 Breakfast is the most important meal of the day because your body needs the fuel to get all your daily tasks done. The dish is made with ingredients like fried eggs, jalapenos, avocado, beans, and parsley; it is a great way to start the day off right!