This is how Tennis Fashion has evolved throughout the years

Perhaps when you think about Tennis, the last thing that comes to your mind is tennis attire… you know, those polo shirts, or skirts and shorts men and women wears. However, if you’re a fashion forward person you may think that tennis clothes are cool. Can you imagine how different they were from the little skirt and v neck t shirt athletes wear now? Even tennis rackets changed a lot!

Here is a look of how much tennis outfits have changed throughout the years… they’ve changed a lot! 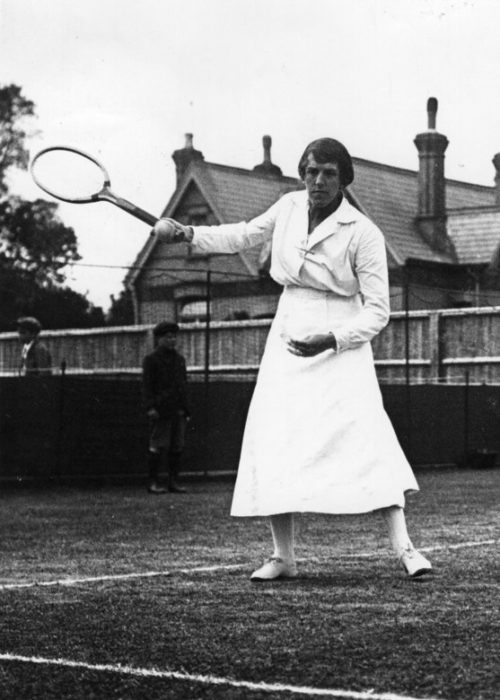 Pinterest
Look at this long skirt and that shirt! I don't get how girls could be comfortable with those on. I mean, tennis is an exhausting sport I can't imagine how tiring could be playing it with that amount of cloth on you. 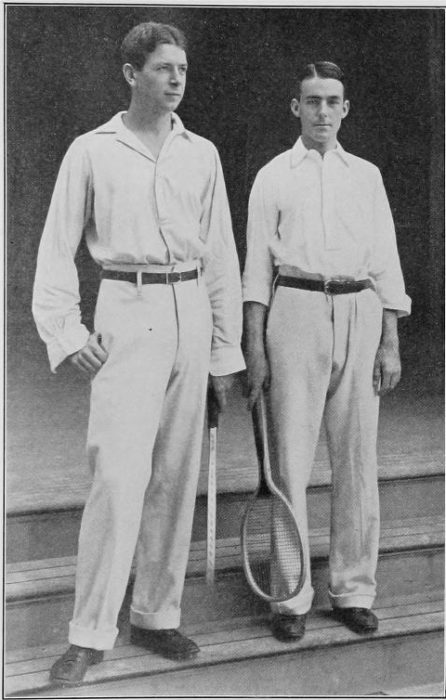 Pinterest
This men look too formal to be playing tennis. Don't you think? It looks more like a golf player outfit right? I mean the shirt, those dressing pants.... 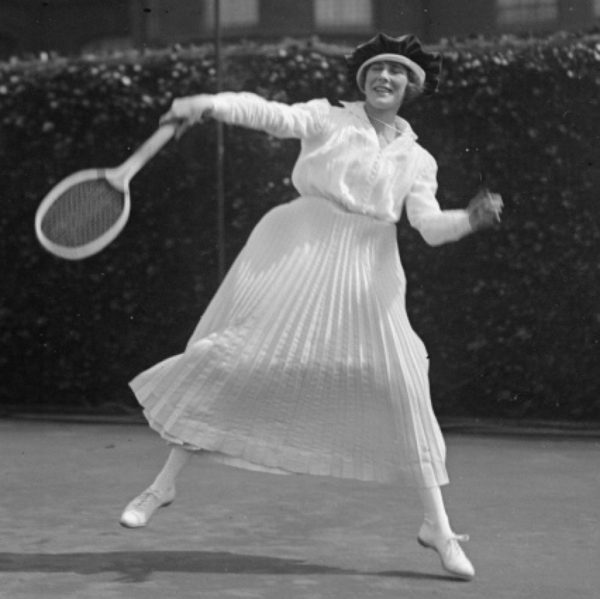 Pinterest
Well, this skirt is much more loose than the other one as well as the shirt. However, it still looks like other sport! I definitely can't imagine wearing something like this and jumping all over the tennis court without short tights. 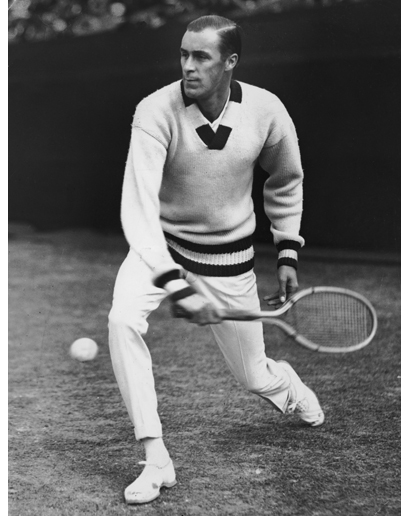 Pinterest
Well this outfit's pretty cool for me. I mean it looks much more conformable than the girl's. However, the racket seems to be made out of wood or something heavy which makes hitting the ball much more difficult. 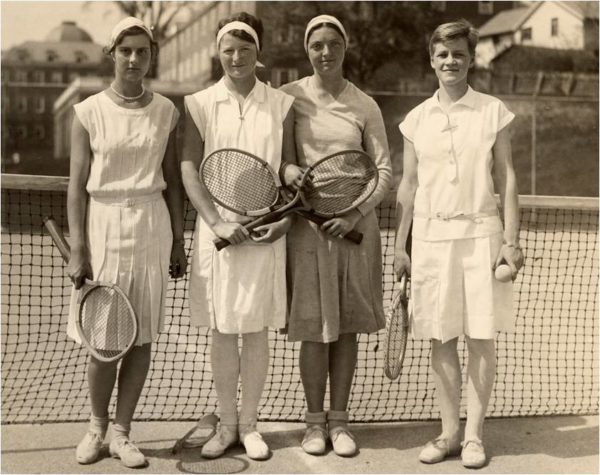 Pinterest
Skirts are a little shorter as well as shirt's sleeves. We are approaching to today's outfit little by little. This one looks much more comfortable. However, it is far away from that cute little skirt we have in our heads right? 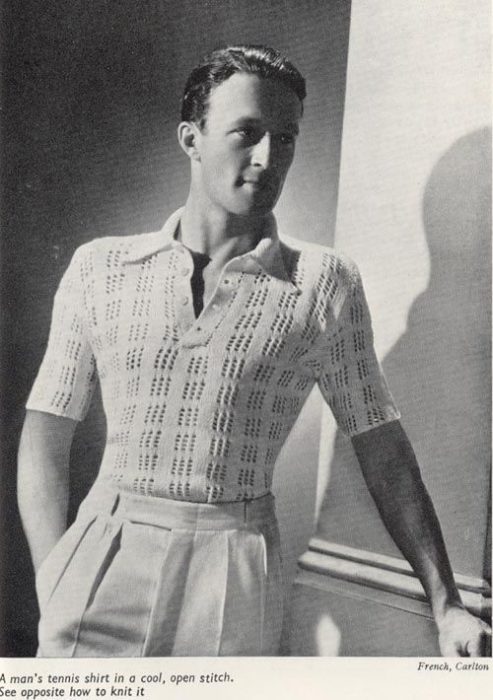 Pinterest
This one looks more stylish than a sport's outfit. I mean, c'mon what does that high waist pant mean? I don't know if maybe is the guys face or his whole look that makes me doubt if it's a tennis outfit or what? 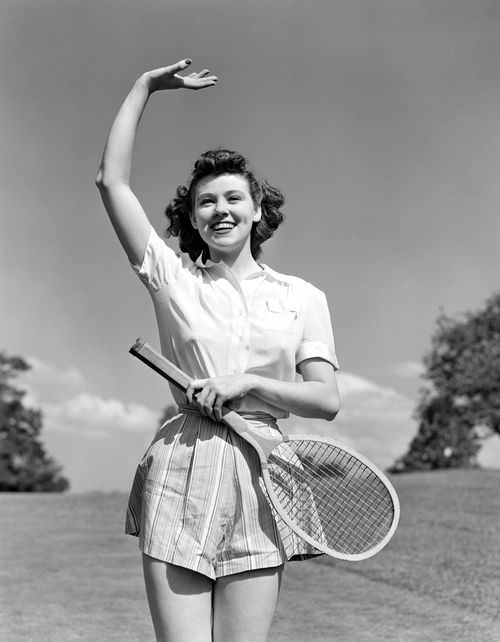 Pinterest
I love this one! The perfect mix between style, sport and tidiness. Short hair, high waisted shorts and that t shirt. Simply beautiful. with no doubts, a cool vintage outfit girls would wear nowadays! 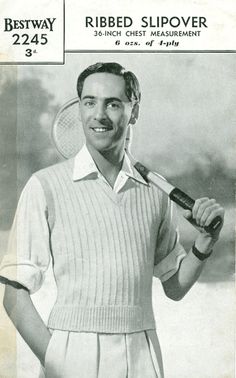 Pinterest
In men, totally different thing. I definitely think vests are not a sports item at all. I mean it looks too tight to me. Just too uncomfortable. Perhaps if it's a cotton vest can help. However, I wouldn't choose it at all. 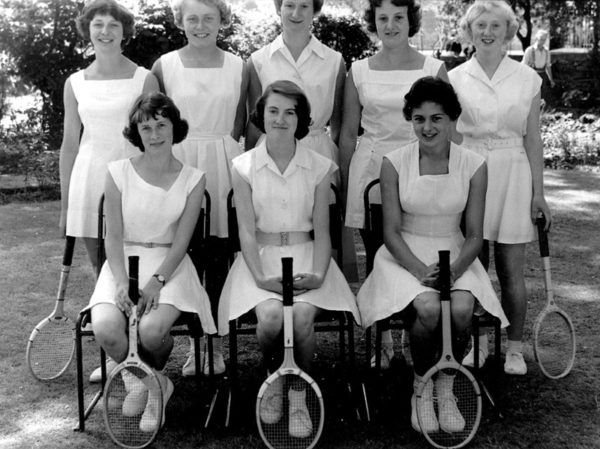 Pinterest
It's surprising the different neck cuts we can see right here. It looks like all of them are from different sports, right? However, they definitely look as tidiest they can be... 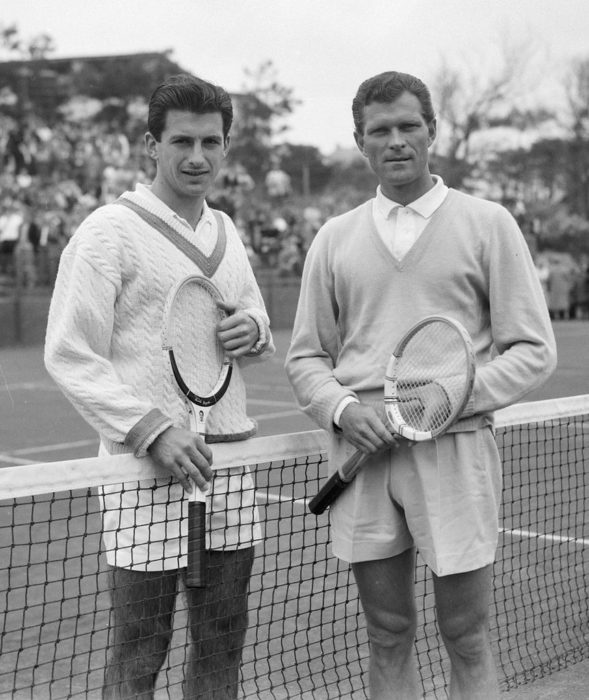 Pinterest
They definitely look comfortable which for me, is one the most important things when deciding what to wear for playing a sport. The v neck sweater and the short pants seem to be the best way of tackling the sport. 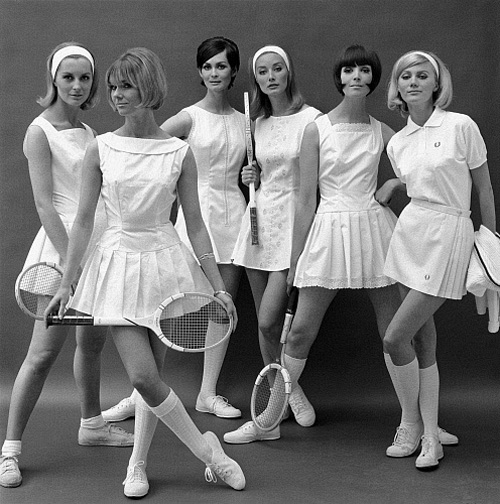 Pinterest
Oh c'mon! Look at how sleek this group of ladies look... I definitely want to dress up like this girls. Just look at them, they couldn't be cooler if they tried. Those high socks combined with the table skirt look gorgeous. 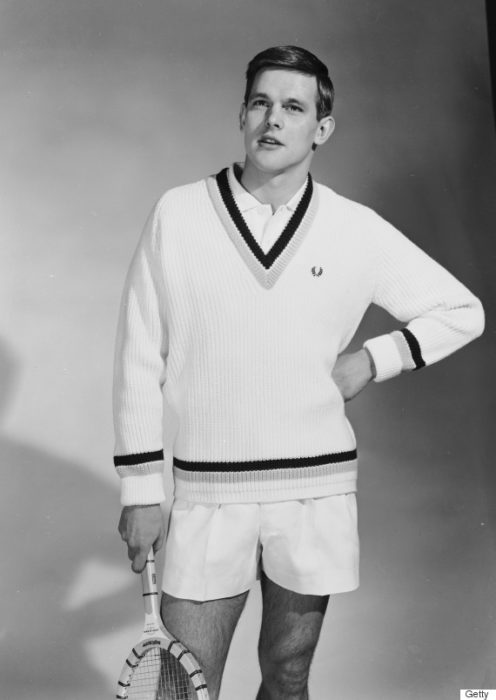 Pinterest
This one as well looks much more comfortable than the older outfits. I mean short pants and that stylish but appropriate v neck sweater looks perfectly right to me. 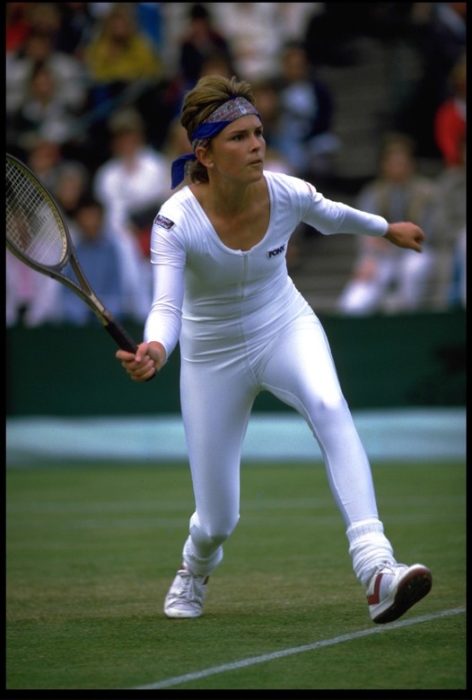 Pinterest
Headbands, colorful striped polo shirts, and short shorts. Love it! Happy outfit, although it looks tight its kinda 90's so, in my opinion, it's really cool. Would you wear it? 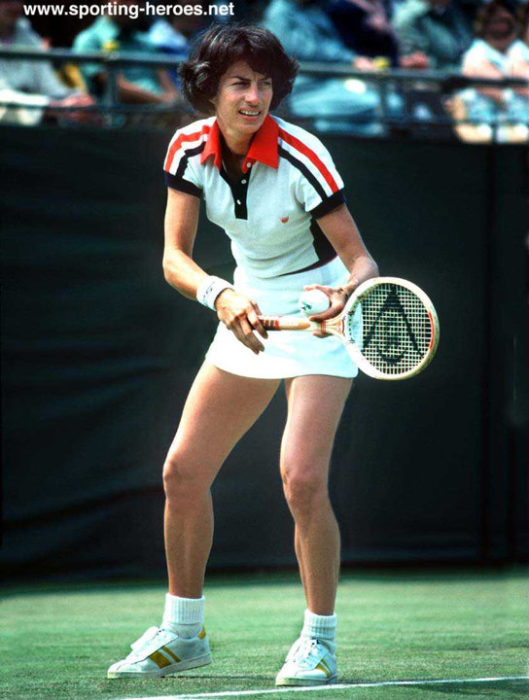 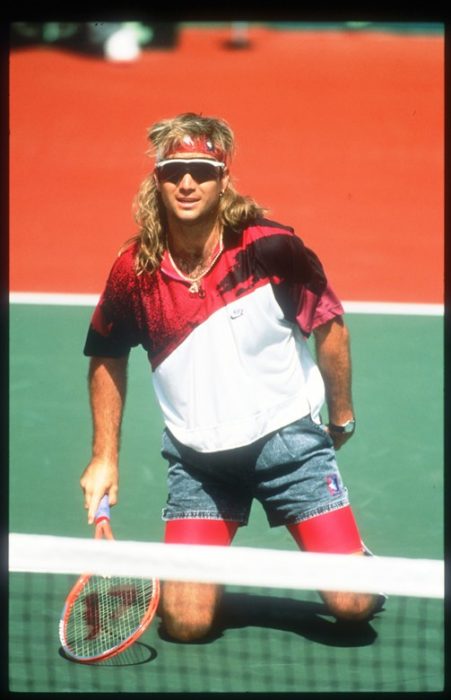 Google
What is this? OMG. This is simply wrong. Apart from the headband which is something I definitely like, all the outfit appears to be a whole mess. I can't finish figuring out if it's the colors or just the whole thing together that bothers me that much. 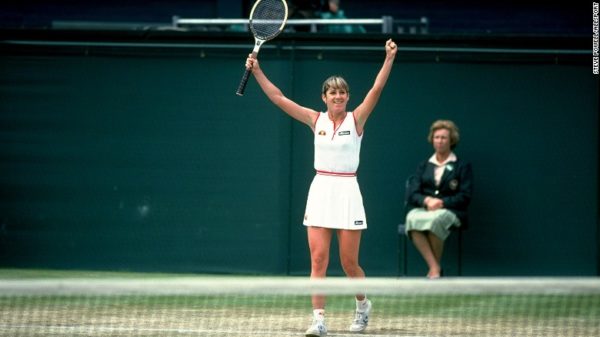 Pinterest
Anne White, the American tennis player wearing a white straight outfit with some color in her waist. Hello Annie! Nice outfit right? She looks as if he has just won..ok, we give you one more point for that! 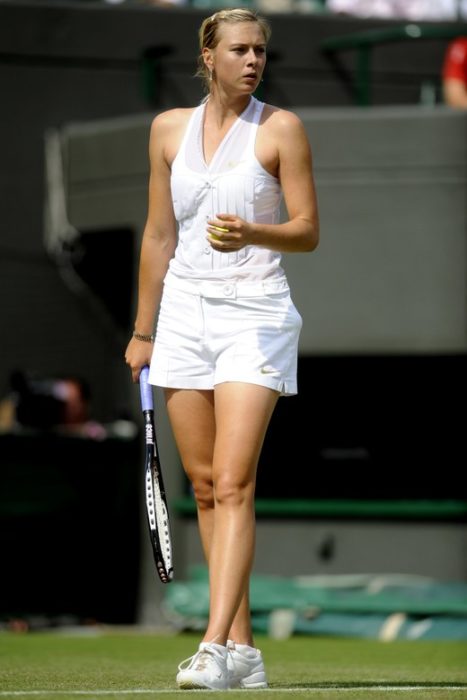 Pinterest
Weirdly I don't like that t shirt at all. I think it's too loose or maybe it's not the right one for tennis right? That v neck is too long for her. Not to talk about those shorts, definitely not right... 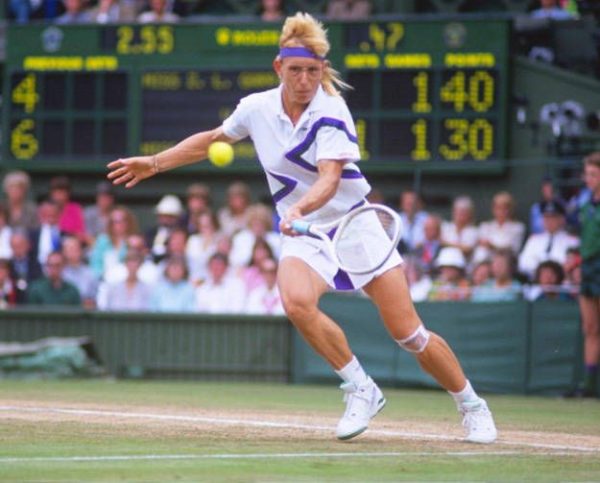 Pinterest
Coolest ever. Violet and white mix of colors just wonderful. That headband's perfect, comfy and mixes perfectly with all the outfit. Those weird stripes in the t shirt are really cool and don't seem to be bothering at all. 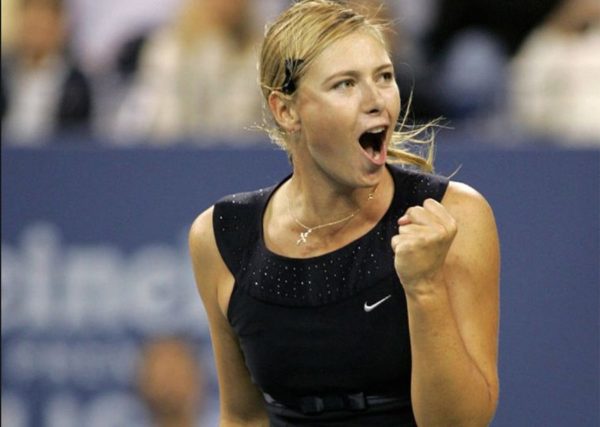 The wonderful Maria Sharapova. One of the most known tennis players in the whole world. She is wearing Swarovski crystals OMG I definitely do not think that was necessary. However, I won't lie they look pretty in her :) 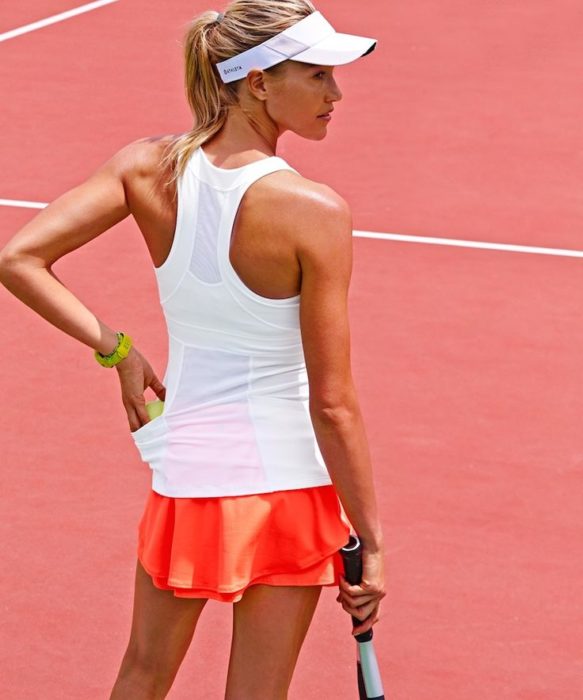 Pinterest
Nowadays, tennis players are changing their way of dressing up when it comes to this beautiful sport. They are adding more color and texture to their whole look. I feel like vibrant clothes attracts better energy so they are absolutely taking the right path :)
Compartir este artículo
Mundo.com