His ex-wife took everything, but left him the most important | Mundo EN
Animals

His ex-wife took everything, but left him the most important

“While I was watching the empty walls next to my best friend Jimmy, inspiration came to me and I started photographing my dog, when I realized how happy he was walking around the apartment. I drew a new world around him and felt, inside of me, the latent desire to draw”

The artist creates a whole series of pictures with different themes. Now has more than 200 thousand followers on Instagram and in October will be available a book with the best photographs of Jimmy.

Left him the most important 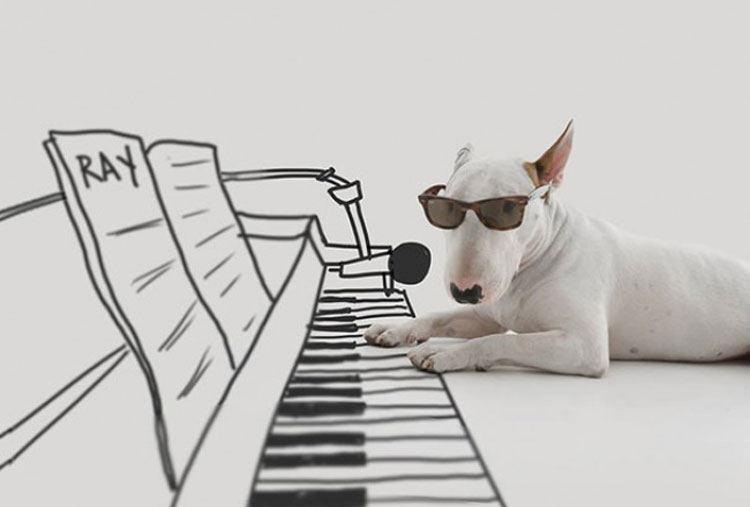 brightside.me
His ex-wife left him on his 30th birthday and took all of her things. Leaving the apartment completely empty, the only thing she left was this cute dog named Jimmy Choo. 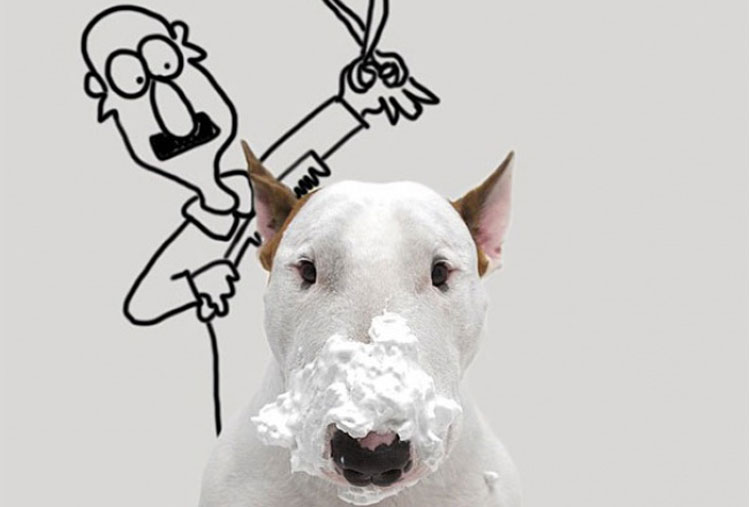 brightside.me
Jimmy Choo is the faithful friend of Rafael; the dog offered a paw and posed for this amazing and funny photographs.

She broke his heart, but not his dog's 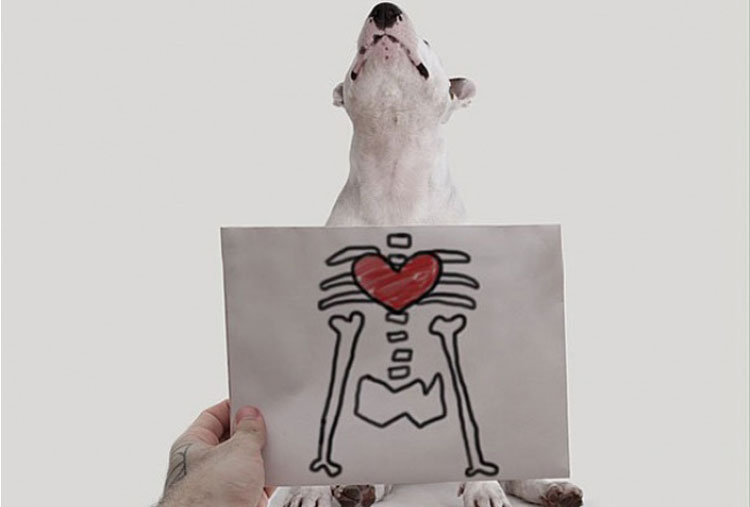 brightside.me
An artist who teaches that we should look on the bright side of things, although everything seems bad, you must face problems with humor.

brightside.me
All that what’s left to Mantesso was his Bull Terrier and his creativity. This four-legged friend inspired him to paint and draw again, something he had put aside long ago.

As strong as his owner 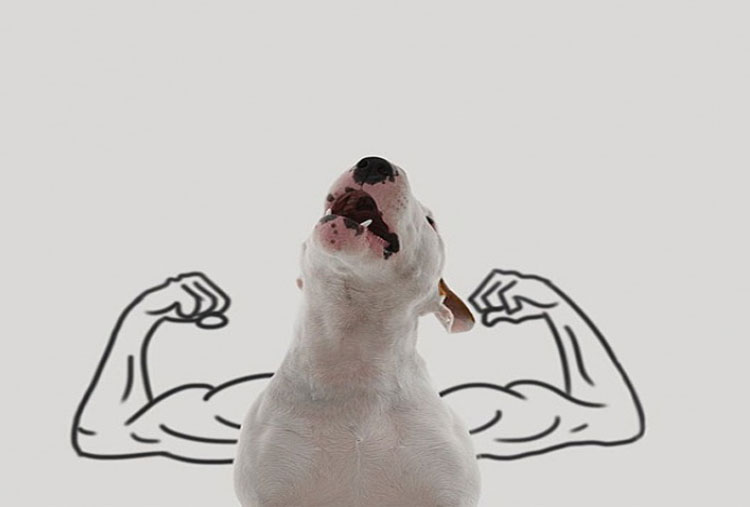 brightside.me
The Bull Terrier’s was originally use as a fight dog, but he actually is a companion dog. They’re an amazing breed, by their behavior, personality and the love they show to their owners. 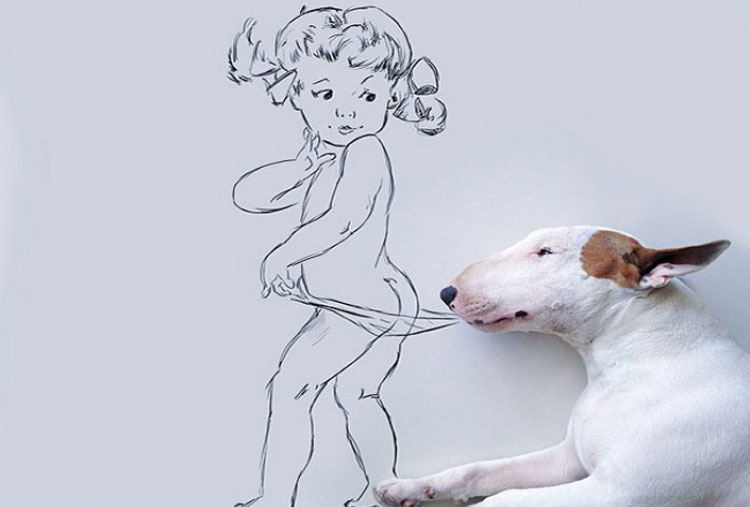 brightside.me
The Bull Terrier dog breed usually shows great energy in every situation. He might not look agile but he actually is.

I'm not a good singer but I love it 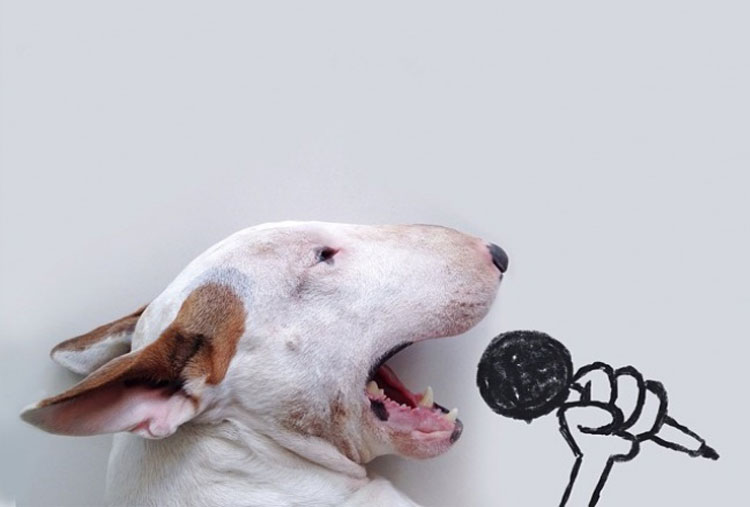 brightside.me
His ex-wife has no idea how leaving the dog, got him over that break quickly and in a very happy way.

Who is Jimmy Choo? 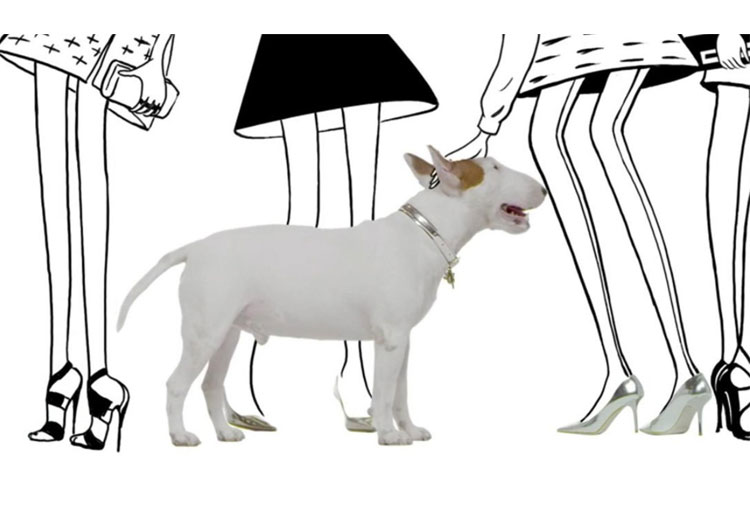 brightside.me
The name Jimmy Choo was choosen by the former wife of this great artist. She’s Asian, works in the world of fashion and likes the brand Jimmy Choo. 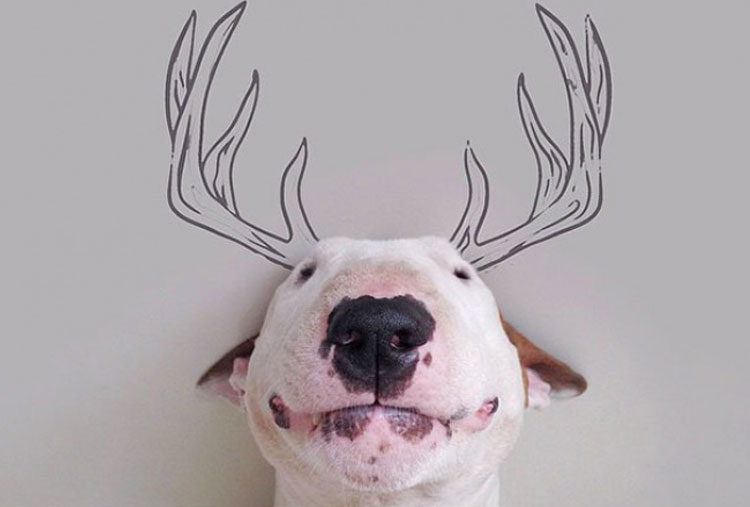 brightside.me
Jimmy Choo is certainly a lovely dog, no doubt he enjoys spending time with his owner becoming the protagonist of his witty drawings, he turns into a rock singer, a famous musician and even an excellent skater. 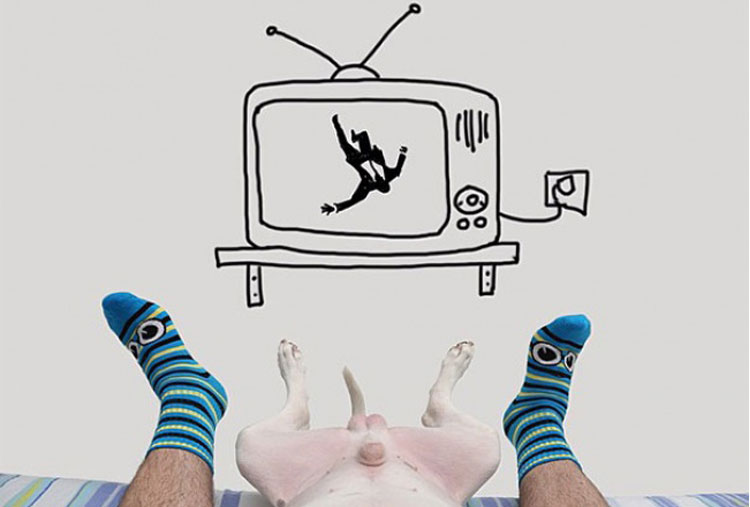 brightside.me
Important studies reveal that the interaction between a person and their pet in difficult times, reduces stress and relieves loneliness, causing a feeling of well-being. 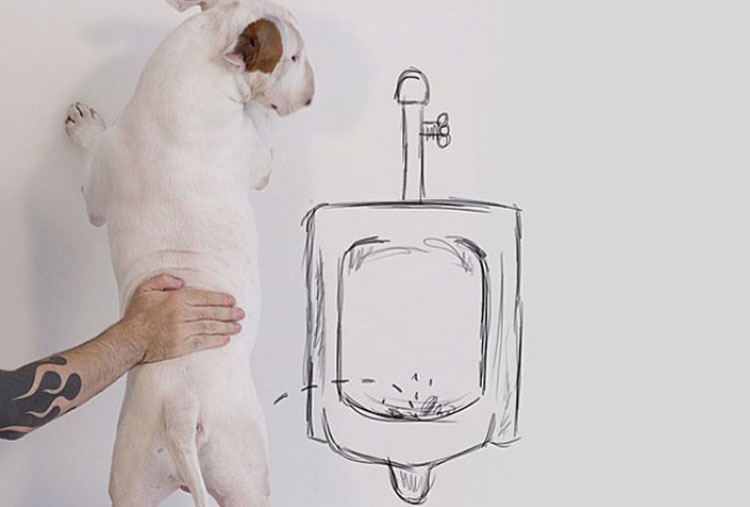 brightside.me
This ingenious artist spends most of his free time taking pictures of his beautiful Bull Terrier in all kinds of situations. He then adds some drawings to the images, creating funny scenes later published on his Instagram account. 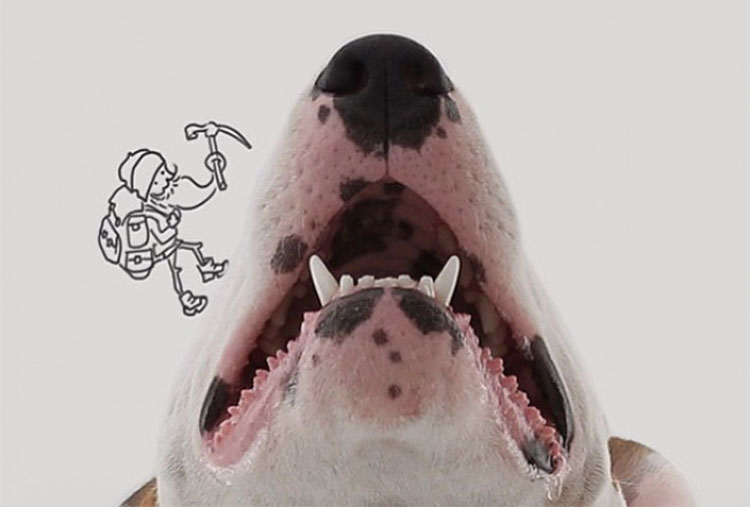 brightside.me
Thanks to the funny album created with photographs of Jimmy Choo, it currently has more than 475,000 followers on Instagram. 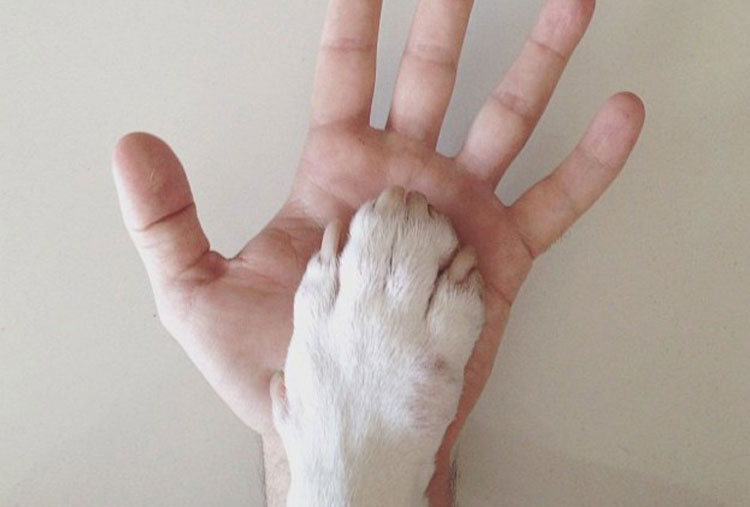 brightside.me
Mantesso says: "One day I was playing with him in the room and decided to take a picture clutching his leg, showing affection and friendship between us. That picture led to the idea of the others" 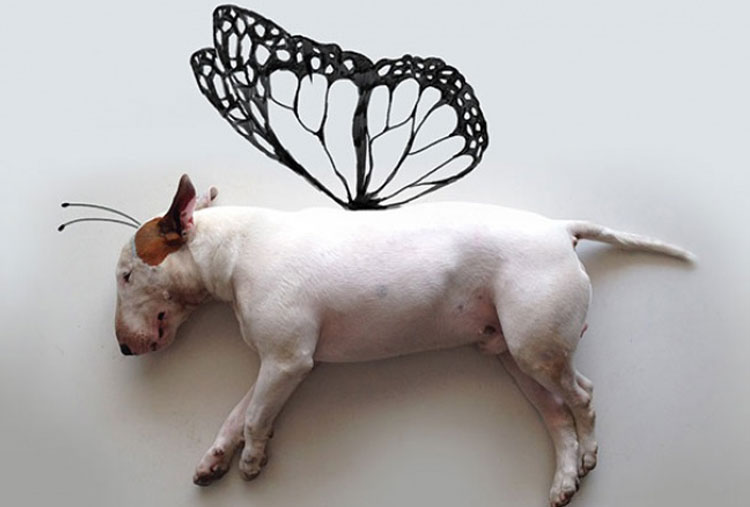 brightside.me
The photographs are taken at midnight for two reasons: first by the lack of light, it improves the camera's flash; and the other reason is because that's when Jimmy is already a little tired and can sit still in one place.

An awesome artist without a doubt 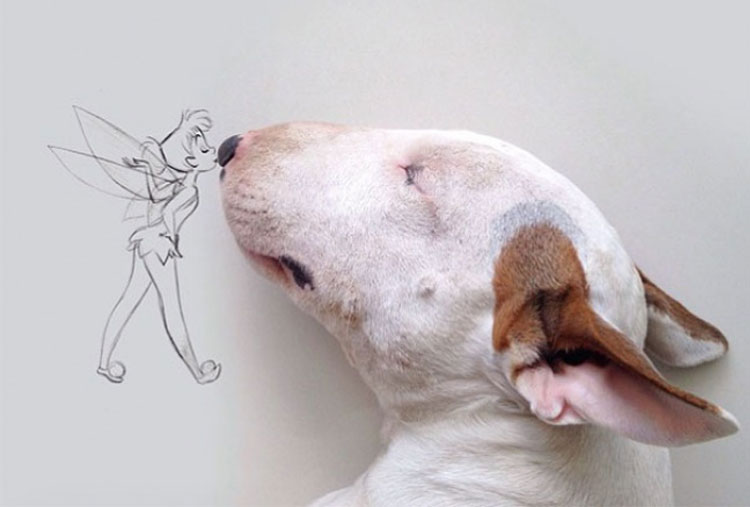 brightside.me
Rafael Mantesso is a founding member of Ata Institute, responsible for several communication projects, and after the photos with his best friend, published a book called “A Dog Named Jimmy”, which soon became best-seller on Amazon.

Am I famous now? 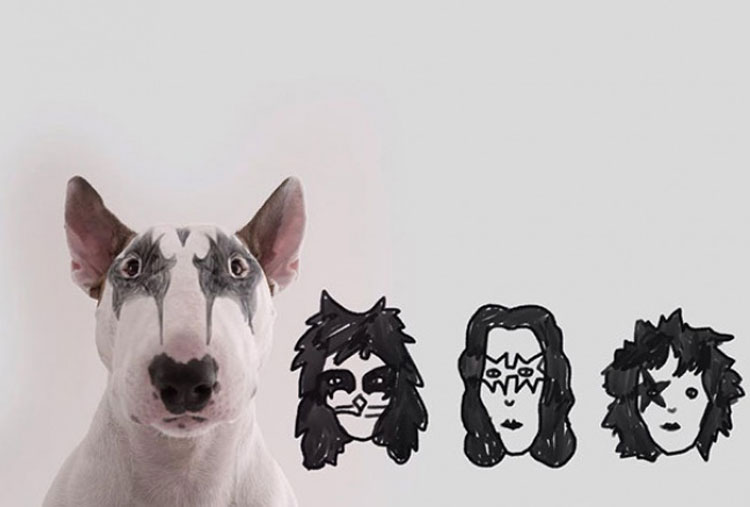 brightside.me
Thanks to these photographic creations, Raphael and Jimmy managed to draw the attention of Sandra Choi, creative director of Jimmy Choo, to create a collection of exclusive accessories with Jimmy as an image, Awesome!

He loves being the center of attention! 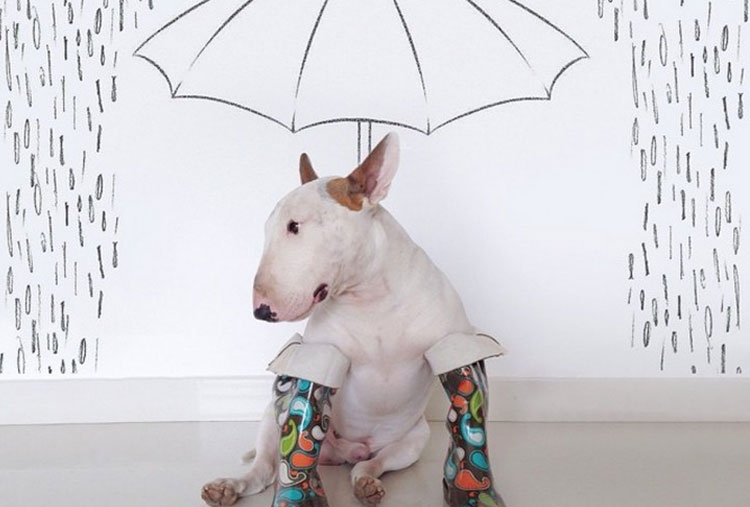 brightside.me
"He loves to be the center of my attention and, for me, the time to work with him is playtime" Rafael Mantesso on his adored and pampered Bull Terrier.

A friend for Jimmy 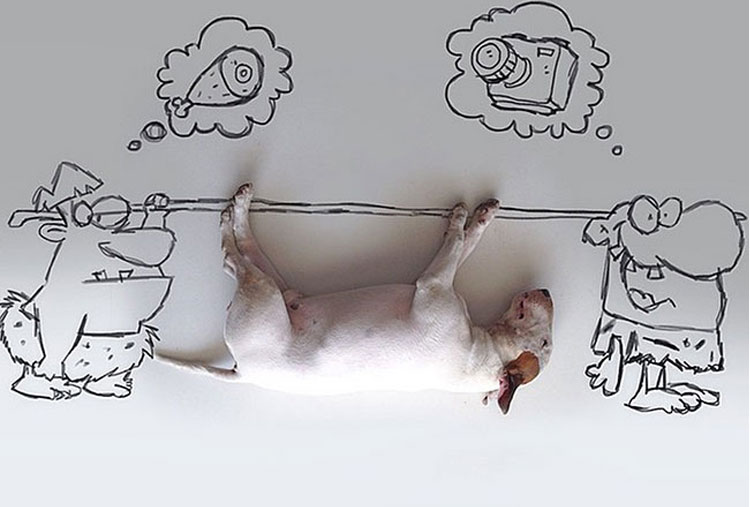 brightside.me
Apparently, the owner and creator of the photographs of this lovely dog is thinking about bringing a new real friend for him as soon as possible, to create more photographs, but for the moment is a secret.

brightside.me
This story gives us a big lesson about making the most of every situation, and that despite all, we will never be alone. A furry four-legged friend can become our best companion.
Compartir este artículo
Mundo.com