Check out these hilarious before-and-after pictures of stylish dogs

Professional photographer, Grace Chon is a huge fan of animals, as she said in an interview, she has always liked the before and after photos of dogs’ grooming , she thinks it is interesting how dogs can change so much  with a different haircut, it’s as if they were two completely different animals. Because of this, Chon decided to do a photography session of these little cuties.

“These cuts are works of art – each haircut takes hours as the majority of the styling is all done with hand scissoring. All the dogs in the series were groomed by the incredibly talented groomers from Healthy Spot in Los Angeles, CA. Many of the groomers there specialize in this style of cut and have been trained by masters from Japan.” said Chon. 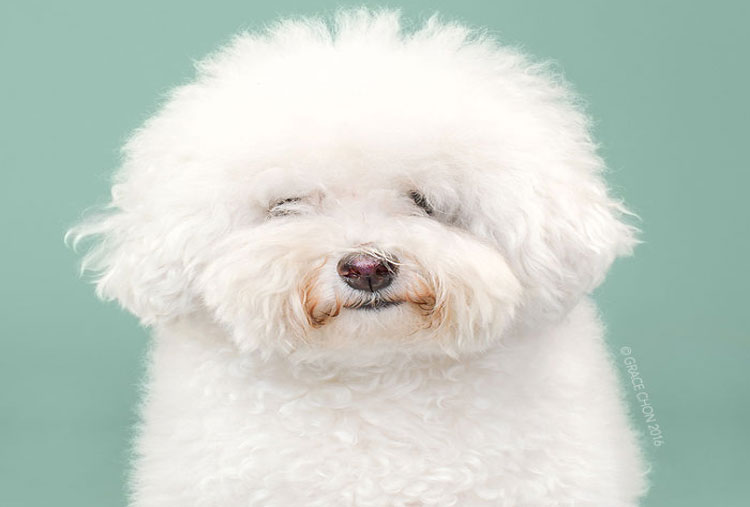 This white little dog has a hard time keeping his coat clean all the time. Food and dirt can make his hair look like it’s been weeks since his last grooming. Corn starch can help absorb excess oil and helps cover up light stains on your dog’s white coat. 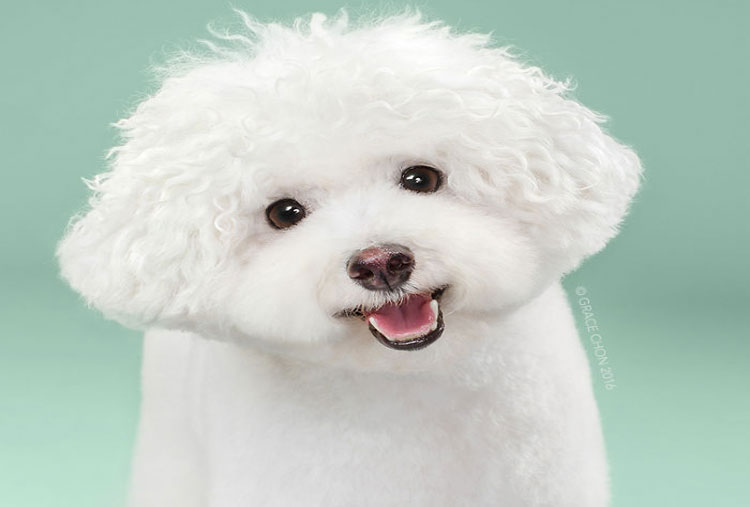 A picture is worth a thousand words, and judging by this photo, our white little friend loves his new look! He looks as excited as one can be and his hair looks like white cotton. Another way of getting rid of heavy stains on your dog’s coat is making a thick paste of baking soda and water and spreading it over the stains. 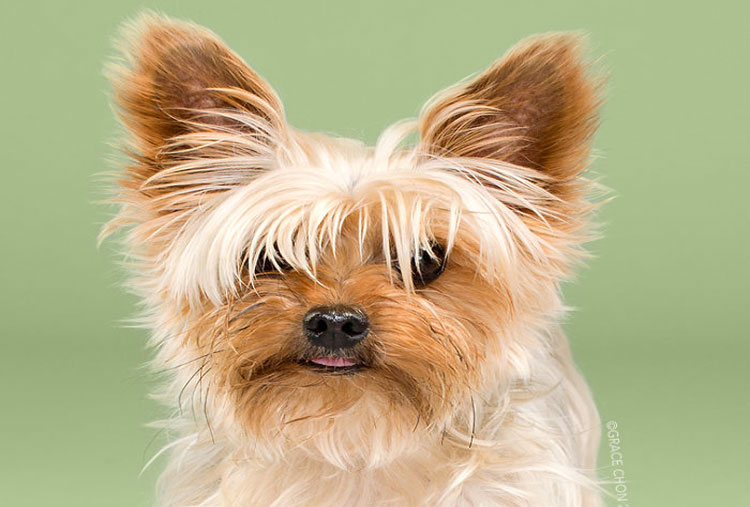 The Yorkshire Terrier is one of the most popular dog breeds for people who like to carry their dogs anywhere they go, this is because if their small size and their gorgeous little face. This little one is ready to get a haircut, and we all want to see the results. 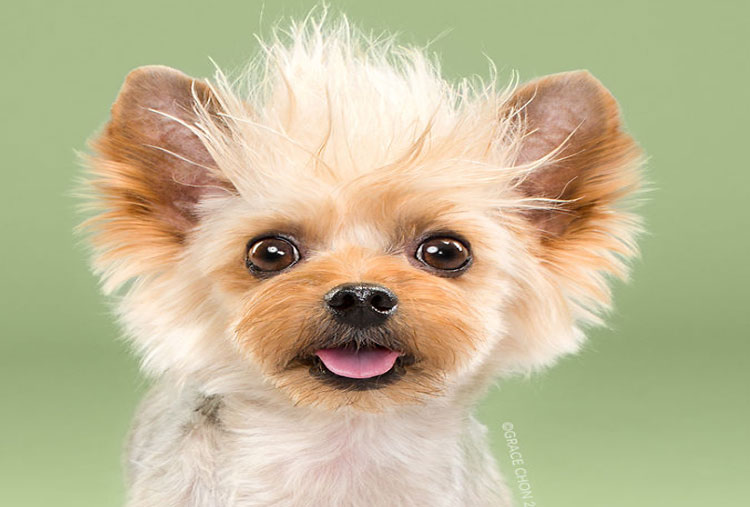 This Yorkshire Terrier looks extremely different! He looks like he belongs to a completely different type of dog breed. Now that all that hair is off his face, he looks really shocked to see everything around him more clearly. 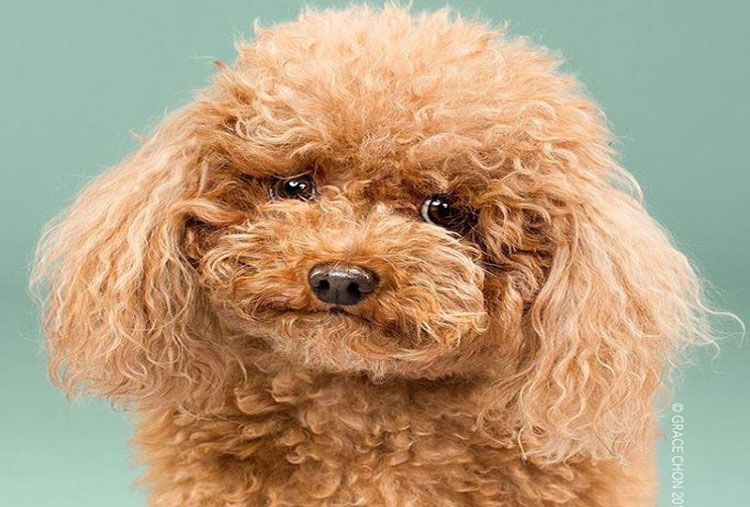 This little one is having trouble with her hair; apparently, her owners don’t brush her hair very often. This breed tends to have very tangled hair, so vets recommend giving these dogs a bath at least once every month. His hair might be a mess, but she is one of the most adorable dogs ever! 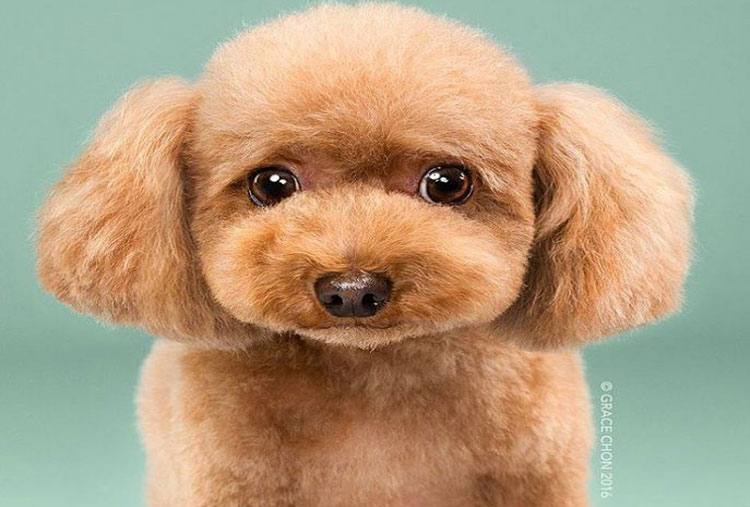 It is almost impossible to believe that is the same dog, a bath, and a haircut made a huge difference for this hairy buddy. Now he looks ready to be on the cover of any magazine, thanks to his new sophisticated look. 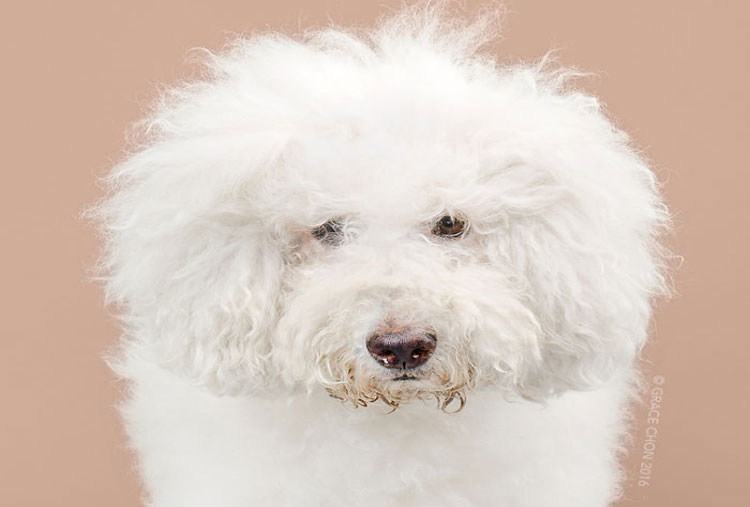 Oh, this white dog is too cute! But we wonder why she’s got that sad look on her face. Maybe she doesn’t want a haircut or she simply doesn’t want his picture taken. Her owners should try to use corn starch on that mustache to get rid of those brown stains. 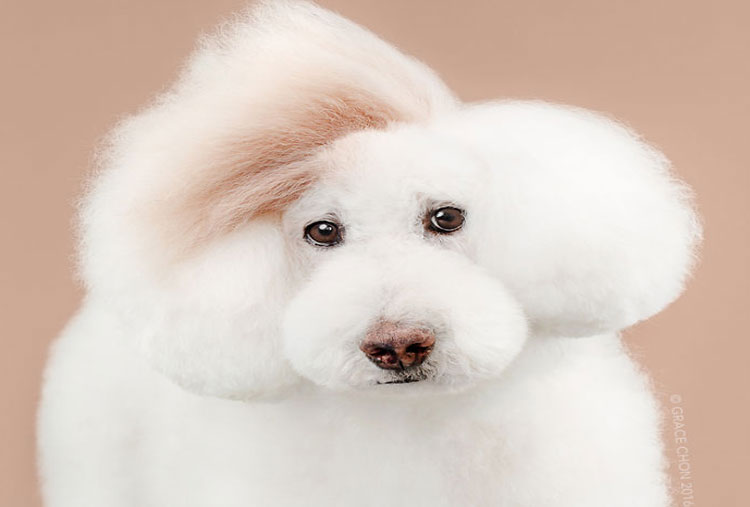 Well hello there! Look at her, she looks awesome! Her puffy hair looks so clean and white. Her brown mustache is gone and she even got a pink strand of hair. Even though she doesn’t seem too excited about her new haircut, she looks amazing.

Someone needs a haircut 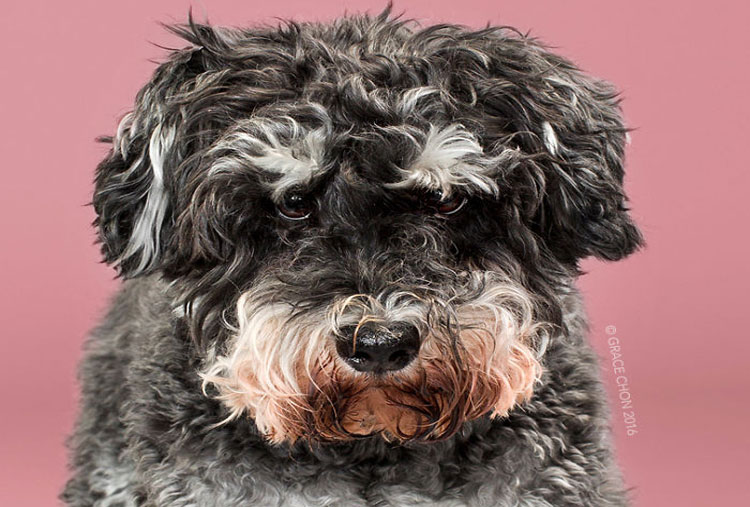 This little schnauzer desperately needs a makeover, even though his hair doesn’t look that messy, a new haircut can help him look ten times better. Usually, this breed has a very classic style, with shorter hair on the back. 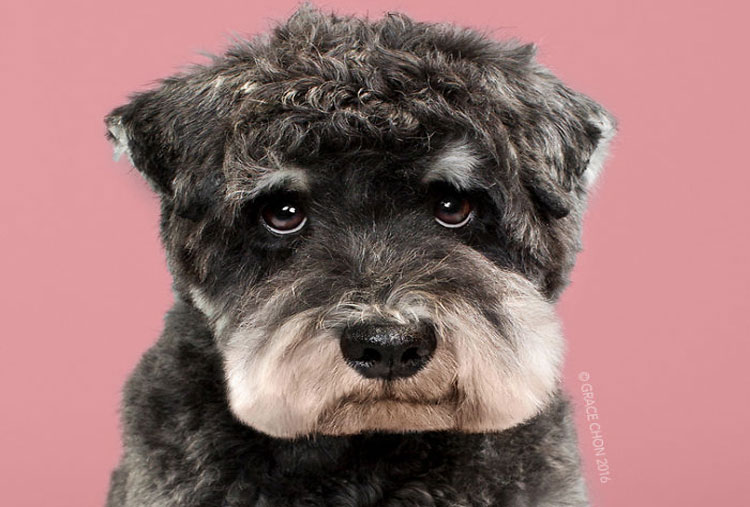 This is definitely the style that better suits this Schnauzer; they could not have picked a better haircut for him. We still don’t know why he still has that sad expression on his face; maybe he liked having long hair, anyway, he looks awesome! 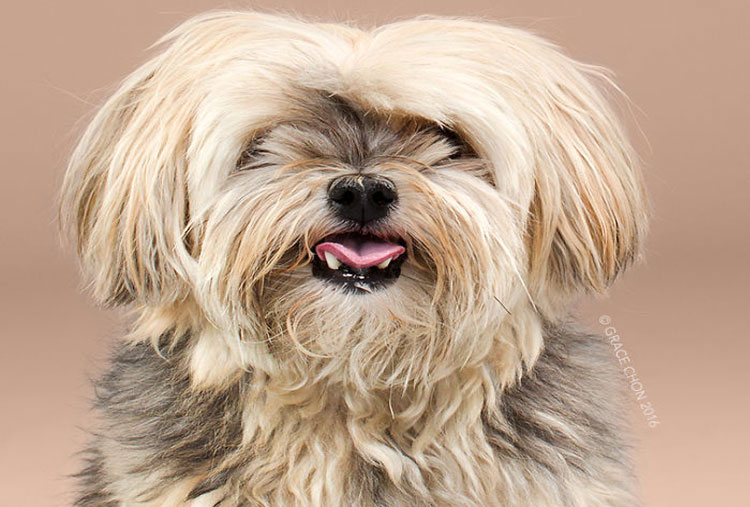 This cute furry friend has difficulty seeing because of the amount of hair covering his eyes, even though he looks very adorable, he really needs a haircut. Most people don’t know that heavy hair can cause damage to the skin around the eyes and mouth. 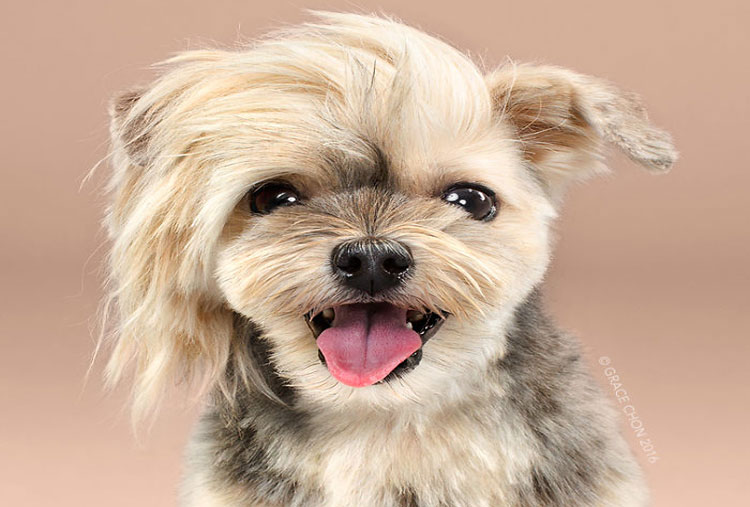 This new haircut made this cute dog look a lot younger and cooler! And judging by the way he’s posing he’s really feeling confident with it. It’s amazing how dogs can look so different because of a haircut. Can you imagine how expensive it must be to pay for such a stylish grooming? 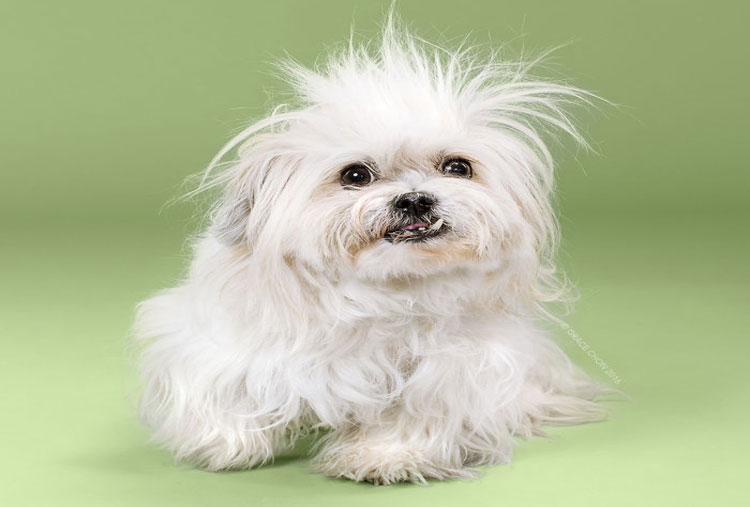 This little dog probably likes the "morning look" you know, when you just got out of bed and you haven’t taken a shower. Although he looks really cute we believe it is time for a change. Oh, and his little teeth are way too adorable!

He looks much better 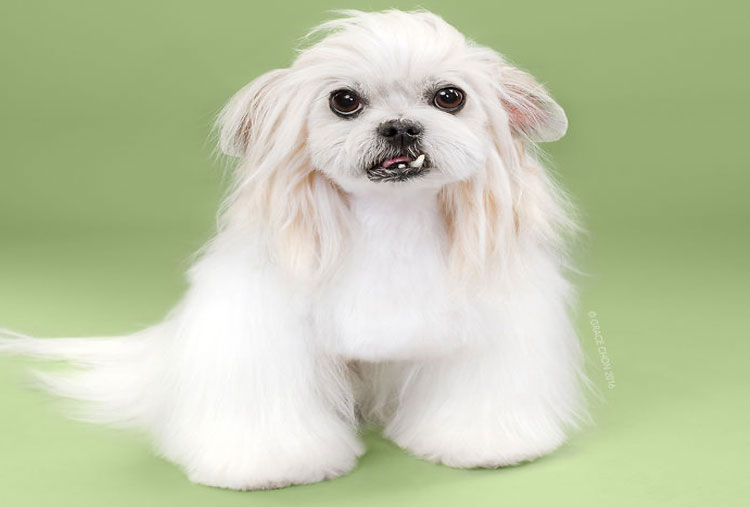 From time to time, we all need to change our look because it can help us become more confident. This might just be a dog, but his owners probably love him very much and they want what is best for him, even though he doesn’t seem too excited about his new look. 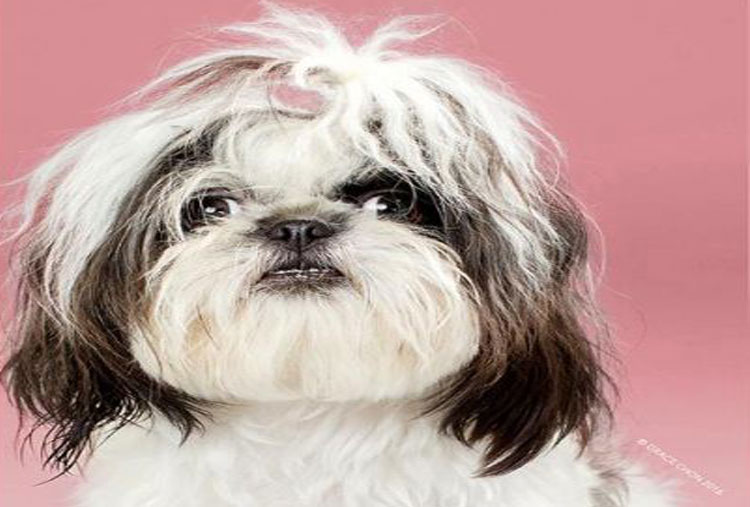 Our little buddy has a messy style going on here. He reminds us of those rock superstars that didn’t care what people thought of them and had some very odd hairstyles. This dog breed is famous for having cute ponytails. 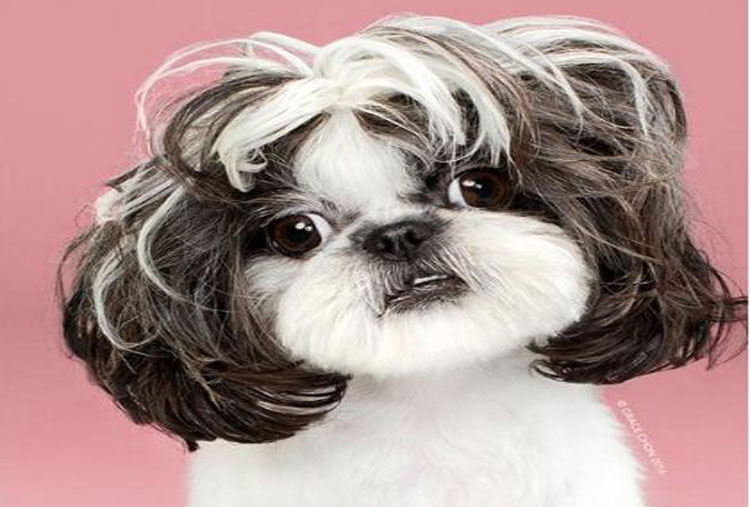 This cute dog might look a bit confused, but he definitely likes his new haircut because it is the right kind of messy. He doesn’t need any hair dye, he looks really confident with all that gray hair! 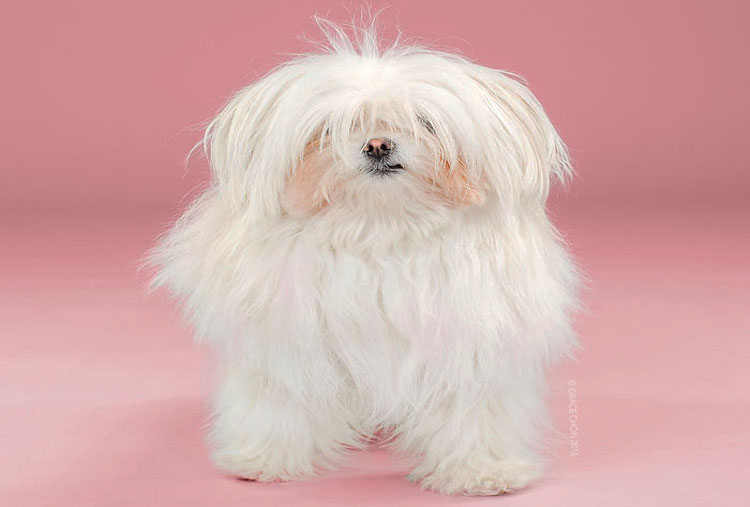 This is the last dog of this photoshoot. Her name is Yuki, and she loves to being stylish all the time, just look at her pink mustache! It is probably pink because she needs a bath but let’s see what she looks like after the grooming! 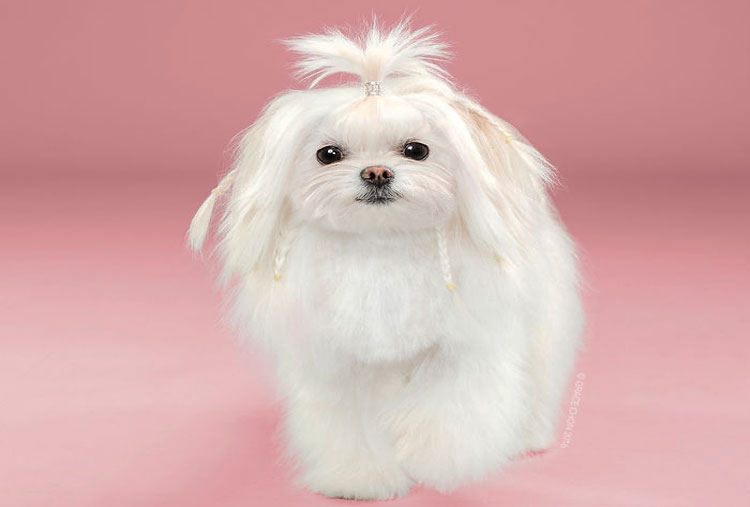 Yuki’s grooming was done by Alyson Ogimachi, and she looks awesome! She looks like she is ready to walk on any catwalk, with that stylish ponytail and those amazing braids. We hope you enjoyed these adorable pictures of these awesome dogs!