Cats are many people’s favorite pets; they are famous for not having the best temper and for being independent. They are one of the few animals that domesticated on their own so they are pretty smart creatures. In Japan, there are many stray cats living in Tokyo’s Shitamachi area.

Photographer Masayuki Oki loves these four-legged buddies, so he decided to capture these bizarre cats. Check out his collection about the many faces of Tokyo’s stray cats. 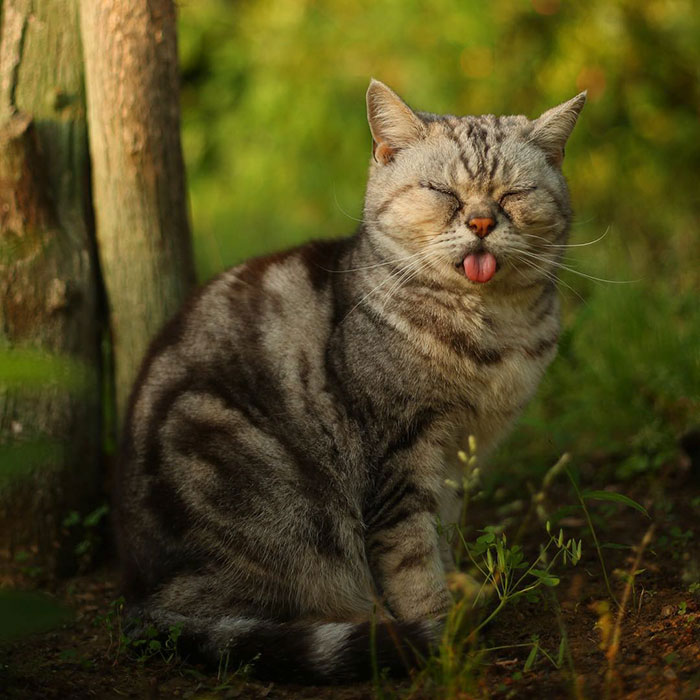 This photo is so adorable and funny; this little cat looks like he is trying a lemon for the first time. He definitely knew how to pose for the picture. In the following pictures, we’ll share with you some interesting facts about cats. Here’s fact number one; just like our fingerprints, a cat’s nose has a unique pattern. 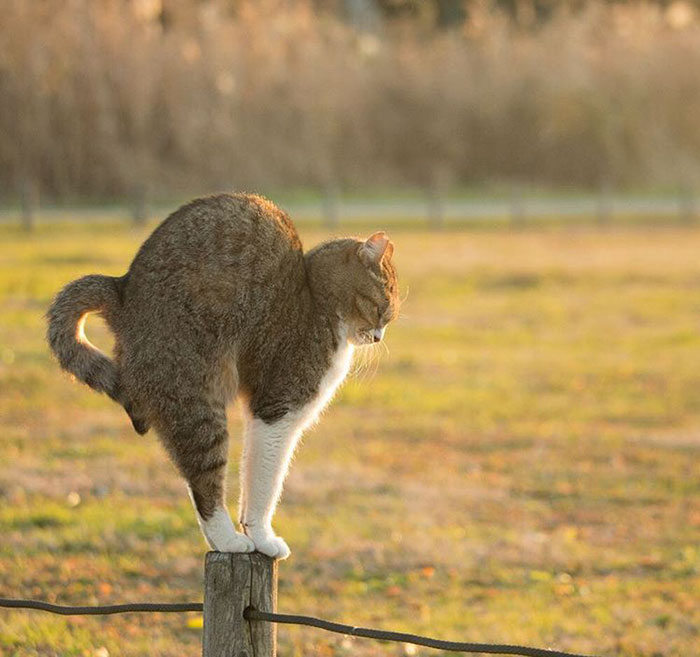 This little buddy looks like he’s ready for his morning jog; he just needs to do some stretching first. If a cat slowly moves his tail from side to side, it means that he likes you, but if he wags his tail, it means he’s upset about something. 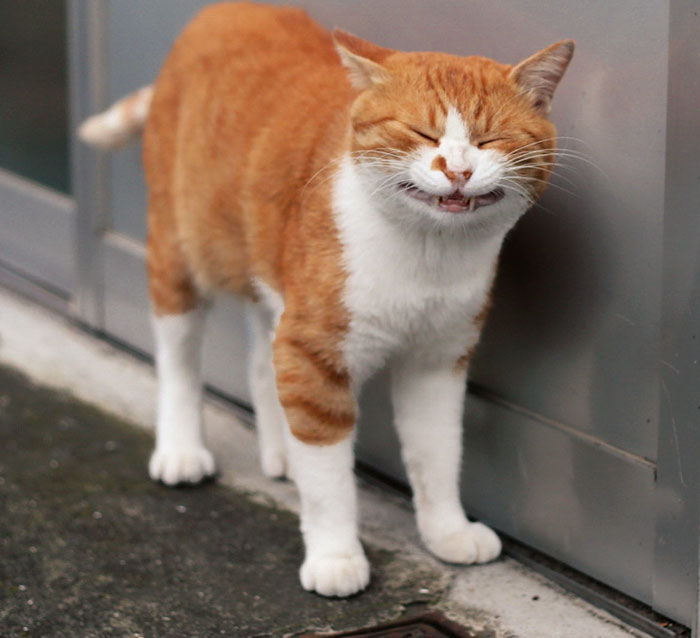 This looks like the Cheshire cat from Alice in Wonderland. He might be trying to look like a friendly cat when he smiles, but he actually looks a bit creepy. Did you know that it is more common for Kittens to meow because they are asking their mothers for attention? And when adult cats meow, they probably want to tell you something important. 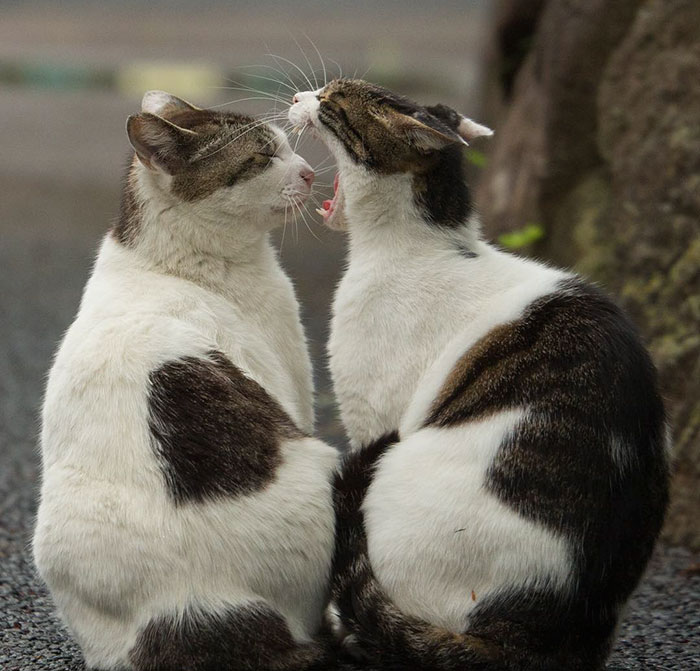 We are not sure if these cats are arguing about something or if the one on the left is asking the other “Do I have fish breath?” either way, this picture is hilarious! Cats’ eyes have a reflective layer of cells below the light receptors; this is why they can see in the dark. 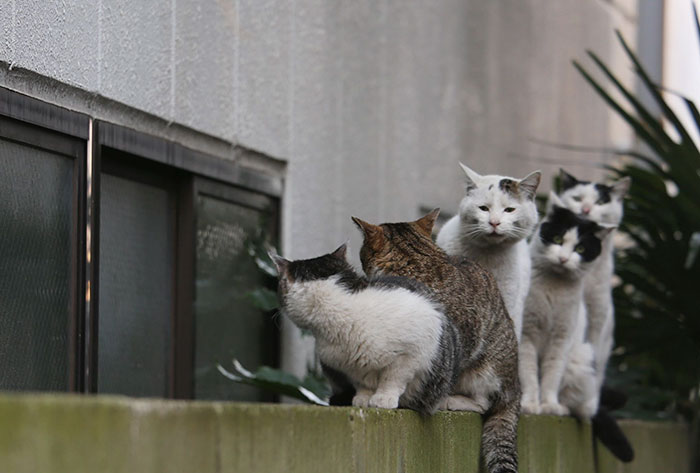 These guys look like they are ready to go on their next adventure. Did you know that cats can’t taste sweet things? This is due to the fact that they lack the amino acids that allow humans to enjoy sweets. Poor kitties, they are really missing out on something! 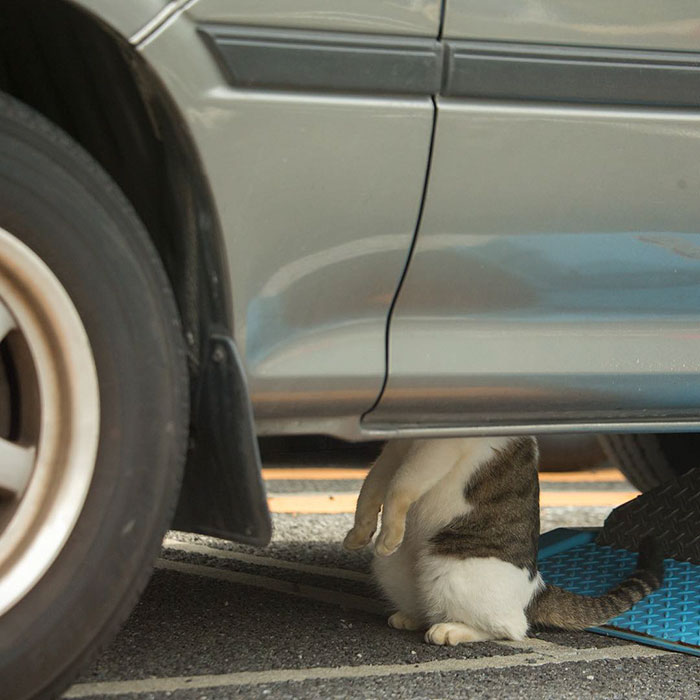 Are you having trouble with your car? No problem! This cat is the best mechanic in all of Tokyo. Cats have more 230 bones in their body and they don’t have clavicles, so they can fit pretty much everywhere.

Garfield… is that you? 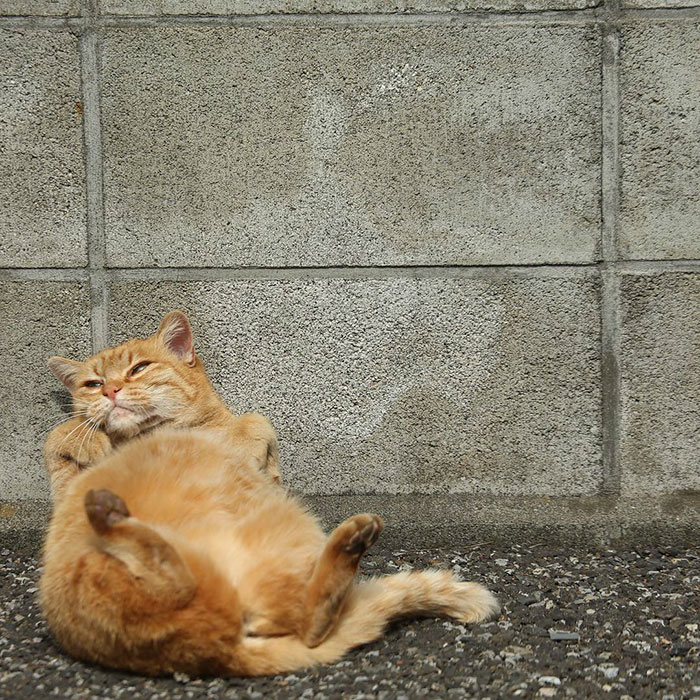 This cat looks like the real life version of Garfield! He looks like he has eaten a bit too much and now he’s feeling guilty about it. Did you know that biologically a cat’s brain is more similar to a human’s brain, compared to a dog’s brain? Cats are just as smart as dogs but in different ways. 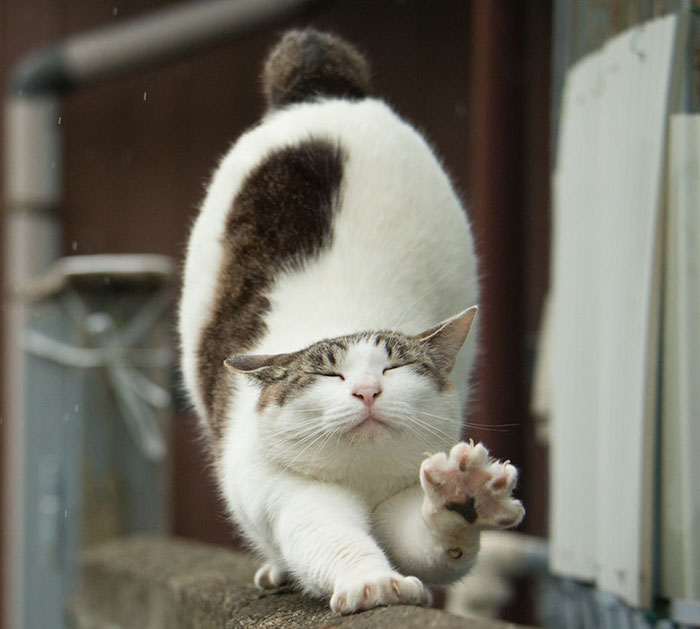 This cat looks like he just woke up from a long nap. Cats sleep over fifteen hours every day! And they are more active between dusk and dawn because they have the physiology of a predator. Lions have a similar sleeping pattern, that’s why they hunt at night. 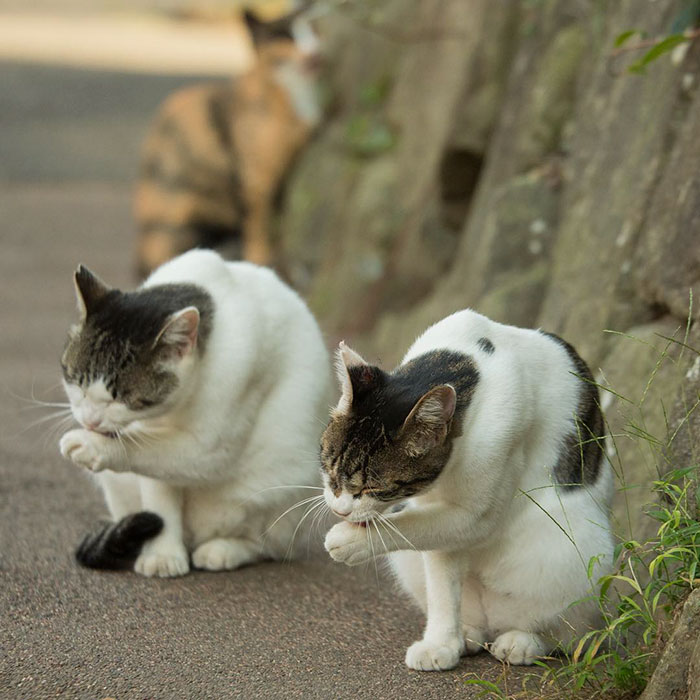 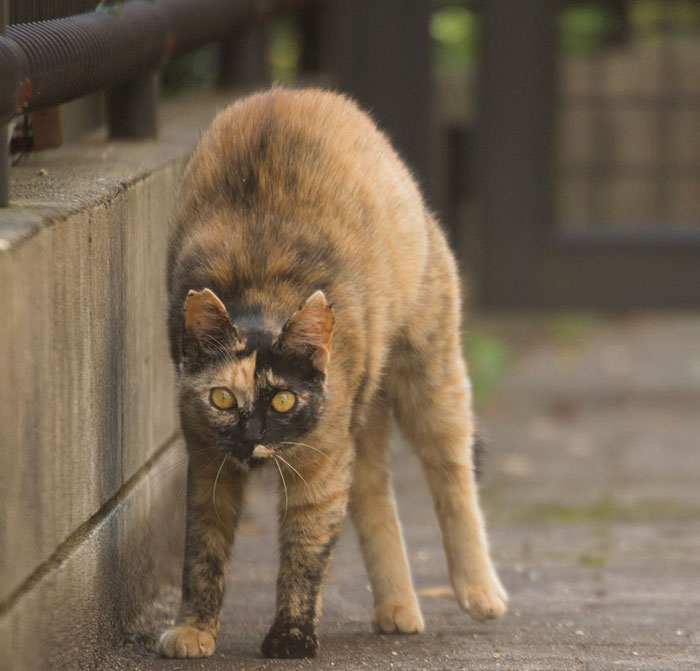 This cat looks like he’s not feeling comfortable with the photographer. Cats can recognize their owner’s voice but they simply decide to ignore them; so now you know why your cat doesn’t pay attention when you call his name. 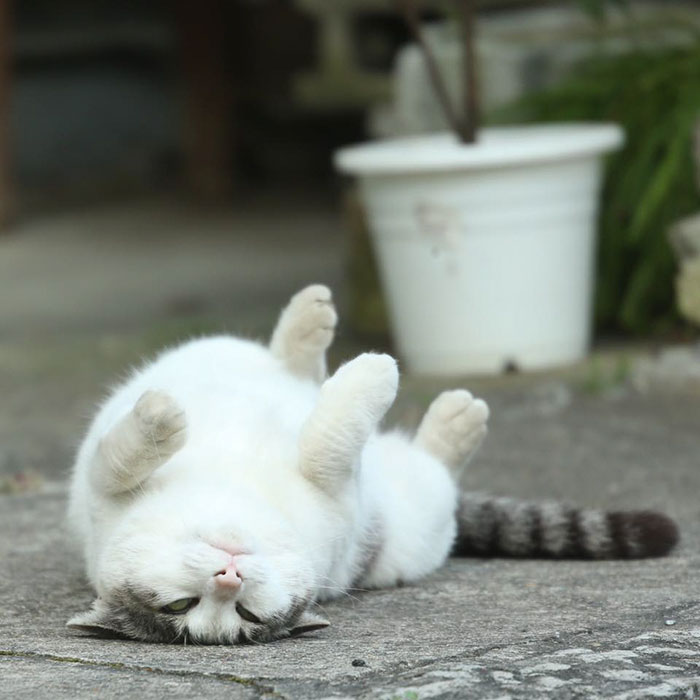 This white cat is so adorable! He’s just lying on the floor waiting for the photographer to play with him for a little while. Cats can’t recognize themselves in the mirror because they can only recognize another living being if they can smell it. 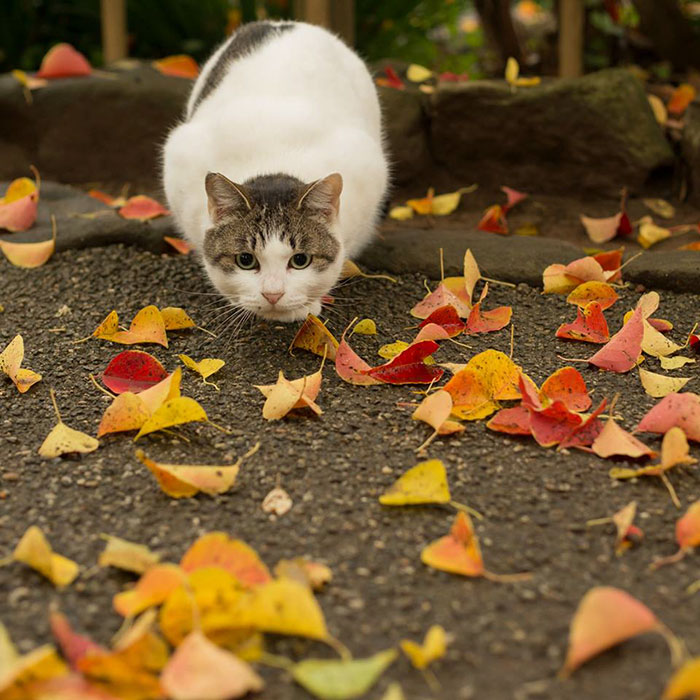 Cats sleep approximately 15 to 18 hours a day; in spite of this, they are always aware of their surroundings; even the slightest noise will wake them up. This cat looks like he’s suspicious about the photographer!

Picking up some flowers 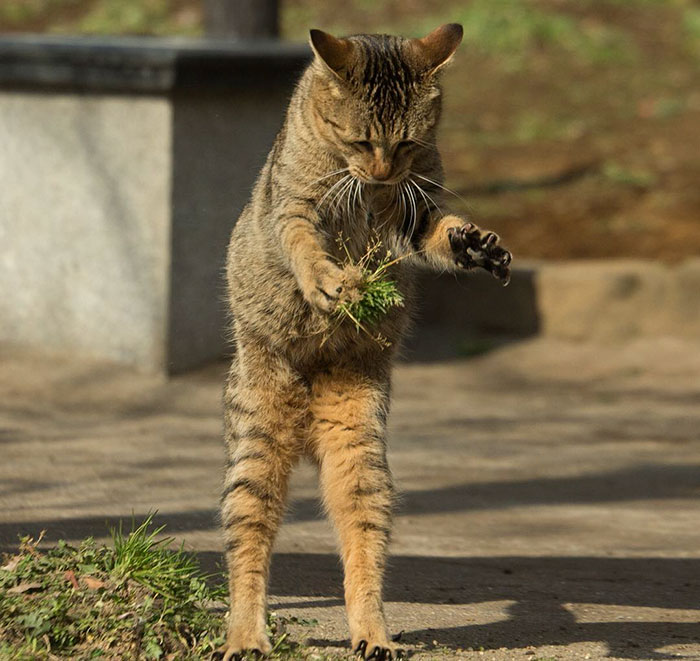 This adorable cat looks like he was about to go on a date and he forgot to buy the girl some flowers so he decided to grab the ones he found on the way. Did you know that cat whiskers are not regular hair? They are touch receptors which help the cat detect and respond to changes in their surroundings 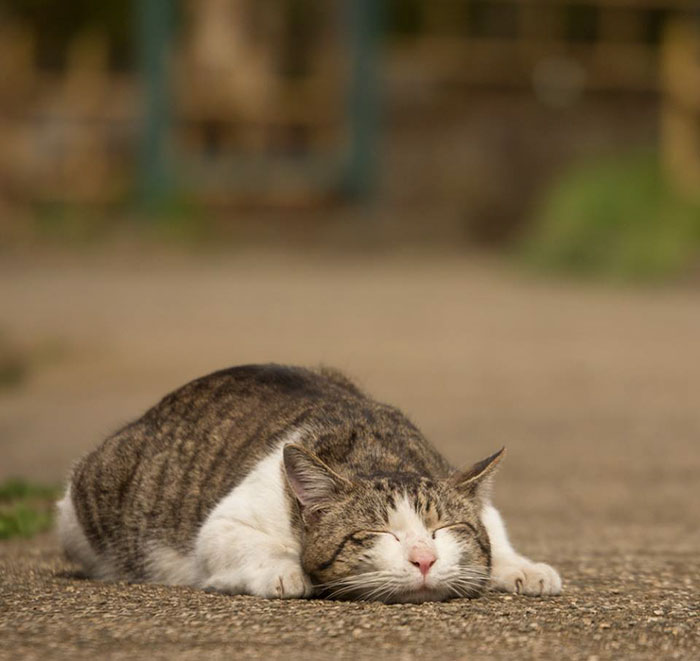 This cat doesn’t mind being homeless, sleeping on the street is just as comfortable as any bed. Cats are able to survive falls from great heights because while they are falling down, they spin themselves around so that their feet are facing the ground. 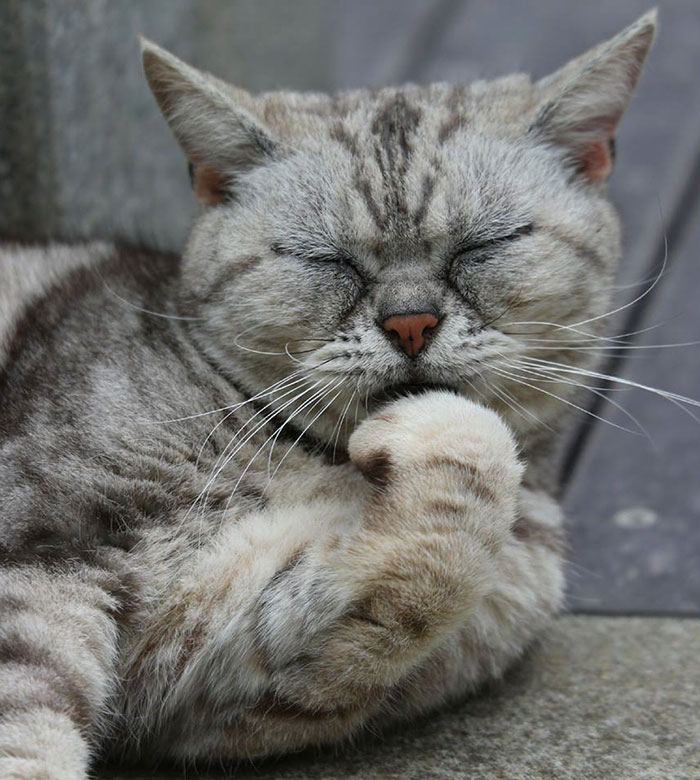 This cat looks like he’s trying to stay interested during the conversation with the photographer. Cats cannot see objects well, that are directly in front of them, or that are right under their nose or chins. Isn’t that interesting? 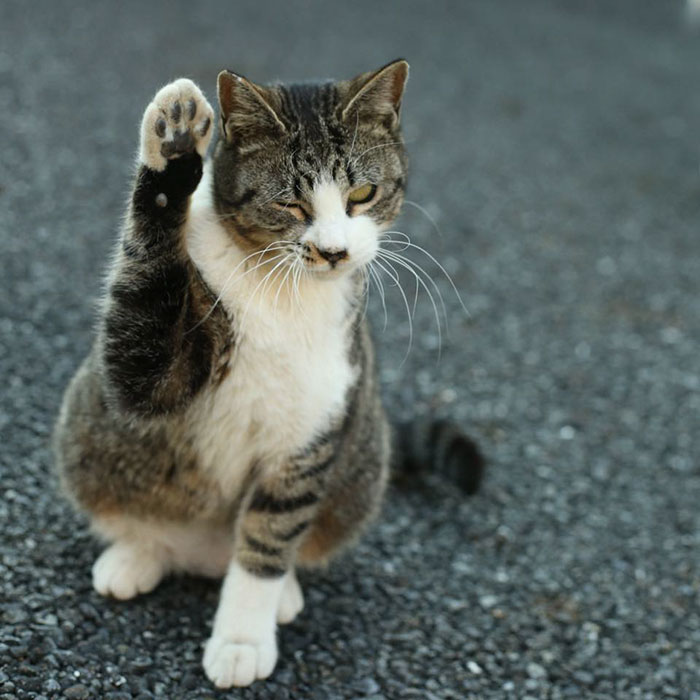 This little guy is raising his paw as if he were saying “Hey I know the answer”. Cats are great hunters; that’s why they can easily catch mice. Experts say that they are better hunters than tigers or lions. 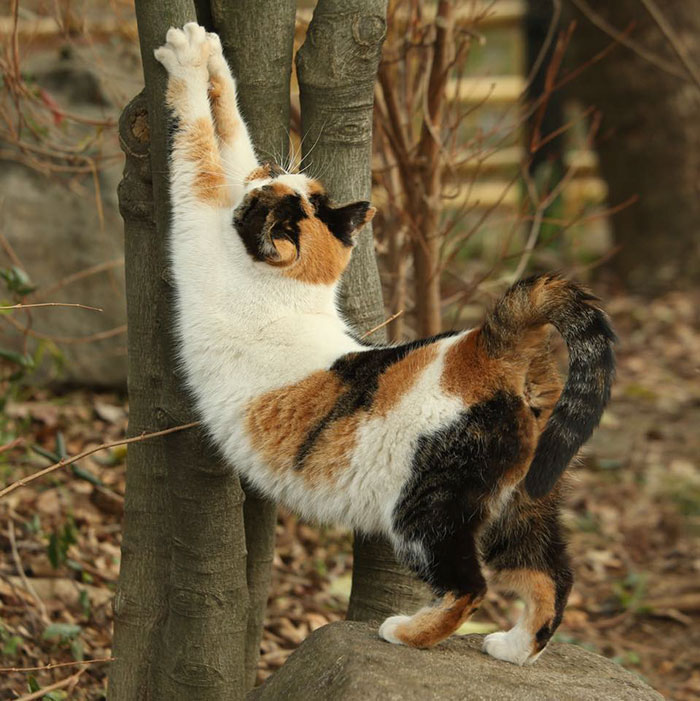 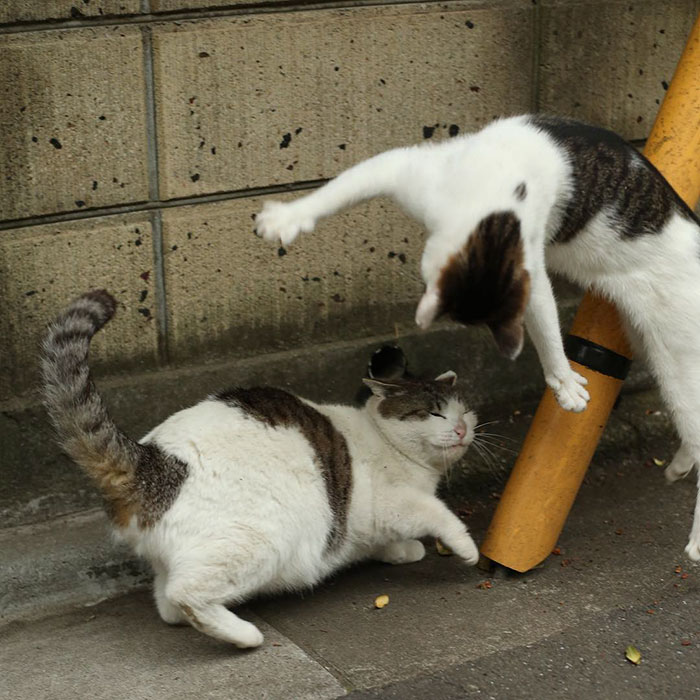 We don’t really know what is going on here, but it looks like these guys are fighting over something. Did you know that most cats purr when they are feeling sick?  It is a way to comfort themselves when they are not feeling okay. 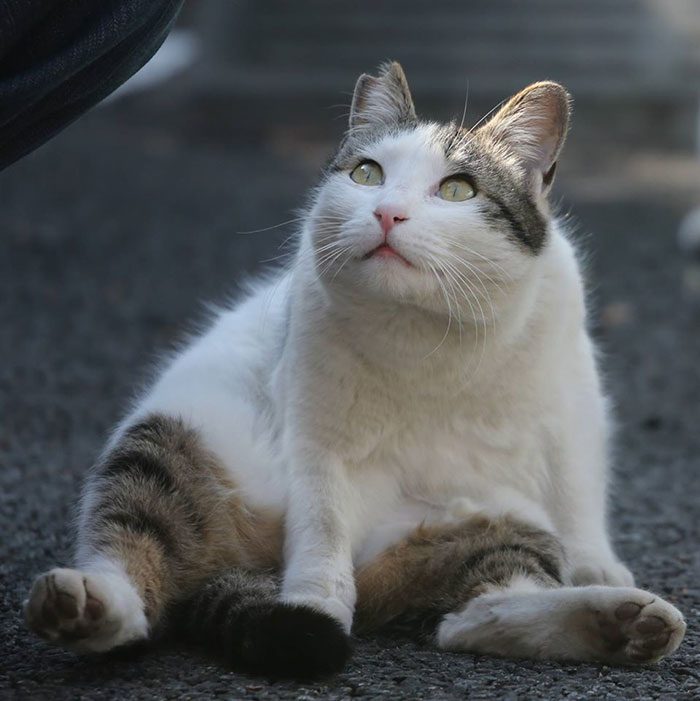 This picture might be our favorite so far! This kitty looks way too adorable. If you own cats, remember not to feed them chocolate or coffee. Coffee and certain properties found in chocolate can be toxic to cats. 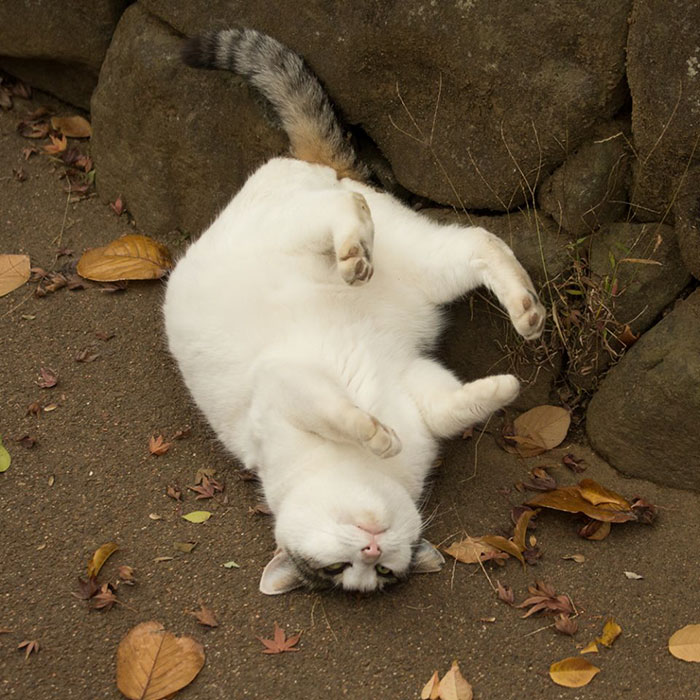 This cat looks like he’s pretending to be dead or injured so that he gets treats and the photographer probably gave him a treat after he took the photo. We hope you enjoyed these pictures of Tokyo’s adorable stray cats.