There are many pleasures in life and without a doubt, traveling is one of them! If you love traveling then you know that it is hard to choose your next holiday destination. There are some really unique places on this earth that make us think of real-life fairytale locations.

In this post, we’ll show you some of the amazing places that need to be on your travel bucket list, most of them are natural wonders that will remind you how incredible our planet is. 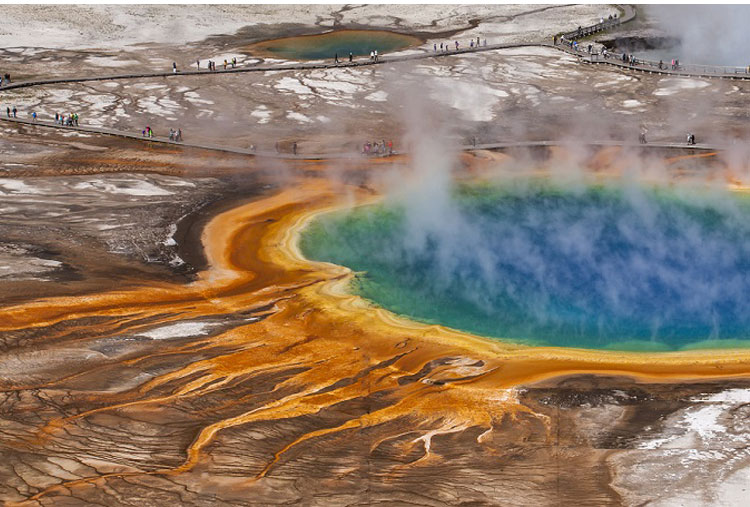 Yellowstone National Park is basically a huge collection of nature wonders with canyons, rock formations, geysers and of course, the picturesque hot springs. The largest and most spectacular hot spring is the “Grand Prismatic”. 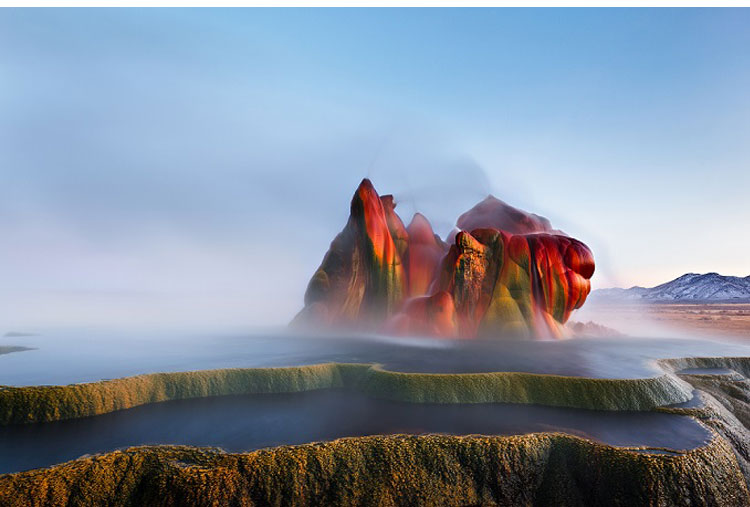 Fly Geyser is located in Nevada; it is a man-made geothermal geyser that looks like a real work of art. The attraction is located on a private land, but if you’d like to visit it, you just need to make arrangements with the owners ahead of time and pay for a fee. 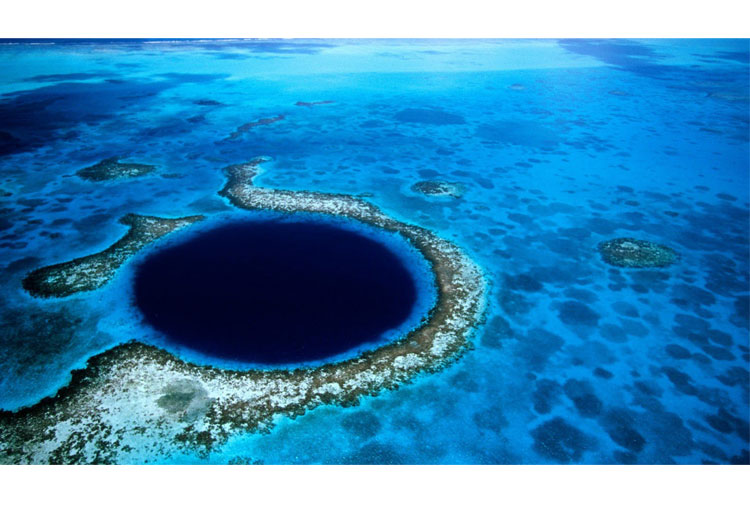 This incredible submarine sinkhole is located off the coast of Belize; it became famous thanks to Jacques Cousteau because he named it one of the top ten scuba diving sites. There are several species of fish in the Great Blue Hole such as the Caribbean reef shark or the Midnight Parrotfish. 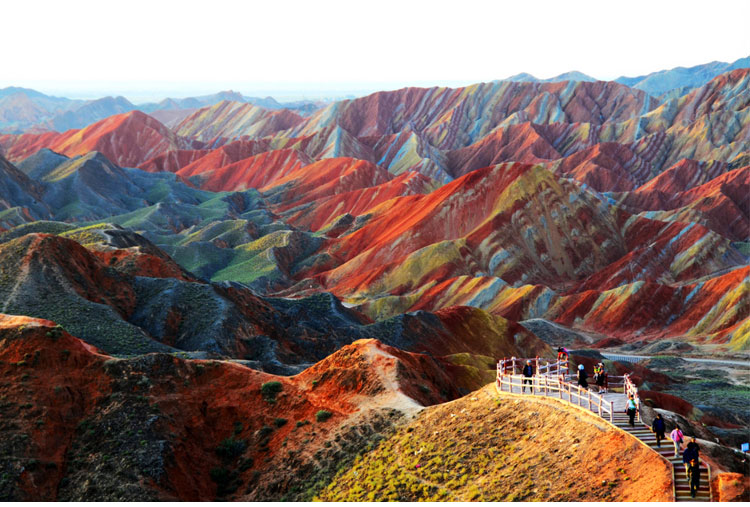 The stunning mountains of Zhangye Danxia are known for their colorful and oddly shaped formations. Southern and northeastern China is full of prominent rock formations, but Zhangye Danxia was voted as one of the most beautiful landforms in China. 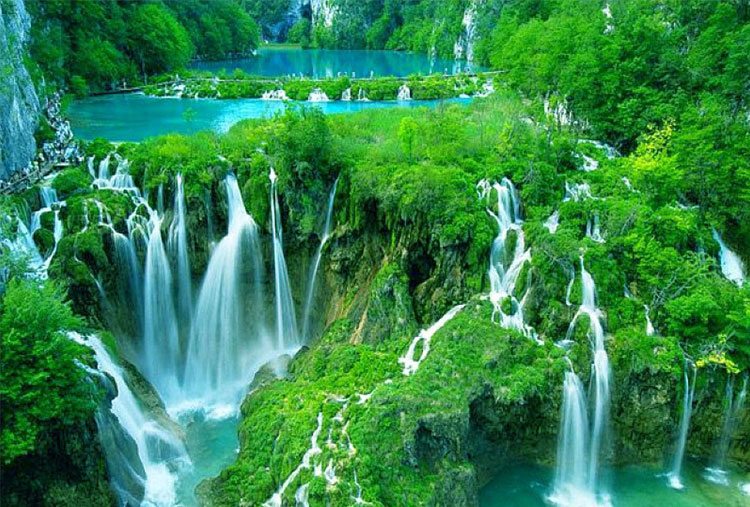 The National Park, in which the Plitvice Lakes are located, is one of the largest ones in Croatia. The most interesting fact about this park is that the lakes are arranged in cascades, it is definitely a natural paradise worth seeing. All lakes can be explored by boat or crossing the wooden walkways that connect the trails inside the park. 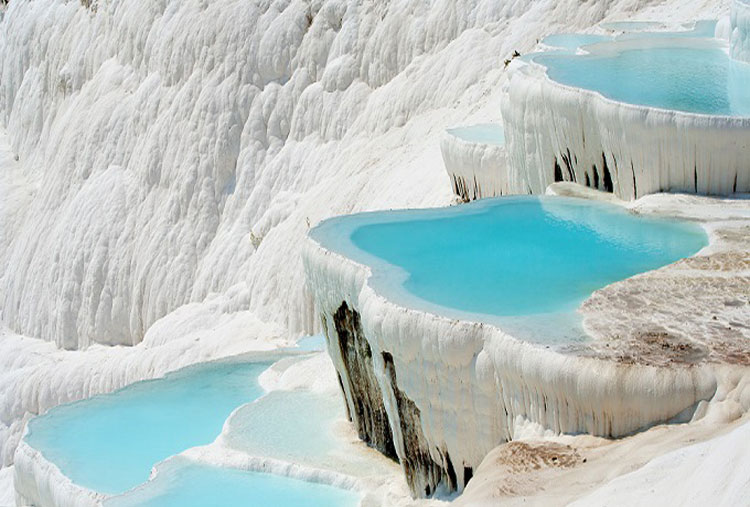 The famous natural terraces of this "Cotton Fortress”, are Turkey’s foremost mineral-bath spa because of its natural beauty. This beautiful place was also declared a World Heritage Site due to the fact that it has been a spa since the Romans built Hierapolis around a sacred warm-water spring. 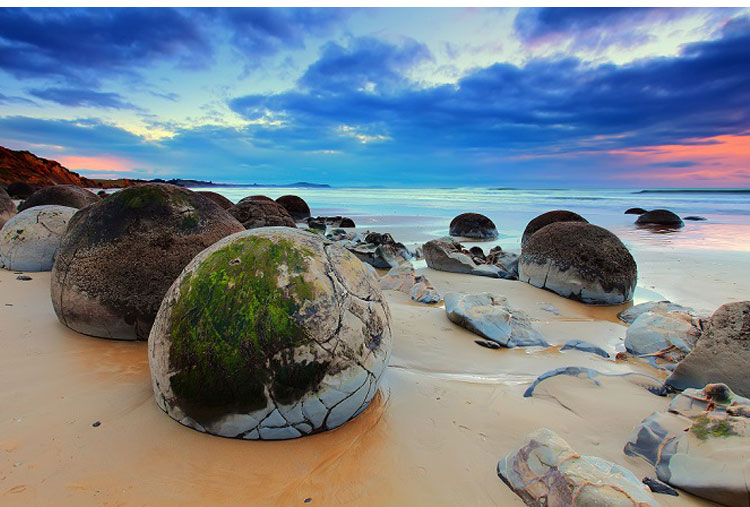 These sphere-shaped formations can be seen in Otago lying along Koekohe Beach, New Zealand. Some of these boulders look like eggs of prehistoric animals; others are hollow inside, but the most interesting fact about these boulders is their unusually large size and spherical shape. 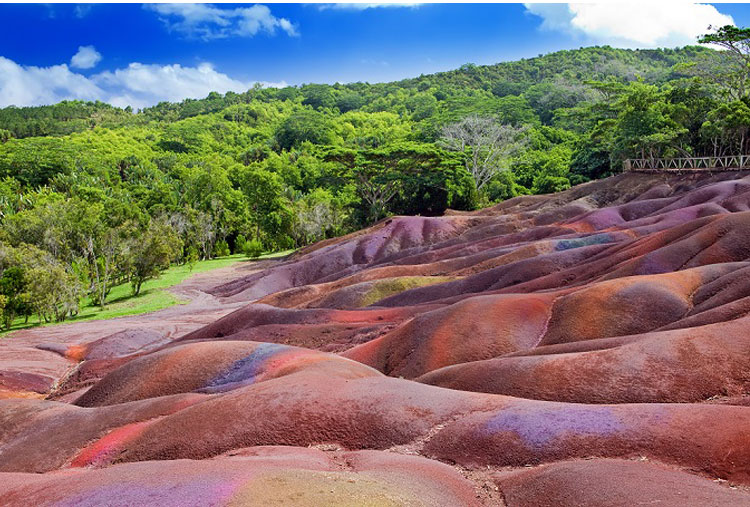 This village located in Mauritius is known for its amazing locations and scenic attractions. One of them is the Colored Earths, a phenomenon in which the cooling of molten rock resulted in color variations. This is an amazing landmark full of lava formations that are 3.5 to 7 million years old.

Moraine Lake and the Valley of the Ten Peaks 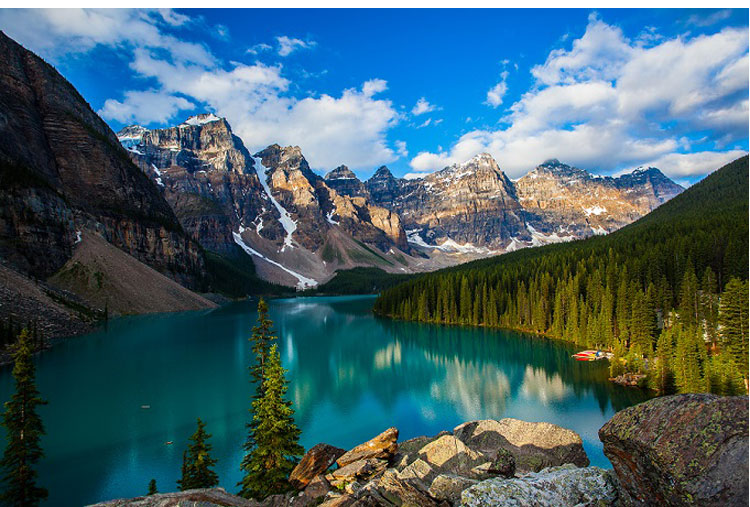 Moraine Lake is located in Banff National Park in Alberta, Canada. This beautiful lake is surrounded by no less than ten mountains with a height of 3,000 meters, which form the Valley of the Ten Peaks. 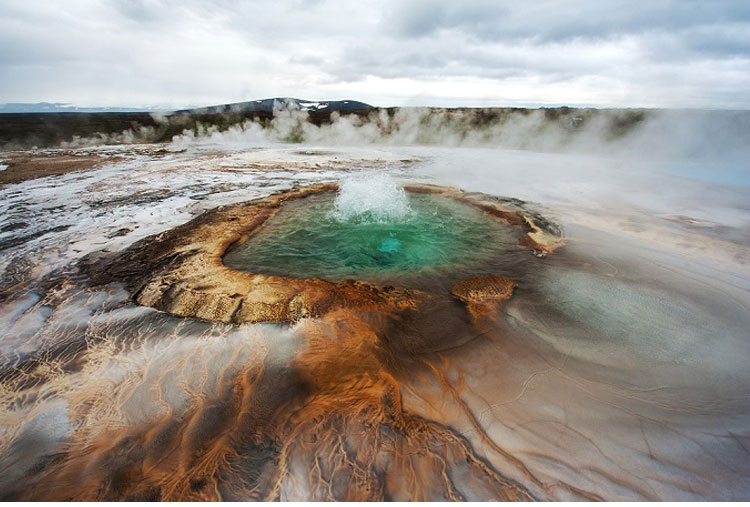 Hveravellir is a thermal area in the heart of Iceland where you can find beautiful hot springs with smoking fumaroles. If you’d like to visit this place, there are 2 houses for accommodation and a small restaurant. You can also visit Kjalhraun which is an enormous lava field located close to Hveravellir. 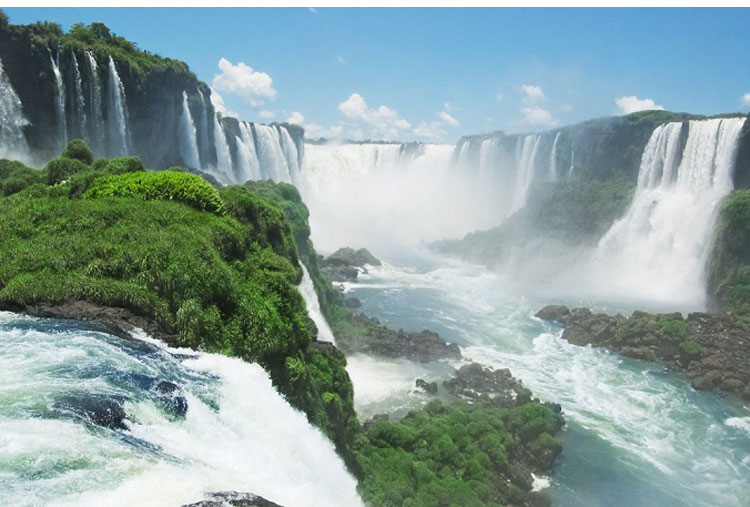 They are a set of waterfalls of the Iguazu River that are located on the border between Argentina and Brazil. Iguazu Falls can be reached from Puerto Iguazu in Argentina, Foz do Iguaçu in Brazil, and from Ciudad del Este, Paraguay.  They were chosen as one of the "Seven Natural Wonders of the World”. 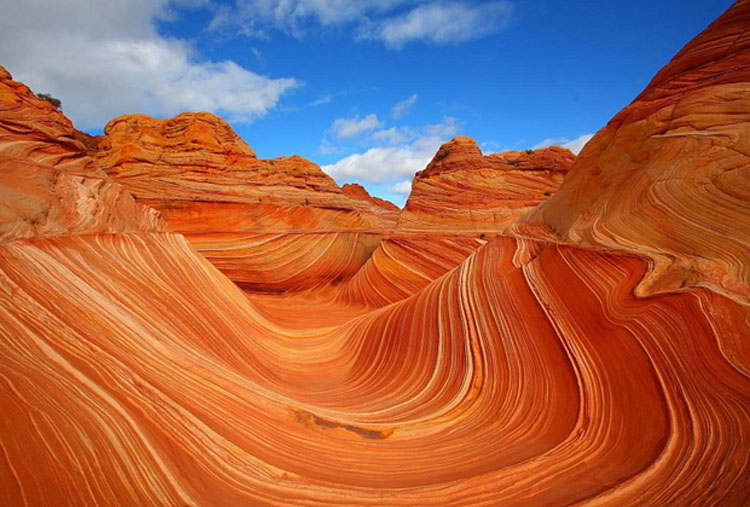 The wave is a sandstone rock formation located near the border of Arizona and Utah. According to dremlandtours.net, “The undulating strata and spectrum of colors found in the sandstone walls of the Wave date back to the Great Pangean Desert of the Jurassic Period about 160-180 million years ago. Wind and water erosion carves, smooths, and reveals the layers of sand left here in great dunes and then compacted and mineralized (colors) into stone.” 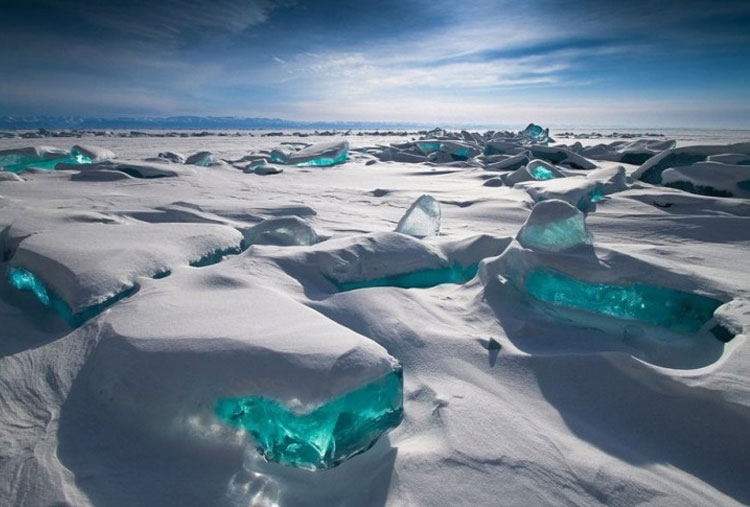 Lake Baikal, located in Russia, is known for being the world’s deepest lake. During winter the lake freezes, but the water is so clear you can see up to 40 meters below the ice. If you’d like to visit this amazing place, you need to be willing to bare the brutal cold, but it will definitely be worth it. 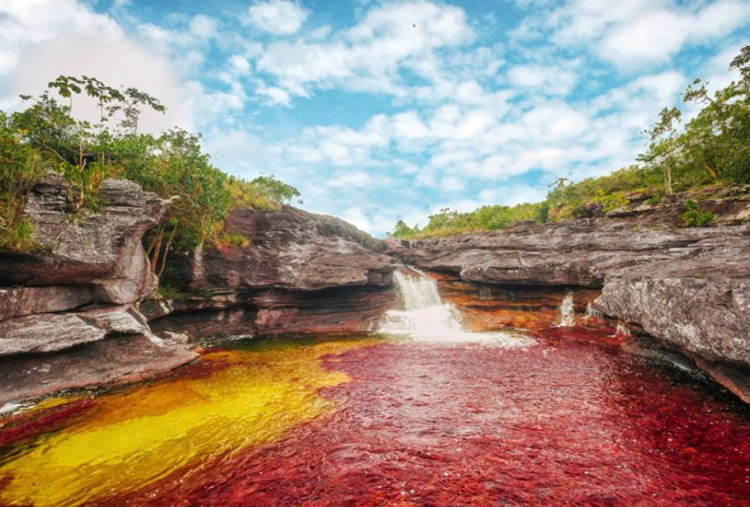 Caño Cristales is one of Colombia’s most amazing natural wonders. The Liquid Rainbow is caused by a unique phenomenon: a red plant – Macarenia clavigera – growing in the riverbed. The river becomes colorful from July to November, so this is the best time for you to visit Caño Cristales. 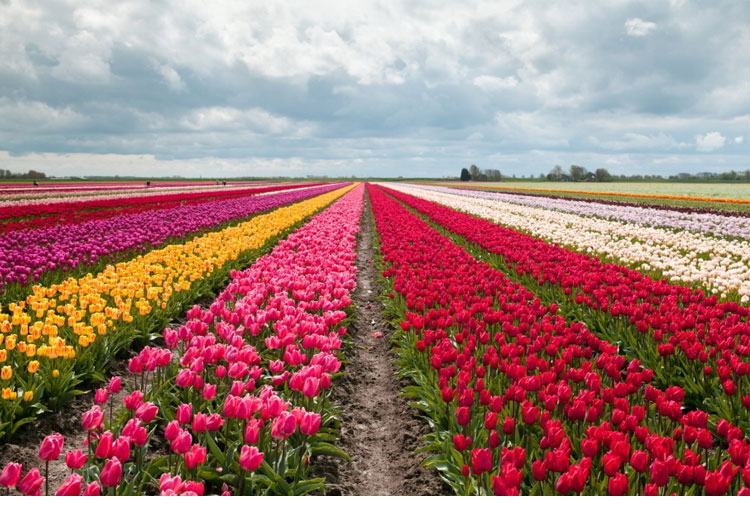 This is one of the most popular attractions in the Netherlands, every spring tourists can see millions of flowers blossom. It is located between Haarlem and Leiden and it is home to the famous Dutch tulip fields. 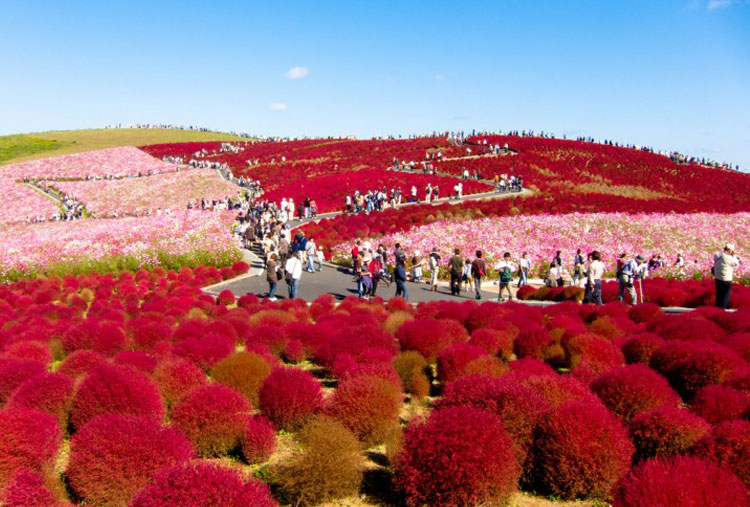 This park is known for the amount of plants that bloom according to the season which makes it a popular tourist destination for Japanese and foreigners. With an area of about 190 hectares, the park features daffodils, 170 types of tulips, cycling trails and even an amusement park with a Ferris wheel. 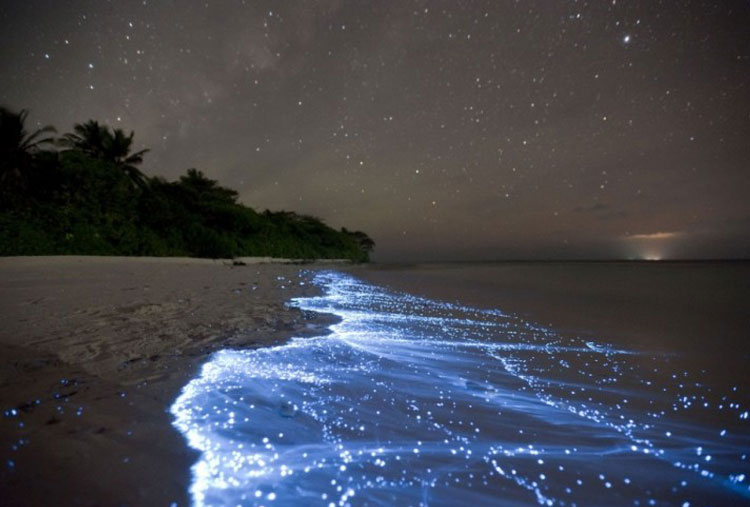 This phenomenon seen in the Maldives looks like a thousand fluorescent lights. These light are bioluminescence created by marine microbes belonging to the order of the phytoplanktons, more specifically the dinoflagellates. If you’d like to see this phenomenon you can visit the Vadhoo Island or any other beach in the Maldives. 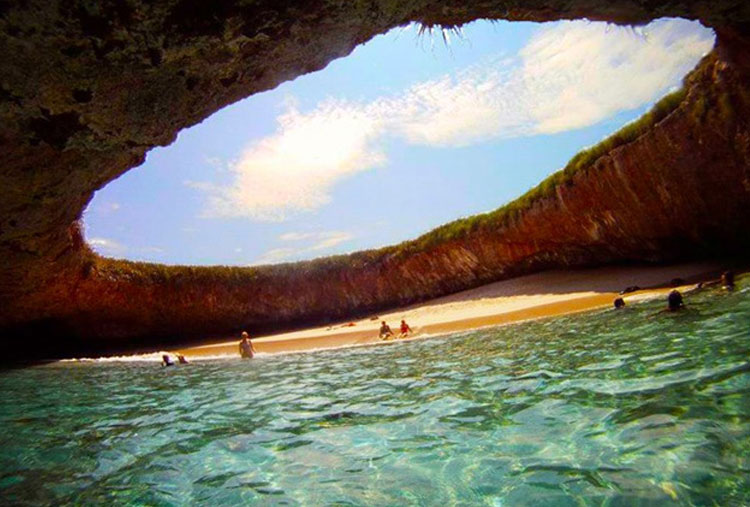 The Marieta Islands in Mexico are a result of volcanic activity. Hidden Beach is one of the most popular locations because the hole revealing the beach was a result of deliberate bombings by the Mexican government. It is considered a magical place visited by many locals and tourists, it is truly a breathtaking place. 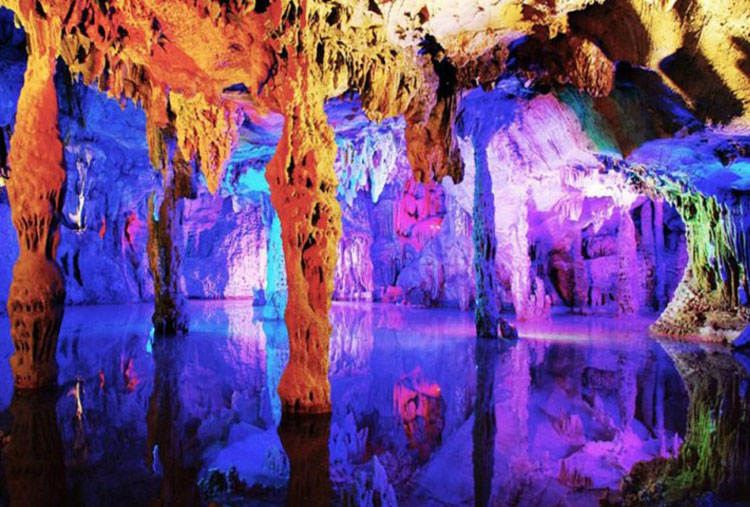 This natural limestone cave has been a tourist attraction in Guilin, China for over 1200 years. Reed Flute Cave is over 280 million years old; it is illuminated by different colored lights, creating a surreal environment. 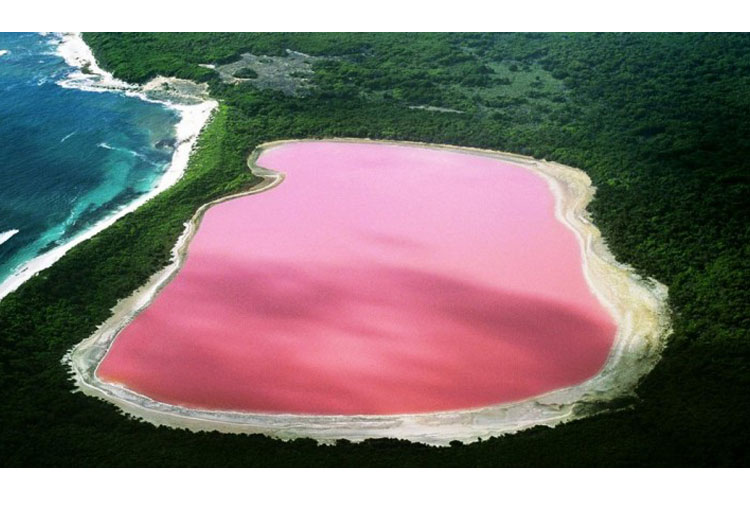 This beautiful pink lake is located in the Recherche Archipelago off the south coast of Western Australia; scientists say the pink color is due to the presence of the organism called Dunaliella salina. This lake can be reached by helicopter or by cruises.