This Sleeping Baby Is Dressed In The Most Adorable Costumes

All the parents out there know that getting a baby to sleep is one of the most rewarding and challenging experiences. You need to be really patient and perseverant because even the slightest of noises will wake the baby up. Laura Izumikawa Choi somehow manages to dress her daughter Joey Marie in the most creative costumes while she is asleep.

Laura shares all the adorable pictures on her Instagram account @lauraiz. We’ll also share with you some very useful tips by Sabrina James from parenting.com that will help your baby fall asleep. 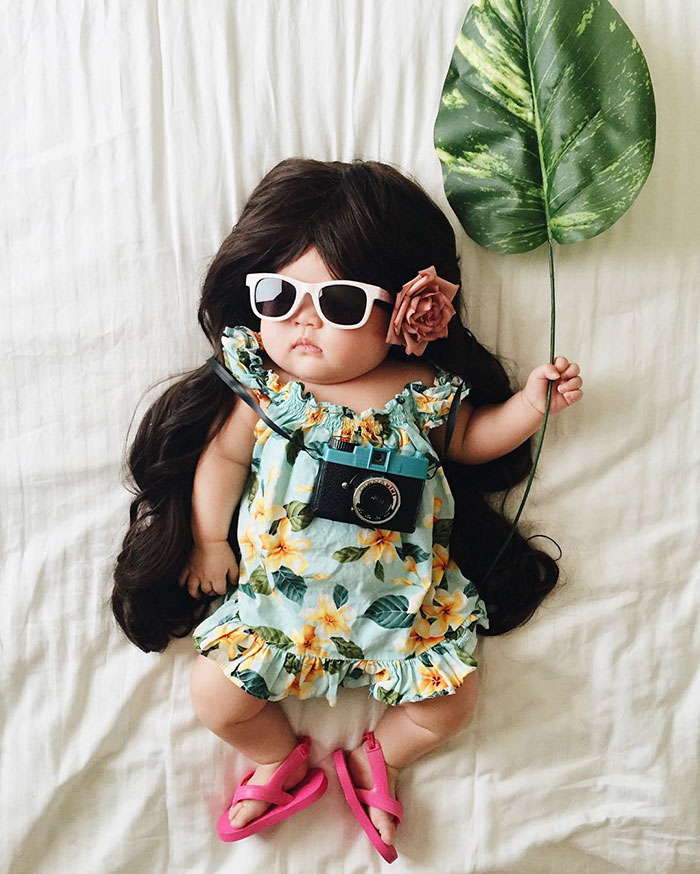 One of the best tips is bathing your baby before sleeping. Warm water, combined with soft and loving strokes with a washcloth can relax just about anyone. Forget the squirt toys, and keep voices and activity low to make bath time a soothing experience for your little one. 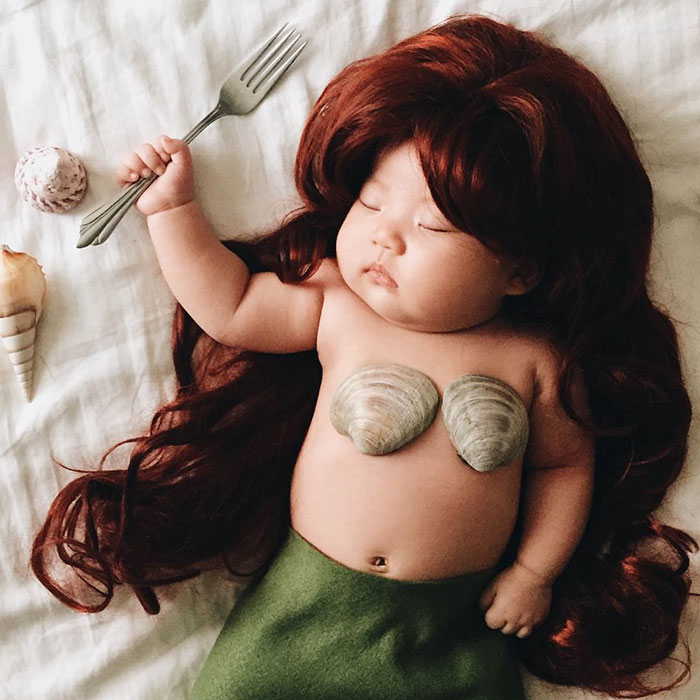 Whether you're for or against co-sleeping, studies show that children who co-sleep with their parents grow up with higher self-esteem and less anxiety. To co-sleep safely, place a co-sleeper or bassinet next to your bed. 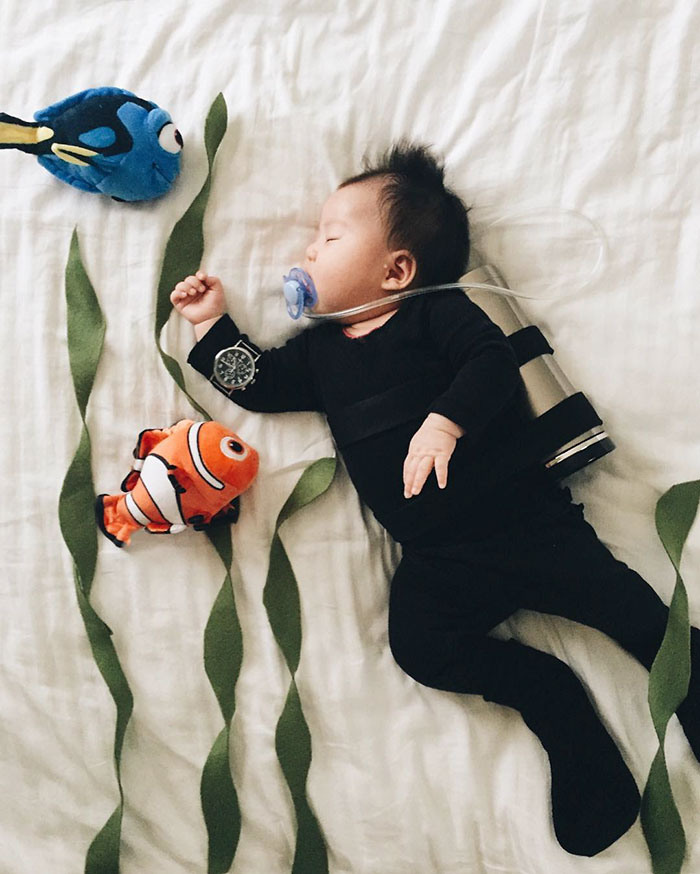 If your baby is the type that wakes at night hungry, a dreamfeed might help. Coined by Robert Bucknam, M.D., in On Becoming Babywise, the term dreamfeed refers to a parent-directed, late-evening feeding. Instead of waiting for her to wake up hungry, feed your baby before you go to bed, while she is asleep. Some believe the extra feeding fills her belly just enough to earn a bit more uninterrupted sleep.

The Adorable Statue of Liberty 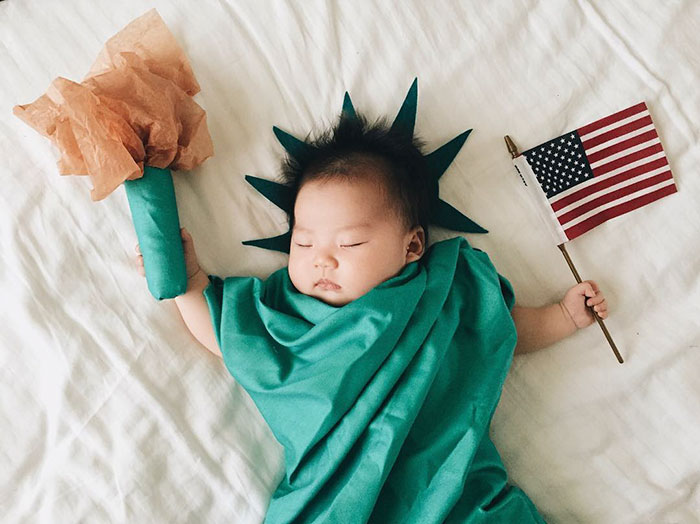 Keep the sleep surface of the crib free of everything but the cutest thing in the room, your baby. Blankets, bumpers, and stuffed animals can be hazardous, increasing the odds of suffocation or choking. A fitted sheet is all he needs on his mattress. 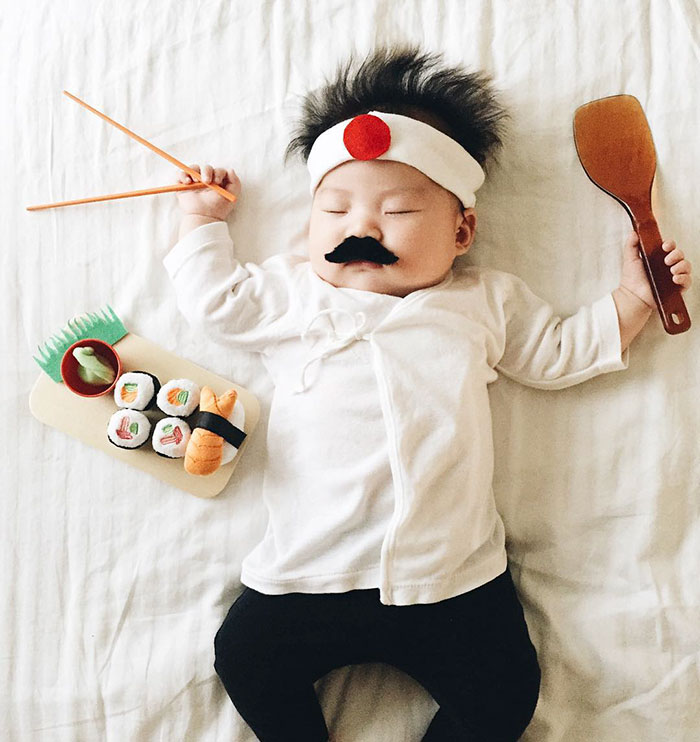 Some little noses can be lulled to sleep with the scent from a drop or two of natural lavender oil on a tissue near the bed. Although lavender and other essential oils are known for their relaxation and anti-anxiety benefits, fragrances are not recommended for children less than 6 months old.

Apple’s Employee of the Month 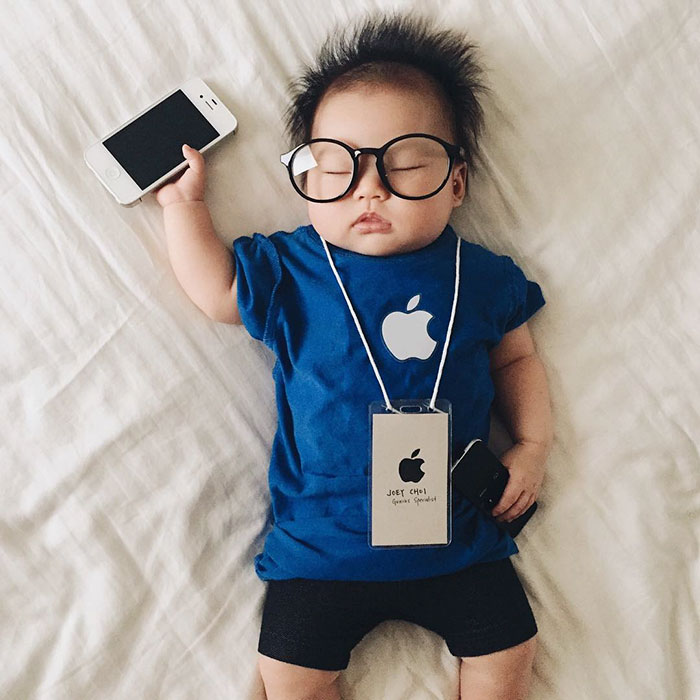 Gastroesophageal reflux disease (GERD) is a commonly undiagnosed medical reason why some babies have problems sleeping. Caused by a malfunction in the muscle where the esophagus meets the stomach, GERD results in acids being drawn up into your baby's esophagus, causing pain. 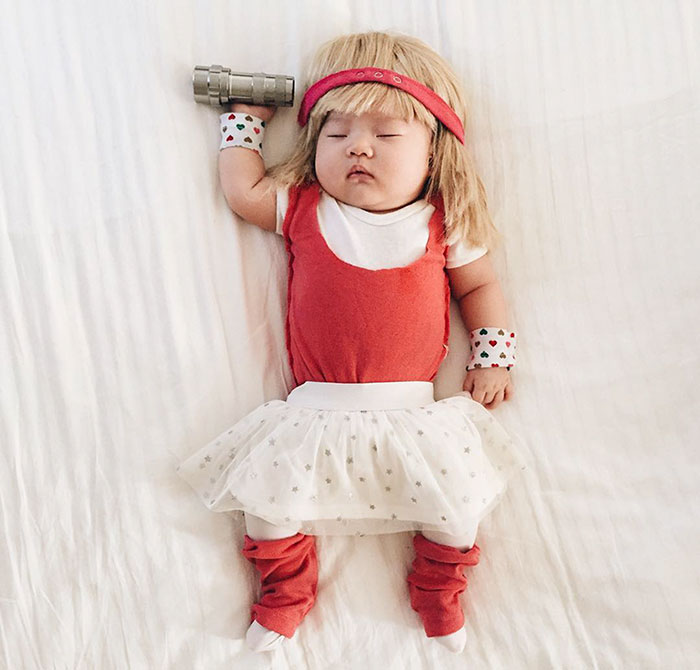 When you transfer your baby into the crib at bedtime, try putting your hand gently on her stomach, arms and head to comfort and soothe her. Something as simple as having you close can do wonders for your little one's security at night. 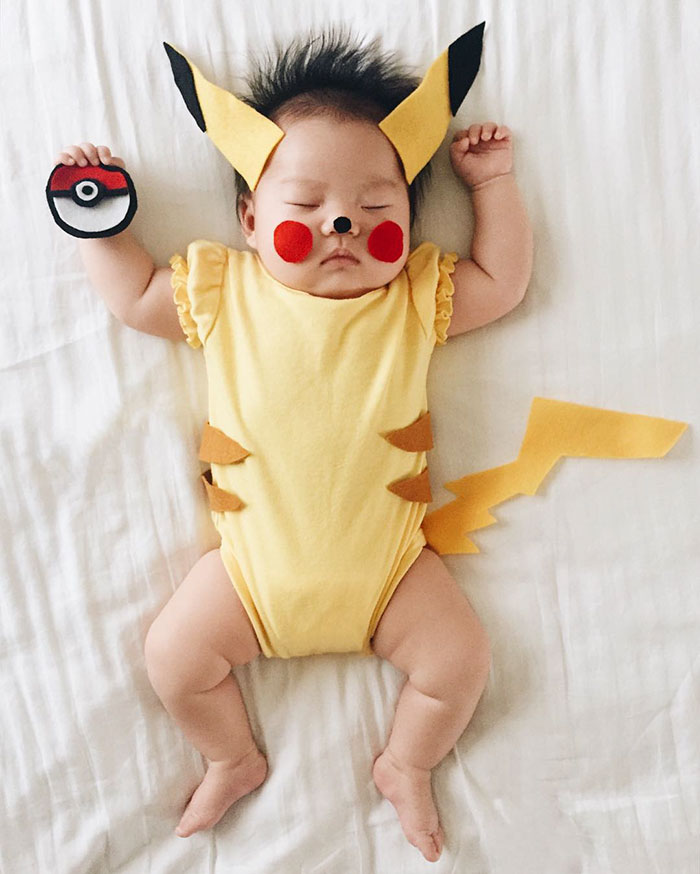 An overtired baby is often impossible to get to sleep. Setting an established bedtime is important, and many experts believe that between 6:30 and 7 p.m. is an appropriate bedtime for most babies under one year old. 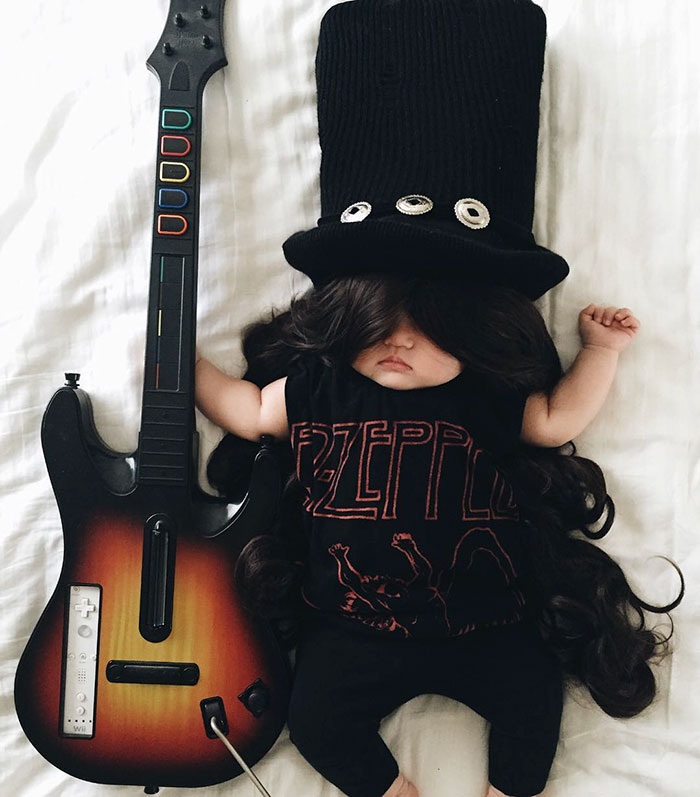 Sleepy sweeties in their pajamas really couldn't be more adorable. But sometimes babies develop sensitivity to synthetic fabrics, which can hinder sleep. Try natural fibers, like cotton, to avoid irritation.

The cutest wizard of all time 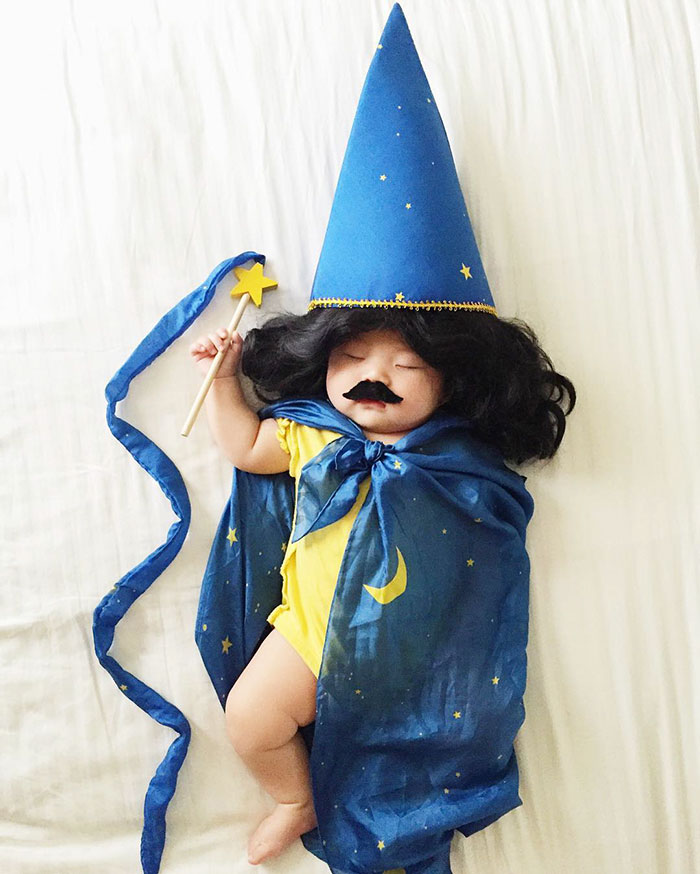 You know how you always sleep better when the temperature is just right? Well, your little one is no different. The American Academy of Pediatrics recommends keeping the temperature in your baby's room between 65 and 70 degrees Fahrenheit to prevent SIDS. 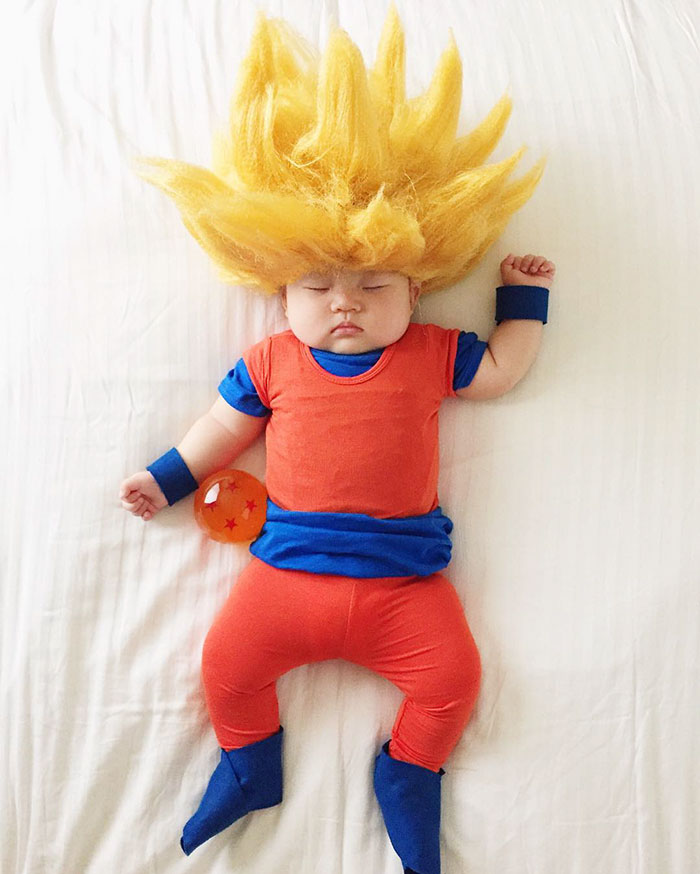 To help your little night owl understand when it's bedtime, keep her room dark. Forgo nightlights and use dark curtains or blackout shades to simulate nighttime during the day. When it's time for her to wake up, whether in the morning or after a nap, open the curtains and let light in to help her to understand the difference. 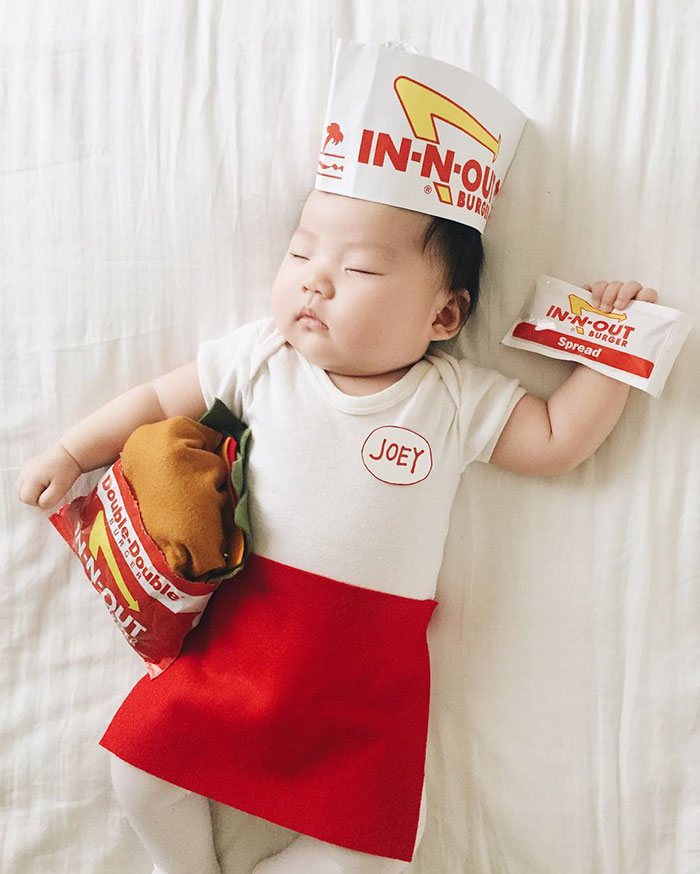 Babies and toddlers who enjoy a 15-minute bedtime massage fall asleep faster than those who are only read a story, according to studies conducted at the University of Miami Touch Research Institute. So break out the baby-safe oil and rub him down using soft strokes and moderate pressure. 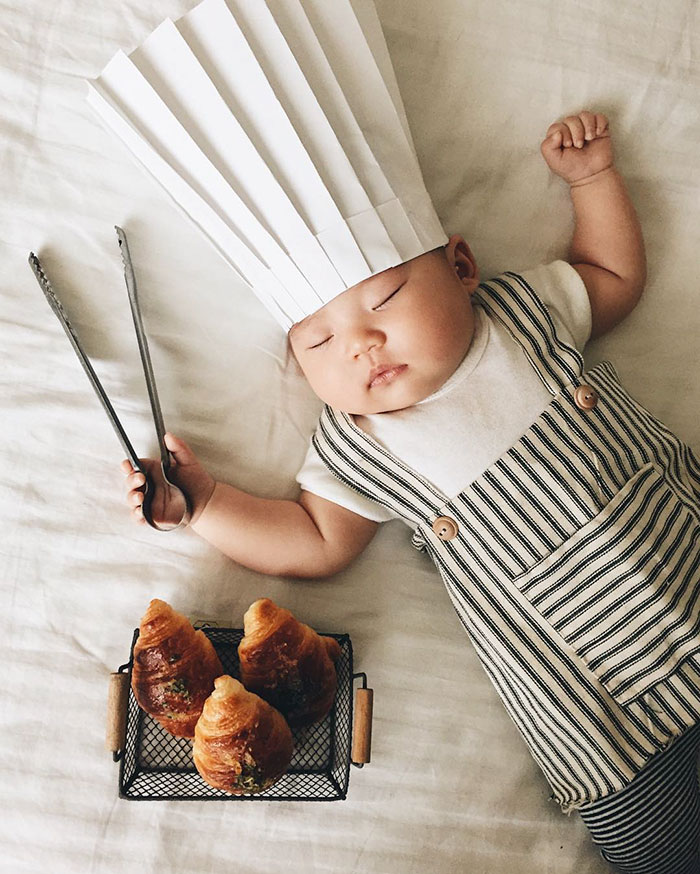 Aside from the obvious benefits of napping, naps are also important to your baby's mental and physical growth. Don't omit naps in hopes that your baby will sleep longer at night, as the opposite is usually true. 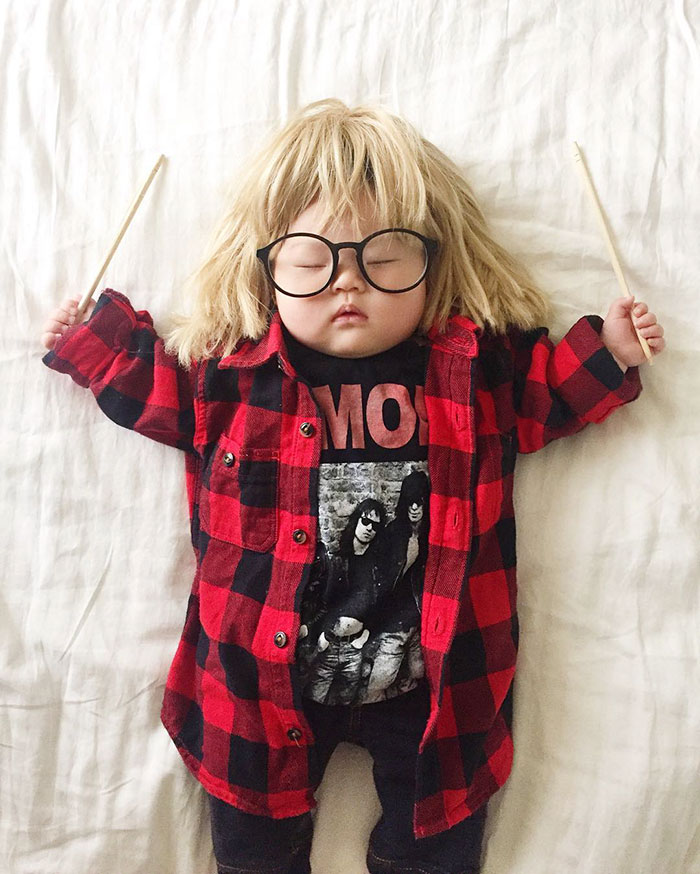 Wet diapers at night can be bothersome. If she sleeps through a wet diaper (bowel movements should be changed immediately), and you're not treating a diaper rash, don't wake her. Super-absorbent overnight diapers, along with an application of diaper cream for skin protection, if needed, will keep her comfortable and, one hopes, asleep. 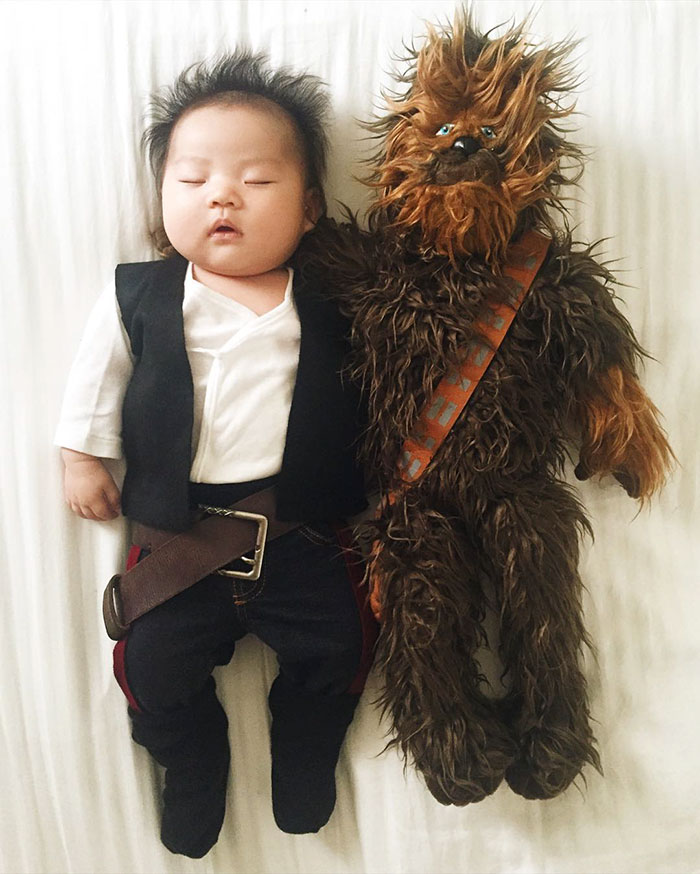 A binky at bedtime can help your little one soothe himself to sleep, and studies show that it may also protect against SIDS. Mom trick: When your baby is sound asleep, remove the pacifier from his mouth so he doesn't wake up if it falls out. Make sure the pacifier you use is soft like the Soothie (soothie-pacifier.com), so it doesn't hurt if he rolls onto it. 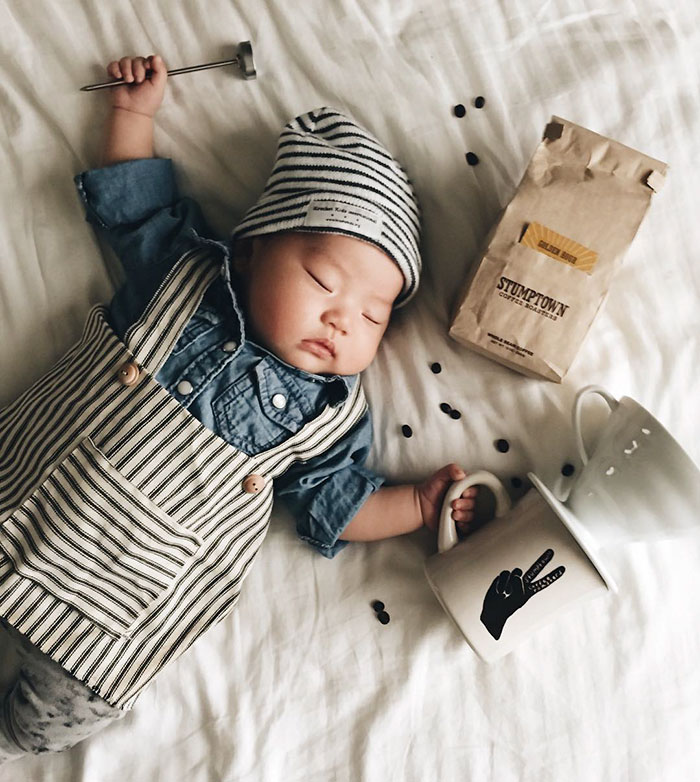 You never know what might work—and what you might be willing to try in the middle of the night. We've heard stories of baby swaying in an infant swing all night, daddy driving slowly around the block (over and over again) and mom sitting on the clothes dryer cradling her little one. 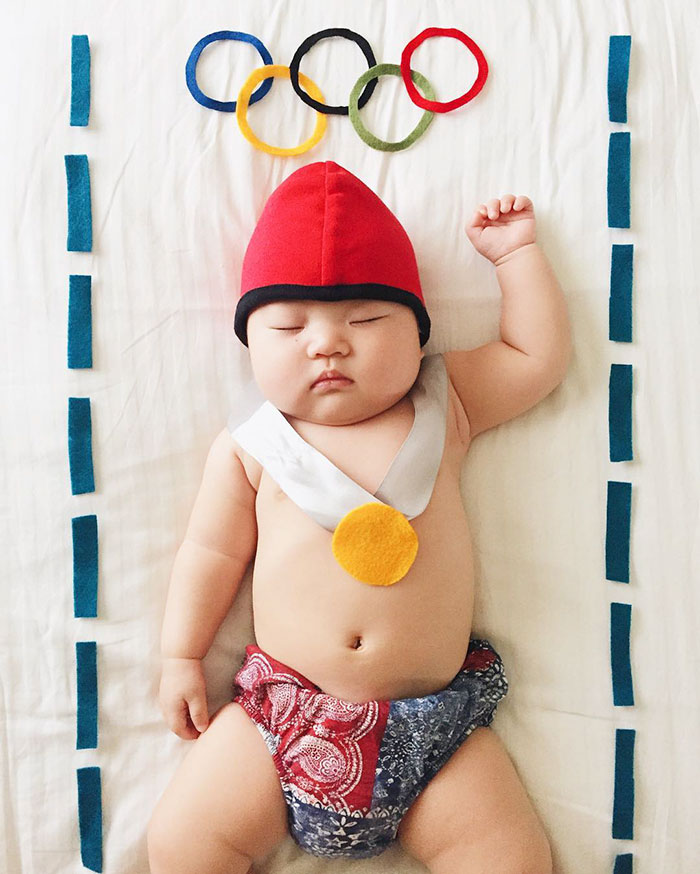 It's no secret that consistent nighttime routines can help your baby understand that it's time to sleep. Choose a soothing ritual and stick with it. Consistency is key. 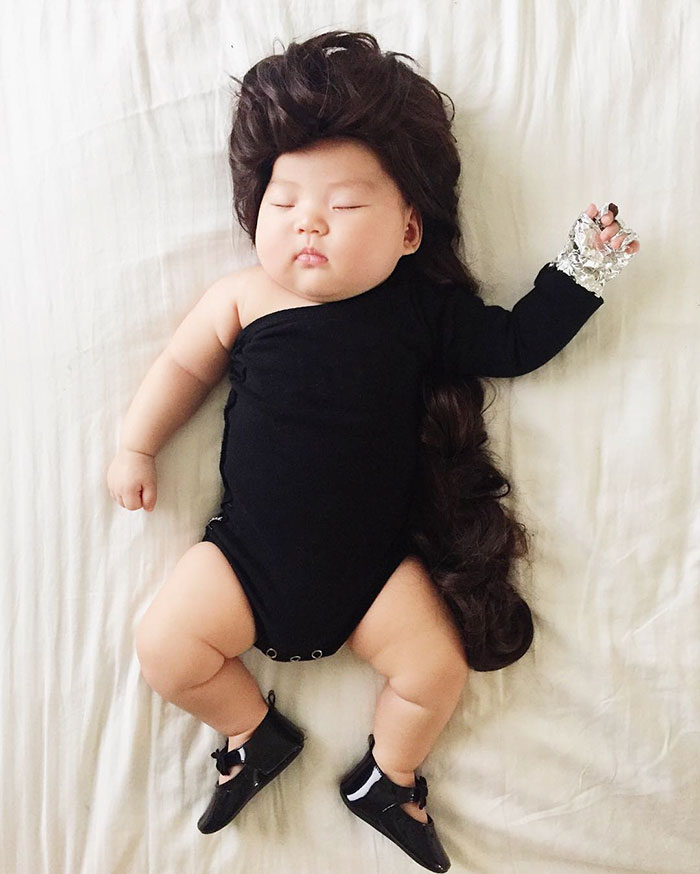 Ask any new parent, and many will tell you that learning to make a "baby burrito" is one of the most important skills when it comes to your baby's slumber. Your newborn was used to being tightly packed in your womb, so being wrapped in a swaddling blanket duplicates the experience, helping him to sleep better. 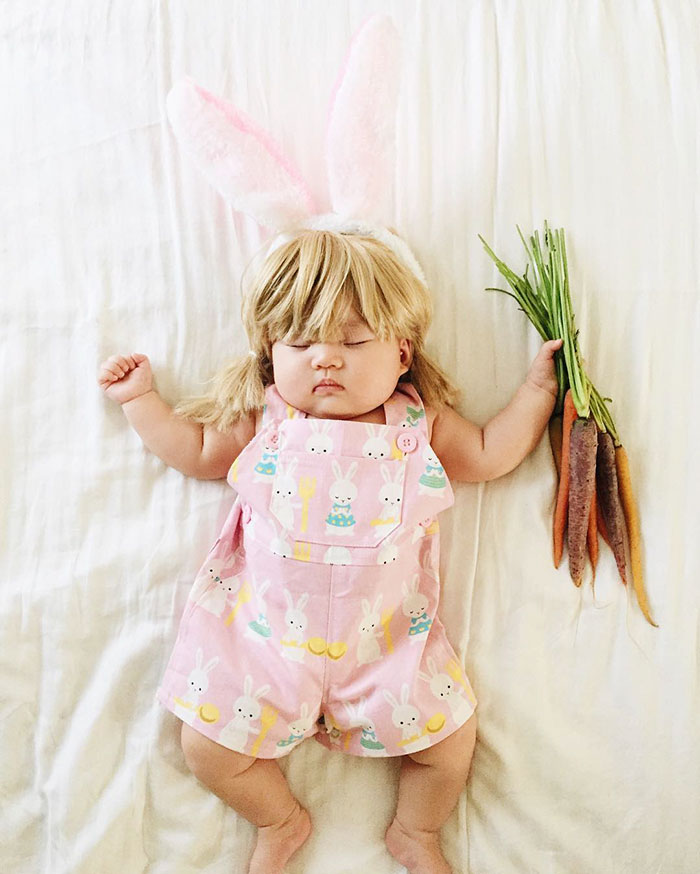 It doesn't really matter at this point if it's Goodnight Moon or Twilight (she can't understand yet and you might as well entertain yourself), reading a story before bed in a soothing voice is relaxing. It's also a great habit to carry on throughout childhood.

The most adorable mechanic 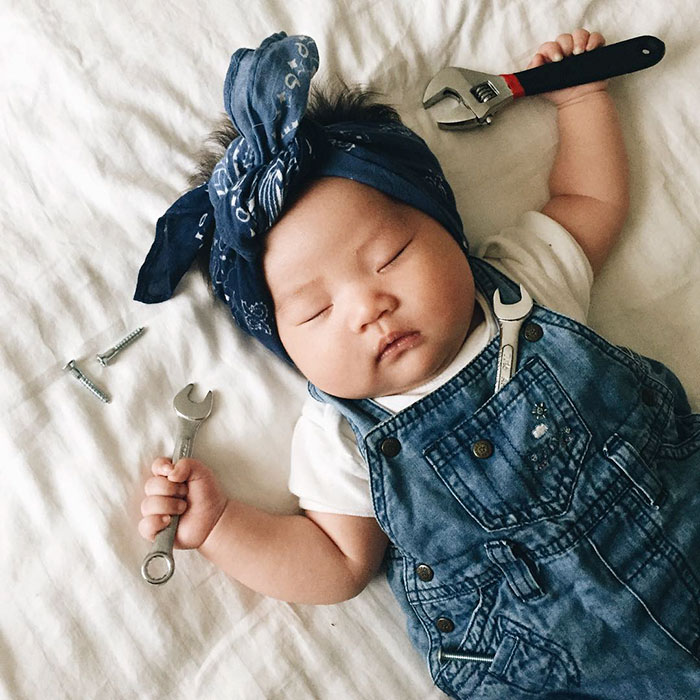 Instead of waiting for a full-on meltdown, look for cues that he's tired. He might rub his eyes, become whiny or yawn. Some overtired babies may do just the opposite and act wound-up, confusing parents. Pay attention to your baby's unique cues, and it will be easier to determine when he's ready for bed.