15 Most Unbelievably Gorgeous Pools In The World - Mundo EN
Omg

15 Most Unbelievably Gorgeous Pools In The World

Whether trying to escape the cold or just longing for a relaxing vacation, we all dream of lounging poolside and taking in breathtaking views. Though a nice change from the pace of everyday life, many hotel or motel pools can seem boring, shallow and sterile. The pools on this list are anything but boring, with their impressive and illusion like designs and the incredible scenery that surrounds them, these pools are destinations in and of themselves

1. The Infinity Pool at The One And Only Reethi Rah 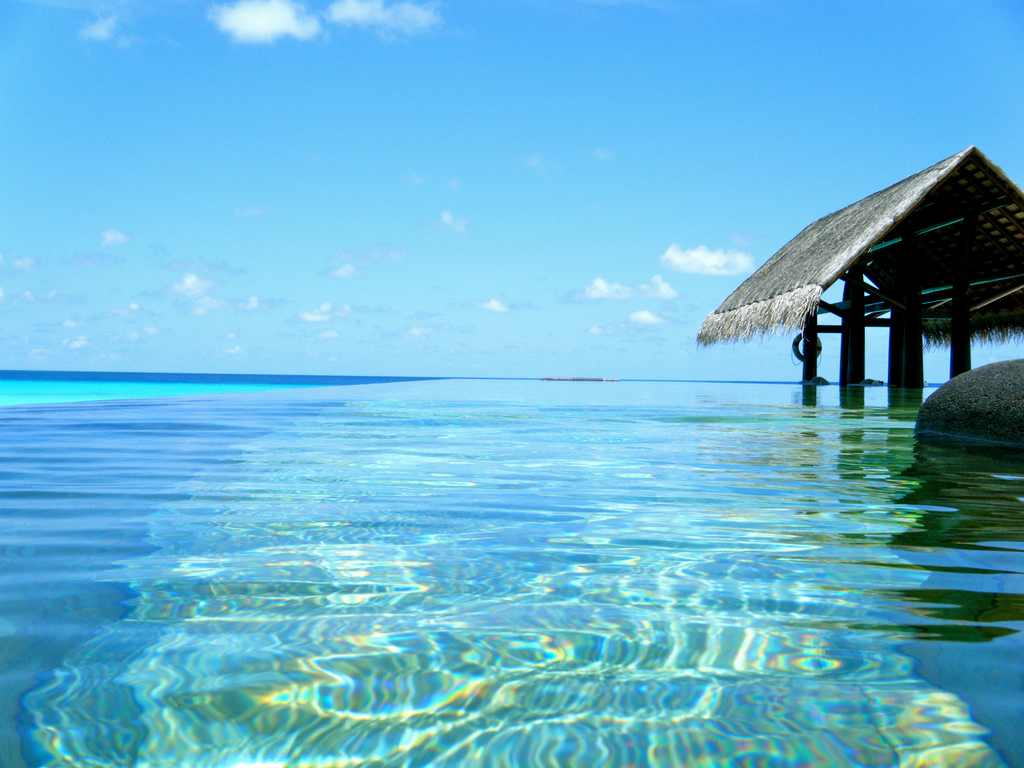 This pool is hidden in the beautiful ocean waters that surround this resort in the Maldives. 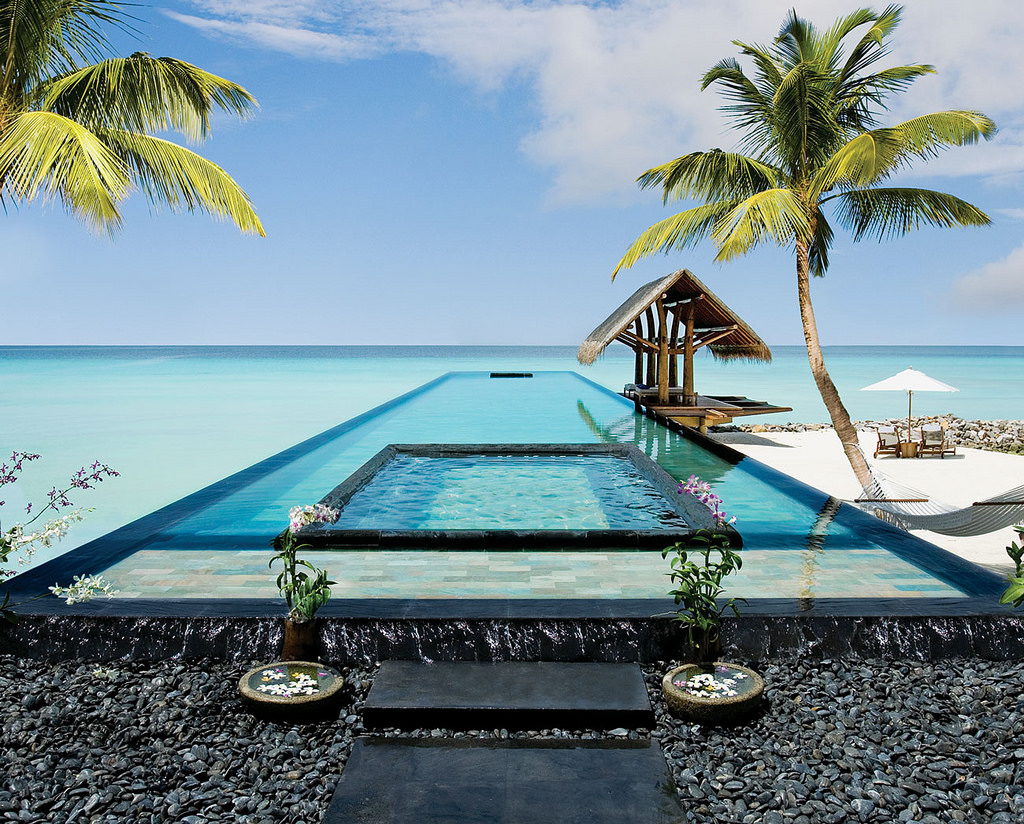 The pool is actually built into the ocean and provides visitors with a safe and beautiful but slightly surreal experience of lounging in calm waters even while watching the sea all around them.

2. The Infinity Pool At The Hotel Caruso

The breathtaking views of the mountain and seas that surround this pool are absolutely incredible and have to be seen in person to be fully experienced and believed. 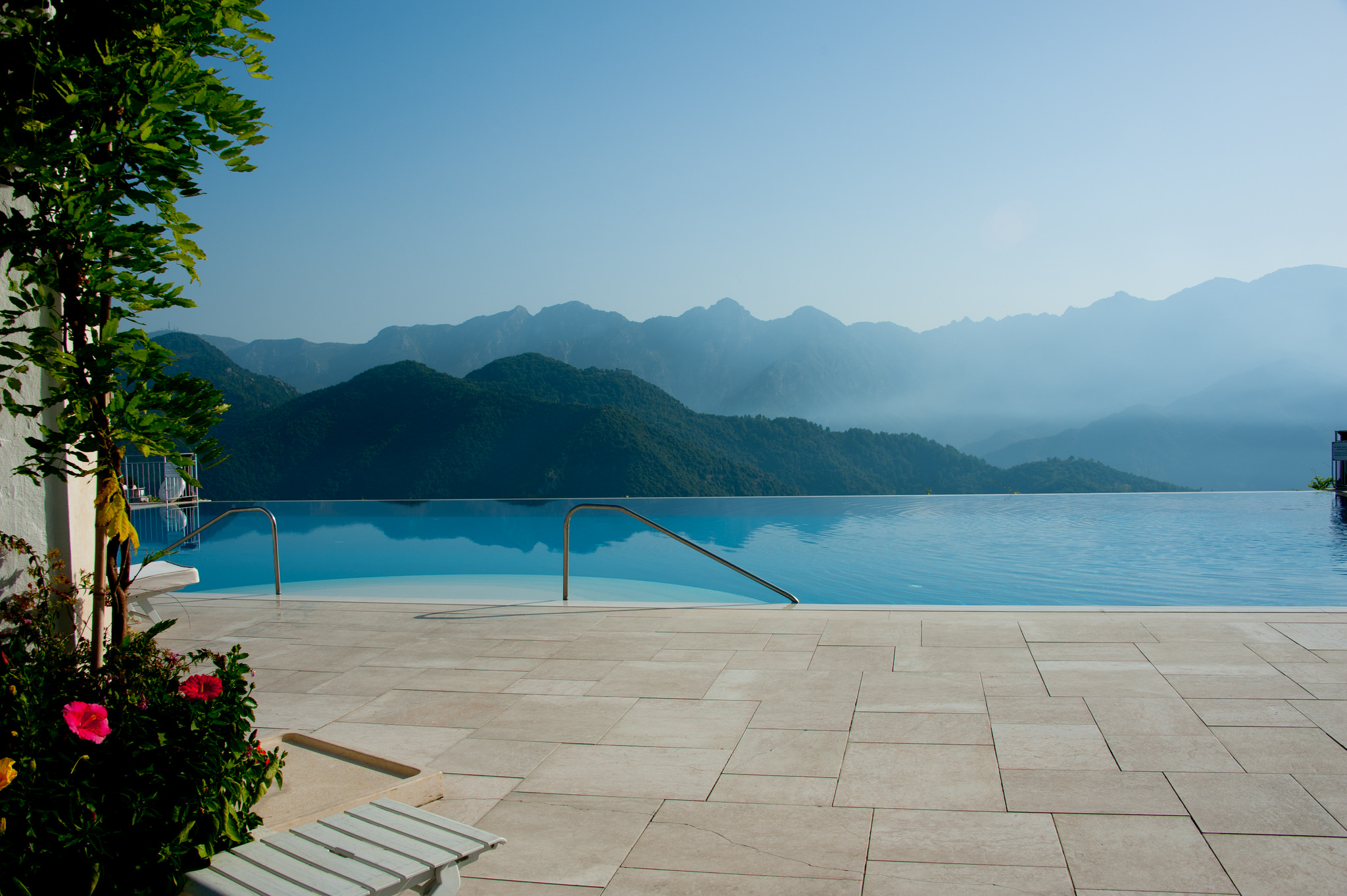 The Hotel Caruso is an Italian castle from the 11th century that’s been fully restored and now hosts its guests in style and luxury. 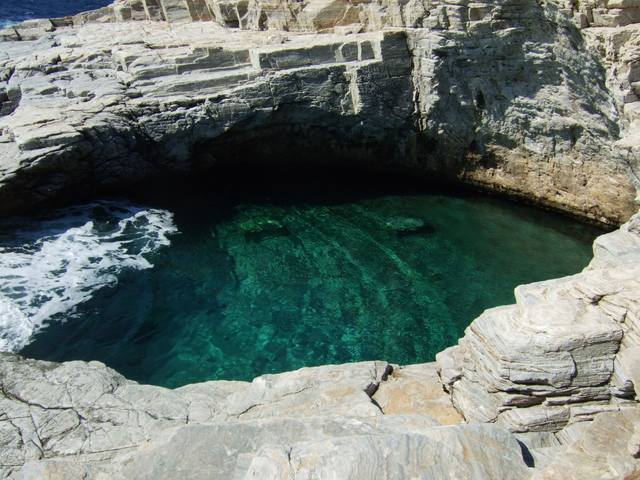 This natural pool in Italy is a reservoir of beautiful turquoise sea water. 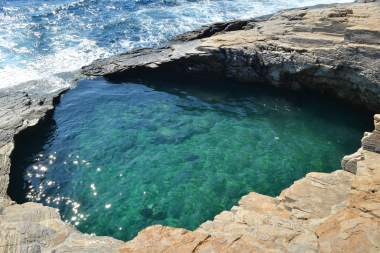 A hike from the main road leads you to this hidden gem that features mild waters and cliff that’s safe to dive from. 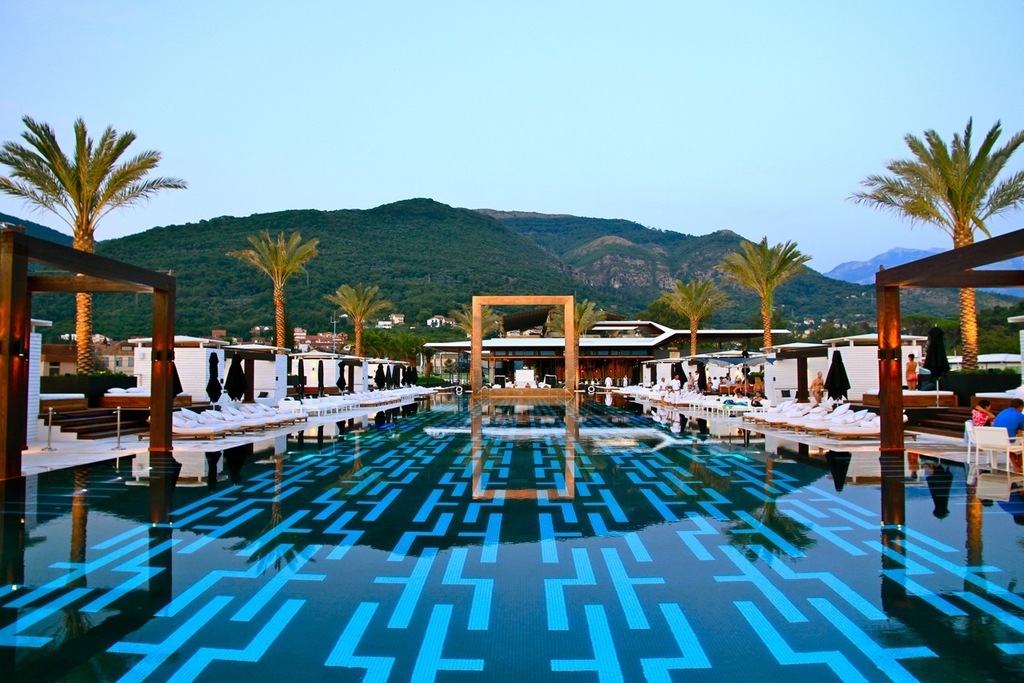 This infinity pool has a view that makes it appear to extend out to the ocean. This pool is designed to be stunning in the day or at night, and is surrounded by lounges to relax in and luxurious bars restaurants and shops. 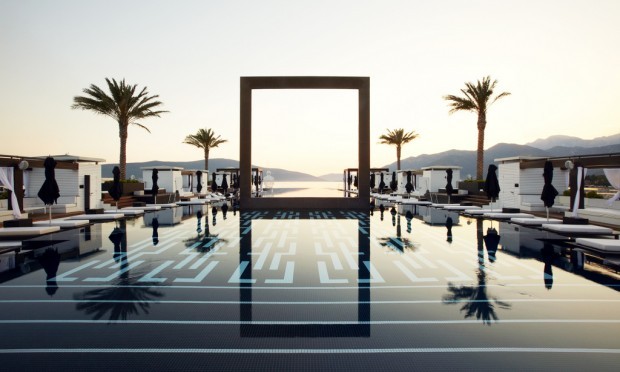 The resort hosts parties in and around this stunningly designed pool, and guests have an amazing time living it up in this swanky location. 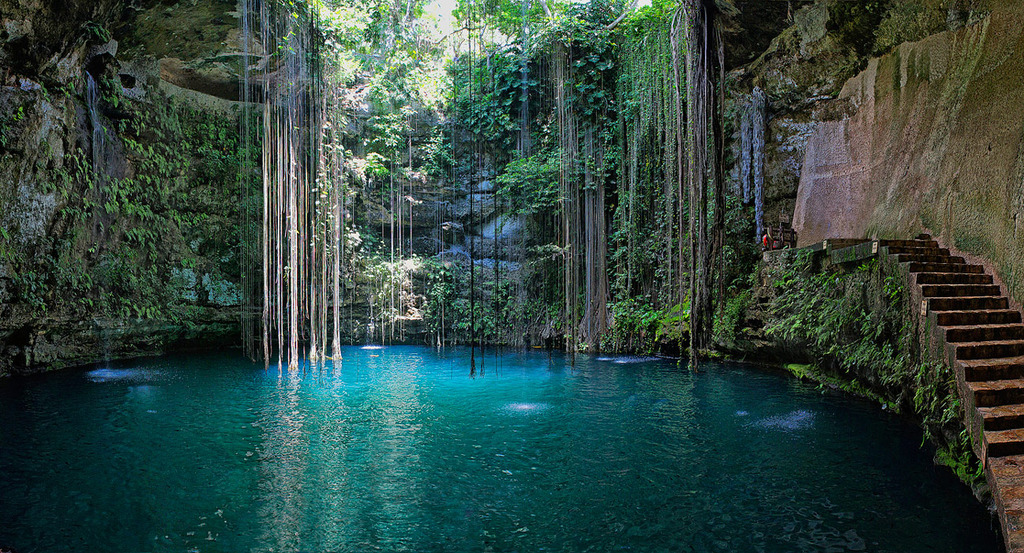 This natural pool is located in Ik Kil archaeological park in Mexico and charges visitors only $6 to swim! 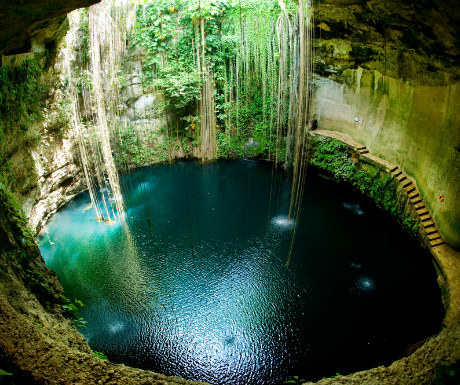 It’s jewel colored water and wild growing vegetation make this cave like pool an incredible sight to behold and an unmatchable and unforgettable experience. 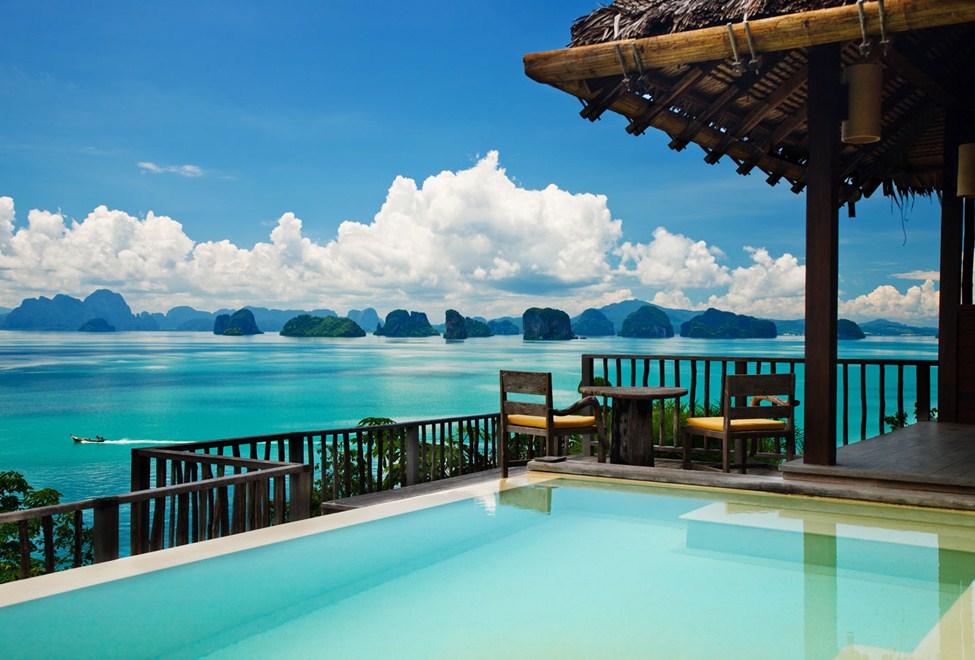 This pool in Thailand is incredible and serene. 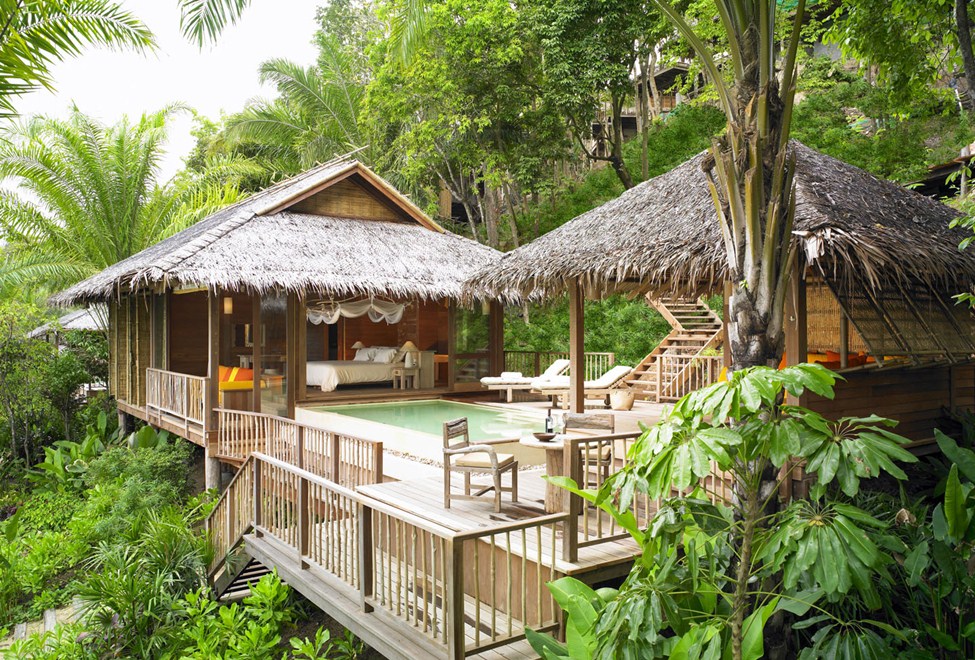 It has an infinity edge that seems to spill out into the ocean waters that surround it and looks out on gorgeous limestone formations that jut out of the sea. 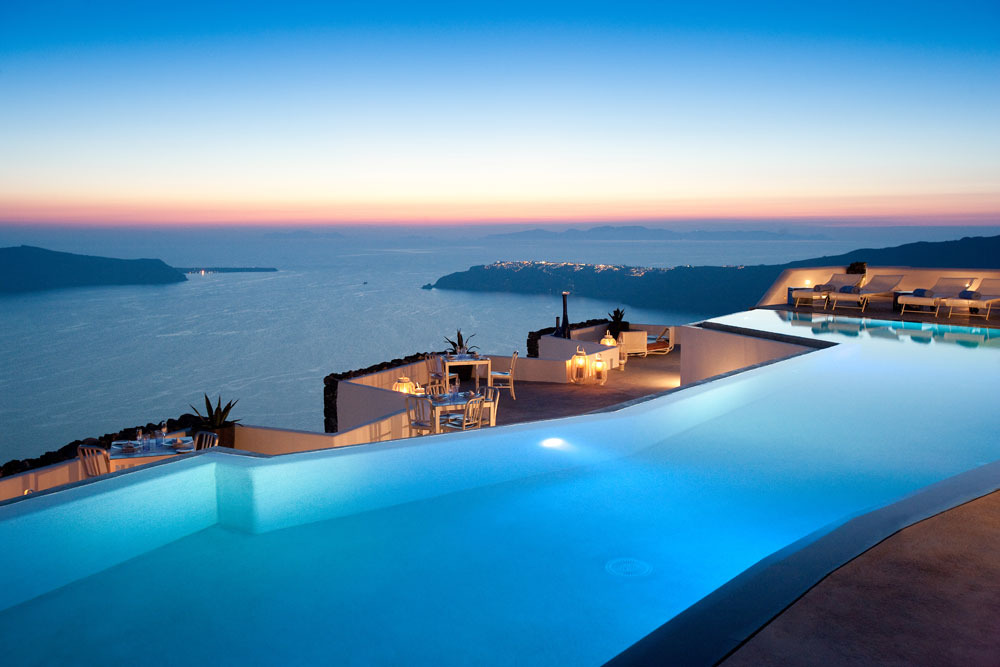 This boutique hotel in Santorini Greece overlooks the famous Caldera for an incredibly breathtaking view of the waters and scenery that surround it. 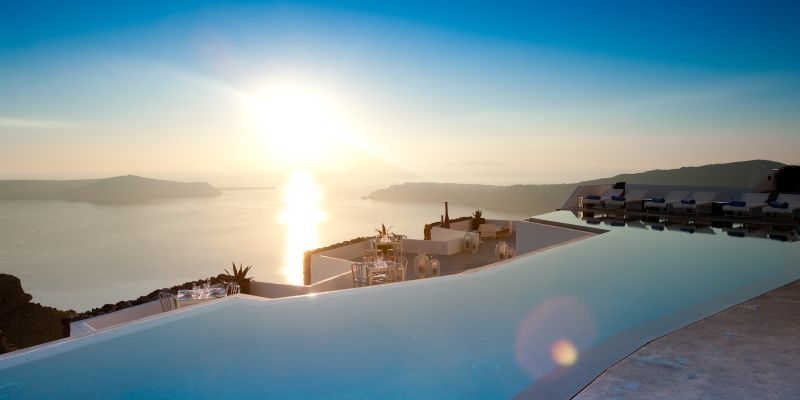 With a view of the Aegan Sea, this ultra chic boutique hotel, has one of the most incredible pools in the world. 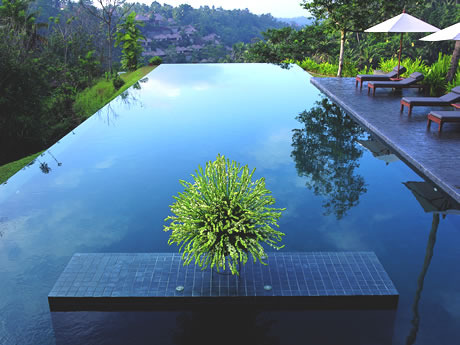 Nestled in the Ayung River valley in Bali foothills is this pool that has an infinity edge that overlooks the river. 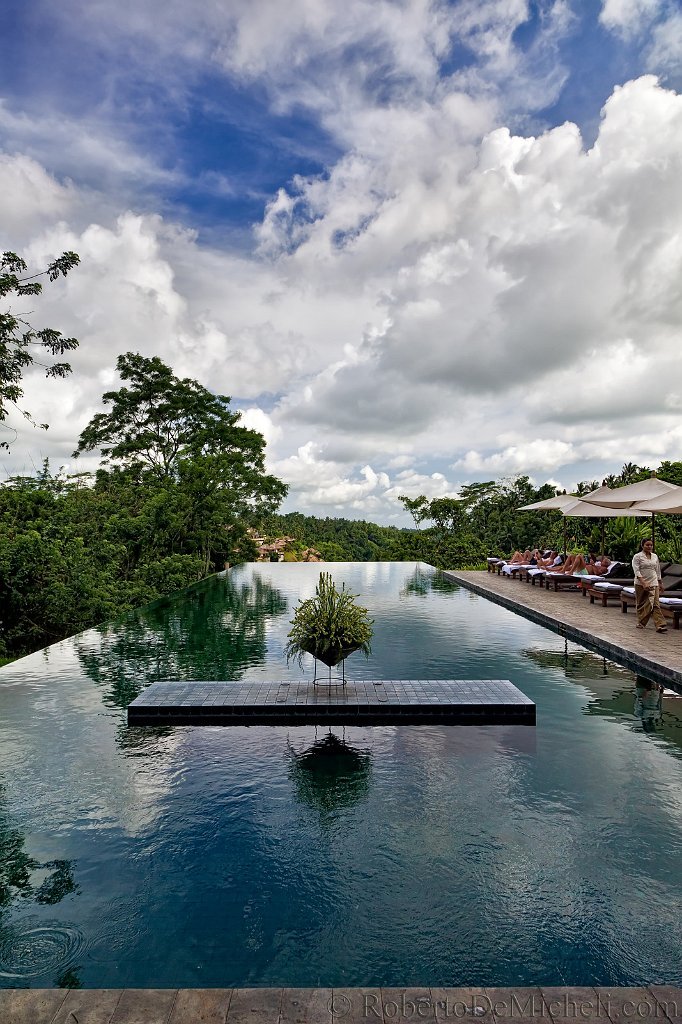 And gorgeous green scenery that truly has to be experienced to be believed. 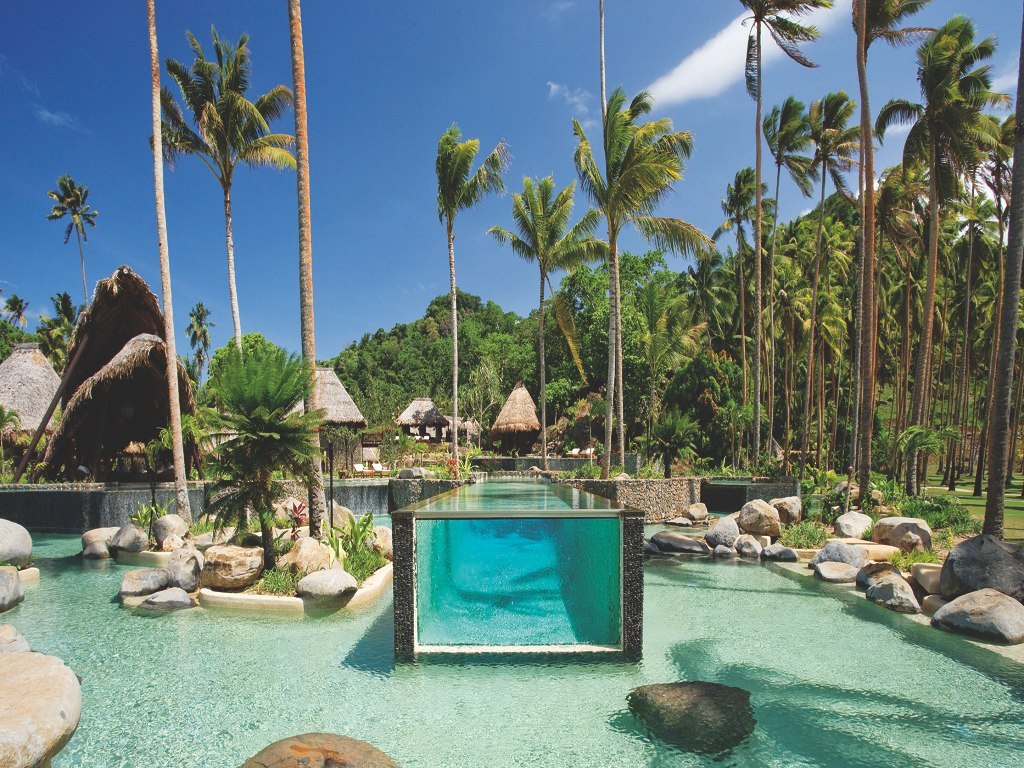 This pool within a pool sits in the incredibly beautifully designed resort among the gorgeous scenery and landscaping of the rest of the resort. 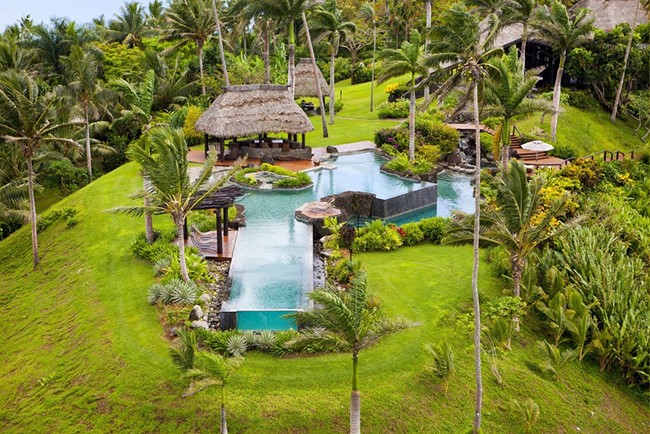 That includes villas for guests to stay in and a pool bar designed to look like a shell. 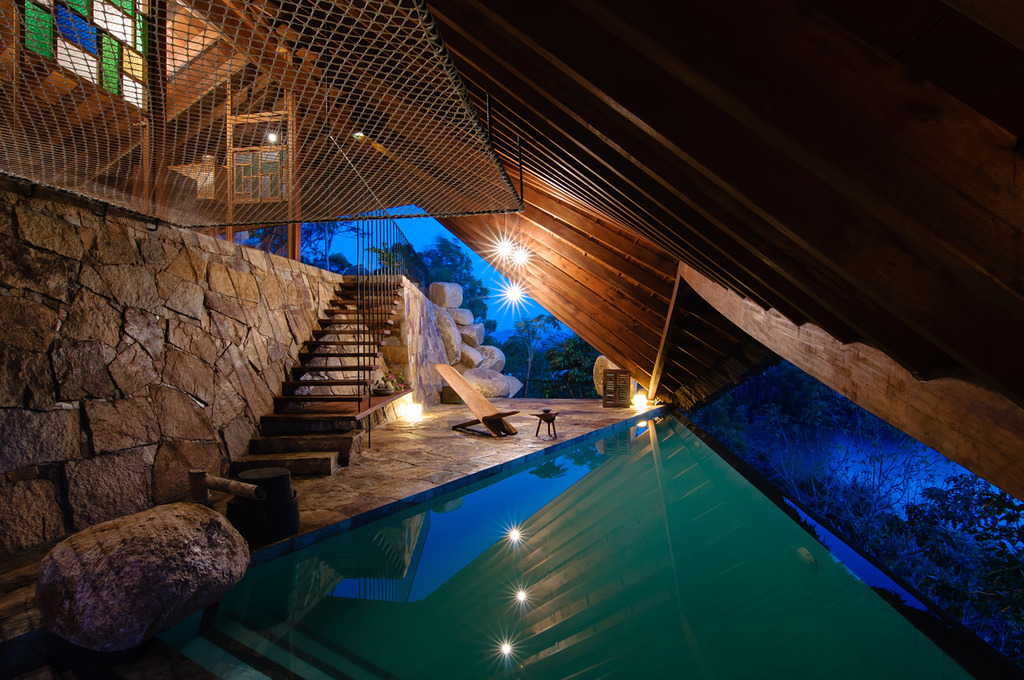 The infinity pool at this spa in Vietnam is covered by a low hanging wooden roof that shields visitors from the sun or rain and adds to the natural and rustic feel of the scenery. 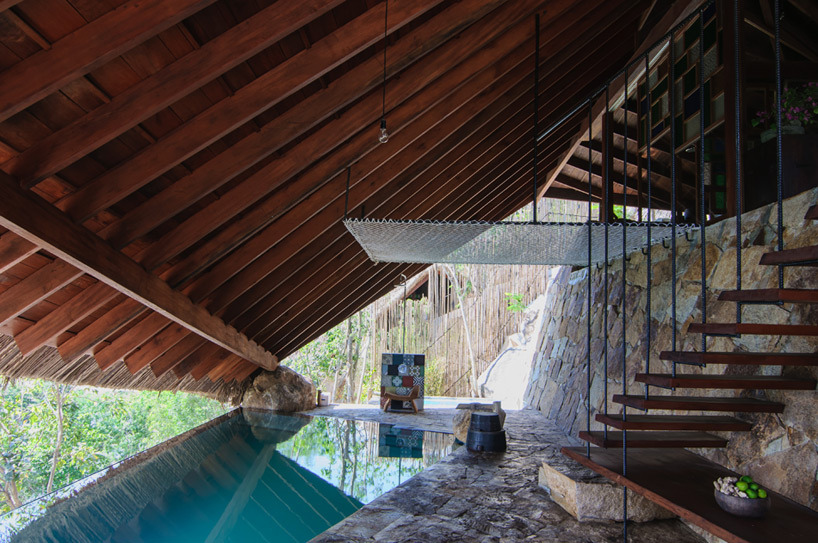 The pool is part of a small resort and spa perched high atop a rocky hill. 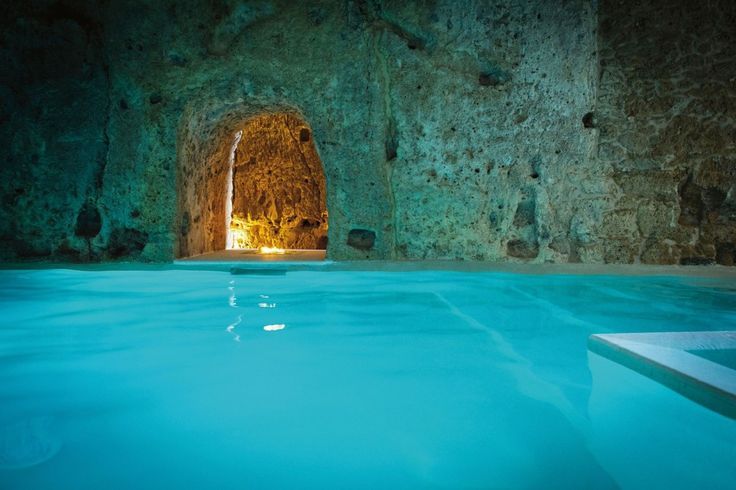 The entire structure and scenery of this Italian vacation home is breathtaking and idyllic, so much so that the wonder of this property extends underground. 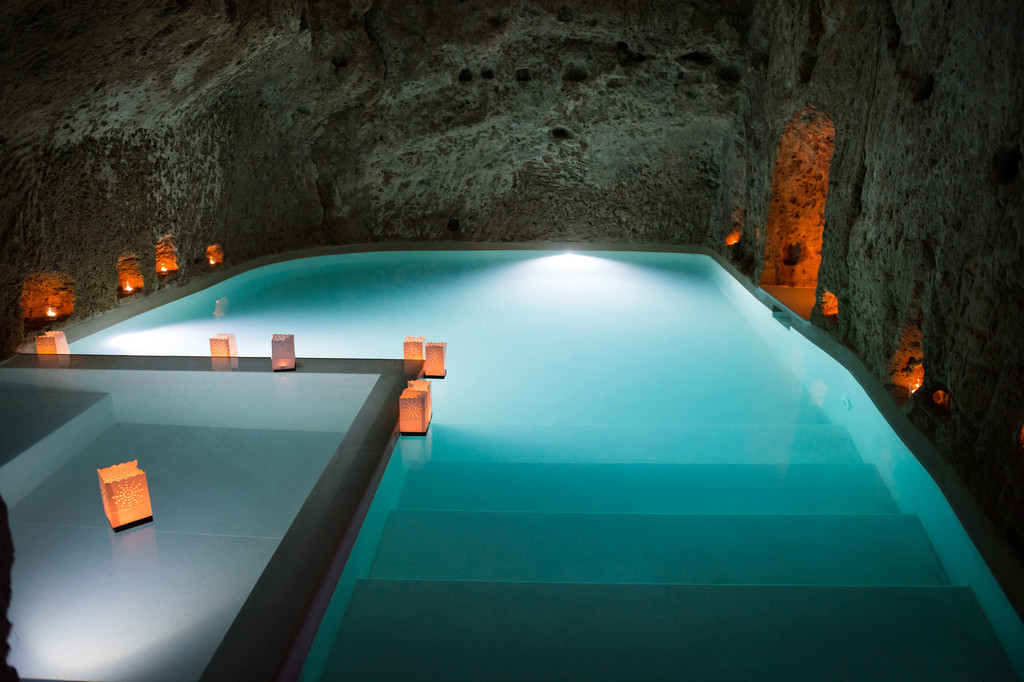 The pool here is in the basement, and will provide guests with an underground underwater experience second to none and unlike anything else they’ve ever seen.

Built in the ruins of an okd Mexican estate, this pool has an atmospheric feel. 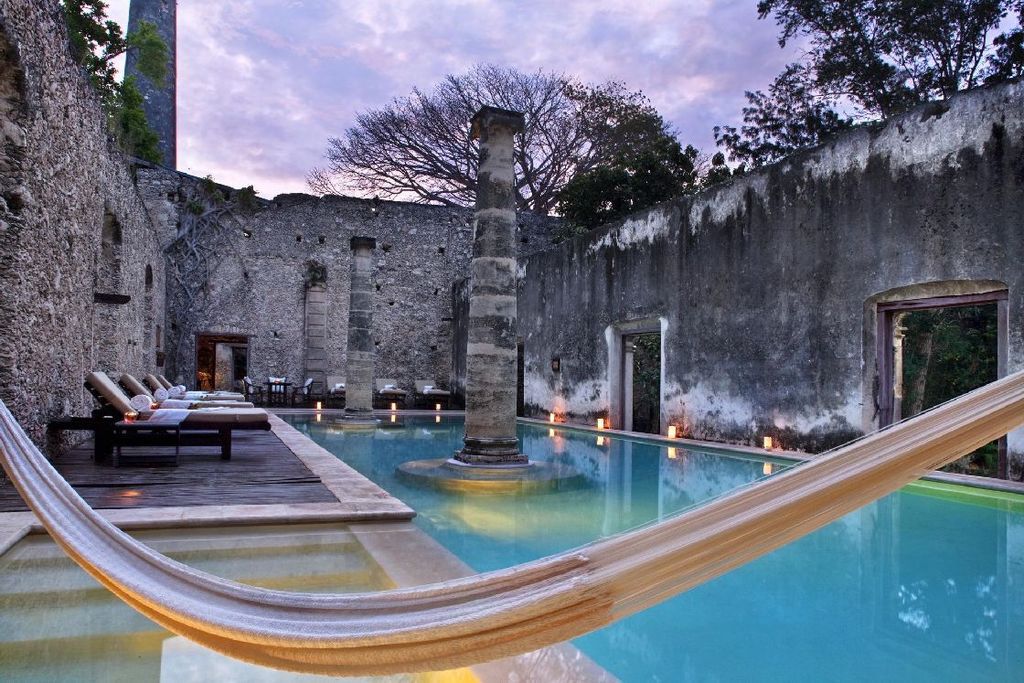 The moody and glamourous scenery is the perfect place to relax, reflect, and unwind in luxury. 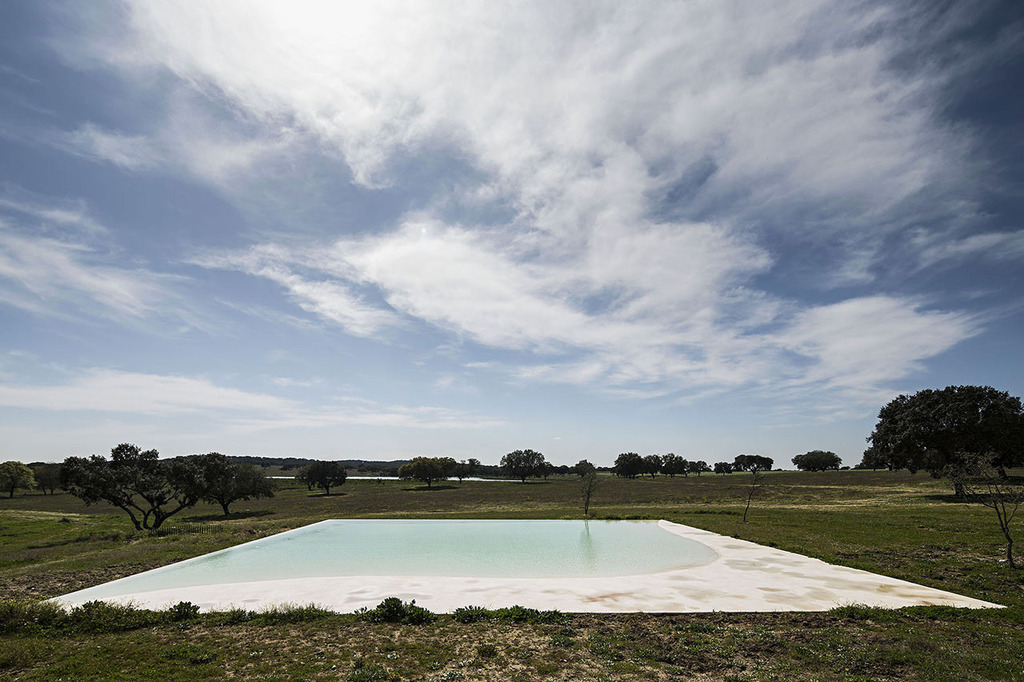 The sunken pool of Casa No Tempo is built directly into the sprawling grounds of this serene country estate in the green and gorgeous lands of Portugal. 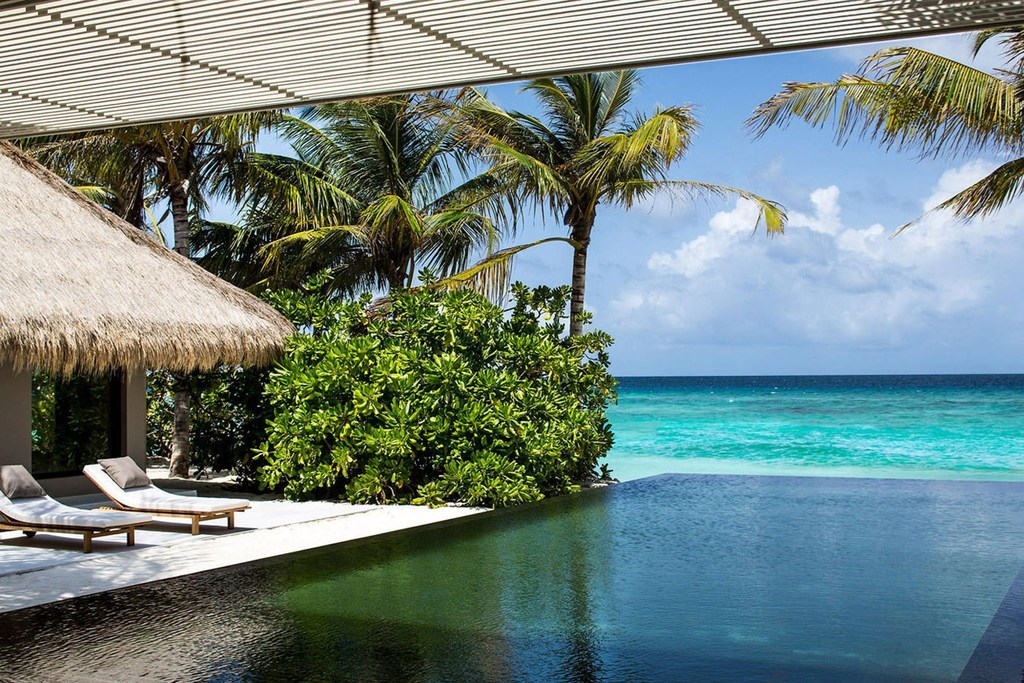 This sunken pool that looks as though it’s built into the ocean is completely the epitome of glamour and beauty. 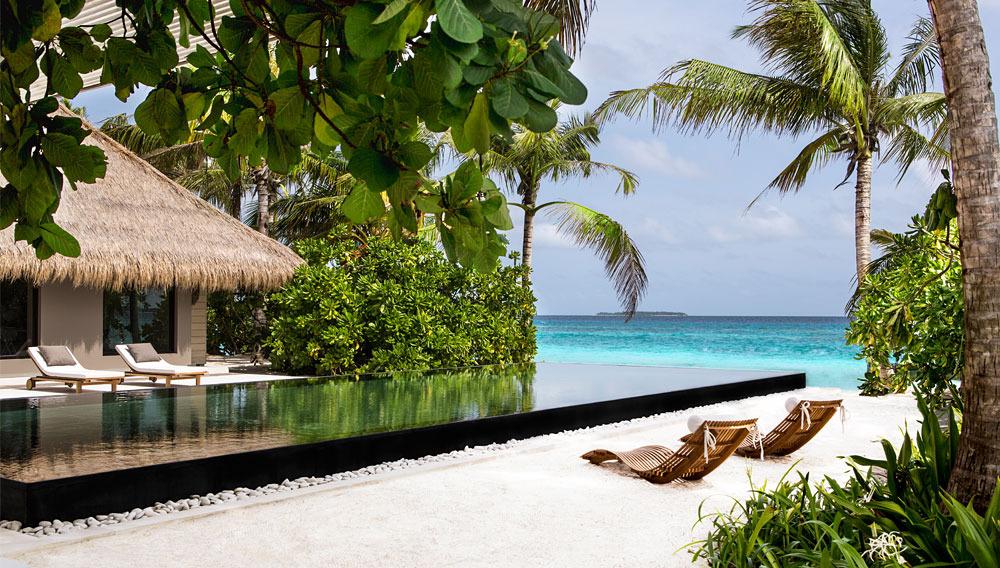 With its stunning view of palm trees, white sand and turquoise waters and is just one of the many pools and water activities available at the luxurious resort in the Maldives. 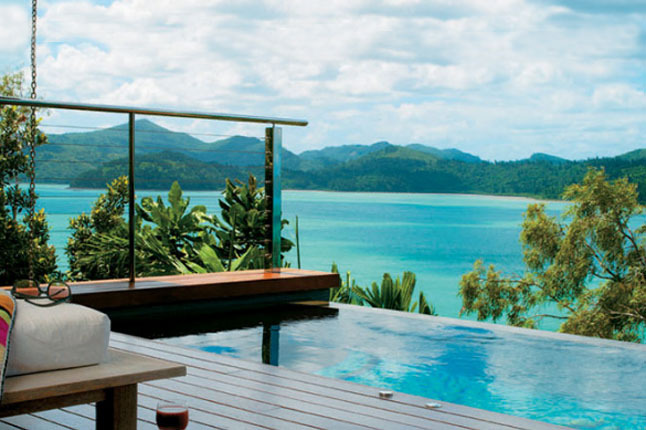