Father figures are very important to children. Often times they bring fun and enjoyment into their lives and make them smile. Dads can often be big children at heart which is what kids need sometimes. These dads are doing parenting the right way, fun and laughs. 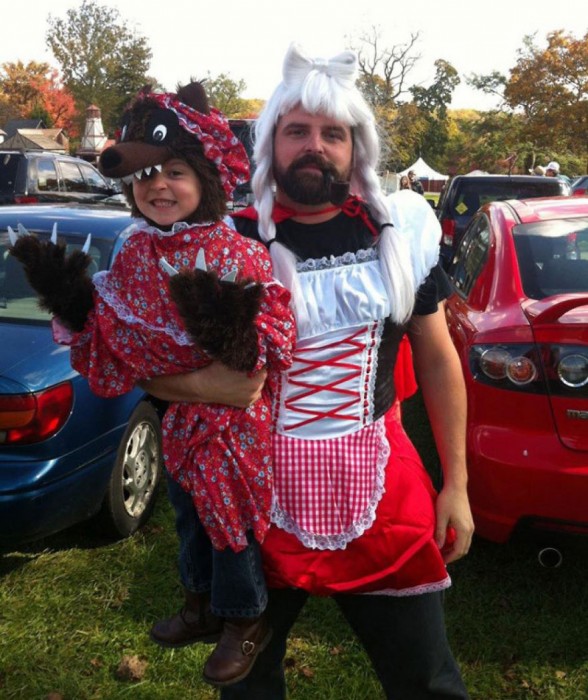 meltybuzz.fr
This dad sure knows how to do Halloween right. He does whatever it takes to make it a great day for his little girl. Even if it takes dressing up as little red riding hood, he will make sure she has a night, and a photo, to remember. 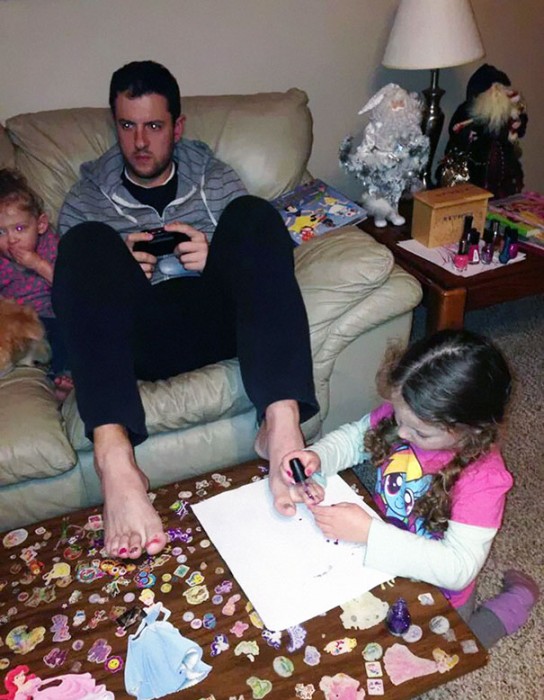 imgur.com
Some dads will do whatever it takes to make their daughter happy. This one is sitting quietly as his daughter paints his toenails bright red. He seems okay with it as long as she is happy though. 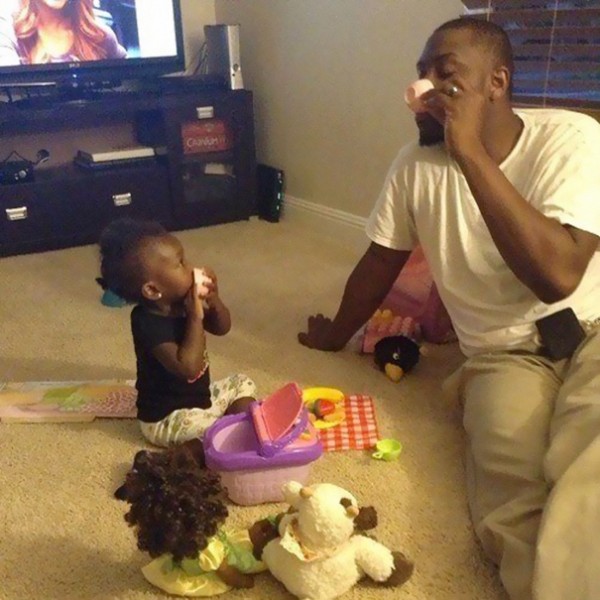 imgur.com
This daddy knows how to show his daughter a good time, he has taken her on a tea party picnic right in the living room. No matter how silly he looks sipping nothing from a tiny, pink, plastic cup, he is happy to make her happy. 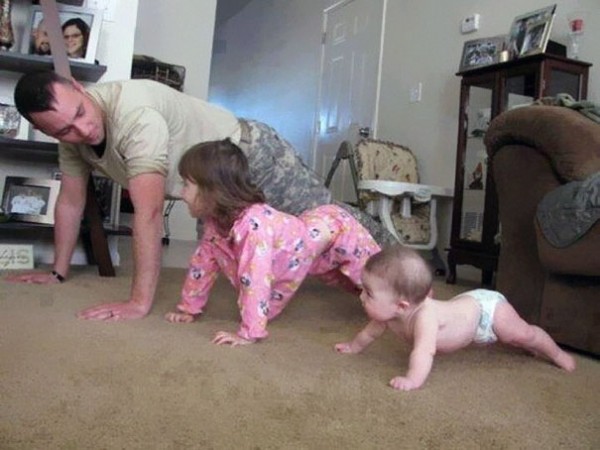 imgur.com
This military dad knows how important exercise is to a well rounded child. In this photo you see the whole family doing their pushups. Even the baby is getting some tiny muscle development. Isn’t it great to see a family working together? 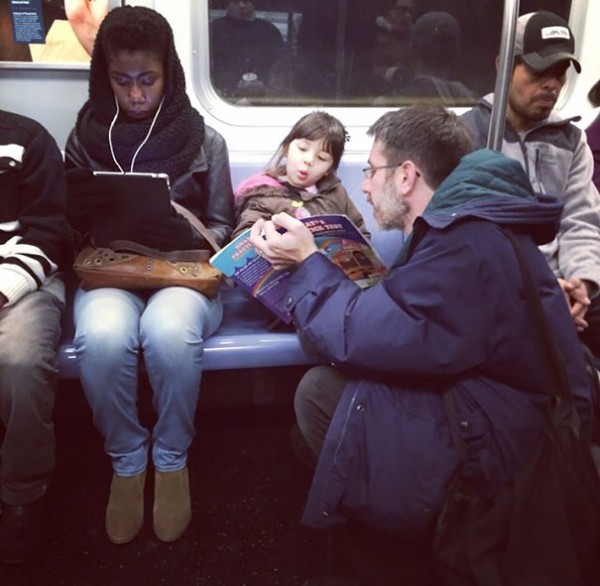 imgur.com
Now this is a father concerned with his daughter’s education. Even on the subway he is bending down to read to her and help her learn what she needs to know. Now that is dedication to your child! 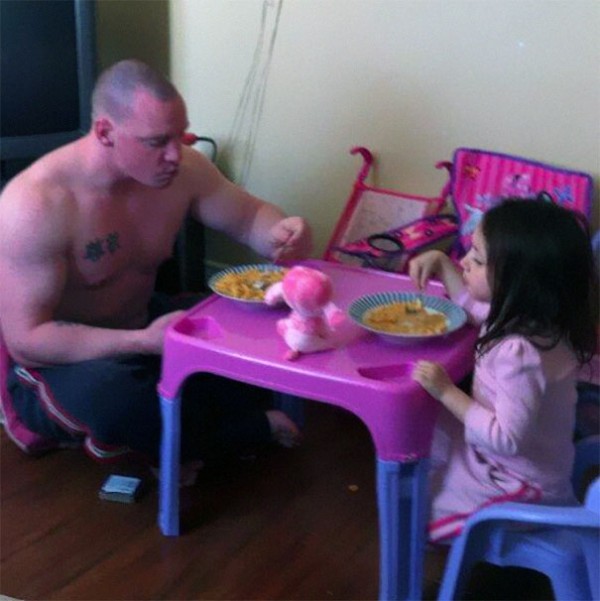 imgur.com
Depicted in this image is a father having breakfast with his daughter. Instead of eating their cereal at the kitchen table they are both eating at a tiny pink table just her size. While it fits her perfectly, that can’t be super comfortable for dad. 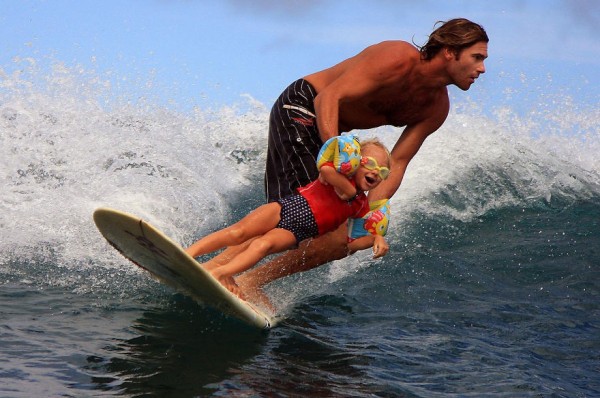 surfline.com
This dad knows how to have a swell time. This father, a surfer, has taken his little girl along for the ride. The two of them fit perfectly on the board and she seems to be having the time of her life hanging ten. 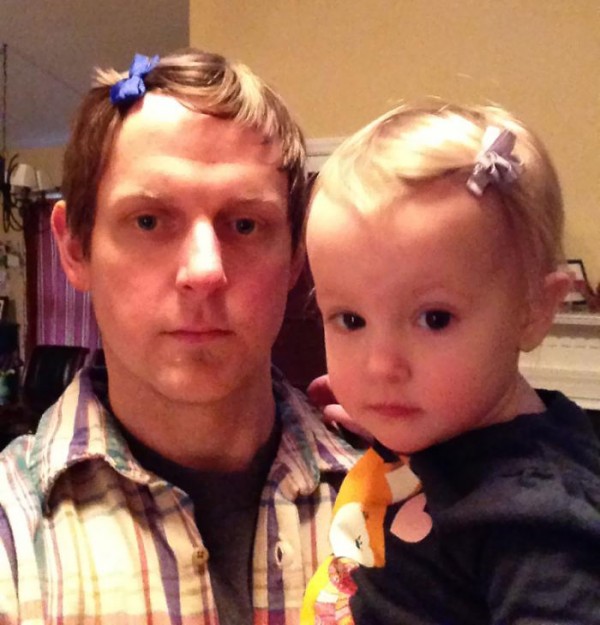 monkeyinpants
Oh what some dads will do for the kids. This one has chosen to have the same hair style has his little girl in order to make a perfect photo op. They look like two peas in a pod with their matching hair accessories. 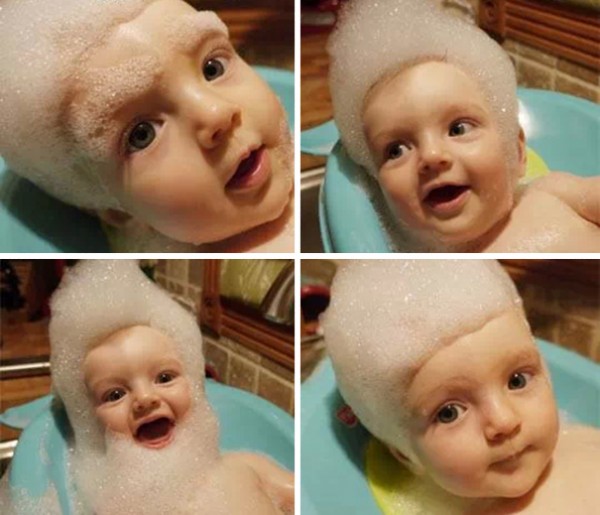 imgur.com
This baby is having the bath of a lifetime with lots and lots of bubbles. So many in fact that there were some to spare to use as props to make the baby look like he has different hir styles and even a beard. This is just too cute and super fun. 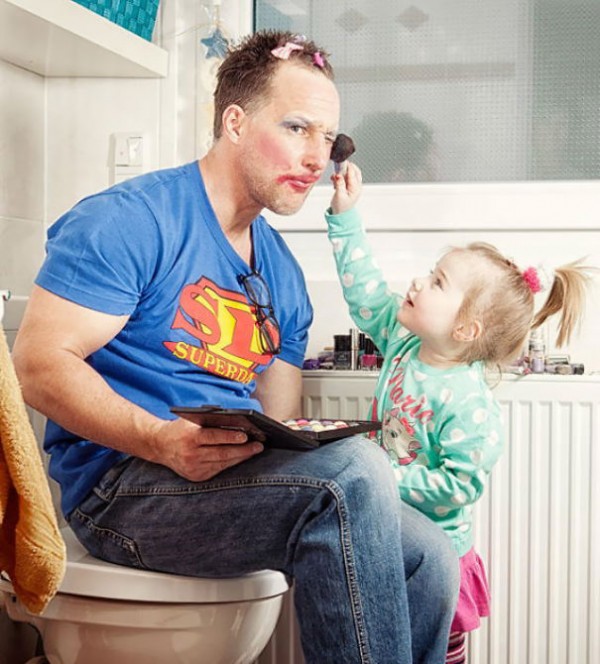 Andiheld
This is a tolerant father with a great sense of humor. He is letting his daughter put makeup all over his face and bows in his hair. While being made up like a girl, he still looks at the camera for the photo. Now that’s a good dad. 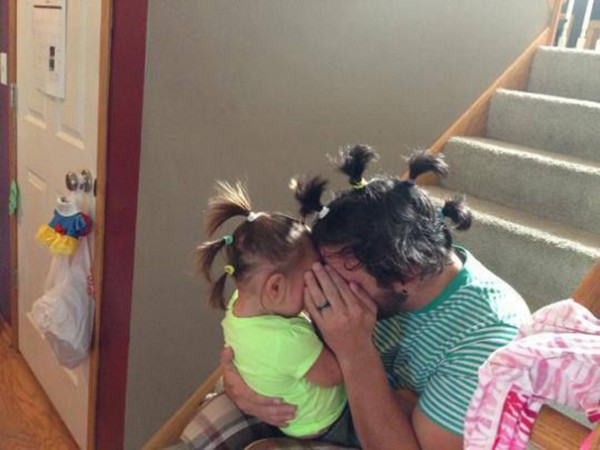 Hilary Maxim
In this photo daddy and daughter have matching ponytail Mohawks. This dad is a good sport about playing around with his little girl. Anything he has to do to make her smile is worth the effort. 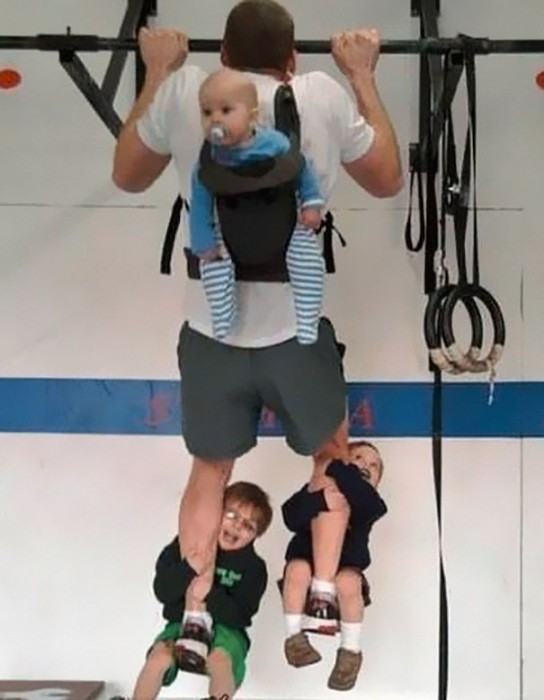 imgur.com
This dad has a good workout with lots of weights. He lets his children act as the weights too! It can’t be an easy way to exercise but the kids sure do seem to be having a good time. Good Luck Daddy! 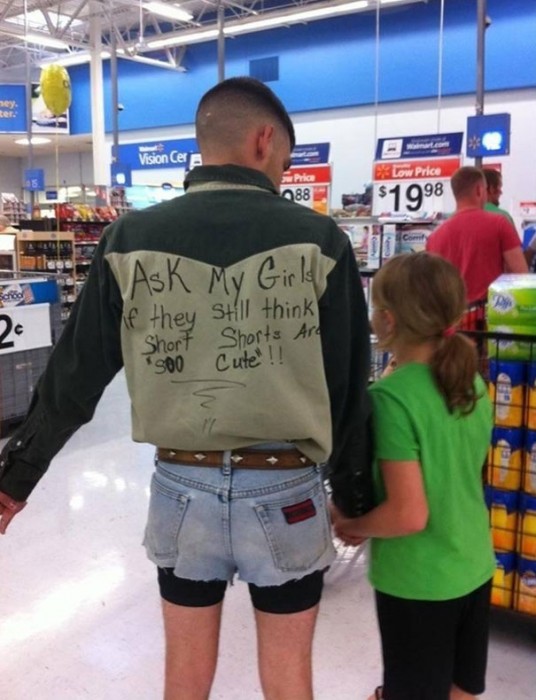 imgur.com
This father teaches his girls a valuable lesson in why some clothes are inappropriate to wear out by example. He wears short shorts himself to prove that just because they look cute doesn’t mean they should be wearing them. What a fun way to teach. 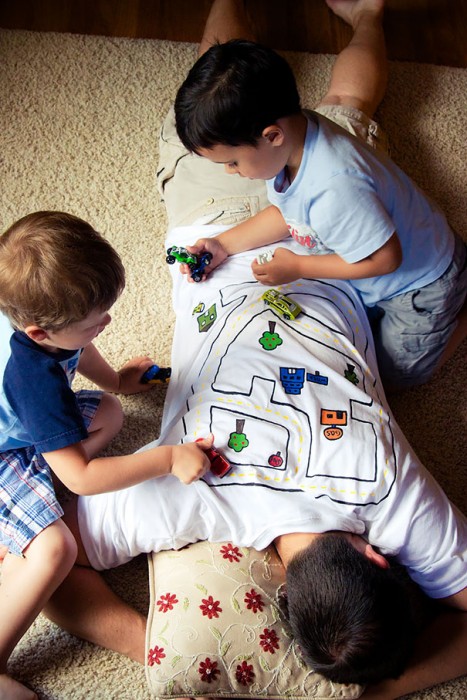 thewinthropchronicles.blogspot.com
This dad appears to be getting a soft massage while he lets his boys play with their toy cars on his shirt. The shirt acts as the roads that they are driving on because of the pattern and he just lays there still and lets them play. 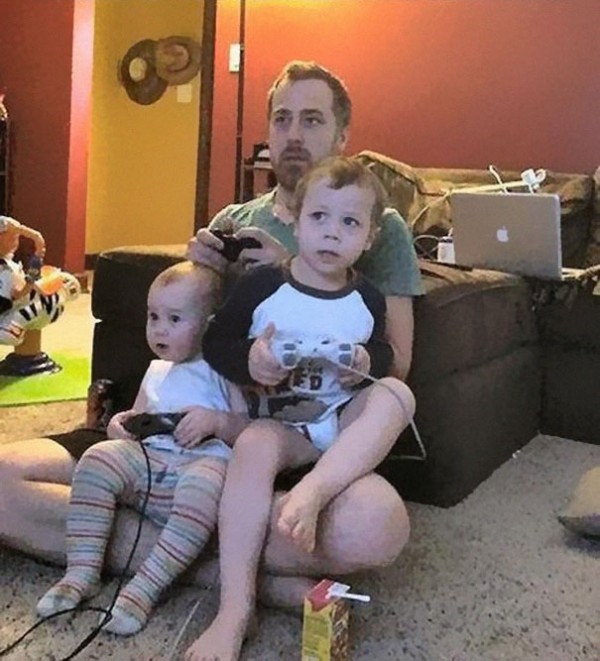 cheezburger.com
As stated before, dads can be like giant kids at heart. This dad plays video games with his children and he seems to be just as into it as the kids are. It looks like they are all having a good time. 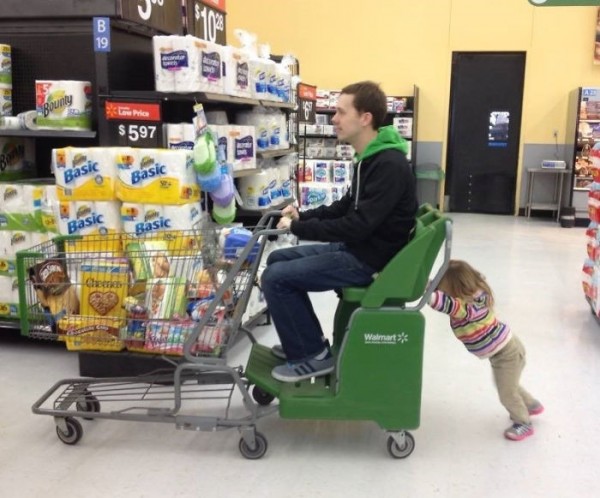 desconocido
It seems like this little girl wanted her turn pushing the cart while daddy sat in it and dad was happy to let her try. It doesn’t seem like she is having much luck but what baby wants, baby gets.

Lina D.
This dad doesn’t seem to know how to make a pony tail. Instead of doing it the traditional way he opts for putting all of his daughter’s hair in the vacuumed extension tube and slipping on the hair tie instead. 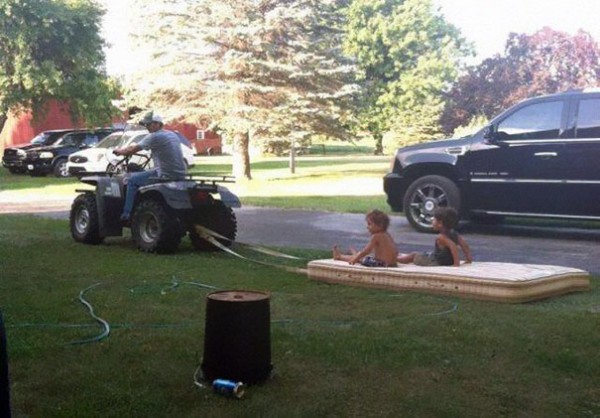 imgur.com
Mommy said the boys had to stay in bed. In this photo, dad uses his ATV and a mattress to make a fun sled game for the kids. Now that is what I call making your own fun! The kids seem to really be enjoying it. 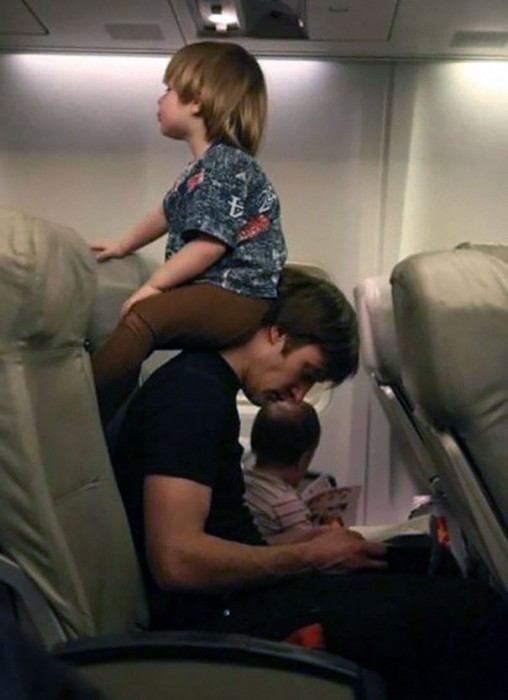 imgur.com
Dads are the most comfortable chairs. Always. In this photo a dad seems to be letting his son use his head as a seat on a plane. With a baby in his lap and a child on his head, he sure does have his hands full with this one.
Compartir este artículo
Mundo.com