The ancient art of trees. A woman spends 14 years photographing the oldest trees in the world. - Mundo EN
General

The ancient art of trees. A woman spends 14 years photographing the oldest trees in the world.

Ancient trees are pure artwork in and of themselves. Just ask famed photographer Beth Moon, who through her work, has managed to capture and preserve some of the most intriguing trees of all time. To have the privilege of witnessing these divine creatures up close and personal must feel just short of sensational. Though beauty is in the eye of the beholder, the majestic view of these ancient trees from all over the world are sure to inspire awe in the viewer.

This ancient beauty is coined The Heart of the Dragon and is specific to Socotra, Yemen. These endangered trees were once part of a thriving forest, but today, only a few remain. These plants can live well over 400 years and have been known to weather some of the worst conditions. Over the years, the trees limbs elevated to absorb moisture from its environment, which can be attributed to its trademark look. 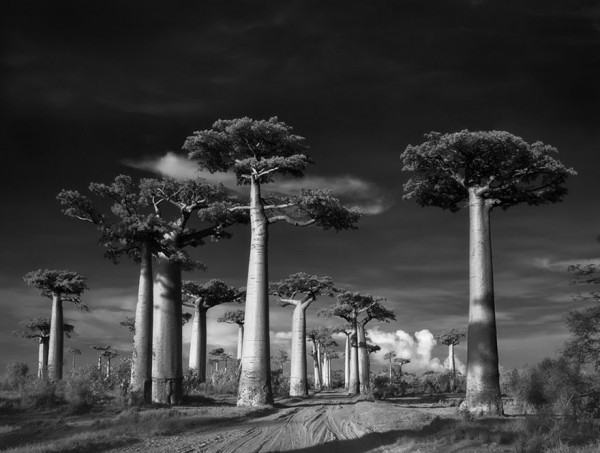 The Avenue of the Baobabs brings distinct beauty and charm to the Island of Madagascar with its graceful form and appearance. These trees sprout up to 98 feet tall and are exclusive to Madagascar. 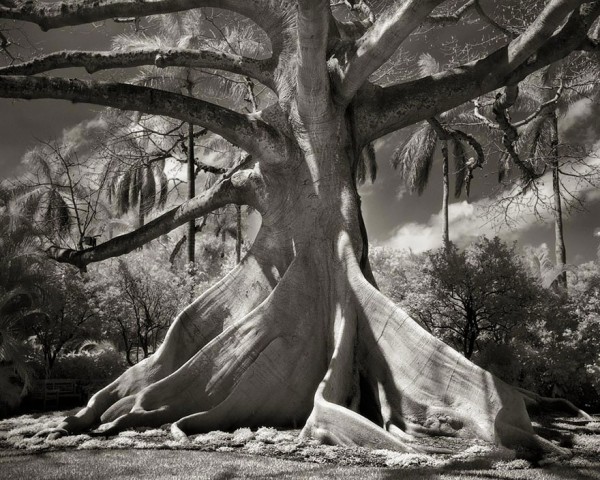 This distinct character is the Kapok tree. In its essence, it is the tallest tree in the Amazon rainforest, easily reaching heights of 200 feet. However, this whimsical treasure, whose roots emerge 12 feet above ground level, was found hiding out on a private estate in Florida. 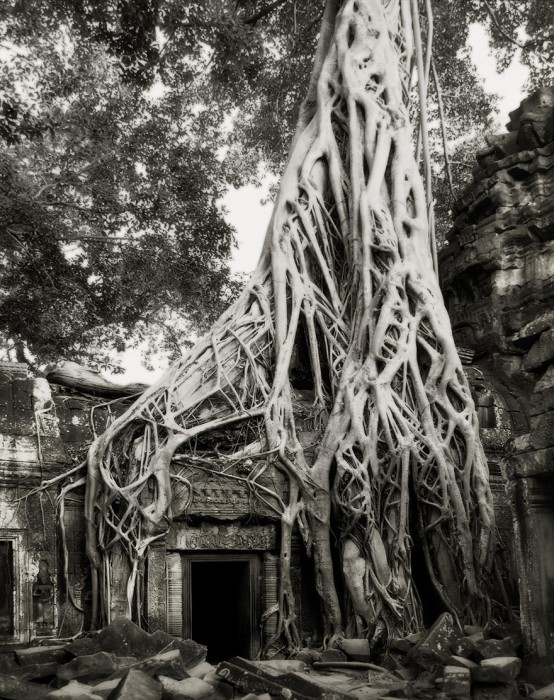 This majestic beauty looks like it rained down straight from heaven. The raining, intertwining threads of white bark framed by the chorus of surrounding trees, resembles the wonderland scene produced by icicles hanging from the trees after an ice storm. Why wait for the perfect storm, when you can be reminded of the beauty of winter each time you view this natural beauty, titled The Strangler Fig? Buddhist temples are often mounted by the trunks of ficus trees, whose roots invade in desperate search of soil. 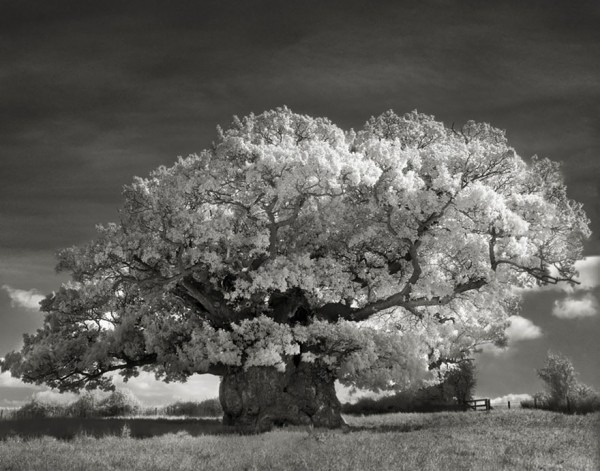 This 1,000 year old classic beauty, located in Manthorpe, near Bourne, would be the apple of Oprah Winfrey’s eye as well as many other garden party goers. This Bowthorpe Oak’s grand, hollow trunk has been the site of many parties, and is rumored to fit up to 3 dozen people. 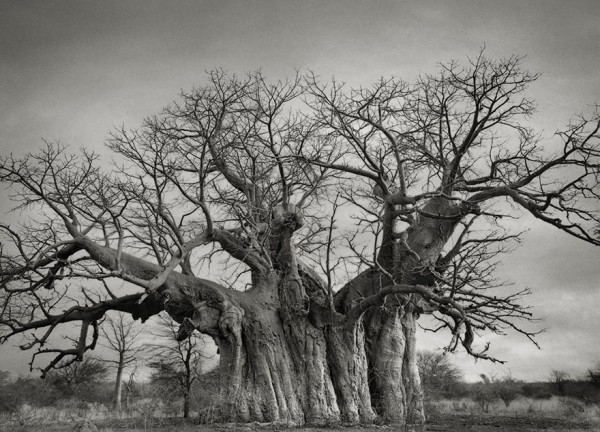 When viewing this mystery feature, one can only imagine that Moon must have found beauty in Greek mythology, as this tree kind of reminds you of the Grey sisters, better known as the three blind women. 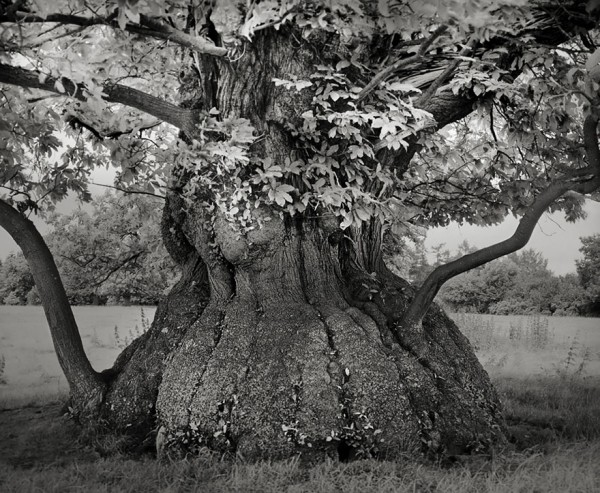 The Croft Castle Chestnut is fit for a king and rightfully so! These privileged trees can be found forming the avenue of trees at the late 17th century Croft Castle located in Herefordshire, near Leominster. These historical trees are believed to be the trace remains of nuts from the infamous wrecked Spanish Armada of 1592, which would put them at well over 200 years old. 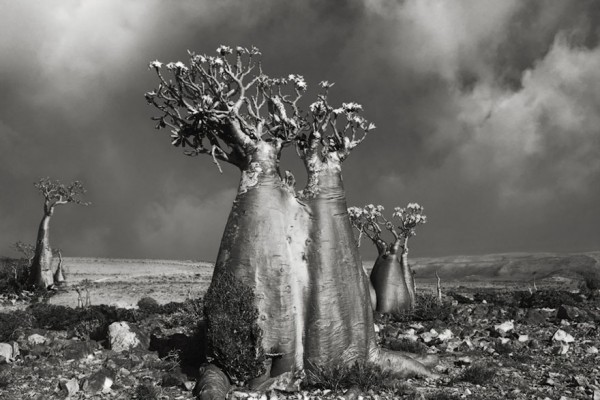 These bizarre bottle looking trees are known as Desert Rose. They come in a variety of bizarre shapes and sizes and can only be found in the tropical desert of Yemen, Socotra, which is known for its 25 degrees Cecilius temperatures and lack of rain. Not only can these eccentric plants survive hostile weather, but they can even grow on rock! 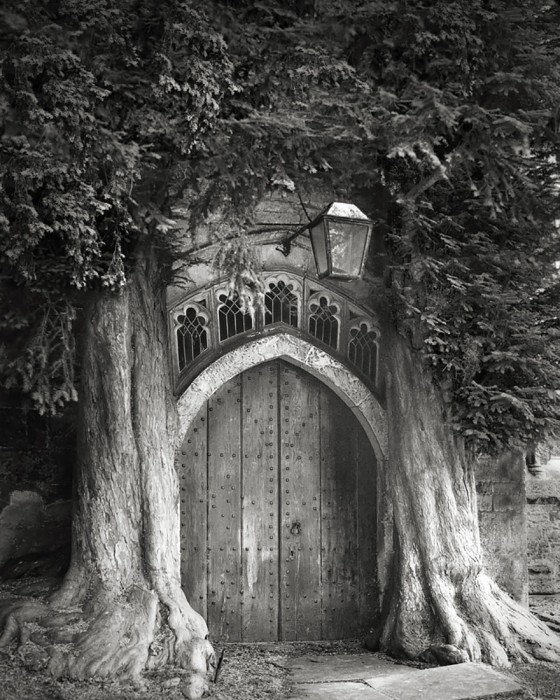 These 18th century yews can be found adorning the entryway at Sentinels of St. Edwards located in Stow-on-the-Wold, England. They are believed to be the honored ceremonial path that directed visitors to the entry of the church. 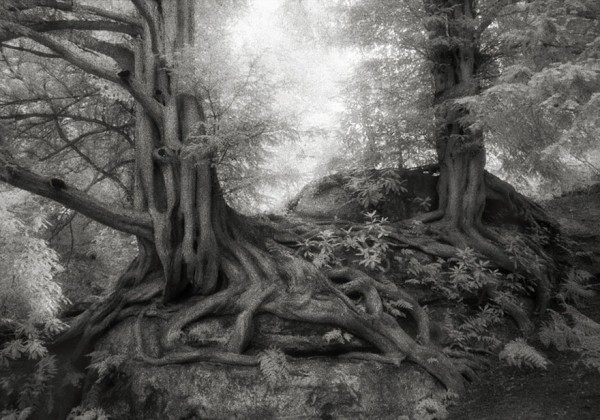 The Yews of Wakehurst are a spectacular sight indeed, with their location atop the sloping cliff and their intricate, protruding roots, which are said to be a result of weathering many winters on the cliff. 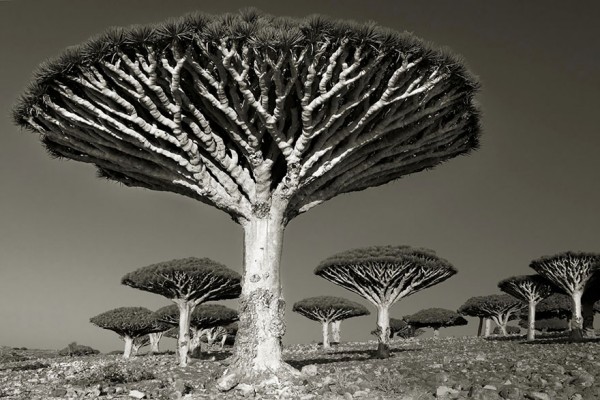 In Diksom Forest, as defined by Moon, dragon trees line the field. It doesn’t get more courageous than that! These trees were highly prized during ancient times for their red sap surprise, hence their name. 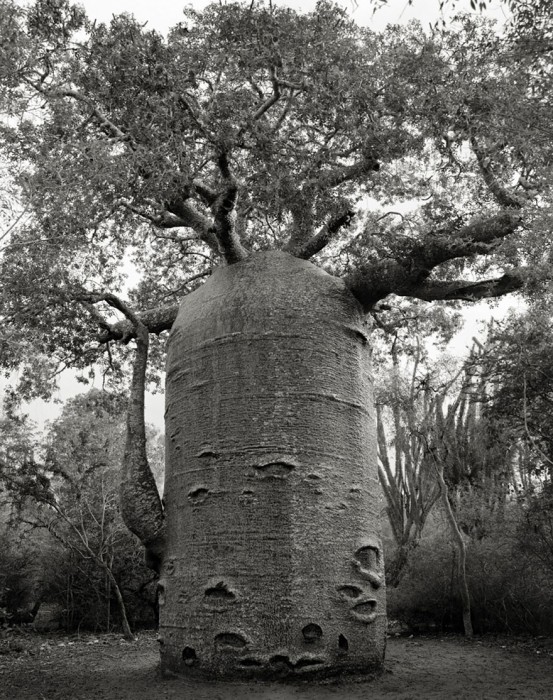 At 1,000 years old, this ancient beauty makes you wish you could look this good in your latter age. The teapot baobab’s thick, fire-resistant trunks provide a great source of moisture in the drought season, reminding us that true beauty is skin deep. The baobab’s trunk expands 25m round. Some trunks are so huge, that people can actually live in them! These trees can only be found in the Madagascar region. This particular plant, called the Ifaty Teapot, can be found at the Reniala Nature Preserve. And though its flowers only last for 24 hours, they can be viewed forever on the Madagascan 100 Frank bank note. 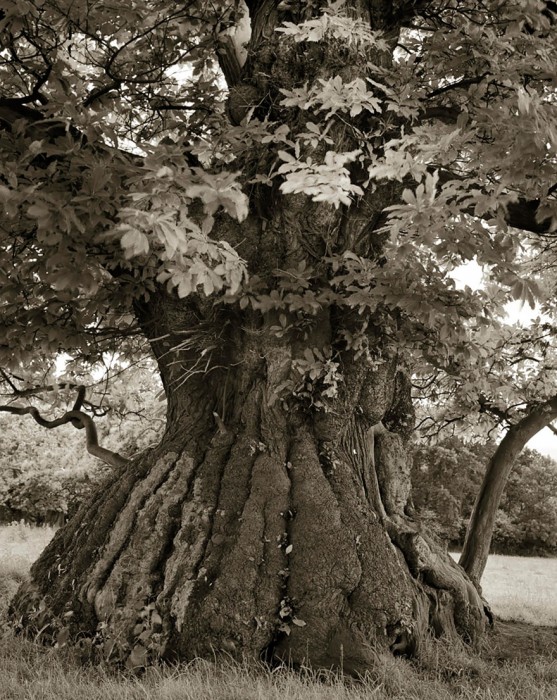 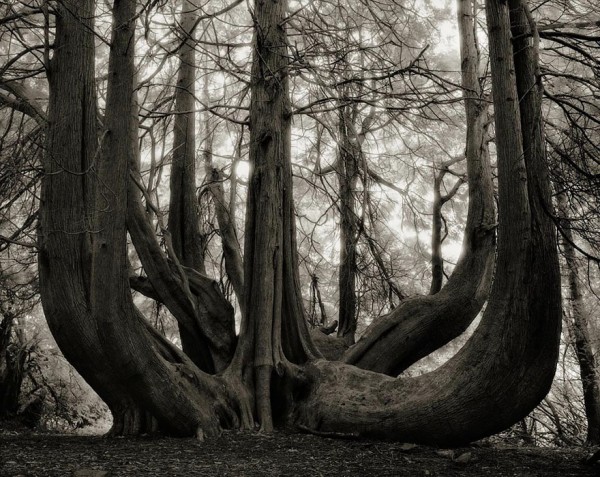 Enamored with greatness? Take a journey to Llandeilo, Wales to bask in the glory of The Great Western Red Cedar of Gelli Aur in all its splendor. This magnificent, multi-trunk tree is believed to have been planted around 1863 and still stands strong to this day. 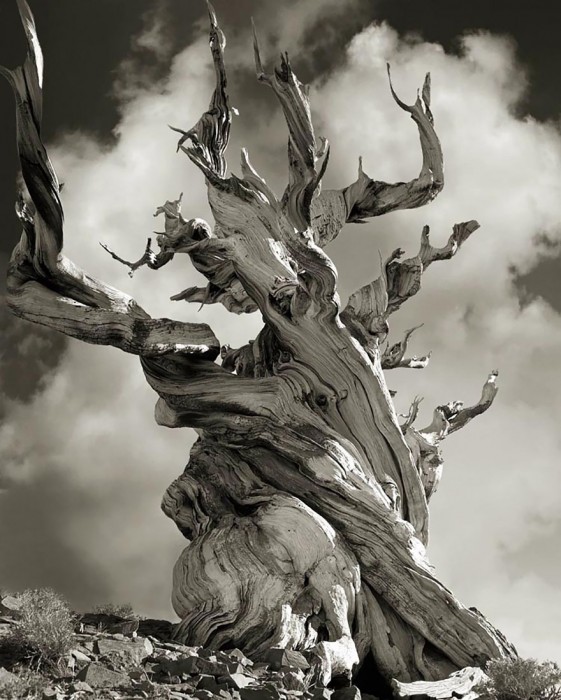 Halt! Who goes there?! This specimen, which resembles a guardian itself, is heavily guarded by a secret location to protect if from civilization. The Bristlecone Pine Relic is located somewhere in the Forest of Ancients in Inyo National Forest of California, which is a befitting place for such a fascinating relic. At 4800 years old, it was planted around 2800 BC, long before the erection of the Ancient Egyptian Pyramids and the rise of the Ancient Mayan Civilization. This humble little tree grows over 50 feet, however, it takes 700 years to reach just 3 feet! 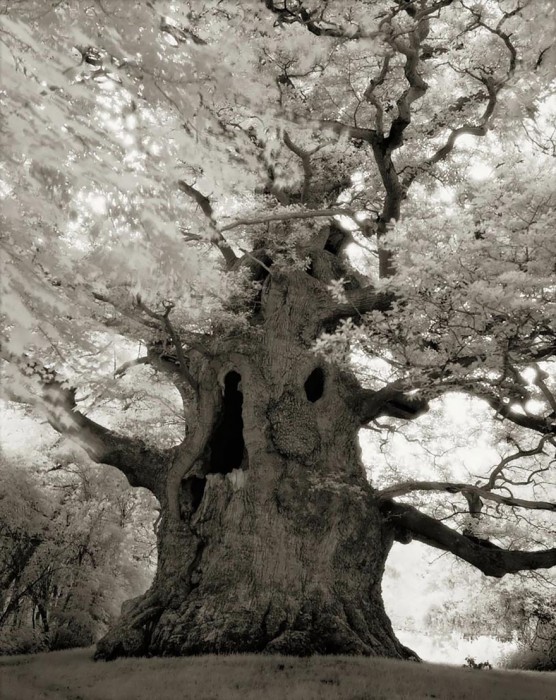 Afternoon tea with the Majesty anyone? Grab your tea and crumpets and relax under this Fredville Oak, so mighty in girth that it is called “Majesty,” and it shall be done. The Majesty, located in Nonington, Britain, is 12.3 meters round with a 9 meter trunk, which makes it the mightiest oak tree in the land! 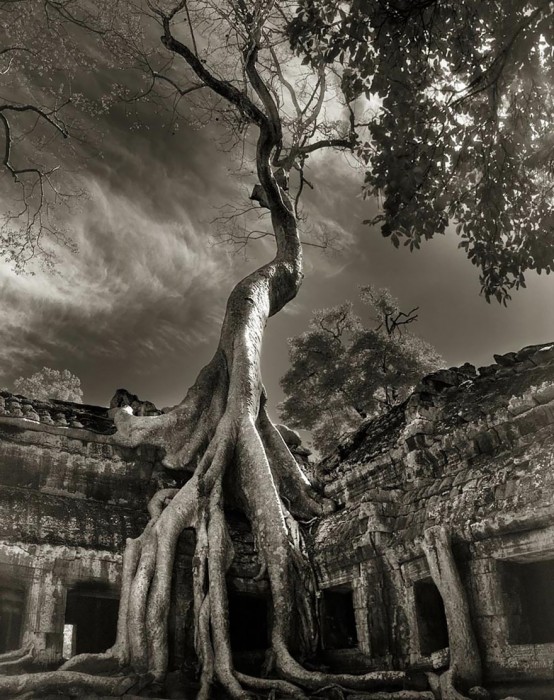 The enormous trunk of the ficus tree is often observed spilling over many of Cambodia’s ancient sacred temples and ruins, which prompts you to wonder if this is some sort of divine sign. 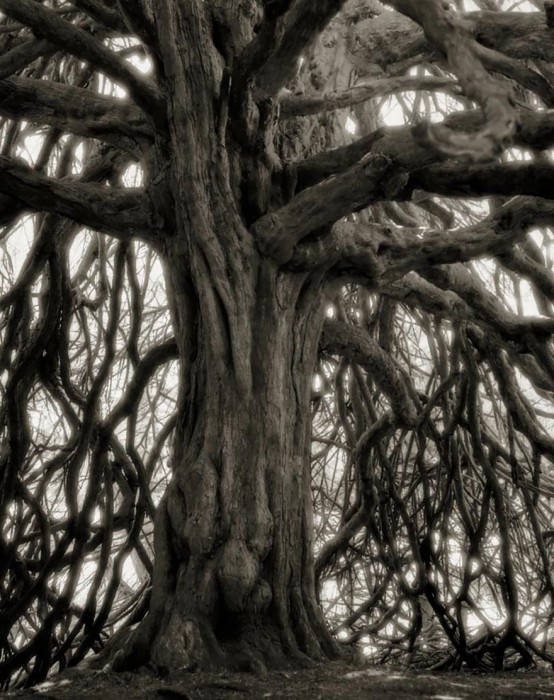 The Whittingehame Yew’s branches beautifully layer down to the ground where they take root, forming a 160 yard cone shaped chamber around the base of the tree, locking you into a “fairytale land” of sort. It maintains a constant temperature throughout the seasons, so it provides shelter all year long. The enchanting Whittingehame Yew is a Scotland Heritage tree and can be observed in all its grandeur on the Whittingehame Estate near the Whittingehame Tower. 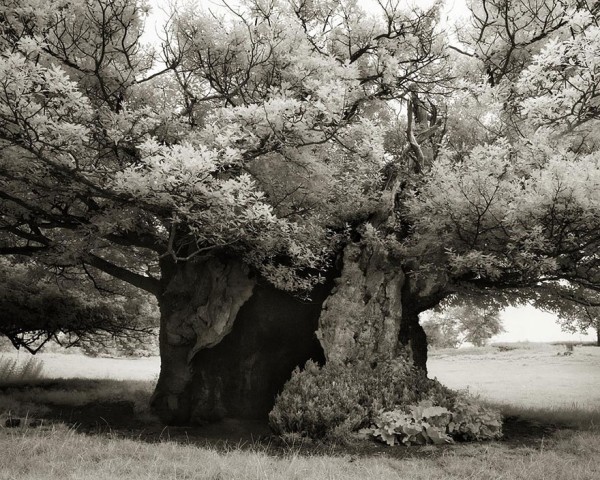 Need a hug? This royal species invokes hugs in its visitors with its massive wide trunk. Legend has it that Queen Elizabeth herself, was known to frequent the tree where she would enjoy delectable refreshments inside the confinements of the trunk. The Queen Elizabeth Oak dates back to the 12th century, and although it was destroyed by a huge rain storm in 1991, the fallen tree still remains in its original location in Greenwich Park, London. 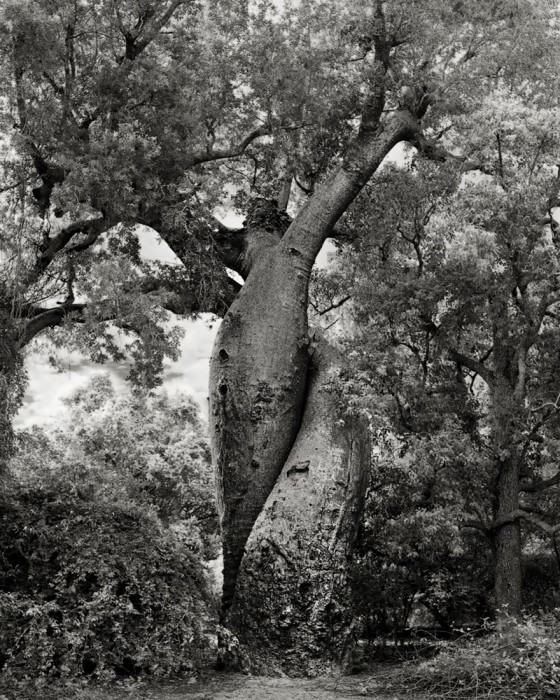 What a look of true lovers in action! This ancient pair, dubbed The Lovers, can be found in Morondava, Madagascar. According to legend, the trees depict the tale of a doomed affair that eventually results in the pair being bound together in everlasting love.