Something very strange and funny happened during a rugby game in Australia. A black cat ran across the field eight minutes after the second half started; all the spectators were impressed because this little cat was running extremely fast down the right side of the field and into the in-goal area.

The pictures of the cat running across the field have been photoshopped in hilarious ways. Whether it is dressed as Superman or floating in outer space, these pictures are way too funny! 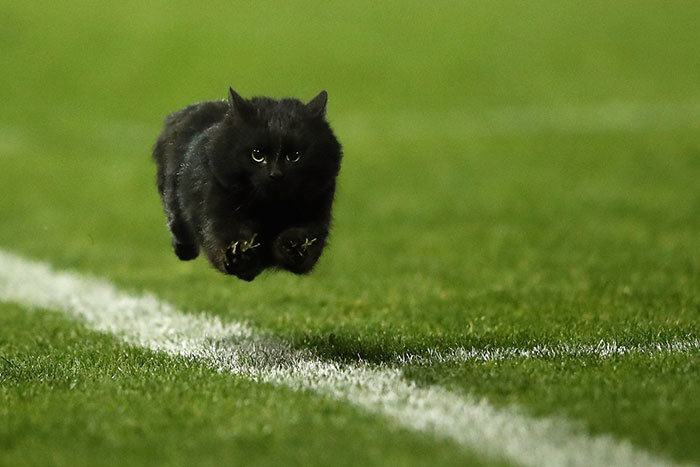 This is one of the original photos taken of the cat while he was running across the field. It looks as if he were floating in the air because he was running extremely fast. He was the highlight of the day during this rugby league match. If you want to see how he was photoshopped check out the next picture! 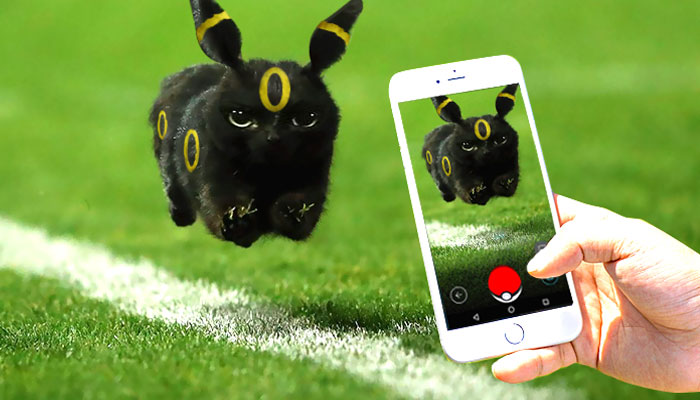 We all know how popular Pokémon Go has become in the past few months. “Umbreon” is the name of the Pokémon creature that sort of looks like a black cat and in this case, the photo editing is done quite well. Our little furry friend looks like he is about to be caught! 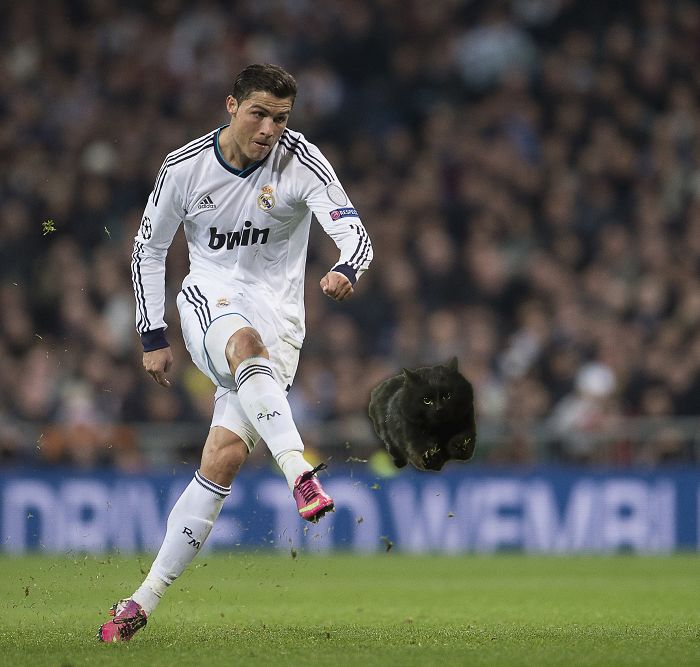 Soccer might not be a very popular sport in the US. But those who are huge fans of soccer know that Cristiano Ronaldo is one of the most skilled soccer players in the world. In this picture, it looks as if he were kicking the black cat instead of the ball, it’s hilarious! 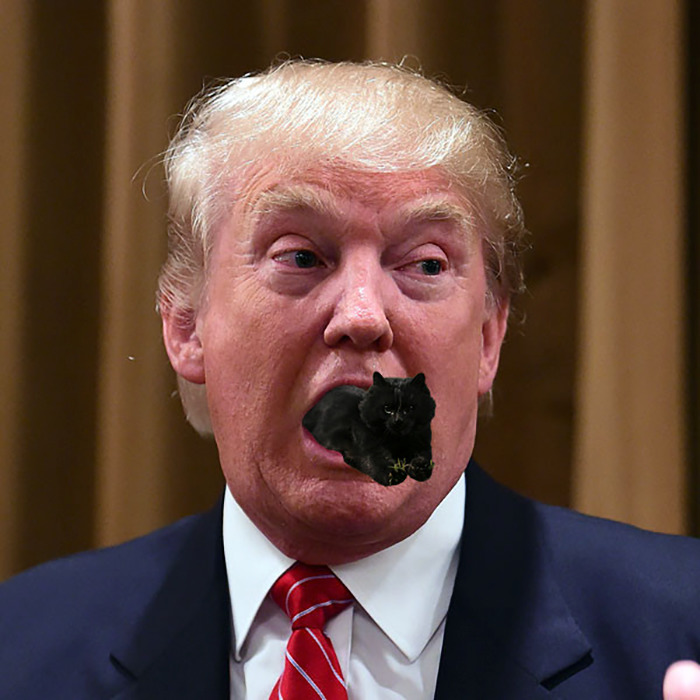 Donald Trump has become one of the most controversial presidential candidates that the US has ever had. There are many people who support him, but others think that he only speaks nonsense. The person who photoshopped this is definitely not a Trump supporter.

Out for a walk 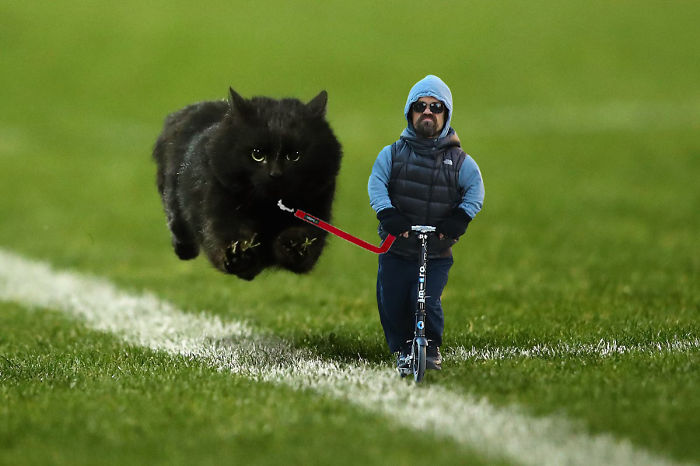 This one is really funny! The poor innocent guy who was photoshopped into the picture seems a bit mad because he had to walk the huge cat. If it weren’t for the leash, we would probably think that he is being chased by the cat. 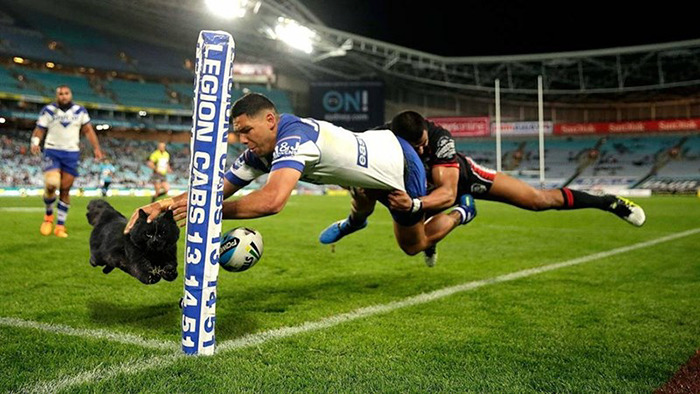 Oh hey there! This black cat really likes running on rugby fields. This time, it looks like the rugby player is petting the cat instead of catching the ball. Whoever edited this picture is really good at it because it looks pretty real. 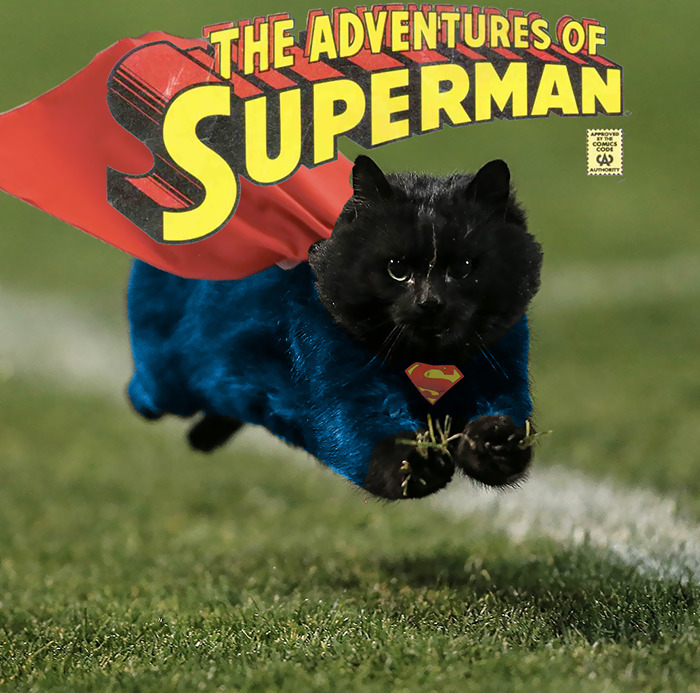 This picture is so adorable; our furry friend looks like he’s ready to protect the city. If this were a movie poster, it would probably be the most popular movie of the year. Who wouldn’t want to watch The Adventures of Supercat? 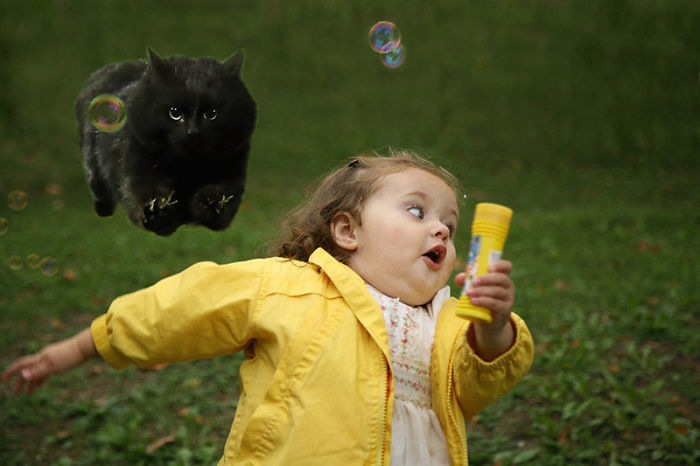 Cats have all sorts of personalities and everyone knows that they are great hunters. This little girl looks really scared so she’s running as fast as she can to escape from his claws, but we just can’t stop laughing! These photoshopped pictures are too good.

Out for a ride 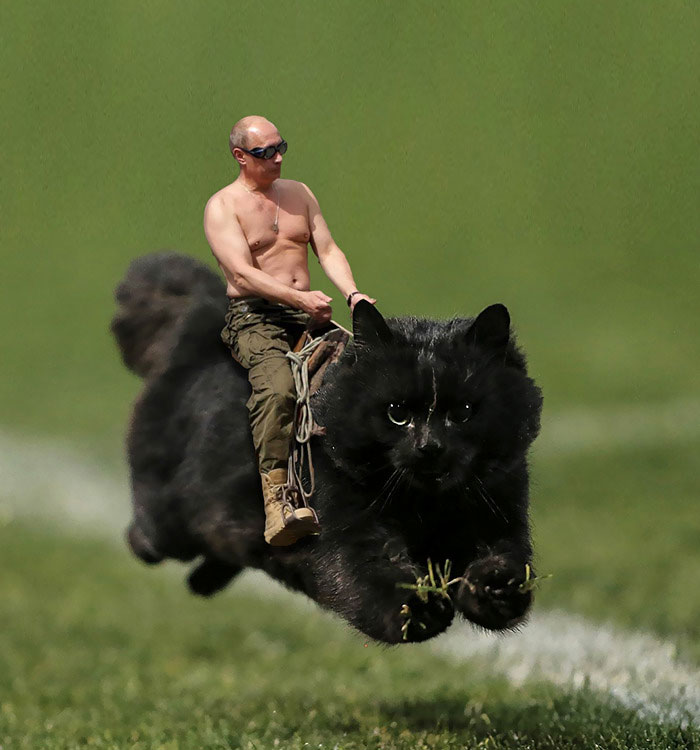 It might be impossible to ride a cat, but it seems like they would be great for hunting. The guy in the picture looks like Vladimir Putin, Russia’s current president! Don’t you think he looks pretty relaxed riding that cat? 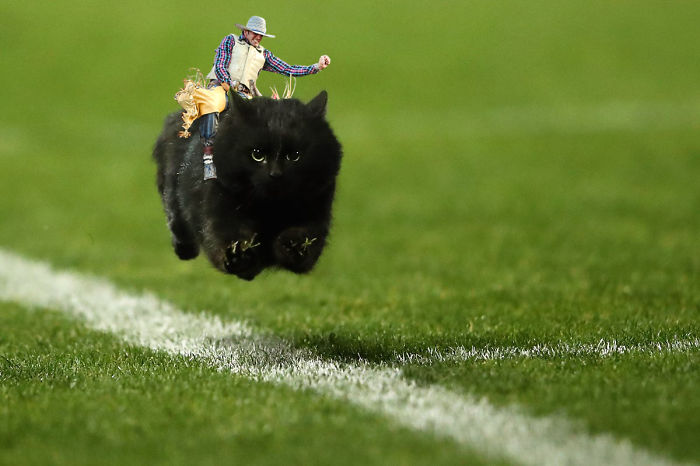 When you think of western riding, you think of people riding horses, but this is not the case. This cowboy seems like he’s having a great time riding the cat, even though it must have been hard to saddle him up. 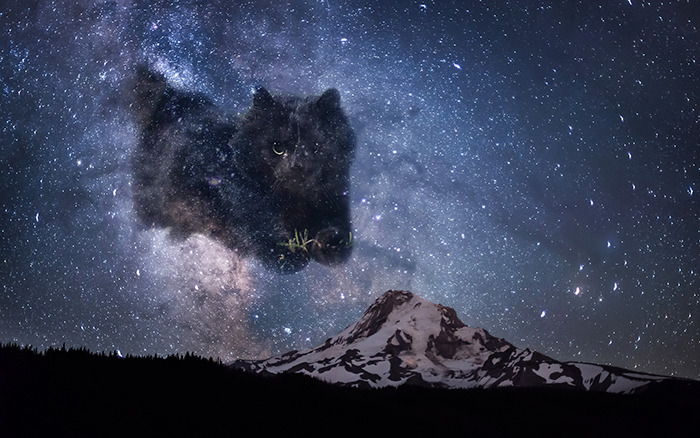 In this picture, it seems as if the cat were mimicking “The Lion King” when little Simba sees his dad in the sky. But if it were Halloween night, watching that cat in the sky would be pretty creepy. 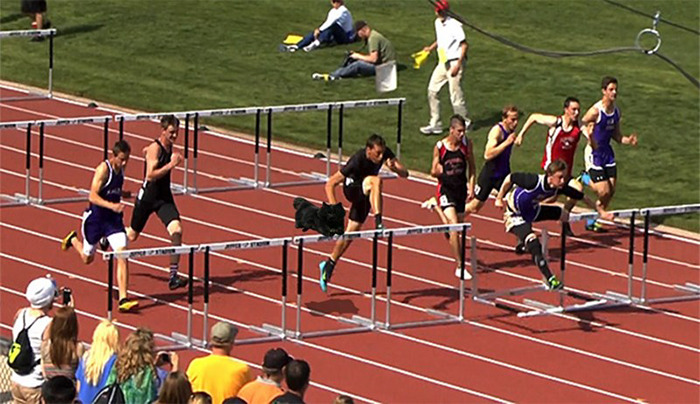 Cats can jump really high; did you know that they can jump up to five times their own height in just one leap? Well, they are pretty skilled animals indeed. This black cat should definitely participate in the Olympics. 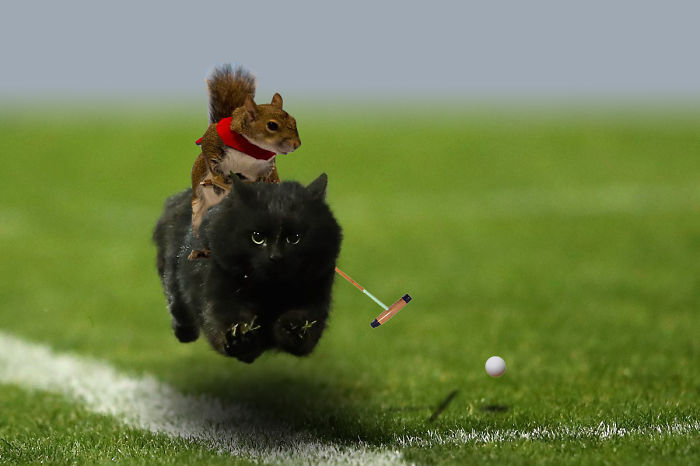 This picture is way too funny! Can you imagine squirrels riding cats in a polo match? Well, it would be really entertaining to watch. Polo originated in Southern or Central Asia, many Persian emperors enjoyed playing polo 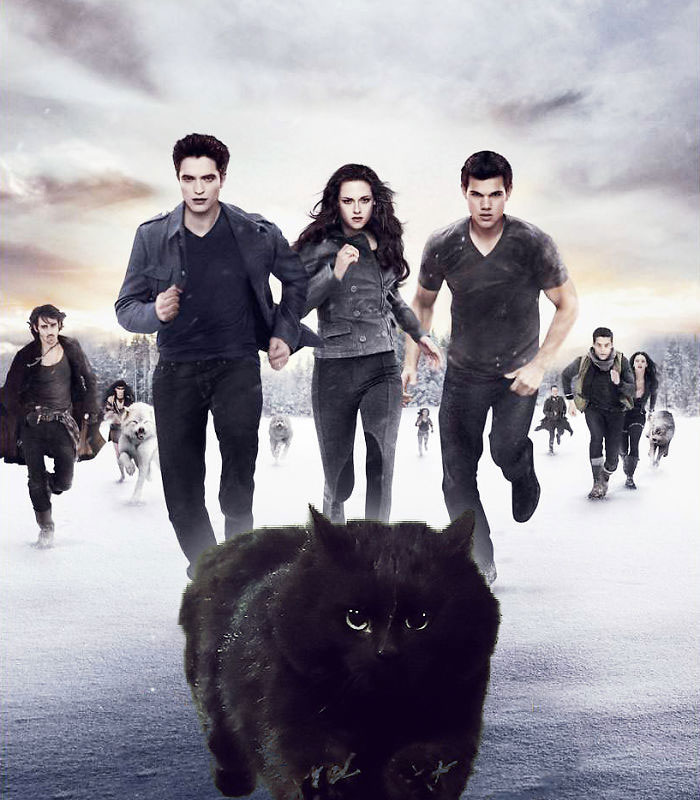 The Twilight Saga is a series of five films based on the novels by Stephanie Meyer. Most of the teenagers from all over the world went crazy over these movies which are fantasy films so it could make perfect sense to use cats instead of wolves. 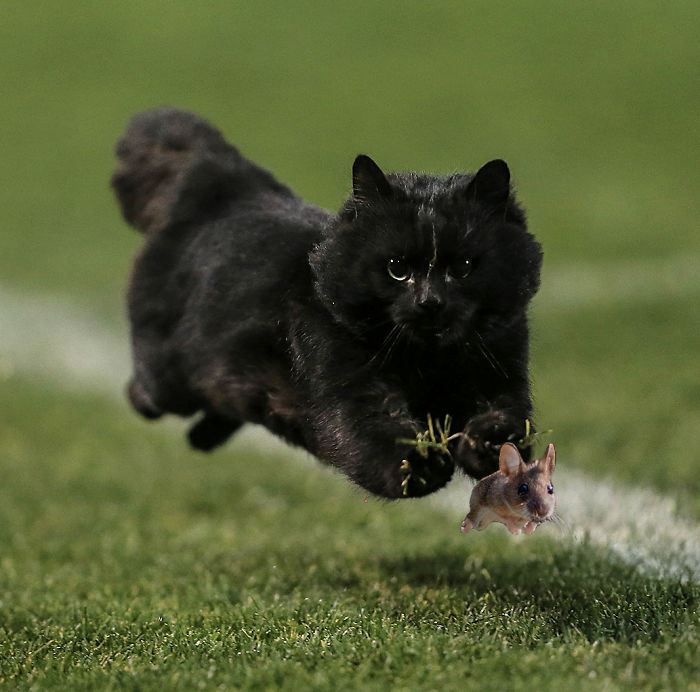 Tom and Jerry is an animated series of short films that centers in the rivalry between a cat and a mouse. The first thing we thought when we looked at this picture was “Hey that’s Tom and Jerry!” Let’s just hope the little mouse didn’t get caught.

This cat is everywhere 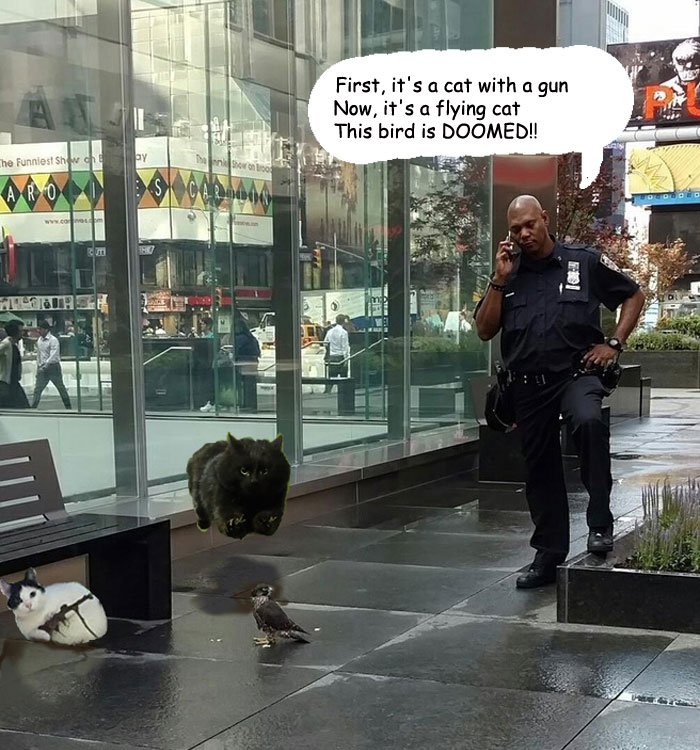 The text on this picture pretty much says it all. The cat looks like he is about to catch that poor bird. The same picture has been used many times on different memes, but this has got to be the funniest one!

Back to the future 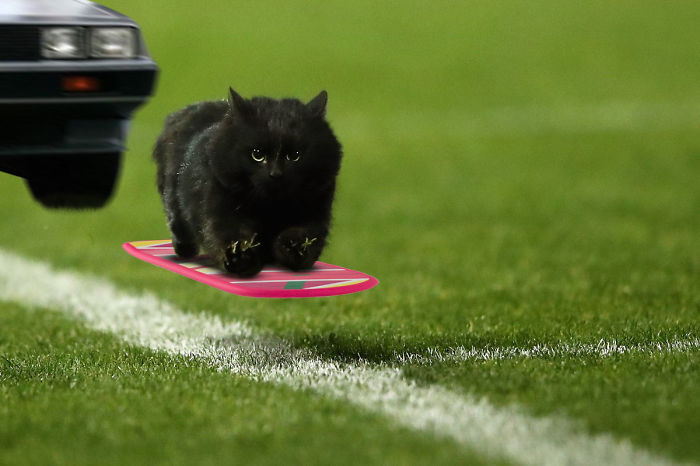 The movie "Back to the Future" starring Michael J. Fox and Christopher Lloyd was released in 1985 and it became a huge success grossing over $389 million worldwide. It might be an old movie, but we love it!

The knight and the cat 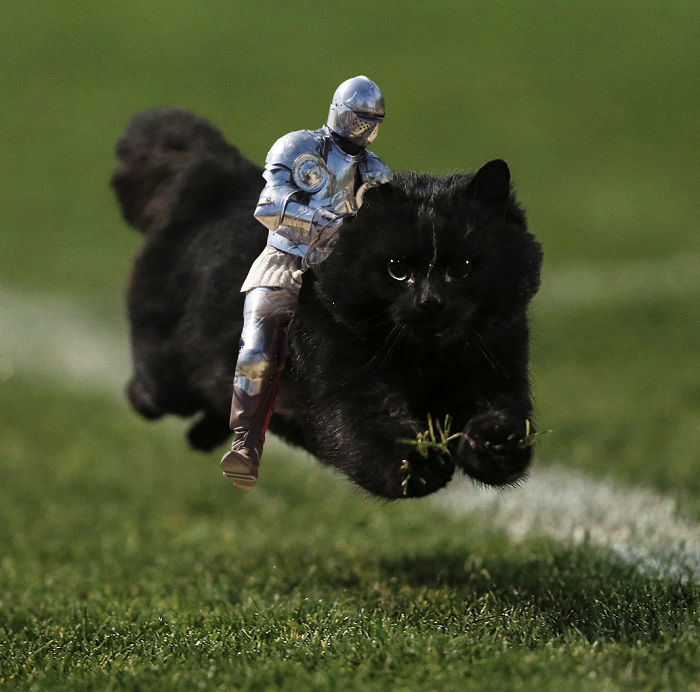 Many social media users suggested that the cat was the replacement for Josh Mansour, a winger of the Panthers team even though they lost the game. This majestic feline was definitely the best entertainment.

What happened to him? 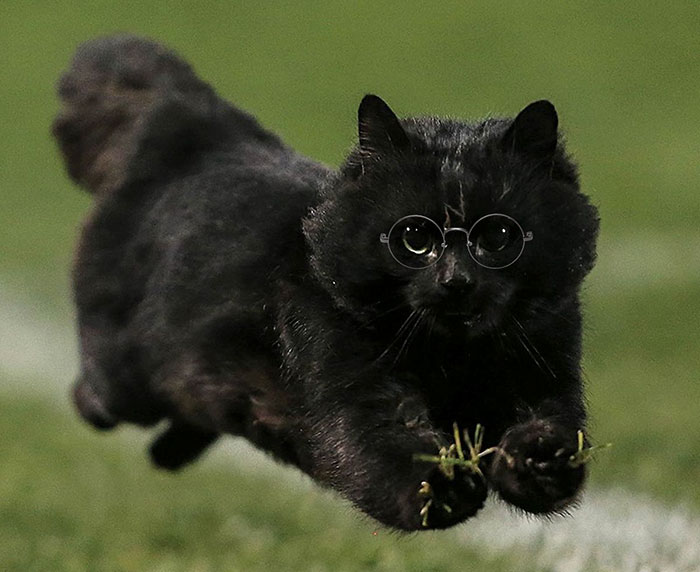 There is not much information about what happened to this black cat, but he definitely enjoyed his fifteen minutes of fame. In this picture, the cat is pretending to be Harry Potter, the most popular magician in the film industry. 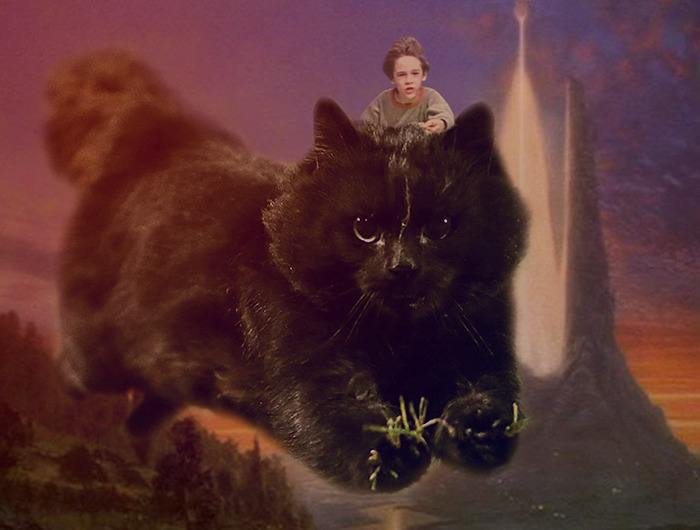 “The Never Ending Story” is an epic fantasy film that was based on the novel by Michael Ende. The boy in the story rides a dragon but in this photo, he’s riding the black cat! We hope you enjoyed these photoshopped pictures of the most popular cat on the internet.