The Most Curious Facts about the Dinosaurs - Mundo EN
Animals

The Most Curious Facts about the Dinosaurs

The dinosaurs are some of the biggest mysteries of the world, and it’s just that we all want to know about what happened to them or how there where and lived, that’s why we are about to reveal some crazy and curious facts about these animals that once ruled the world.

There many questions without answers, but today you will learn a little bit more about them.

65 million years ago something amazing happened 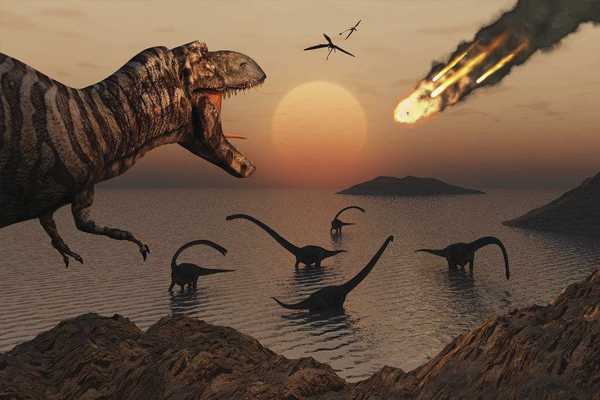 Pinterest.
It is really terrifying thinking about how the world was long time ago, but the dinosaurs existed 65 million years ago and disappear the earth too. According to some studies, an asteroid hit the earth causing a big disaster ending with all possible life. ¿Do you want to know in which country the asteroid collided? We are about to tell you, just keep reading...

All the dinosaurs got extinct, except for one specie 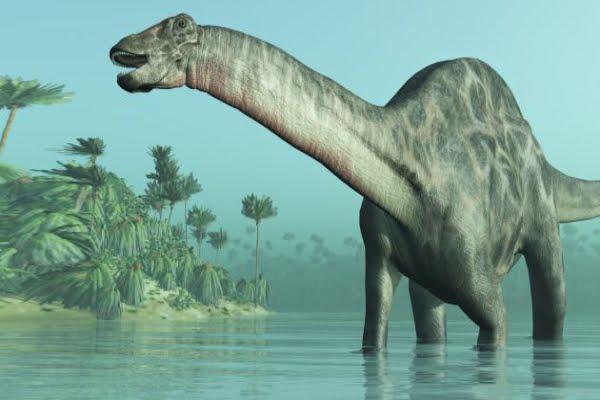 Pinterest.
All the history books tell us that the dinosaurs disappear for completely in a terrible catastrophe; although, there are some proves that one group of them found the way to survive, and we are talking about the Theropods. Many fossils of the Theropods have been found along the human history in many countries in North America, Asia, Africa and Oceania, even though the more concentration of proves are found in North America. There are some theories that the Theropods evolved on a bird specie... ¿Can you believe it? Keep reading... 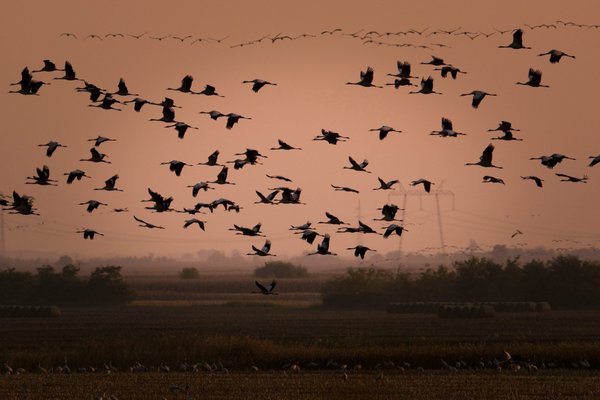 Pinterest.
It is believed that the evolution of the birds, the Theropods, started in the last phase of the Jurassic period. There is nothing sure about how they survived and then evolved into birds that we see now in the actuality and now there are about 10.000 different bird species.

¿What was the smallest dinosaur? 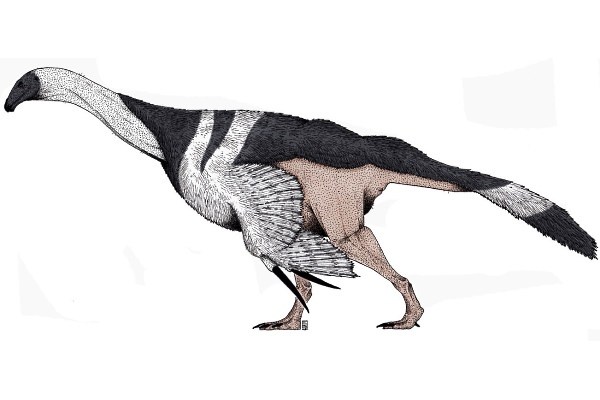 Pinterest.
All the dinosaurs were extremely giant, reason why we are glad they don’t exist in the actuality. One of biggest question we all have had once is, among many giants, ¿which was the smallest specie?. Many studies said that the Compsognathus was the smallest specie, and they lived in Europe and they had the size of a chicken. Okay, lets continue...

Pangea: all the continents were once a big country 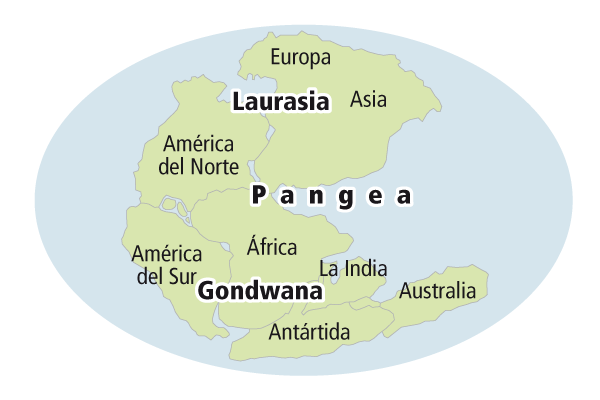 Pinterest
The earth has suffered many several changes when the asteroid hit the ground, and that’s why all the continents moved separately over the years. This process is mostly known as the theory of plate tectonics, and when the dinosaurs still existed all the continents were united and it was known as Pangea.

¿Did you know the dinosaurs danced? 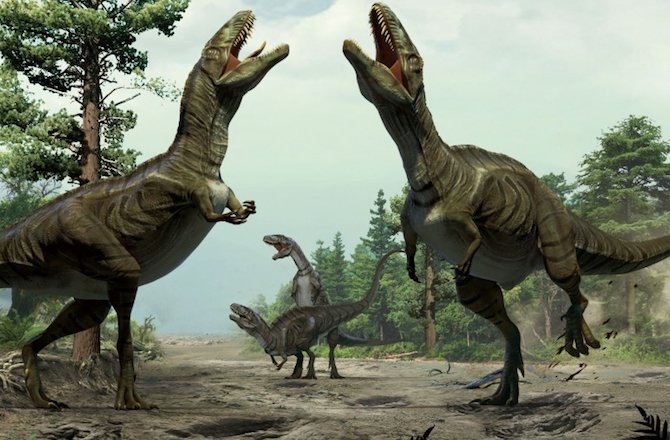 Pinterest.
There isn't anything cuter than seeing any living specie dancing all over the place. Many paleontologists have confirmed that the dinosaurs had a type of dance and they move their tale to seduce their couple. The more they danced the more probability they had to find a mate.

They want to recreate a dinosaur from a chicken 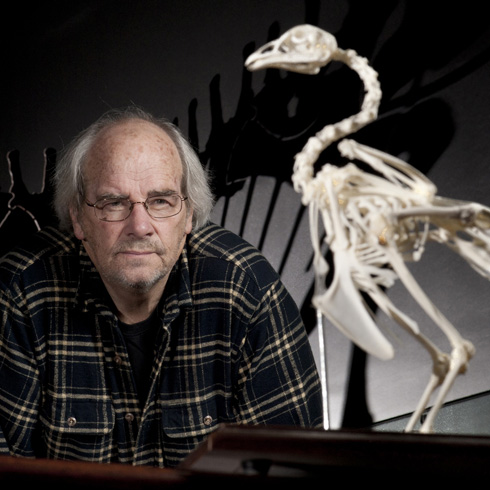 Pinterest.
A paleontologist wants to recreate a dinosaur from a chicken... Jack Horner had two dreams when he was a kid: become a paleontologist and have a dinosaur as a pet. And even though it sounds crazy, he is completely decided, and wants his dream to become a reality.

The first fossils where found in China 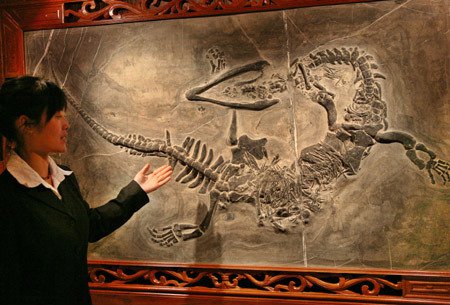 Pinterest.
The first fossils where found in China and people thought that their discovery was about giant dragons. The good thing is that some research showed that it was about something more real and serious. 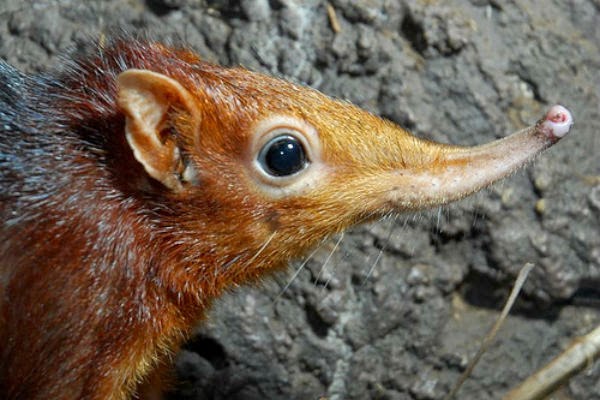 The Torosaurus has the biggest skul in the world 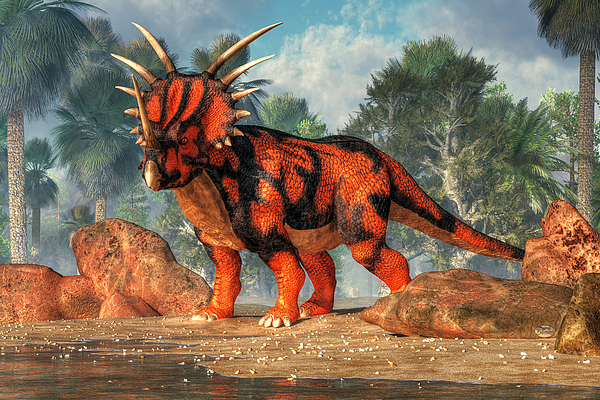 Pinterest.
The Torosaurus had the biggest skull ever known, it was 2,6 m long. Is one of the most famous creature, and we see them all the time in cartoons and movies.  Okay, let’s finally see where the asteroid collided.

It's believed that there is not difference between male and female 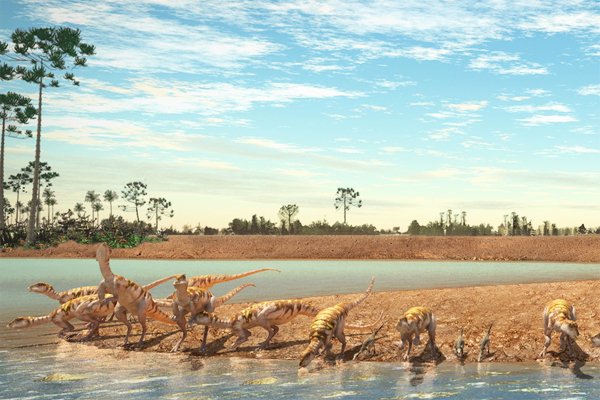 Pinterest.
Even though is not about all the dinosaur species, some of them had gender dimorphism, the condition where the two sexes of the same species exhibit different characteristics beyond the differences in their sexual organs. The studies continue figuring out if there was a real difference between both sexes.

¿where did the asteroid collided 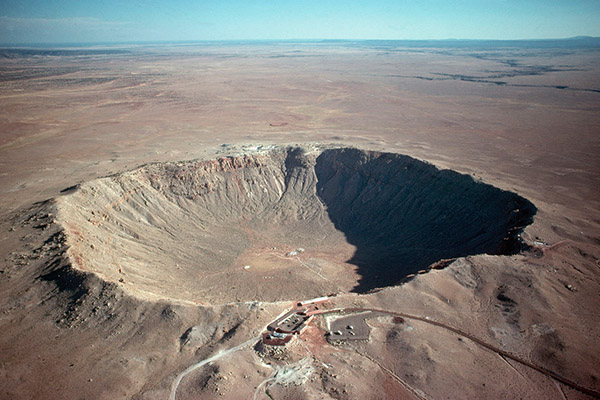 Pinterest.
The impact of the asteroid was really serious, after it collided the world turn dark for a couple of months, because of Atmospheric Dust and Acid Rain. The asteroid collided in Yucatan, Mexico.

¿why does the T Rex had short arms? 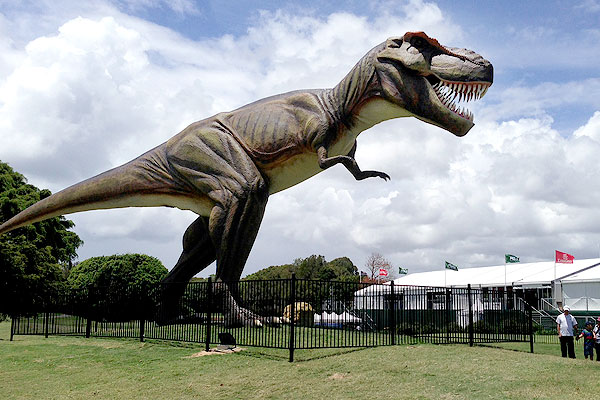 Pinterest.
Everybody makes fun of the short arms of the T Rex, but the science says that they used they short arms to hold their prey.

A complete dinosaur was stolen in Australia 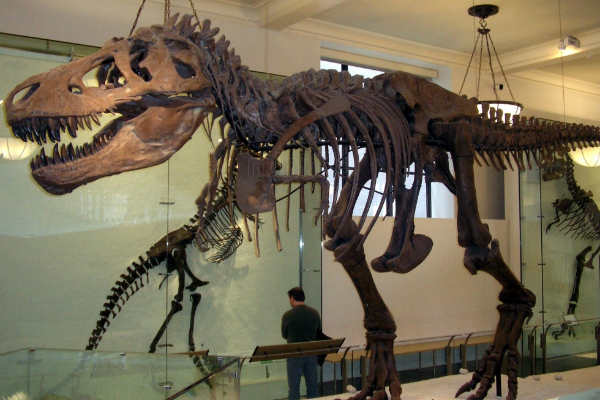 Pinterest
It happened in the National Museum of Australia, a complete dinosaur was stolen a few years ago. The curious thing is how they took it out, because each part was really heavy... weird isn't it. ¿Did you know that a British girl discovered a dinosaur specie? We are about to tell you about it.

The girl that discovered a new specie 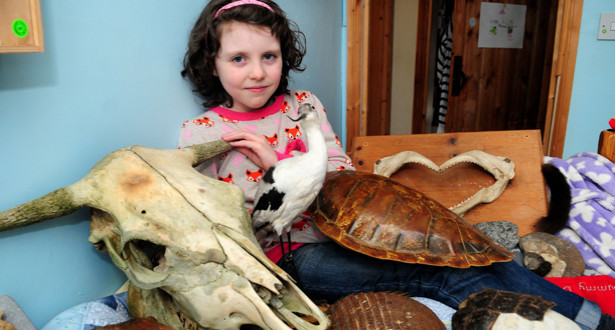 Pinterest.
A four year old British girl found a fossil in 2009 while she was walking in the beach of Isle of Wight. She didn't know she discovered a new dinosaur specie and her parents donated it to the Natural History Museum in London. 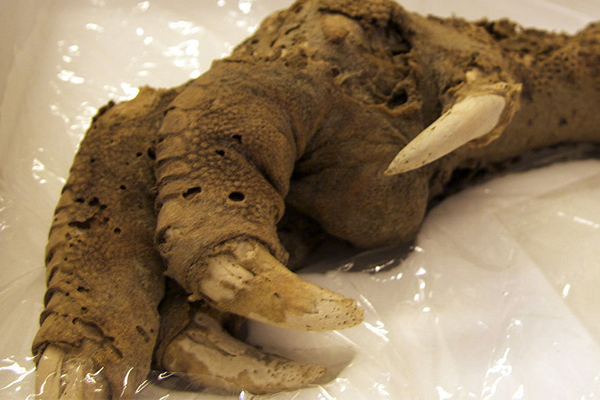 Pinterest.
There have been many interesting discoveries; this one is known as one of the best discoveries ever made. It's about Lesser Megalapteryx or Upland Moa, where there are many well preserved rests.

Some say that the Bible mentions dinosaurs. 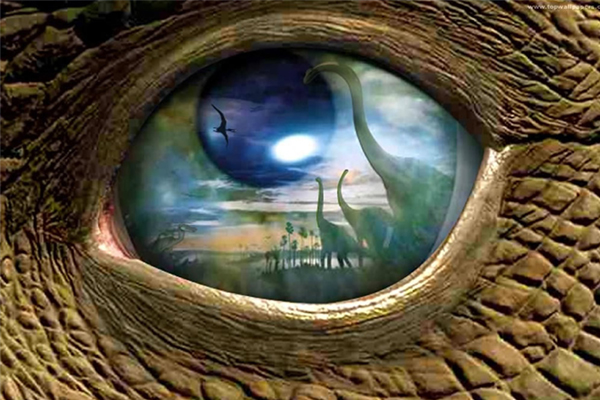 Pinterest.
Some say that between Genesis 1:1 and Genesis 1:2 they are mention. After the earth was created and everything was perfect, except it was completely empty, and maybe that's when the dinosaurs got extinct. 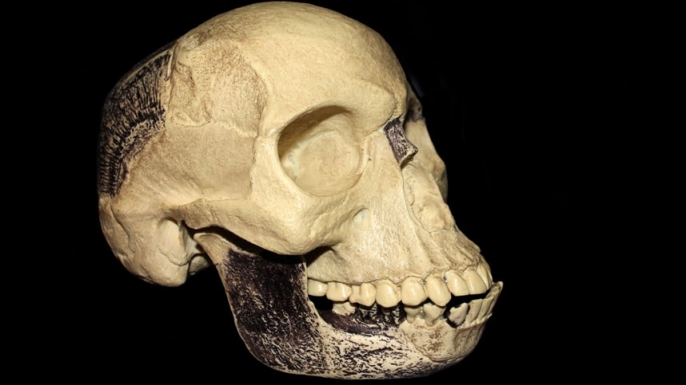 Pinterest.
The Piltdown Man was a paleoanthropological hoax in which bone fragments were presented as the fossils remains of a previously unknown early human. In 1912 the rest of this skull was found in Sussex, England, but it was a total fraud...

The tallest dinosaur ever 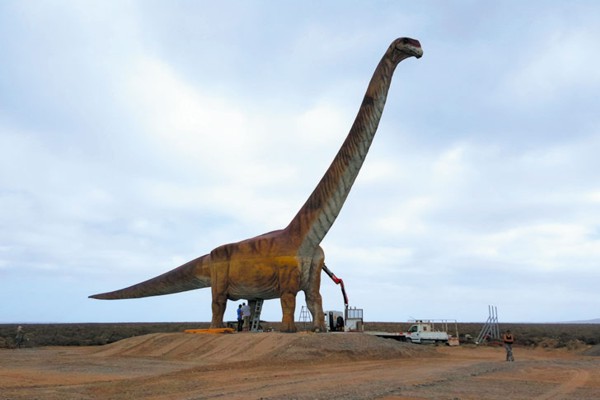 Pinterest.
Although there were all giants, but one specie was the tallest, and there are many candidates fight for that place, and one of the biggest was the Sauropoda, it had a really long neck, as tall as a building. Let's discover a curious fact about the word "dinosaur". 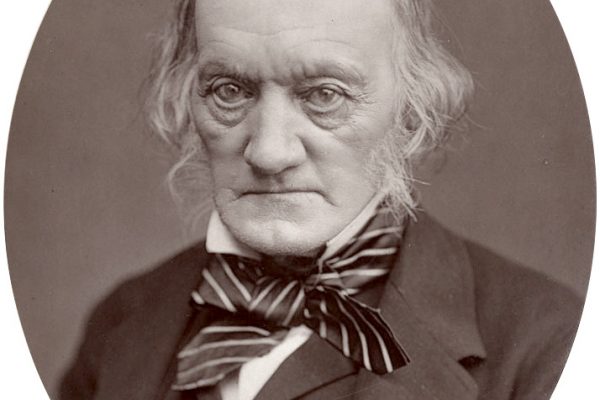 Pinterest.
The term dinosaur was created by Richard Owen, also the one who founded the Natural History Museum in London. When people asked him the meaning of the world, he explained that is a way of saying terrible lizard.
Compartir este artículo
Mundo.com