Meet Aurora, The Fluffy Cat Princess Who Has Become An Internet Sensation

This lovely cat is called Aurora; she was named after the Sleeping Beauty princess and she is undeniably the most beautiful princess cat on the internet. Aurora is a Blue Bicolor Ragdoll with her own Instagram account run by her owner Emily, who lives in Sweden.

“Cats are known for being the rulers of the house and Aurora takes that to the next level. She knows she is beautiful; at least that’s what her manners imply. It’s her way or no way basically,” said Emily in an interview. 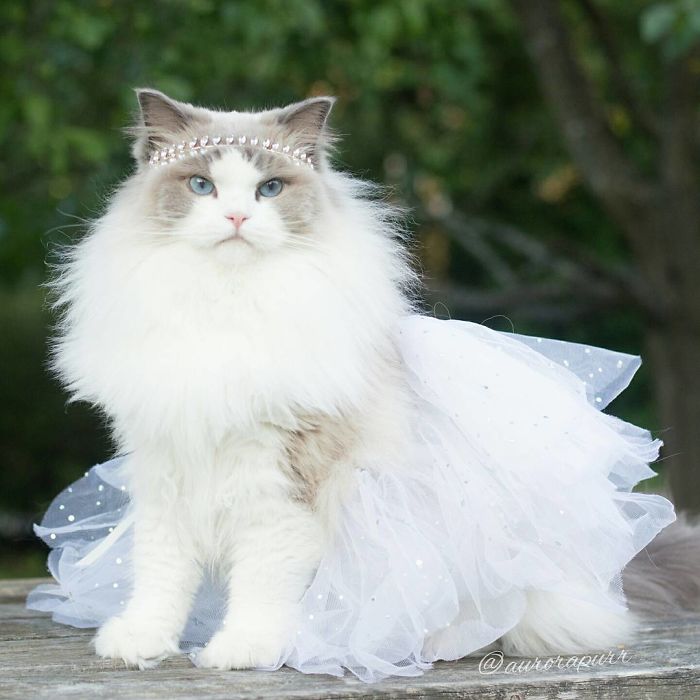 “Aurora is a very smart and loveable kitty. We joke around a lot in our posts about how she sees her humans as servants but in reality, she gives us the same love a dog does, which can be rare for a cat.” says Emily. 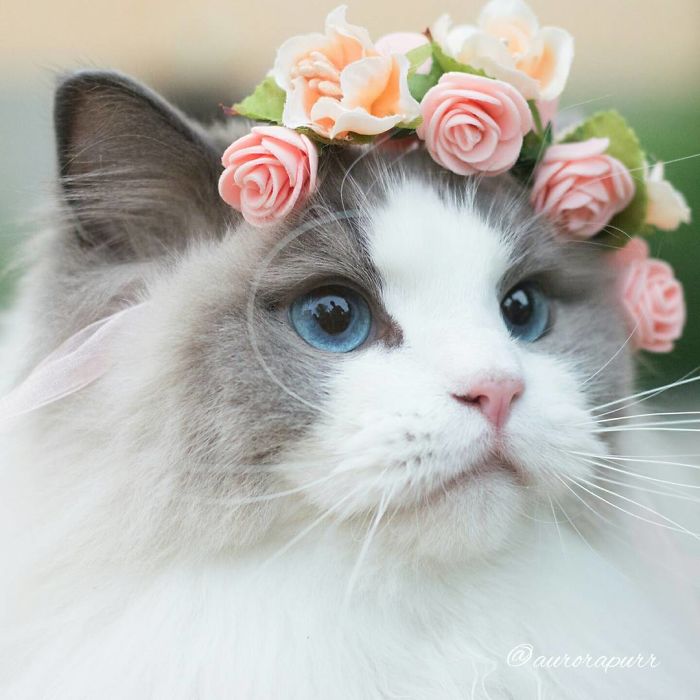 The Ragdoll is a cat breed with blue eyes and a distinct colorpoint coat. It is a large and muscular semi-longhair cat with a soft and silky coat. Developed by American breeder Ann Baker in the 1960's, it is best known for its docile and placid temperament and affectionate nature.

She is so fluffy! 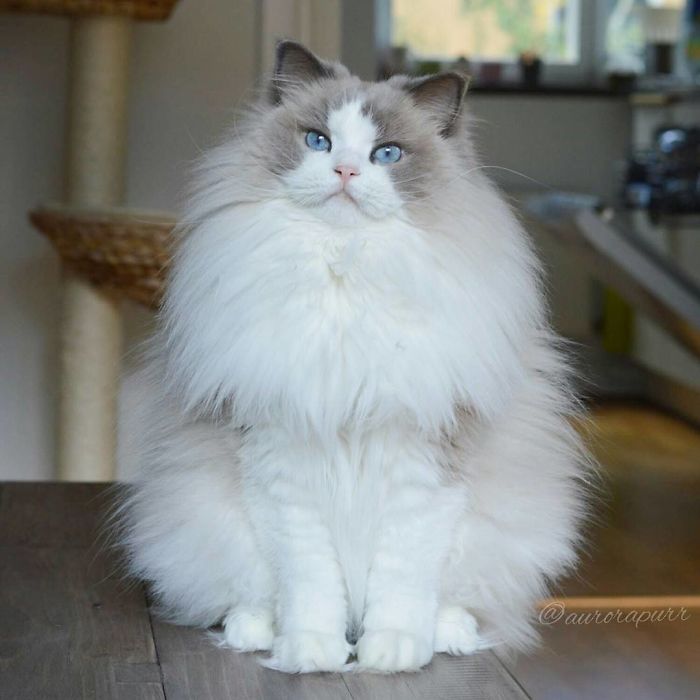 The name "Ragdoll" is derived from the tendency of individuals from the original breeding stock to go limp and relaxed when picked up.

Every princess has beautiful jewelry 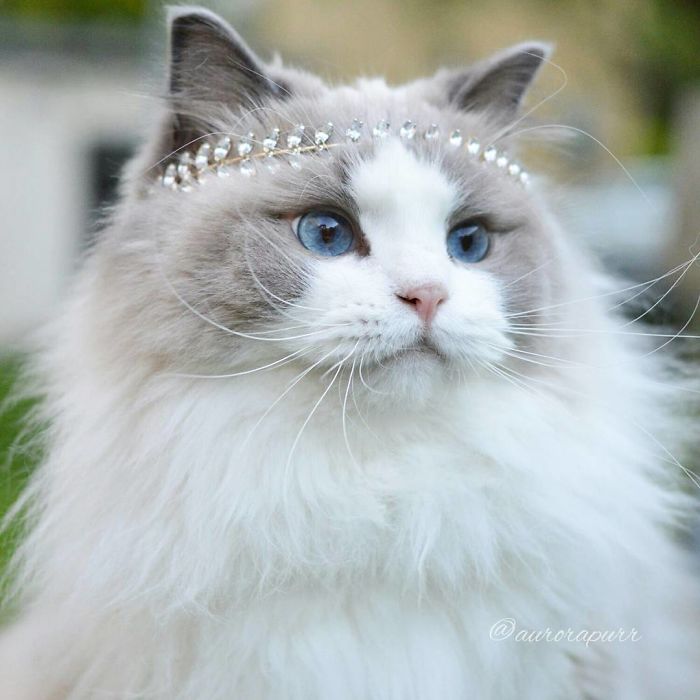 Particularly popular in both the United Kingdom and the breed's native United States, ragdoll cats often are known as "dog-like cats" or "puppy-like cats" due to behaviors such as their tendency to follow people around, their ease at being physically handled, and their relative lack of aggression toward other pets.

She loves her tutu 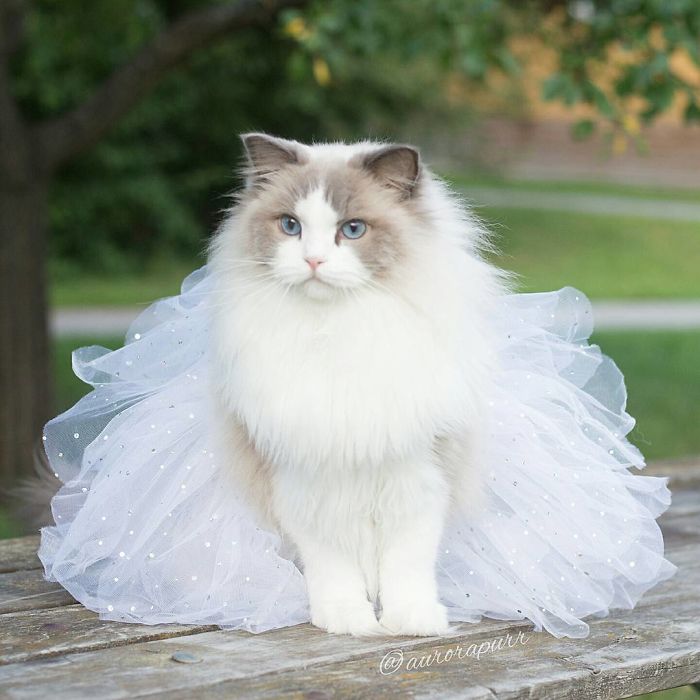 The Ragdoll is marketed by breeders as having a docile, calm and floppy nature with claims that these characteristics have been passed down from the Persian and Birman breeds. 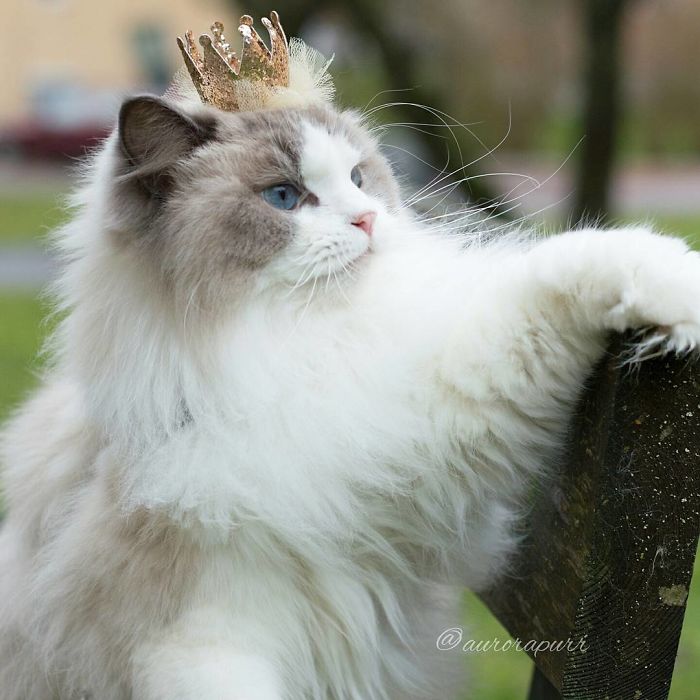 The extreme docility of some individuals has led to the myth that Ragdolls are pain resistant. Some breeders in Britain have tried to breed away from the limpness owing to concerns that extreme docility "might not be in the best interests of the cat".

She knows how to treat herself 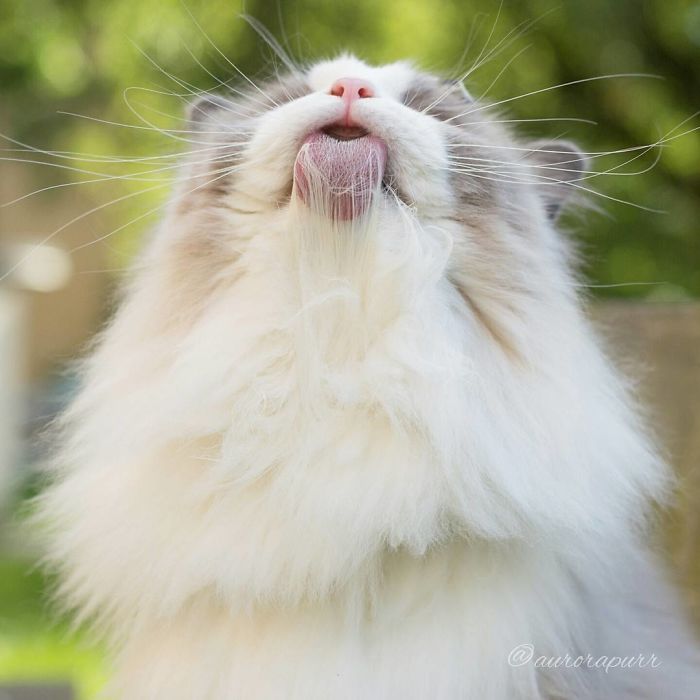 Aurora is indeed a beautiful cat 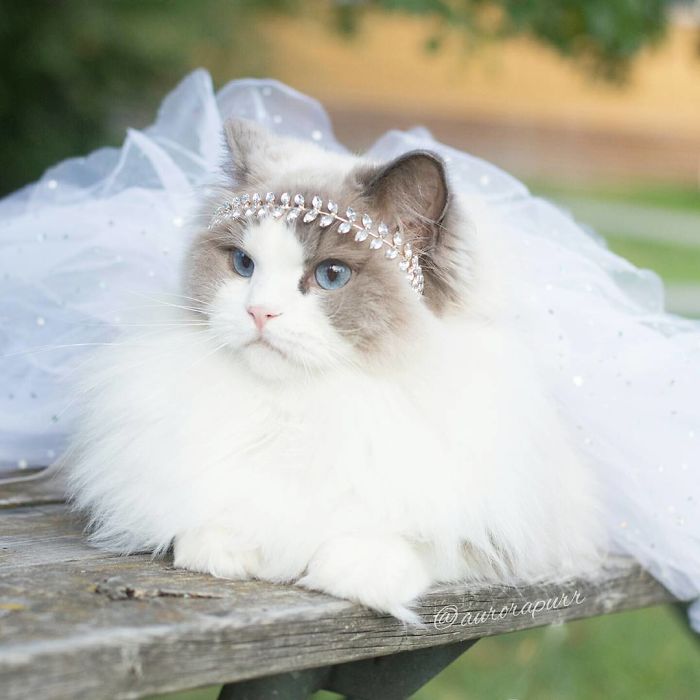 The animals are often known as "puppy cats", "dog-like cats", "cat-dogs", etc., because of their placid nature and affectionate behavior, with the cats often following owners from room to room as well as seeking physical affection akin to certain dog breeds.

She has her own crown 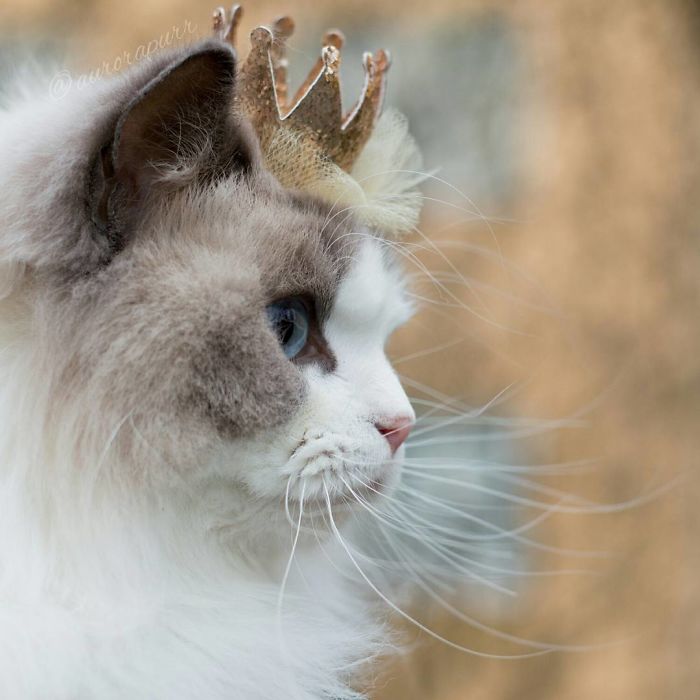 The Ragdoll is one of the largest domesticated cat breeds, with a sturdy body, large frame, and proportionate legs. A fully-grown female weighs from 8 to 15 pounds (3.6 to 6.8 kg).

Aurora knows how to pose 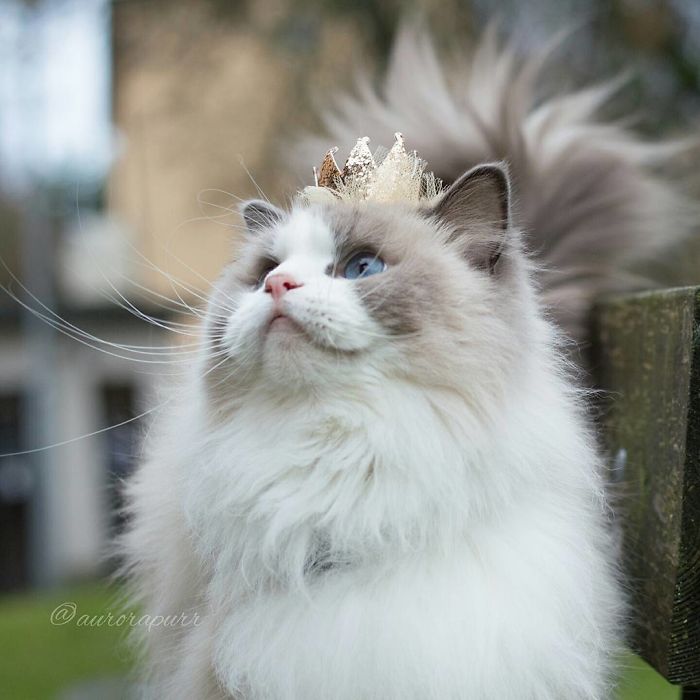 Males are substantially larger, ranging from 12 to 20 pounds (5.4 to 9.1 kg) or more. The genes for point coloration are also responsible for the blue eyes of the Ragdoll. More intense shades of blue are favored in cat shows.

"Just licking the pumpkin spice froth off my nose" 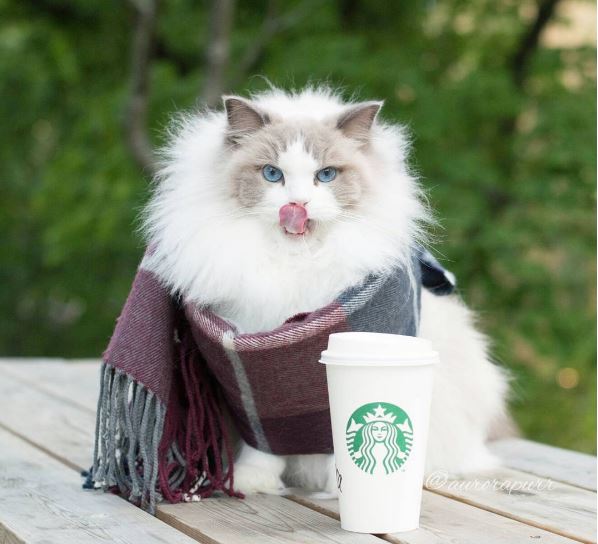 Although the breed has a plush coat, it consists mainly of long guard hairs, while the lack of a dense undercoat results, according to the Cat Fanciers' Association, in "reduced shedding and matting".

"I can stand on two legs for you human, but that's as far as I go for a treat" 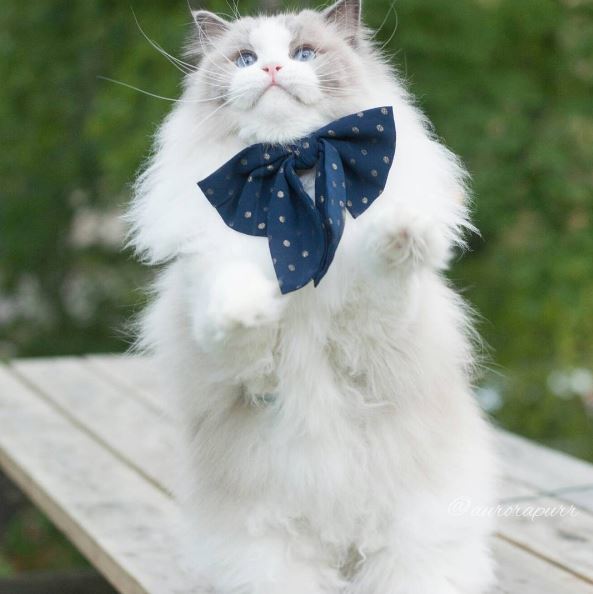 Ragdolls come in 6 different colors: red, seal, chocolate and the corresponding "dilutes", including blue, lilac, and cream. This also includes the tortoiseshell pattern in all colors and the three patterns.

Aurora's face when she sees a dog while she's outside 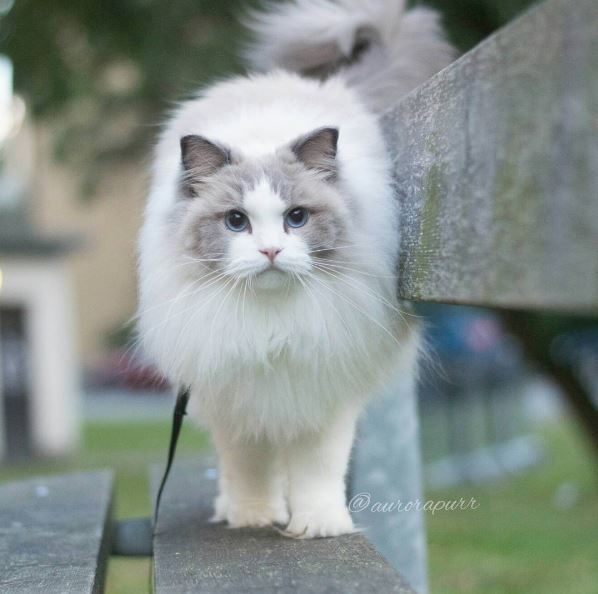 "Traditional" Ragdoll kittens are born white; they have good color at 8–10 weeks and full color and coat at 3–4 years.

Aurora and her cute butterfly friend 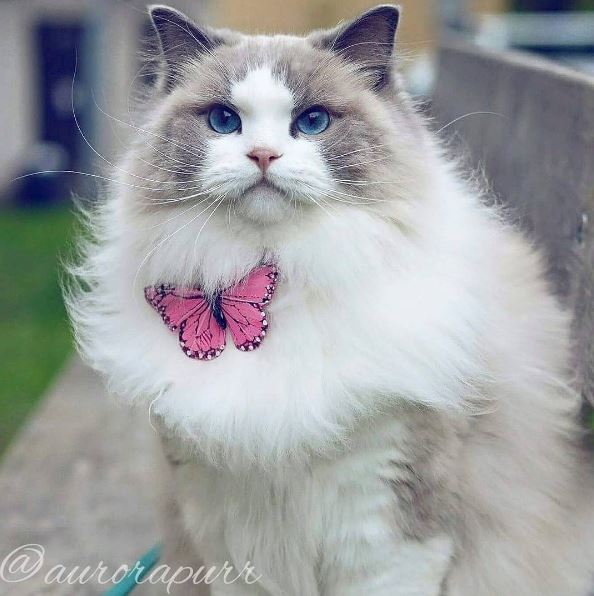 One study utilizing Swedish insurance data showed that of the common cat breeds, the Ragdoll and Siamese have the lowest survival rate, with 63% living to 10 years or more for the Ragdoll and 68% for the Siamese.

"When you're trying very hard to be a vegetarian" 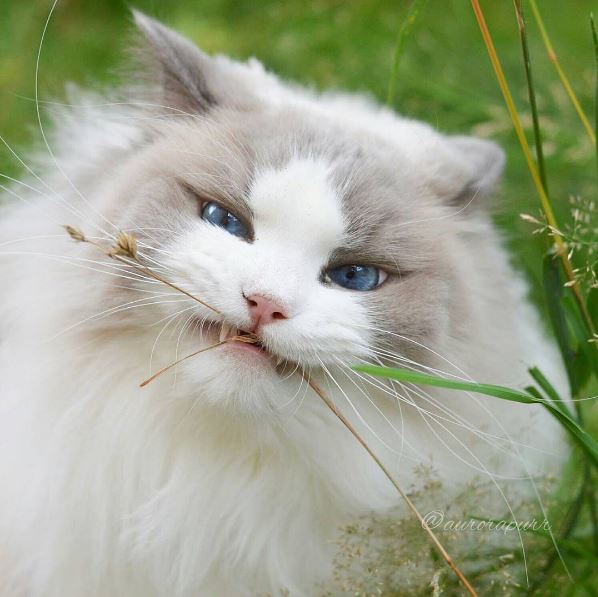 This Swedish study indicates the Ragdoll may have a significantly higher number of cats that die of urinary problems, mainly from kidney/ureter issues, but also partly from lower urinary issues. Whether this is an issue outside of Finland, Sweden, or Denmark is unclear.

"Bathe me all you want, my whiskers will always be on point" 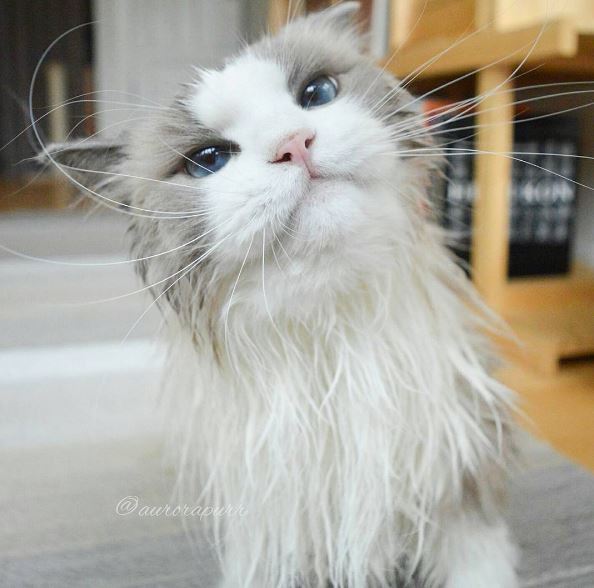 Background inbreeding is severe, around 40%, owing to the very limited number of foundation cats. Around 45% of the genes come from only one founder, Ann Baker.

"Enjoying the view from my throne" 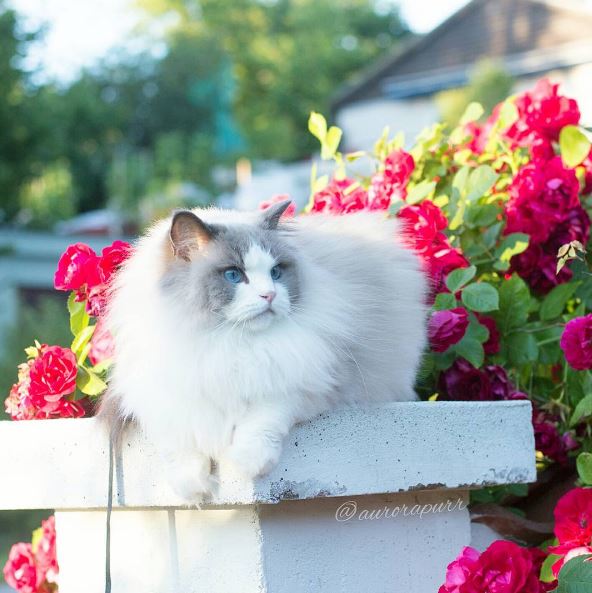 With positive reinforcement, Ragdoll cats learn quickly and can pick up tricks as well as good behaviors such as using a scratching post.

"My tongue is longer than yours!" 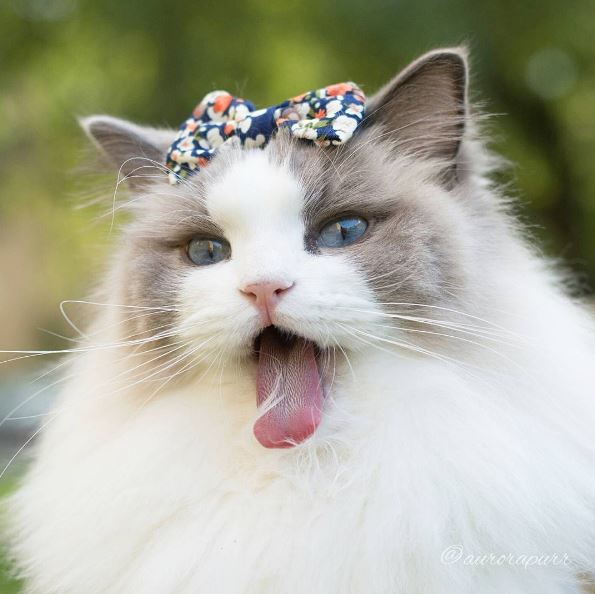 Ragdolls are notable for collapsing into the arms of anyone who holds them, even if they are cradled on their back.

“Proud to live in Sweden” 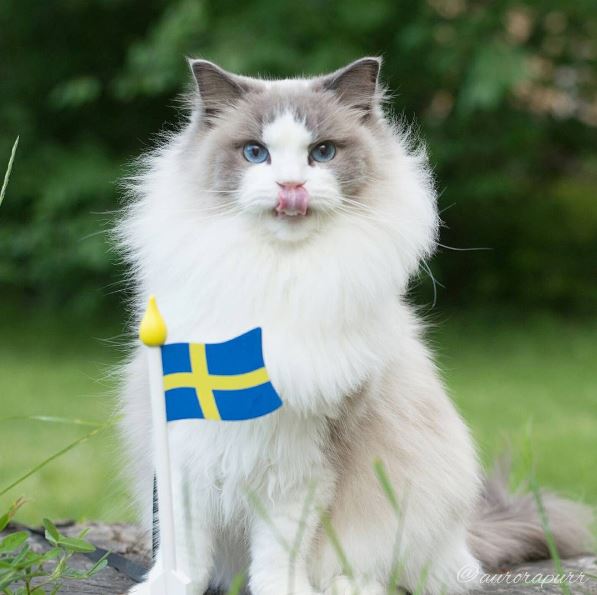 The word most often used to describe them is docile, but that doesn’t mean they are inactive. 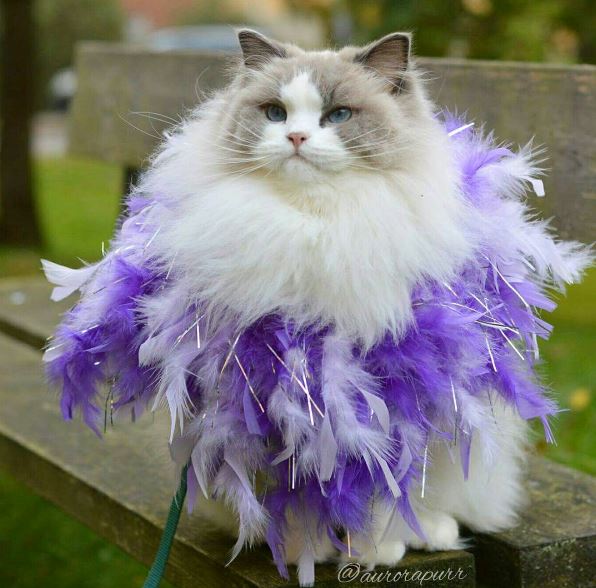 Ragdolls have nice manners and are easy to live with. You will find a Ragdoll on your sofa or bed, but generally not much higher than that.