Adorable pictures of pets and their toys - Mundo EN
Animals

Adorable pictures of pets and their toys

If you own a pet, you know how adorable they can be.  If they play with their own toys they can spend hours keeping themselves entertained, and we’re just going to enjoy watching them while they do it.

Look at the following pictures to get your daily dose of cuteness!

It’s the simple things in life that make us happy

This cat proved us he doesn’t need much in life to be happy. He can have fun with anything! 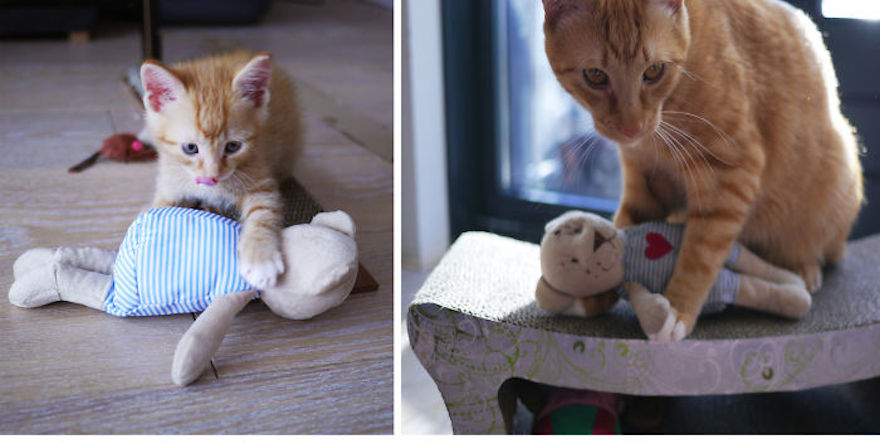 In these pictures, you can see that the cat and his toy look as close as they were in the beginning.

Look at this little kitten and its dinosaur toy; it looks like they’re the closest friends ever! 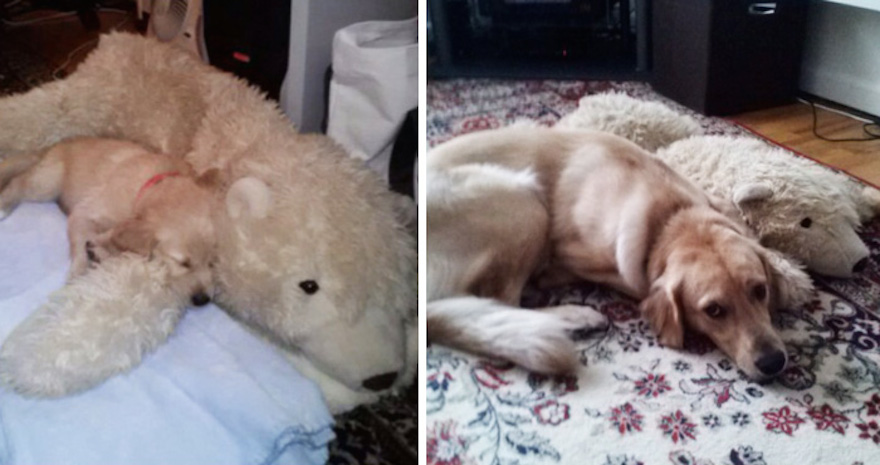 Look at this before and after picture of this Golden Retriever. Hey buddy, aren’t you a bit old to be playing with your teddy bear? 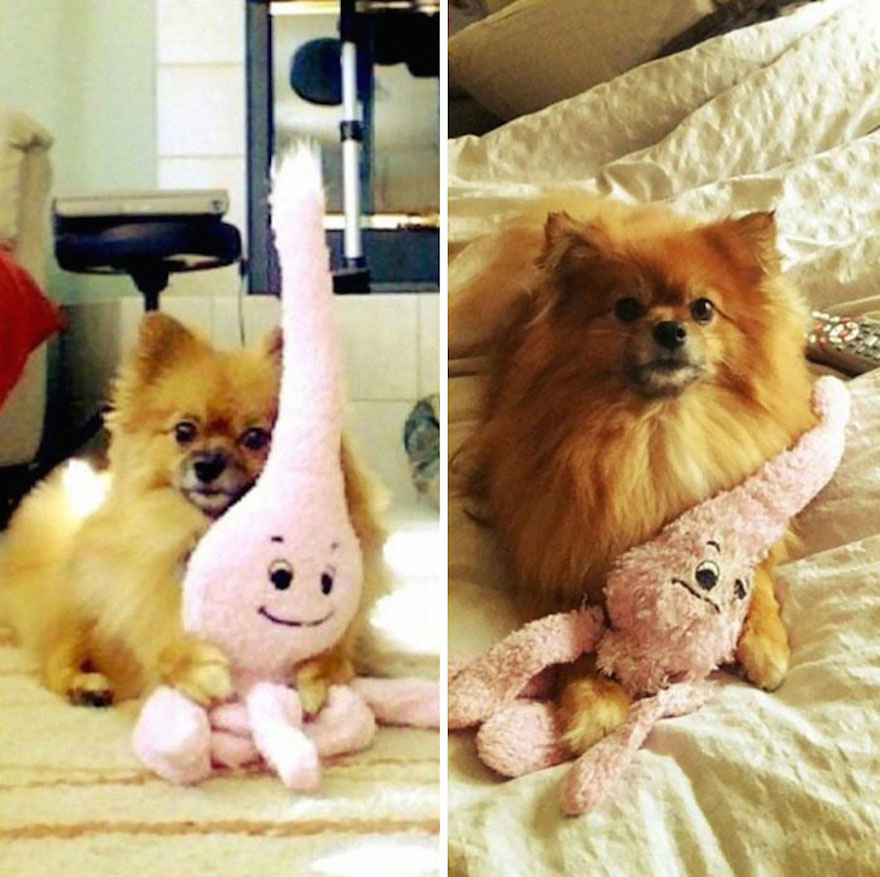 Dogs love chewing their toys. This picture of the brown Pomeranian holding his pink octopus is way too adorable.

Friends since the beginning 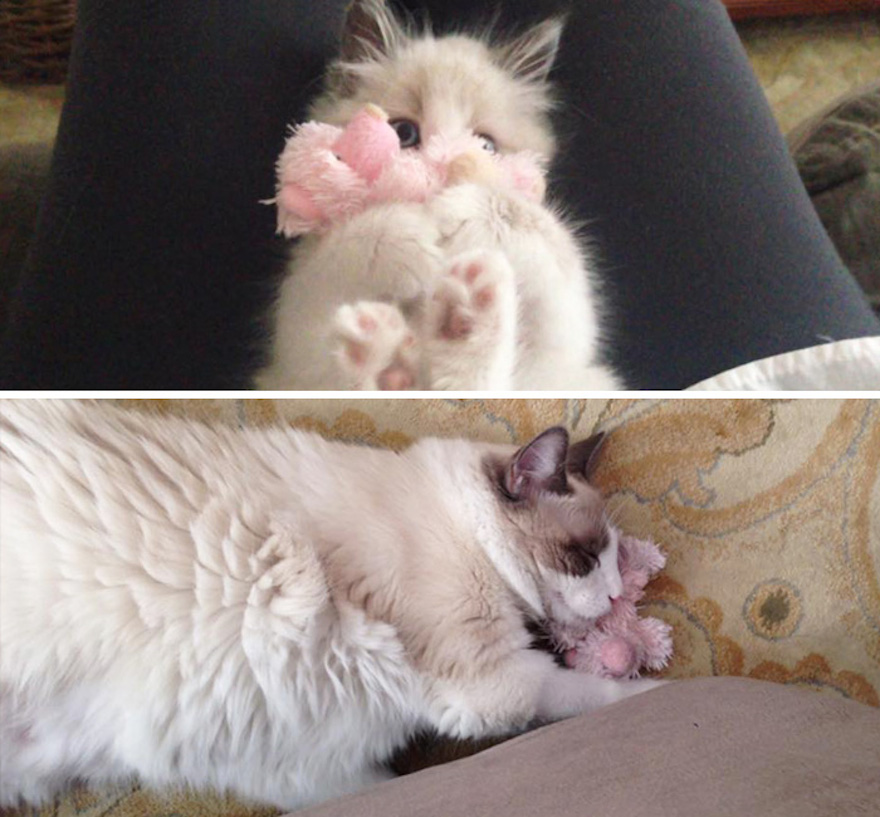 This picture taken of the kitten with his toy proves they were friends since the early days. Buying your pet a toy will always be a great idea. 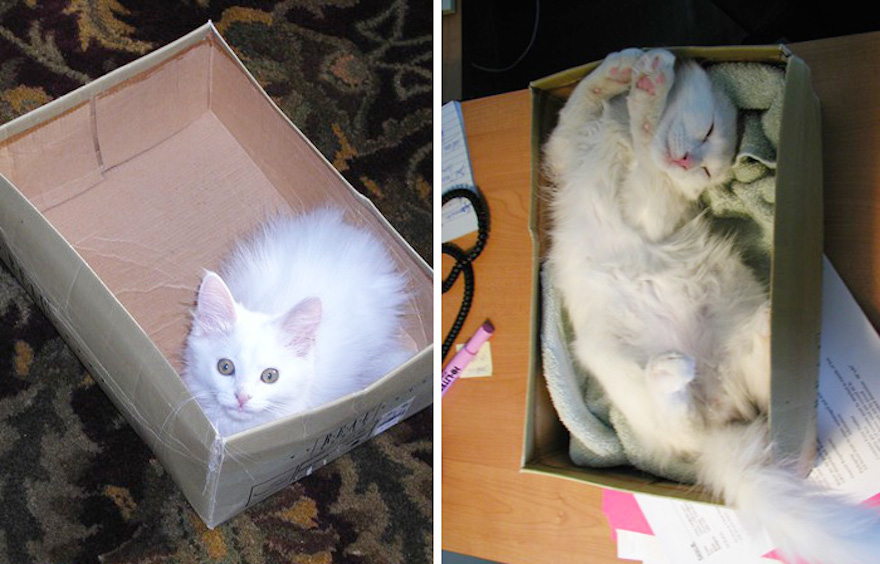 This cat is way too adorable; he doesn’t need a fancy toy. It’s obvious that he loves this box and he feels completely comfortable in it. 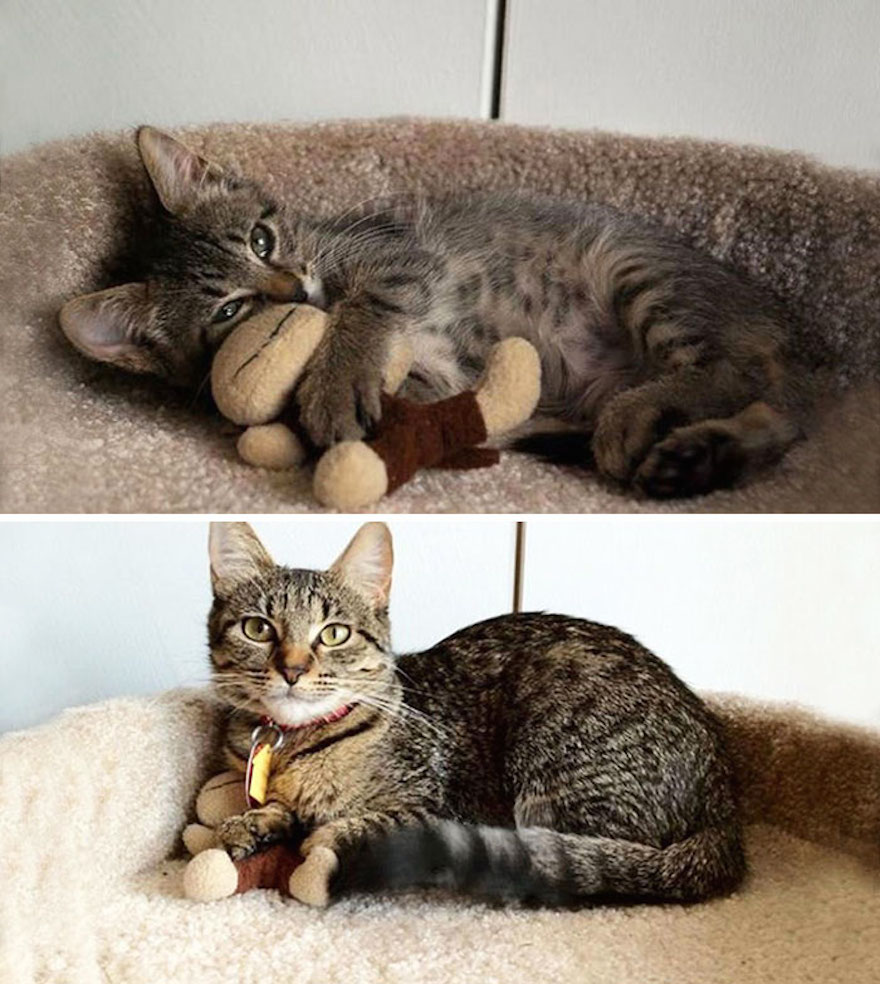 This cat proves us that he’s the most loyal friend ever. Since he was a little kitten he’s friends with this monkey toy. 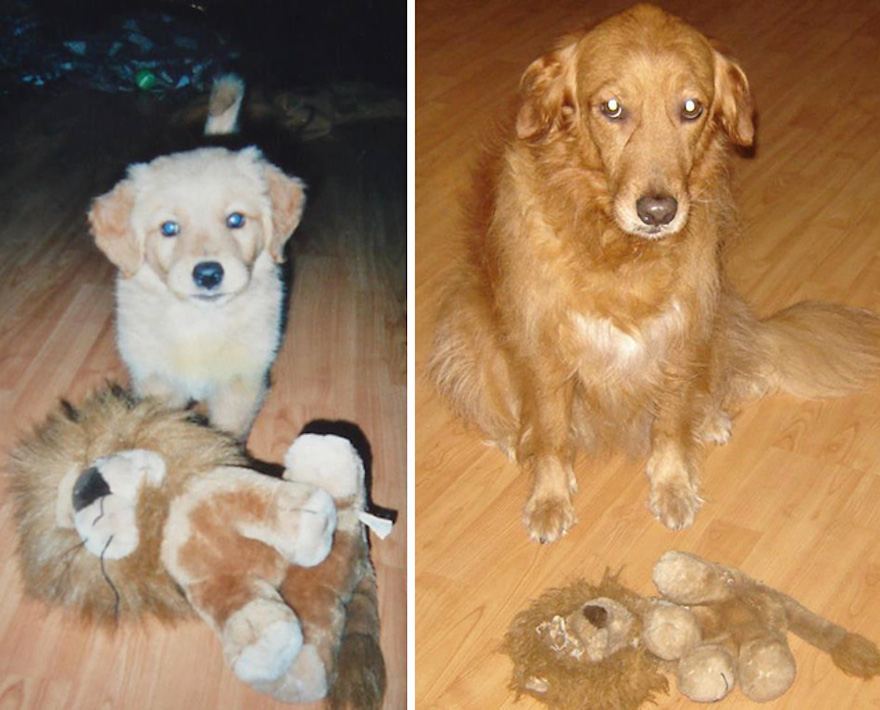 This Golden Retriever’s toy was bigger than him when he was a puppy. Now look at the picture to the right, he’s gotten ten times bigger!

This cat and his little monkey 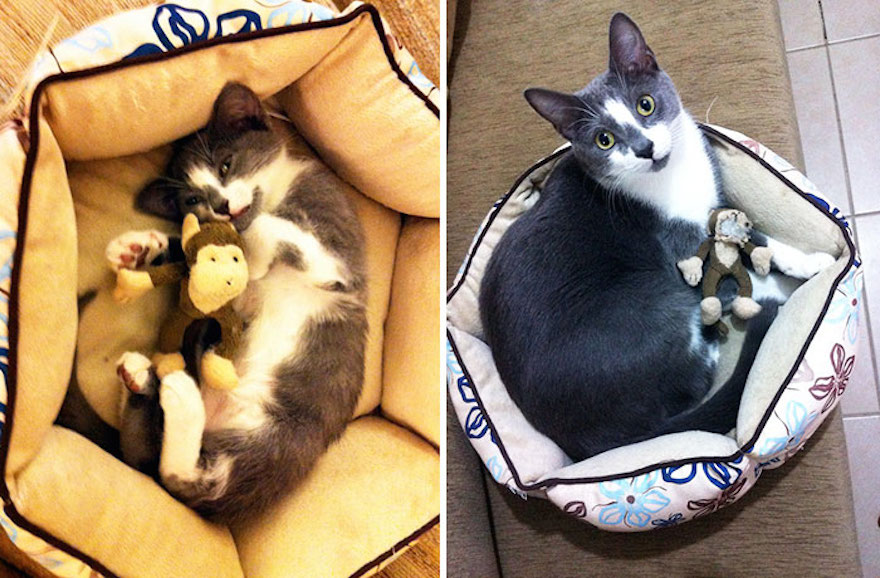 These photos of the cat and his monkey friend don’t change much, except for the fact that the monkey toy got a little hurt; let’s just hope it wasn’t his friend’s fault. 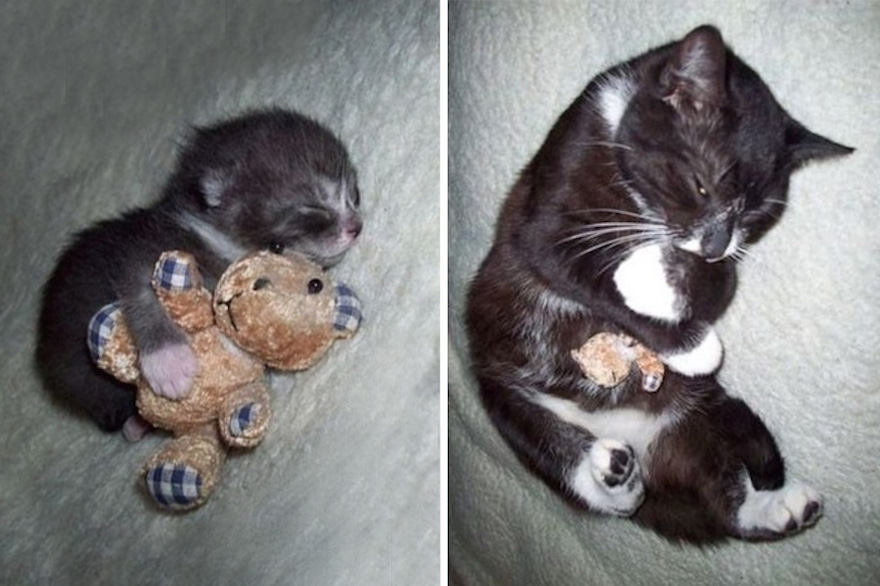 This picture of the tiny kitten and his teddy bear makes us smile. It’s so obvious that the kitten loves it very much because of the way he holds it so close. 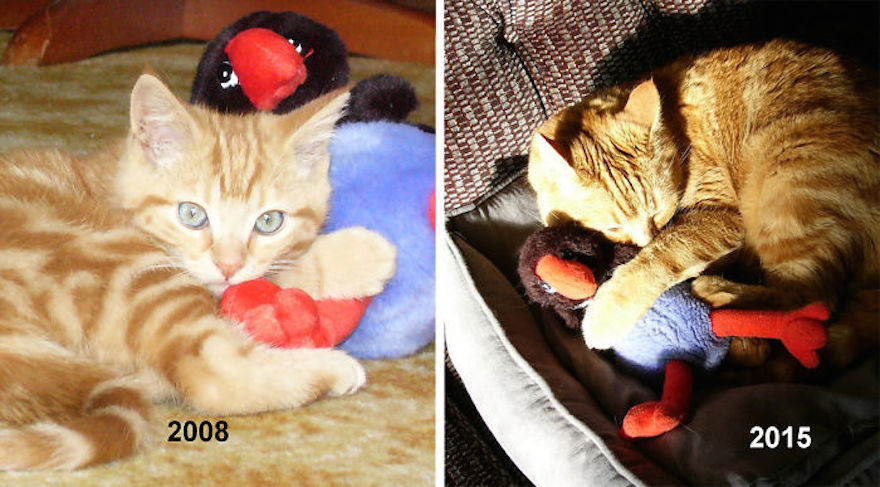 Look at this before and after picture of this cat and his toy. 7 years went by and they look like nothing’s changed between them.

That look on his face 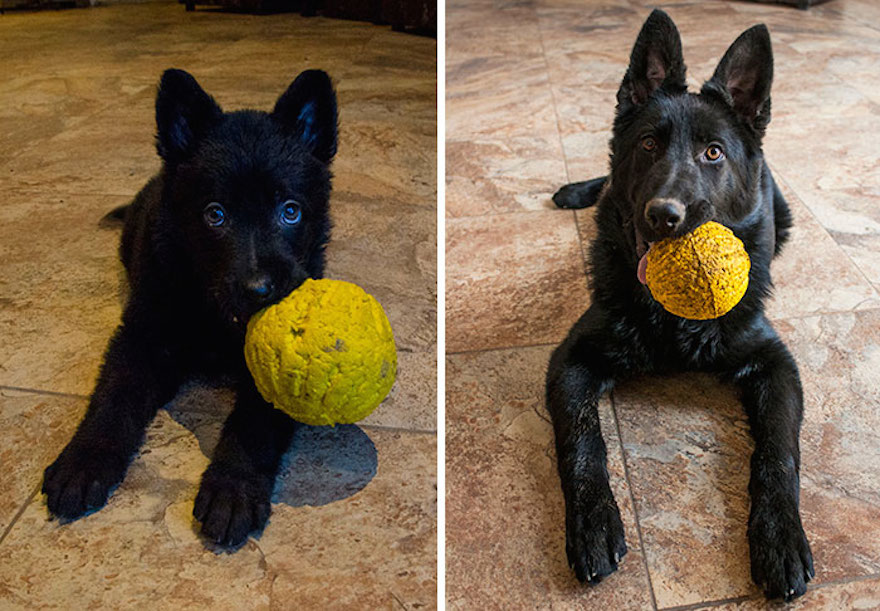 The look on this dog’s face hasn’t changed over the years. It seems he still has fun with that old yellow toy. 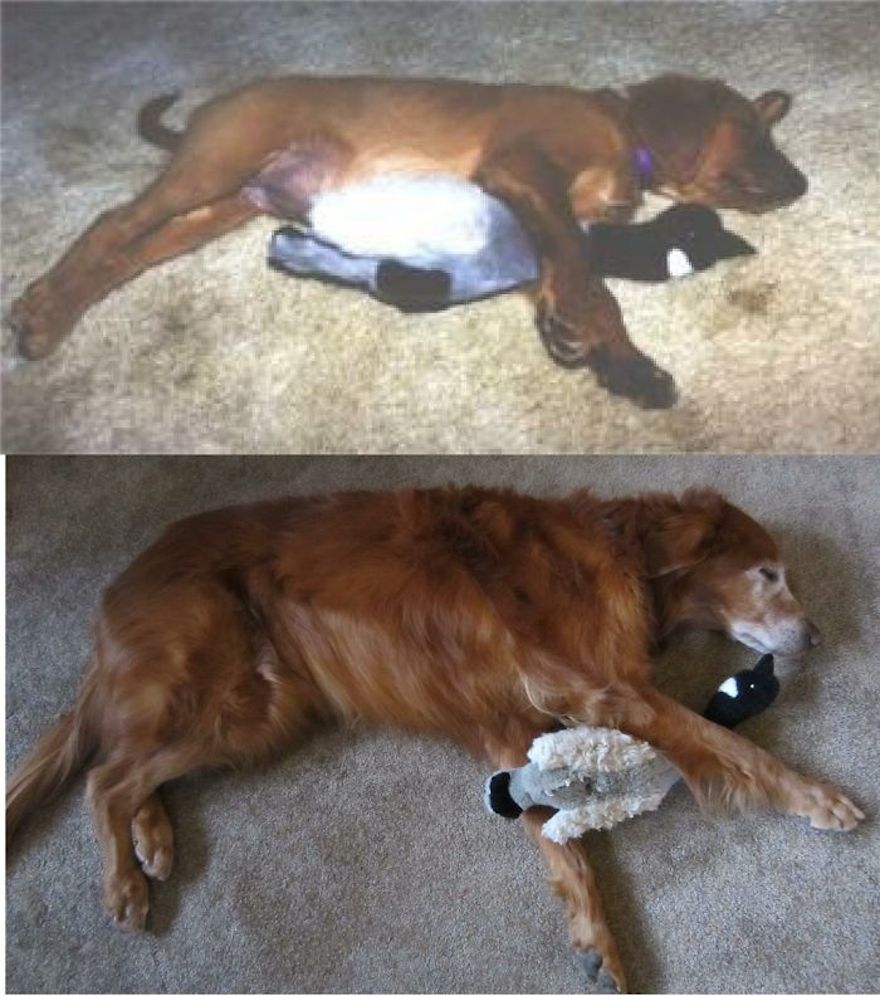 This before and after picture of the Golden Retriever proves us that it doesn’t matter how old he is now, the love he feels for his toy is unmeasurable. 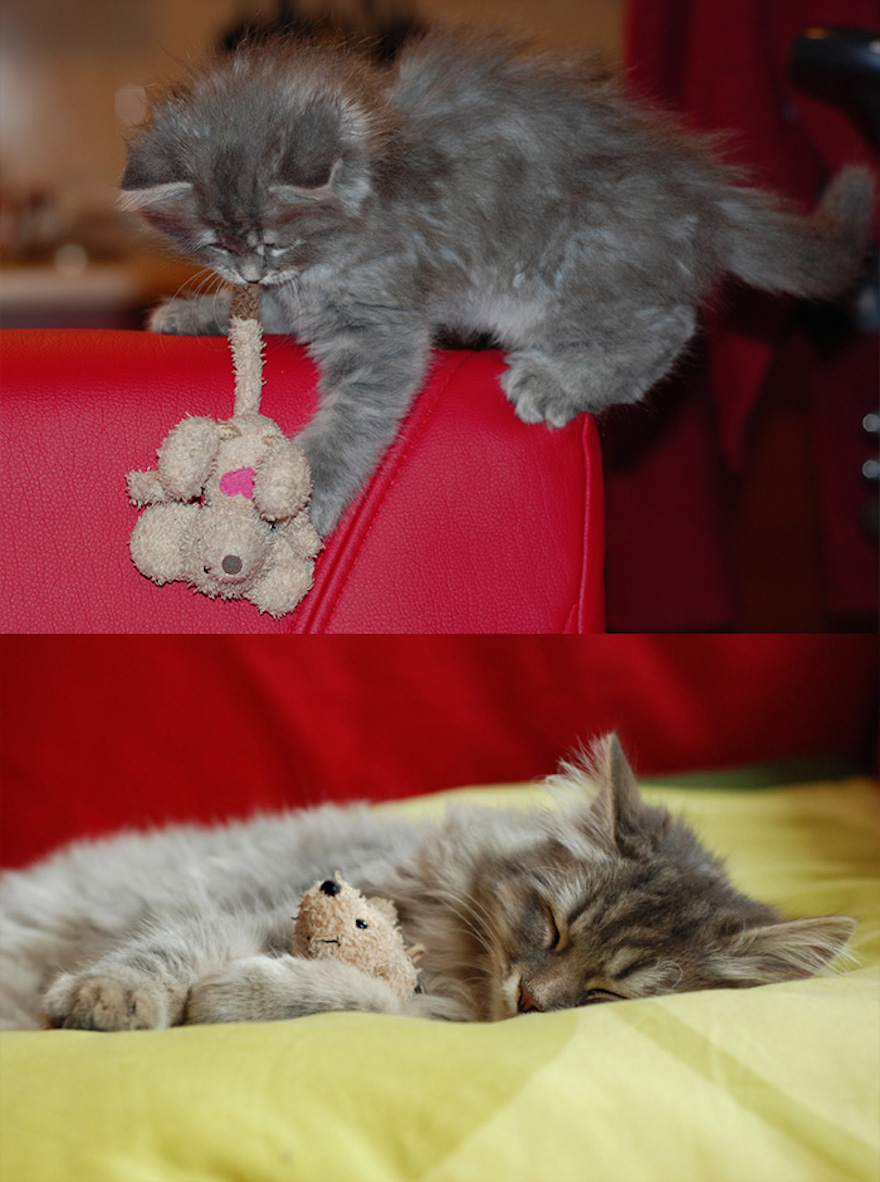 This gray cat and his toy share all their time together, it doesn’t matter if it’s play time or sleeping time.

This cat hasn’t changed much 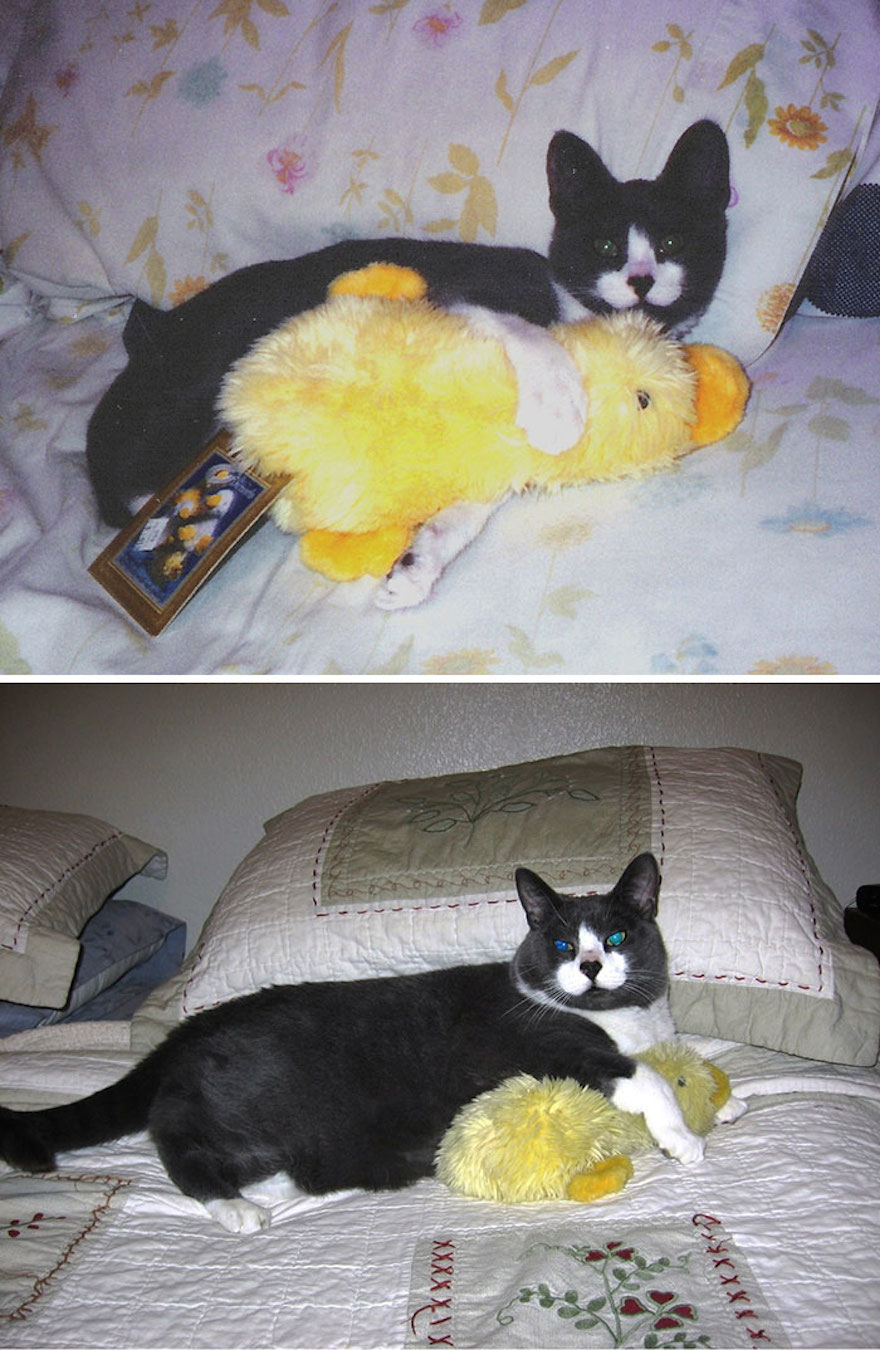 It looks like the cat hasn’t changed much except for the fact that he put some weight on, but his love for the duck teddy toy is still the same!

He’s addicted to his teddy bear 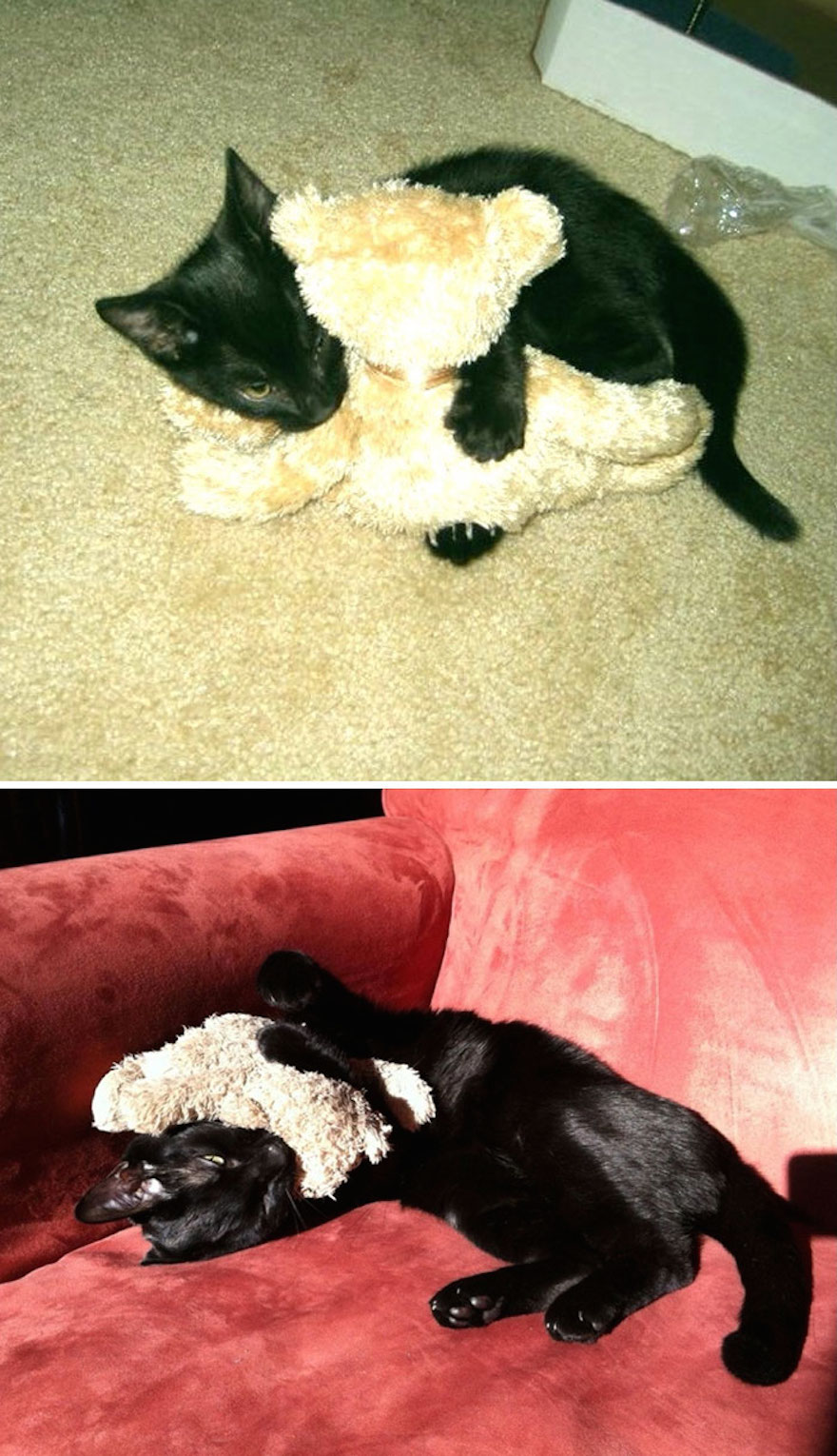 Who said black cats bring bad luck? Just by looking at these buddies, it’s impossible to think this cat can do you any harm. 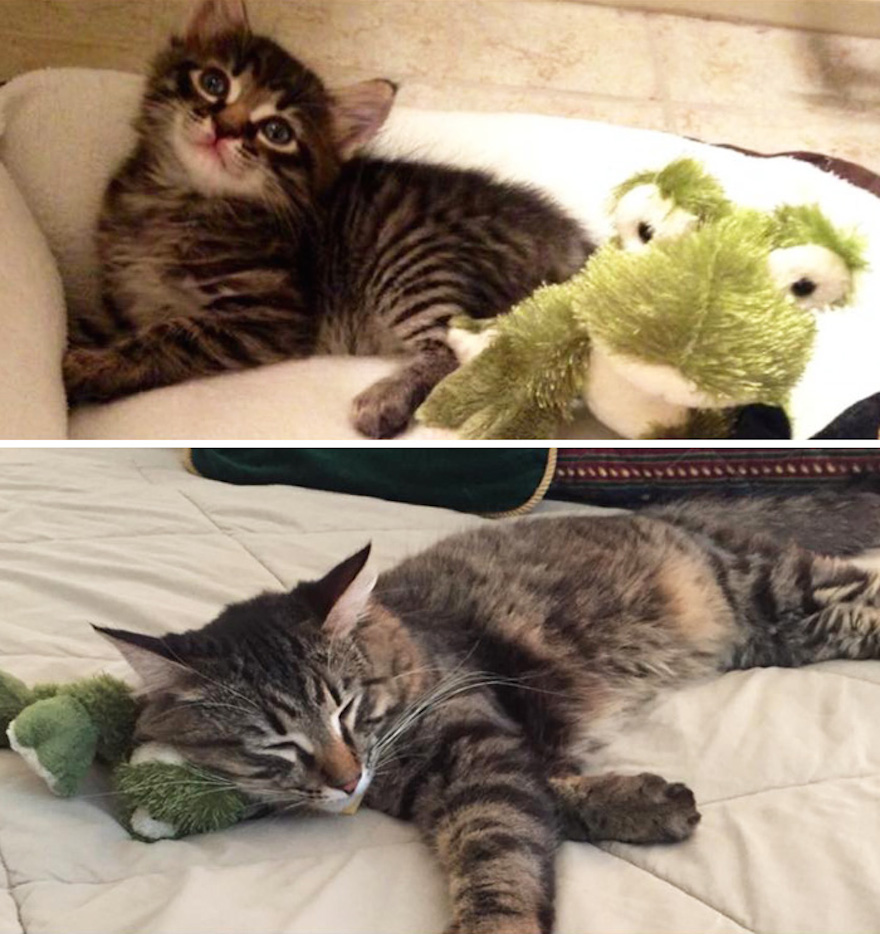 In the first picture, it looks as if they’re both posing for the picture. In the one below it seems he’s using his toy as his pillow, how cute! 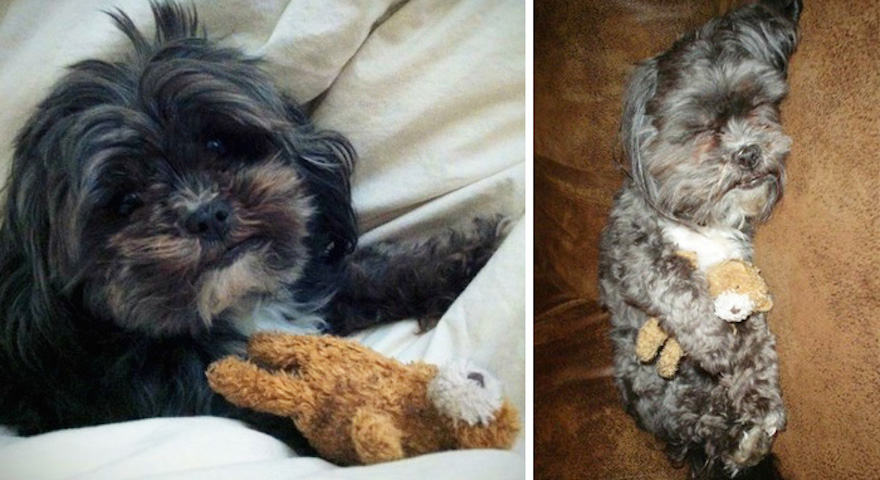 This dog and his friend both look like toys, we can imagine the cat’s owner enjoy cuddling with these little friends. 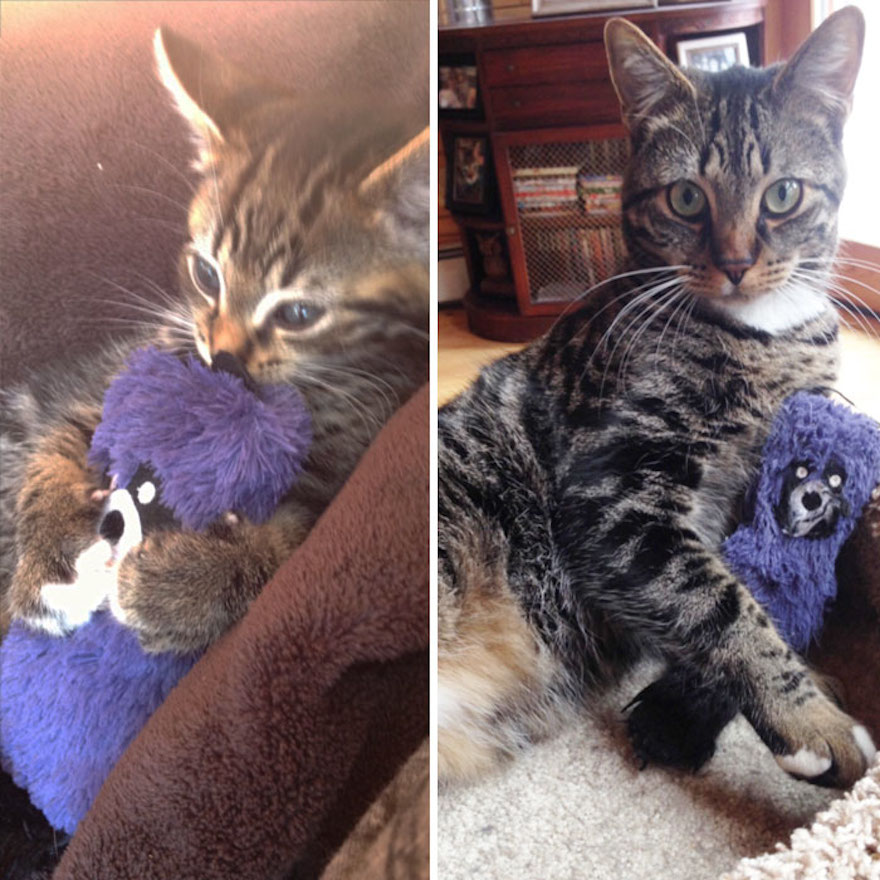 This is a funny picture because of how the cat holds its toy and the way his purple toy looks.